Malignant pleural mesothelioma (MPM) is an aggressive form of cancer arising from the pleural mesothelium (Figure 1). Although relatively rare, the incidence of MPM is expected to peak in many developed nations over the coming decade (1,2). Medical management of MPM has been limited by modest responses to modern chemotherapeutic agents and radiotherapy alone (3,4). Surgical options for patients with MPM can be divided into those with a palliative intent and those with a curative intent. In the latter group, patients who are deemed to have resectable disease can be offered surgical procedures such as extrapleural pneumonectomy (EPP) or extended pleurectomy/decortication (P/D) that aim to achieve macroscopic clearance and maximal cytoreduction. 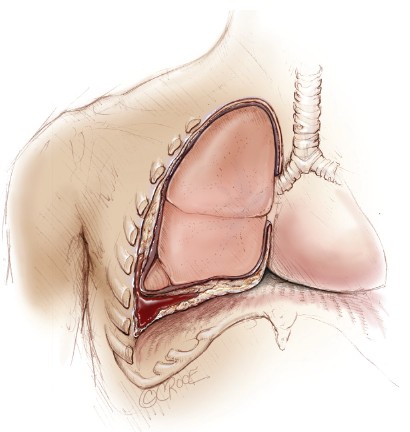 Figure 1 Malignant pleural mesothelioma is a primary neoplasm originating from the mesothelial cells that may be associated with dyspnea, pleural effusion and/or chest pain

An international consensus report recently concluded that more surgeons believed EPP could provide adequate cytoreduction compared to extended P/D (90% vs. 68%) (5). In most specialised centres, EPP is now routinely performed as part of a trimodality treatment (TMT) regimen involving neoadjuvant or adjuvant chemotherapy, surgery and adjuvant radiotherapy. Despite encouraging results from institutional reports, a number of studies comparing EPP to less invasive procedures have questioned the merit of this surgical technique, and the evidence for TMT remains controversial according to current guidelines (6-8). The primary aim of the present systematic review was to assess the safety and efficacy of TMT involving EPP, and to identify its role in the surgical management of patients with MPM.

Electronic searches were performed using Ovid Medline, Cochrane Central Register of Controlled Trials (CCTR), Cochrane Database of Systematic Reviews (CDSR), ACP Journal Club, and Database of Abstracts of Review of Effectiveness (DARE) from January 1985 to October 2012. To achieve the maximum sensitivity of the search strategy and identify all studies, we combined the terms “mesothelioma” and “pneumonectomy” as either key words or MeSH terms. The reference lists of all retrieved articles were reviewed for further identification of potentially relevant studies. All identified articles were systematically assessed using the inclusion and exclusion criteria.

Eligible studies for the present systematic review included those in which patients with histologically proven MPM were treated by EPP, neoadjuvant or adjuvant chemotherapy, and adjuvant radiotherapy. All forms of systemic chemotherapy and radiotherapy were included. For studies that included patients who underwent TMT as a subset of patients who had other treatment regimens, results for patients who underwent TMT were extracted when possible. When centres have published duplicate trials with accumulating numbers of patients or increased lengths of follow-up, only the most complete reports were included for qualitative appraisal at each time interval. It is acknowledged that patient selection for TMT varied amongst institutions and sometimes within an institution at different time periods. All publications were limited to human subjects and in English language. Abstracts, case reports, conference presentations, editorials and expert opinions were excluded. Review articles were omitted due to potential publication bias and possible duplication of results. Studies that included fewer than twenty patients intended for treatment in prospective studies or who underwent EPP in retrospective studies were also excluded.

All data were extracted from article texts, tables and figures. Two investigators (D.T. and P.M.) independently reviewed each retrieved article. Discrepancies between the two reviewers were resolved by discussion and consensus. The final results were reviewed by the senior investigators (C.C. and T.D.Y.).

Quantity and quality of trials

A total of 502 references were identified through the five electronic database searches. A summary of the study selection process is summarized in Figure 2. After inclusion of 12 studies from other sources and exclusion of duplicate references, 487 potentially relevant articles were retrieved for more detailed evaluation. After applying the selection criteria, 226 studies remained for assessment. Manual search of the reference lists did not identify any additional relevant studies. Full articles were obtained and further evaluated. Of the 16 studies included for final analysis in the present systematic review, one study was a feasibility-testing randomized controlled trial, 5 were prospective series, and the remainder were from retrospective observational studies, as summarized in Table 1A,1B (7-22). 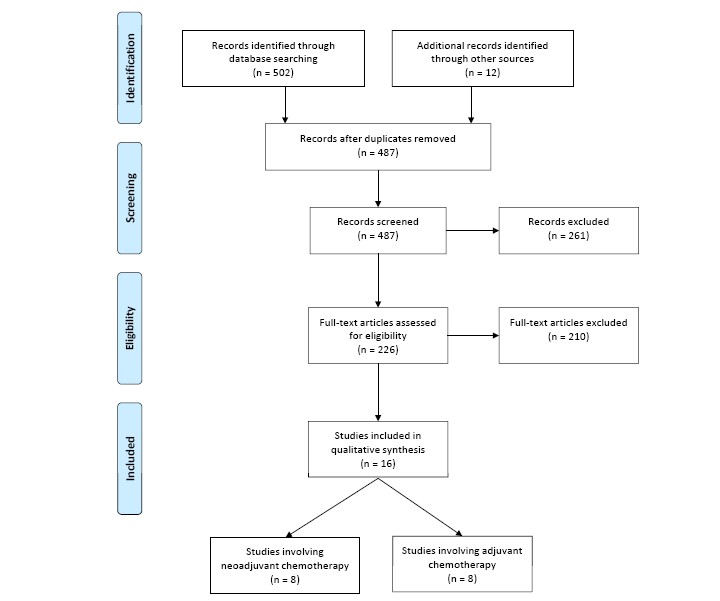 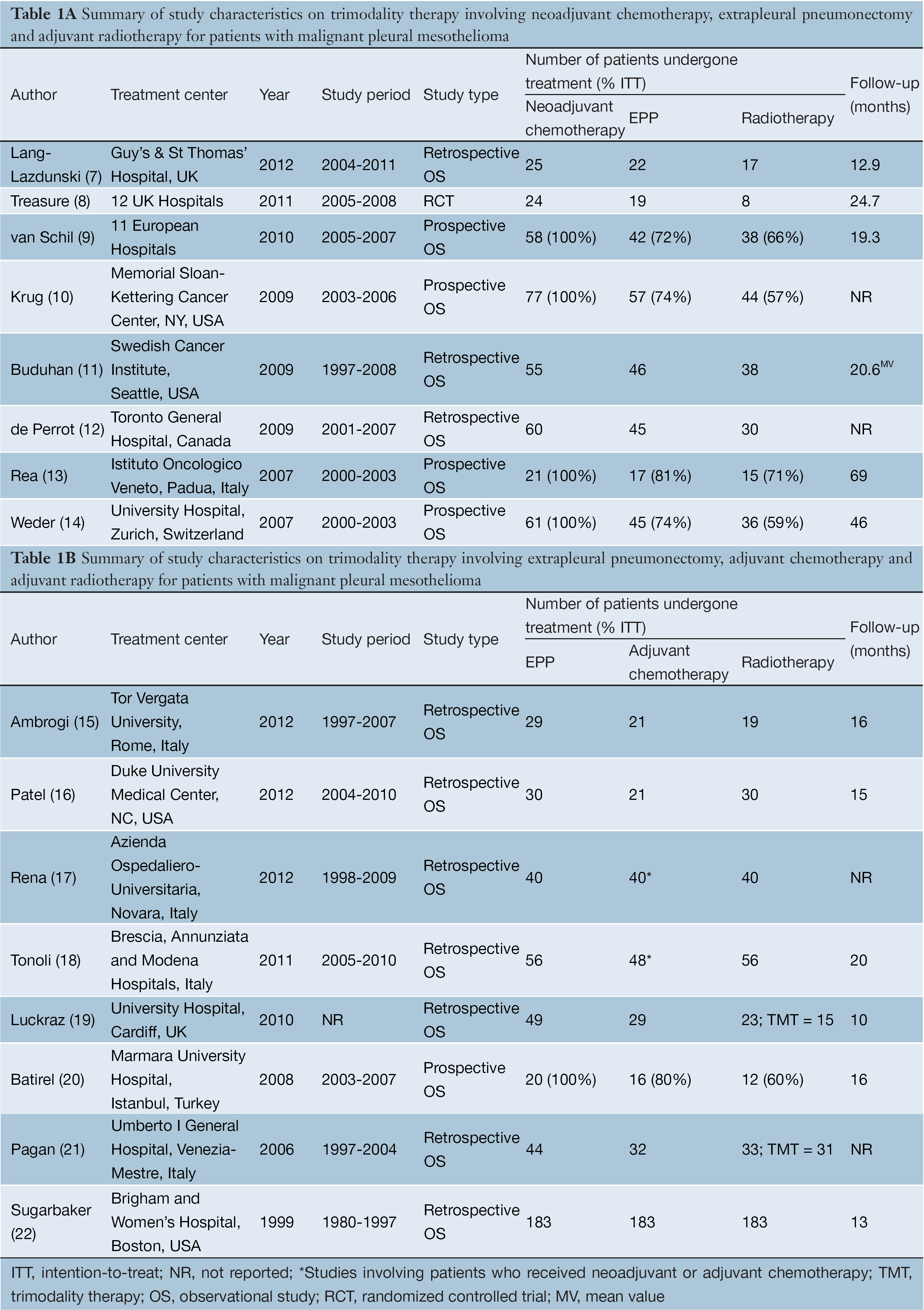 A summary of median overall survival outcomes is presented in Table 2. In studies involving neoadjuvant chemotherapy, the definition of overall survival differed between institutions, with some centres calculating survival from the date of diagnosis (7,11), randomization (8), registration (9) or commencement of chemotherapy (10,12-14). In this group, four prospective studies reported a median overall survival of 16.8-25.5 months on intention-to-treat analysis (9,10,13,14). A randomized controlled trial reported a median survival of 14.4 months from 24 patients who were randomized to undergo EPP (8). Ten patients in this trial were also included in a retrospective institutional report, which presented a median overall survival of 12.8 months from the date of diagnosis (7). In studies involving adjuvant chemotherapy, the majority of studies reported survival from the date of EPP (15,16,18,19,21,22). but not specified in others (17,20). In this group, apart from one multi-centre retrospective study reporting a median survival of 46.9 months, the remaining studies reported median survival periods of 19-24 months (15-17,19-22). 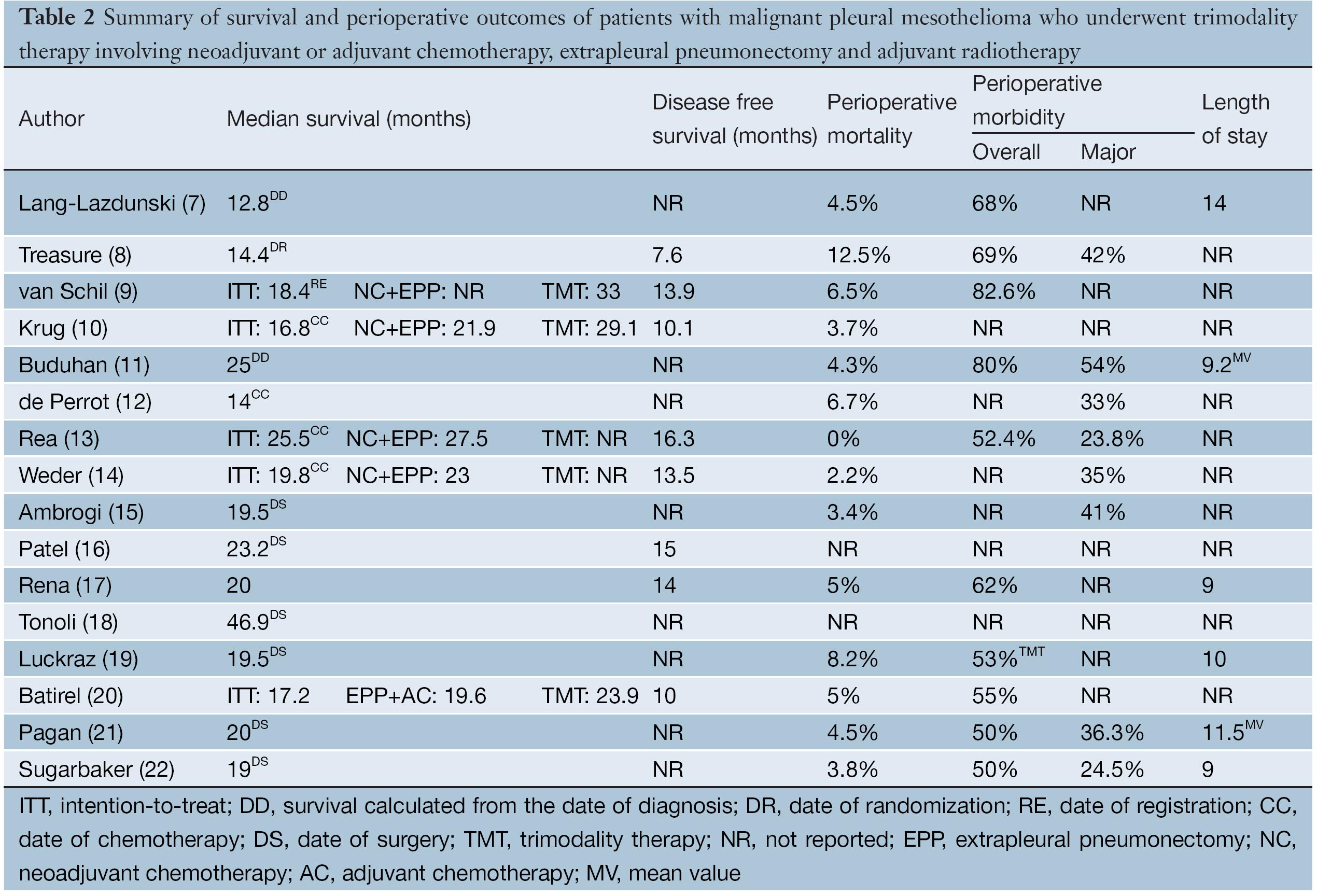 In studies involving neoadjuvant chemotherapy, four prospective series had standardized regimens (9,10,13,14), whilst the remaining retrospective reports (7,11,12) and the randomized controlled trial (8) had variable treatment combinations. Studies on TMT involving adjuvant chemotherapy also reported inconsistent therapeutic regimens. The form of adjuvant radiotherapy also differed between institutions, with the introduction of intensity modulated radiotherapy (IMRT) in some centres in recent years (11,12,16,18). The reporting of local disease recurrence ranged from 4-41%, distant recurrence ranged from 5-65%, and overall disease recurrence ranged from 27-84%. However, duration and methodology of follow-up varied between institutions. A summary of chemotherapy and radiotherapy regimens and patterns of disease recurrence are presented in Table 3A,3B. 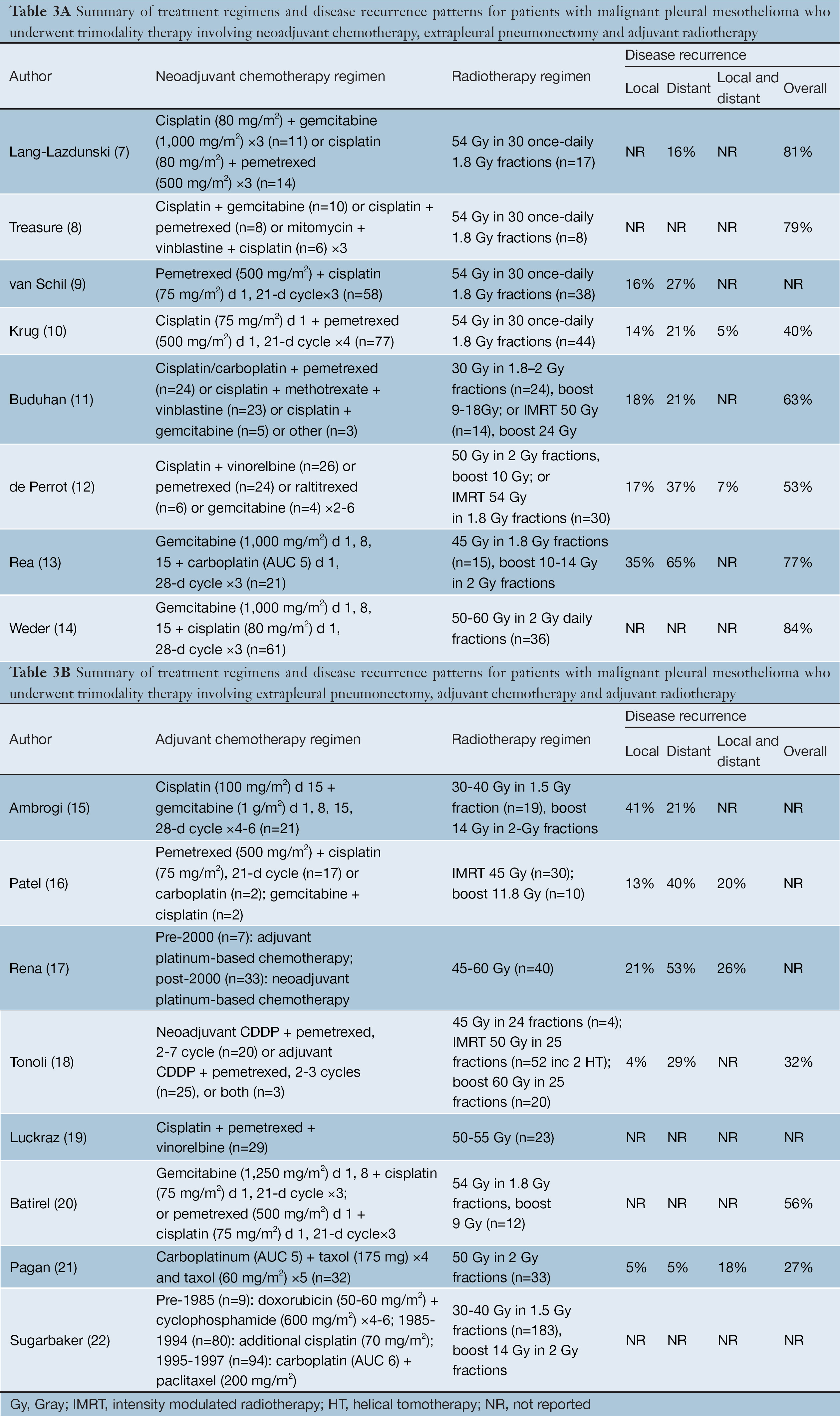 The necessity of adjuvant therapy with EPP was identified by Eric Butchart in the 1970s, when he stated in a personal communication that “we have recently analysed our experience with both pleuropneumonectomy and pleurectomy/decortication for mesothelioma. The very strong message from this analysis is that adjuvant therapy is essential in order to achieve any degree of long term survival with either surgical procedure” (23). In his original report of 29 patients who underwent EPP, there was a perioperative mortality rate of 31%, a perioperative morbidity rate of 45%, and a median survival of merely 10 months (24). Since then, improvements in surgical techniques and perioperative care, as well as advances in medical and radiation oncology, have resulted in significantly superior outcomes in patients treated by TMT (10,12). In addition, an improved understanding of the important prognostic factors and a refinement of the patient selection process have helped to identify patients who may benefit most from aggressive therapy and avoid futile treatment in patients who are unsuitable surgical candidates (25).

Over the last decade, a number of improvements have been developed in adjuvant therapy for MPM in combination with EPP. A randomized controlled trial by Vogelzang et al. has established pemetrexed and cisplatin as the accepted first-line chemotherapy regimen for MPM in many centres (3,27). More recently, the emergence of biological and immunotherapy agents have gained intense interest, with a number of Phase I trials currently under investigation (28,29). Advances in radiation oncology in the form of IMRT have resulted in further improvements in overall survival (11,16,27,30). Compared to other surgical options, EPP allows higher doses of radiotherapy to the hemithorax by avoiding pulmonary toxicity, and this approach has demonstrated a significant reduction in loco-regional relapses (30). Modern techniques such as helical tomography allow the delivery of superior dose homogeneity in the target volume whilst minimizing radiation to the normal critical structures such as the spinal cord, heart, oesophagus and liver. The improved outcomes of patients who underwent TMT involving modern radiation oncology treatment was presented by Tonoli and colleagues, who reported a median survival of 46.9 months for patients who underwent IMRT with a median dose of 52 Gy (18).

Overall, the present systematic review identified 16 studies on TMT involving neoadjuvant or adjuvant chemotherapy, EPP and adjuvant radiotherapy according to predefined criteria, including one randomized controlled trial and five prospective series. Studies on TMT involving EPP, adjuvant chemotherapy and radiotherapy were mostly retrospective reports with non-standardized chemotherapy regimens. In comparison, studies involving neoadjuvant chemotherapy, EPP and adjuvant radiotherapy were relatively more recent, mostly including patients treated after year 2000. Four prospective studies involving patients treated by a standardized neoadjuvant chemotherapy regimen, EPP and adjuvant radiotherapy reported a median survival of 16.8-25.5 months, with a perioperative mortality of 0-5% (9,10,13,14). In these four studies, the majority of patients (57-71%) were able to complete the trimodality therapy on an intention-to-treat analysis. In contradistinction, the Mesothelioma and Radical Surgery (MARS) trial reported a median survival of 14.4 months for the 24 patients randomized to undergo EPP, of whom 10 were reported in another study by Lang-Lazdunski et al. (7,8) Investigators of the MARS trial pointed out that survival outcomes were calculated from the later timepoint of randomization, with a median period of 3.6 months after the registration process. The primary intent of this trial was to assess the feasibility of conducting a randomized controlled trial for EPP in the management of MPM. However, the study design and subsequent data analysis have met significant criticism (31,32). Major points of contention include the speculative conclusions drawn from a feasibility-testing study, the non-standardized chemotherapy agents and timing of chemoradiation, limited numbers of recruited patients and significant protocol violations between the two treatment arms. Indeed, with a mortality rate of 18% for the 17 patients who underwent EPP per protocol, it represents one of the highest mortality rates for EPP in the current literature (27,31). Despite this, investigators from the MARS trial are considered to have the unique opportunity to perform a definitive therapeutic trial that could assess the efficacy of EPP compared to medical management (32). Of the remaining studies within the present systematic review, the perioperative mortality ranged from 0-8.2%, with a wide range of perioperative morbidity and disease recurrence outcomes, partly due to non-standardized reporting.

In conclusion, the present systematic review has shown that EPP for patients with MPM can be performed with an acceptable perioperative mortality rate in specialized centres. However, the evidence for long-term survival in patients treated by TMT in the current literature is inconsistent. A number of prospective studies with standardized therapeutic regimens have reported relatively favourable outcomes on intention-to-treat analysis. These encouraging results demonstrate the potential benefit TMT can offer for patients treated by a multi-disciplinary approach in well-integrated programs. Conversely, one randomized controlled trial reported relatively poor perioperative and long-term outcomes for patients randomized to EPP (8). Investigators of the MARS trial should be commended for their efforts in demonstrating the feasibility of conducting a randomized study on EPP versus conservative treatment. However, further evidence is required before definitive conclusions can be drawn about the efficacy of this surgical procedure. the present study is limited by potential publication bias, and it should be acknowledged that the majority of data presented have been obtained from tertiary centres with a special interest in the surgical management of MPM. Hence, these results should be interpreted with caution and may not be applicable to non-specialized institutions.