The introduction of sutureless and rapid deployment aortic valve replacement (SURD-AVR) (1) has advanced the surgical treatment of aortic valve disease by facilitating the valve implantation process, reducing operative durations and promoting minimally invasive surgery (2,3) SURD-AVR has been associated with promising results in patients of all risk categories (4) and demonstrated improved valve hemodynamics when compared with conventional aortic valve replacement (c-AVR) (5,6). Conduction disorders requiring permanent pacemaker (PPM) implantation have emerged as a noteworthy complication associated to SURD-AVR interventions (6-9). In recent multicenter series, the prevalence of PPM in patients undergoing SURD-AVR ranges from 7.7% to 10.4% compared with 3.3–3.7% for those undergoing c-AVR (8,10,11). Given their recent development, SURD technologies have been demonstrated to be strongly influenced by the ‘learning curve effect’, with improving outcomes over time (10). Data from the Sutureless and Rapid Deployment International Registry (SURD-IR) demonstrated a substantial reduction in the rate of PPM over time, from 20.6% to 5.6% (2). Currently, only scarce data are available regarding the risk factors of new conduction abnormalities and PPM implantation after surgical AVR and the real impact of SURD valves prostheses remains to be clarified. The aim of this study was to evaluate the incidence, predictors and clinical outcomes of conduction disorders and PPM placement after surgical AVR.

Between September 2016 and December 2018, data from 243 consecutive patients who underwent minimally invasive aortic valve replacement in our institution were prospectively collected. Of these, 103 (42.4%) underwent SURD-AVR and 140 (57.6%) underwent c-AVR. Preoperative, intraoperative and postoperative data were stratified by the type of intervention (SURD-AVR vs. c-AVR) and the results were presented using statistical methods controlling for treatment-selection bias (propensity score analysis). Patients were excluded if they had preoperative active endocarditis, a permanent pacemaker, complete heart block on electrocardiogram (ECG), emergency surgery or any concomitant surgical procedure. ECGs were recorded every day in the intensive care unit (ICU) and in the sub-intensive care unit, the day of transfer to the regular ward and at discharge, unless otherwise stated because of any alteration from the basal rhythm or angina. All patients had continuous telemetry monitoring for at least the first 5 days after the operation or for a longer period if needed. Antiarrhythmic therapy was recorded every day from the admission to the discharge. Occurrence of new conduction abnormalities was assessed from the final ECG, at discharge, or from the ECG before PPM implantation. All ECGs were analyzed by two independent physicians (FV and LM) and the diagnosis of conduction disorders was based on the current recommendations (12).

Following the procedure, the decision to perform PPM implantation was made by an experienced cardiac electrophysiology specialist team in accordance with European Society of Cardiology guidelines on cardiac pacing and cardiac resynchronization therapy (13). The primary endpoints were the occurrence of new-onset conduction disorders within 30 days of the intervention, defined as first-degree atrioventricular (AV) block, advanced AV block requiring PPM implantation, left bundle branch block (LBBB), right bundle branch block (RBBB) and left anterior fascicular block (LAFB). Secondary endpoints were 1-year occurrence of PPM implantation, death from any cause and rehospitalization. The patients were followed by outpatients’ clinic and telephone calls. Follow-up was 100% completed. Patient-informed consent for treatment, data collection and analysis for scientific purposes was collected in all cases and the local Institutional Review Board approved the use of data for research.

Our multidisciplinary minimally invasive approach for AVR involving reduced chest incisions, with an expanded use of SURD valves, minimally invasive extracorporeal circulation (MiECC) systems and ultra fast track (UFT) anaesthesia followed by early physiotherapy and family contact in the intensive care unit (ICU), has been previously reported (14,15). In brief, following a 4–5 cm skin incision, an upper “J” ministernotomy extended to the 3rd or 4th right intercostal space (ICS) or a right anterior thoracotomy (ART) at the 2nd ICS was performed. The ascending aorta, the axillary or femoral arteries, were cannulated for cardiopulmonary bypass inflow and the right atrium or femoral vein for venous drainage. The right superior pulmonary vein was cannulated for left ventricle venting. The ascending aorta was gently clamped and blood cardioplegia was delivered in antegrade fashion via the aortic root or directly into the coronary arteries. Following aortotomy, the aortic cusps were removed and the annulus accurately decalcified. After proper sizing, a sutured or a rapid deployment—Intuity Elite (Edwards Lifesciences, Irvine, CA, USA)—or sutureless—Perceval S (LivaNova, London, UK)—valve was implanted. In patients receiving SURD-AVR annular decalcification was complete as for c-AVR and oversizing carefully avoided. Local anaesthetic infiltration of suture and drains sites was used for immediate postoperative pain relief in UFT-treated patients. Table extubation was performed if extubation criteria were fulfilled (14). After the operation, the patient was transferred to the ICU; mobilization and respiratory therapy as well as oral feeding were started 3–5 hours after surgery. If no complications occurred, the drains were removed and the patient was transferred to the sub-intensive care unit within 12 hours (16).

Continuous variables were expressed as mean ± standard deviation (SD) and categorical variables as percentages. Where continuous variables did not follow a normal distribution (tested using the Kolmogorov-Smirnov test for normality and Q-Q plots), the median and interquartile range (IQR) were reported. Missing data were not defaulted to negative, and denominators reflect cases reported. The Student t-test and Mann-Whitney U test were used for continuous variables. The Pearson chi-squared or Fisher exact test was used for categoric variables. Univariate analyses were performed to determine relationships between measured variables and occurrence of conduction disorders. AVR type and variables that achieved p values less than 0.05 in the univariate analyses (Table S1) were examined using multivariable analysis by Firth’s logistic regression to estimate the independent effects of risk factors for postoperative conduction disorders. 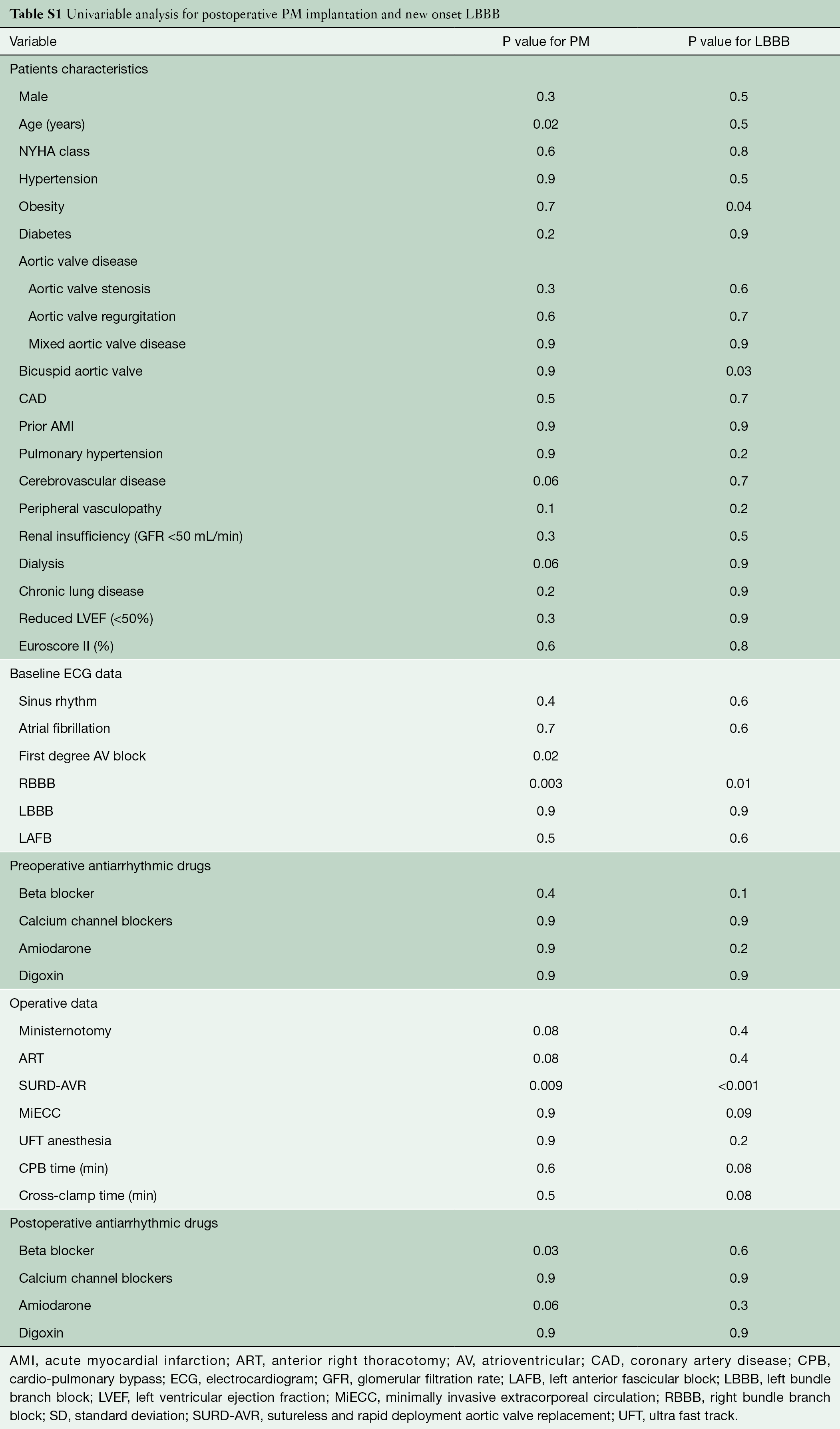 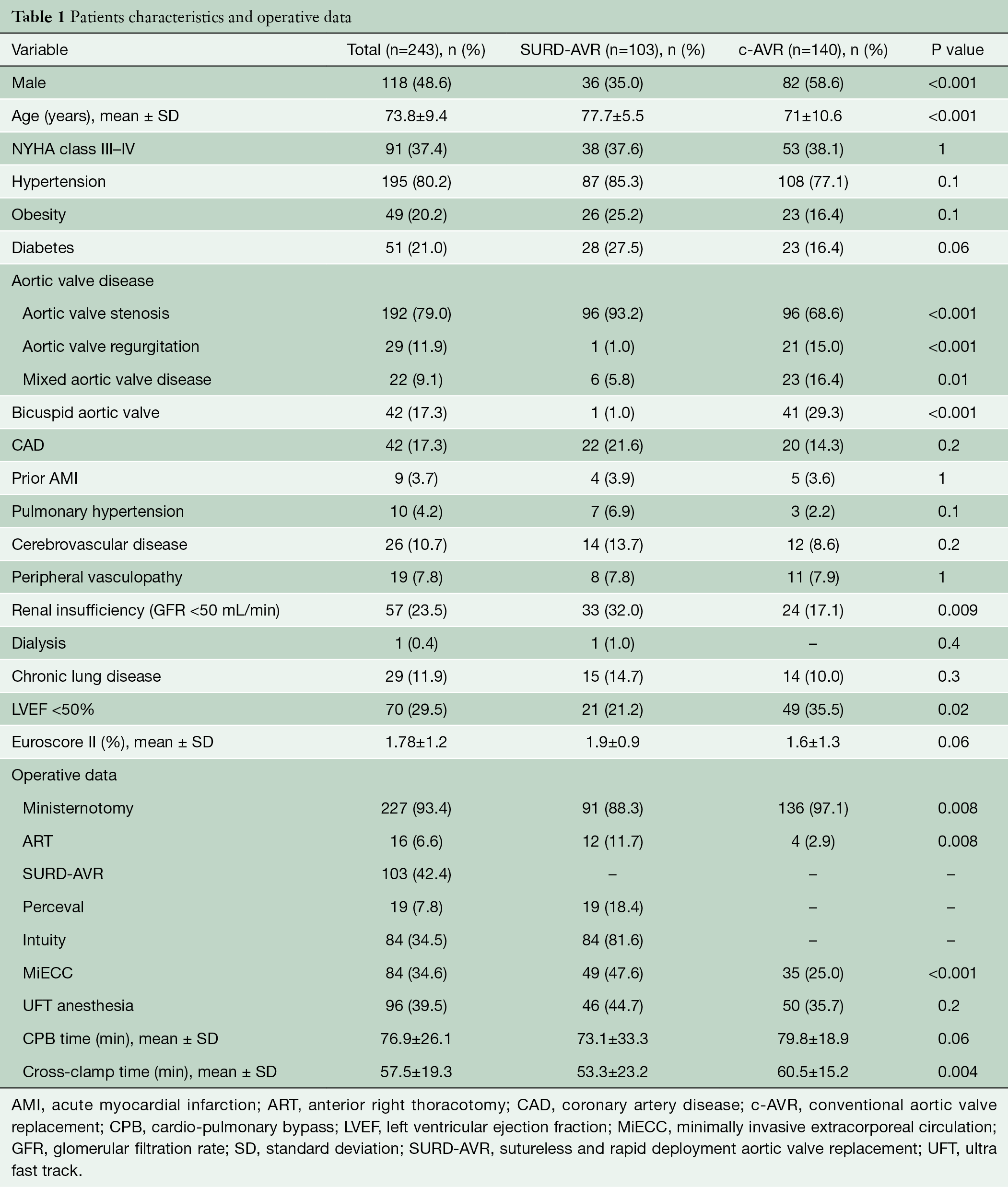 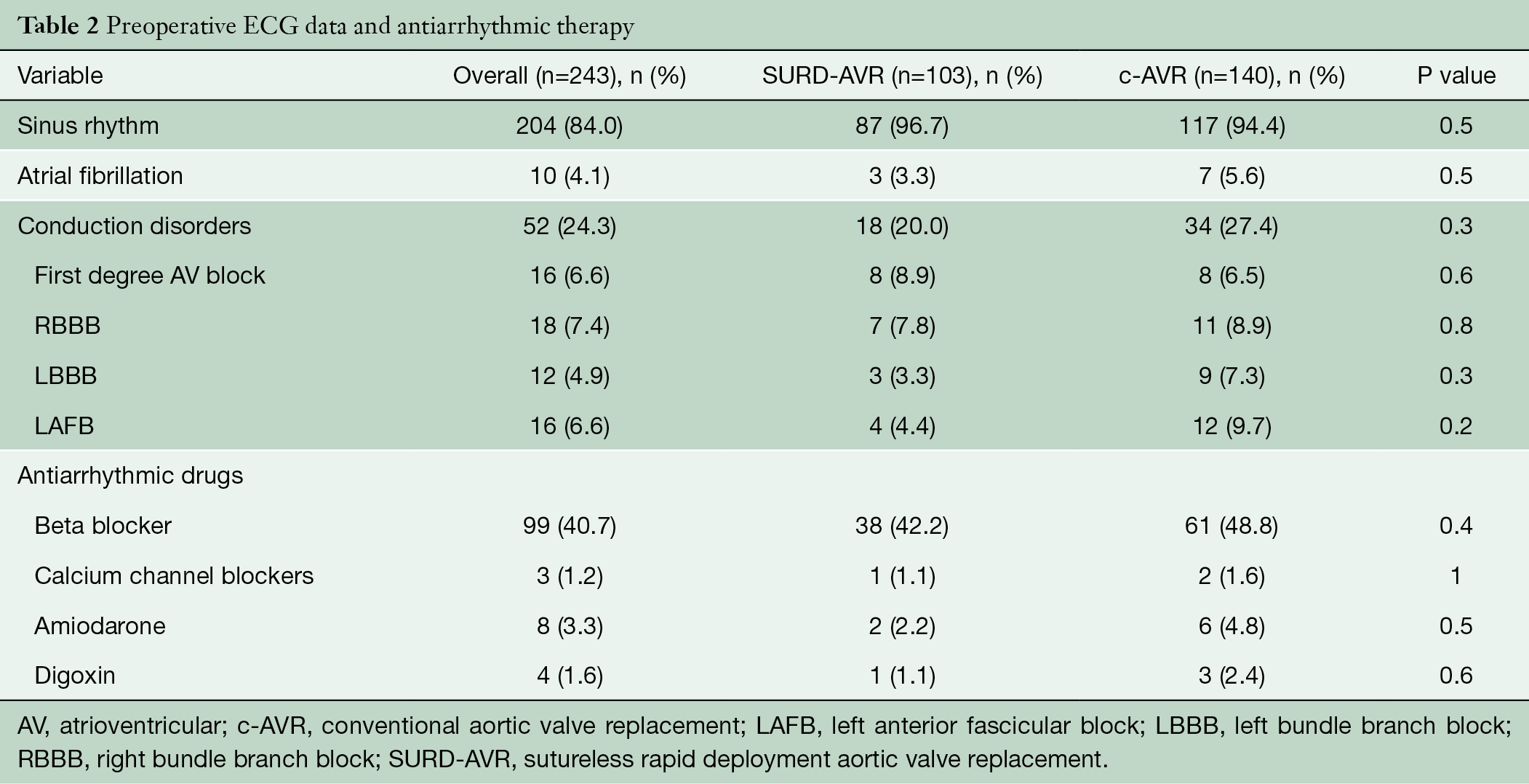 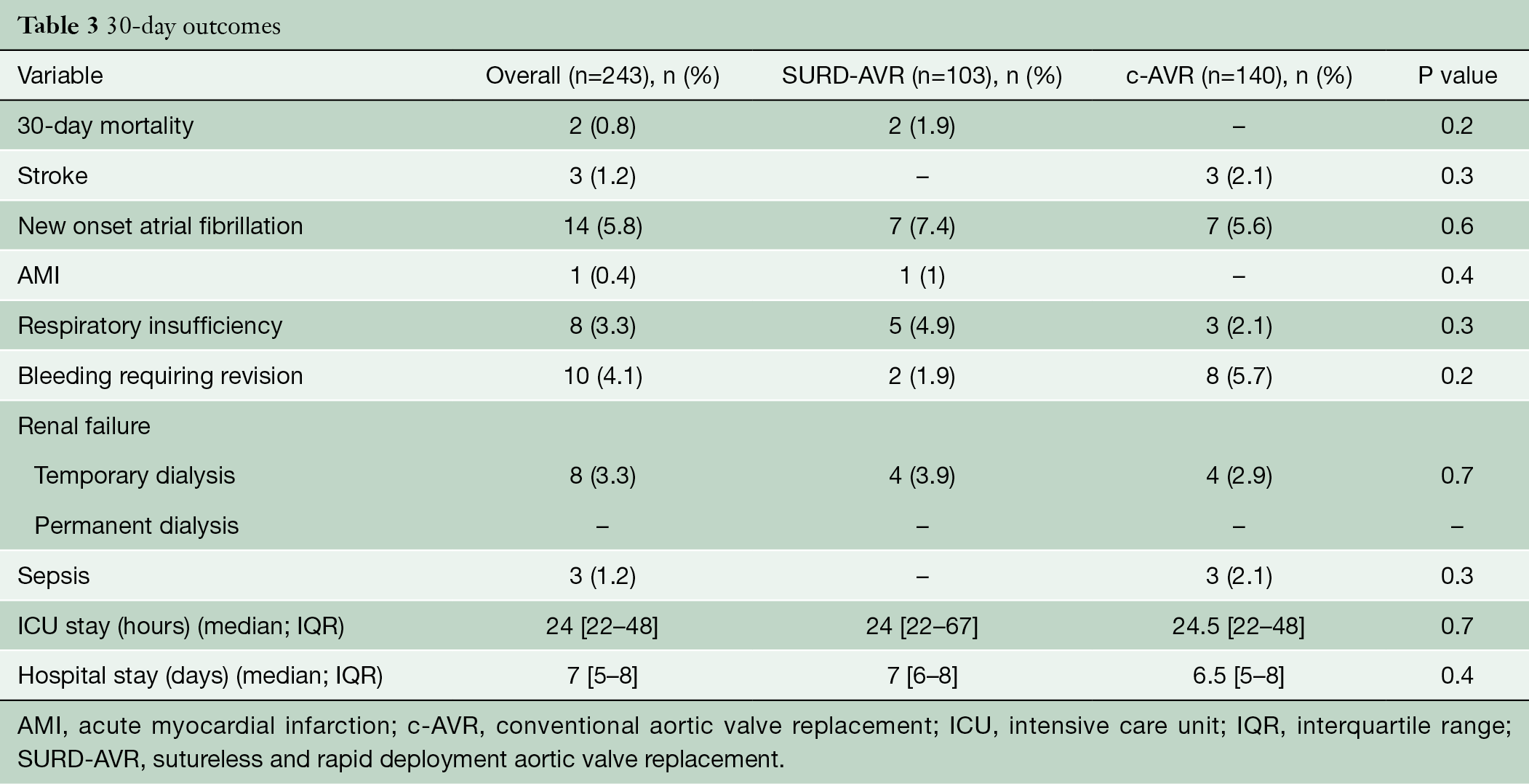 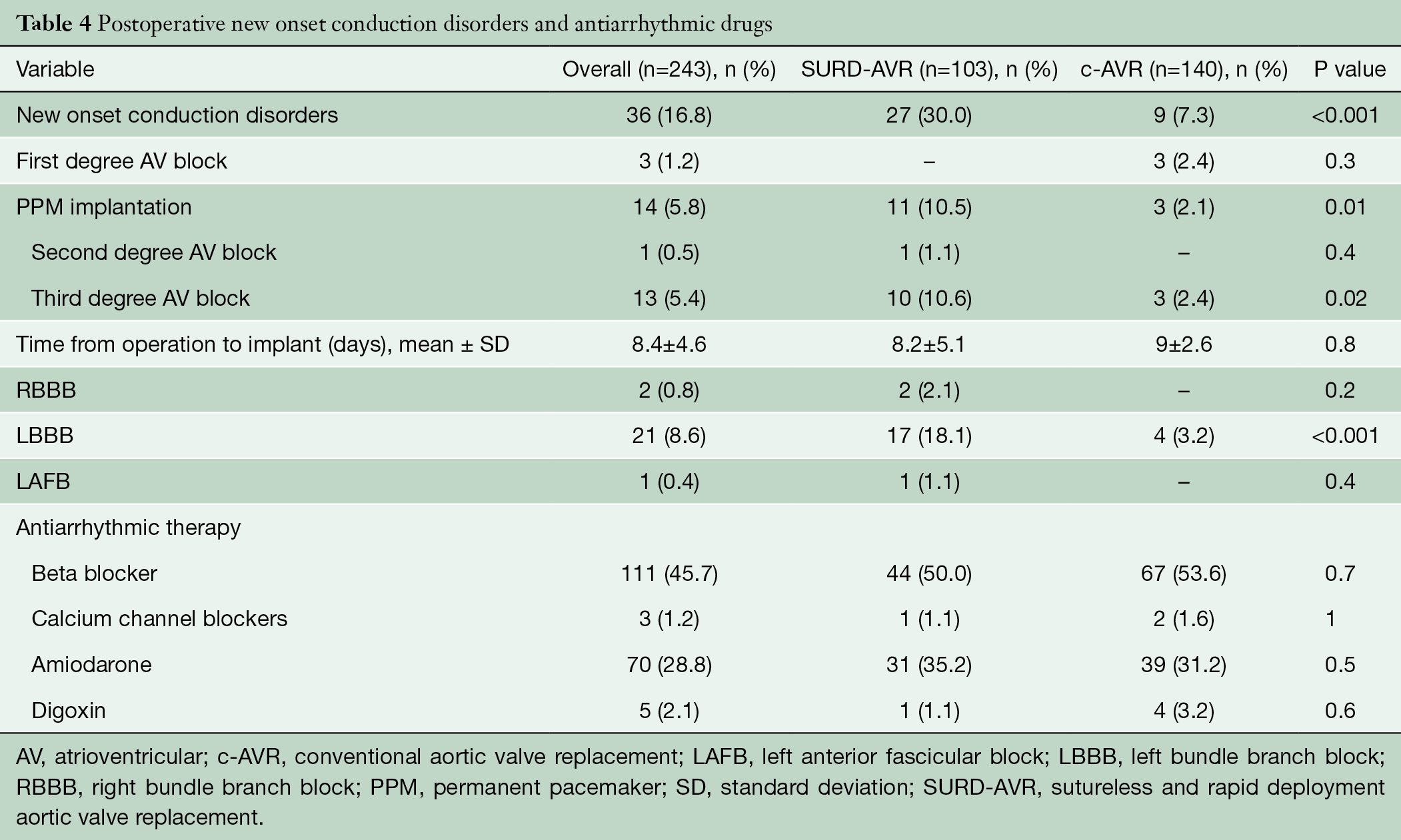 The main findings of the present study can be summarized as follows:

Although the prevalence of PPM implantation in patients undergoing surgical AVR is substantially lower compared to those undergoing TAVR, the risk of conduction abnormalities after surgical AVR remains not negligible (17-20). This is mirrored by a PPM rate and conduction disorders rate in our cohort of 5.8% and 16.8%, respectively. The occurrence of conduction disturbances after AVR is related to the close anatomical proximity of the atrioventricular conduction system to the aortic valve complex as well as the high prevalence of comorbid conduction system disease in patients with advanced aortic stenosis (21,22). In our study population, 52 (24.3%) patients presented with preoperative conduction disorders and these abnormalities strongly—and negatively—influenced postoperative results. The presence of pre-existing conduction disorders was associated with a considerably higher rate of PPM when compared with patients with normal preoperative AV conduction (11.5%, vs. 1.9%, P=0.007). In particular, on multivariable analysis, pre-existing RBBB and first-degree AV block were identified as strong predictors of PPM implantation. It must be noted that SURD-AVR, per se, did not correlate with an increased risk of PPM. We believe this result deserves to be highlighted. Indeed, previous comparative studies between SURD-AVR and c-AVR suggested that SURD-AVR was associated with an increased rate of PPM with no difference between patient risk profiles (6,8,9,23,24).

The real impact of SURD valve technology was likely negatively biased as none of the prior published analyses adjusted for pre-existing conduction abnormalities. Our study demonstrated that SURD-AVR and c-AVR were associated with similarly low incidences of PPM in patients with normal preoperative AV conduction (1.3% vs. 1.9%, P=0.6). Conversely, consistent with data reported by others (25,26), SURD-AVR emerged as risk factor for new onset LBBB. A possible explanation of this finding may be the radial force of the stented frame of SURD valve prostheses imposes pressure on the conduction system embedded in the interventricular septum within few millimeters from the aortic valve and compromises the left bundle branch. The prognostic implications of iatrogenic LBBB remain to be defined; it has been reported that AVR-induced LBBB may be associated with an increased incidence of adverse events defined as the occurrence of advanced AV block requiring PPM, syncope or sudden cardiac death, with most adverse events occurring in the first year after AVR (27). This observation was not confirmed by our analysis. At 1 year, no death, PPM implantation or rehospitalization from cardiac events occurred in patients suffering from postprocedural LBBB. Not unexpectedly, SURD-AVR patients with pre-existent RBBB were more vulnerable for advanced AV block given that the conduction system was already impaired; in this group, RBBB emerged as dominant predictor for PPM implantation.

The present study has certain limitations. It is a non-randomized, retrospective analysis of prospectively collected data with a relatively small cohort of patients from a single center, and therefore conclusions are necessarily limited in their application. In addition, treatment biases for type of AVR technique were evident in our series as SURD-AVR interventions, compared with c-AVR, were more frequently performed in older female patients without BAV, aortic regurgitation, reduced left ventricular function and renal failure. Of note, after controlling for the estimated probability of AVR technique and acknowledged determinants of PPM implantation, the latter was not influenced by the AVR technique.

Our study revealed that the risk of PPM implantation in patients receiving surgical AVR is heavily influenced by the presence of pre-existing conduction disturbances, namely first-degree AV block and RBBB, rather than the type of valve prosthesis. Indeed, SURD-AVR and c-AVR demonstrated similarly low incidences of PPM implantation in patients with normal preoperative conduction; conversely, SURD-AVR emerged as independent predictor for new onset LBBB and was associated with a markedly increased risk of PPM in patients presenting with RBBB. We believe that the knowledge of the respective post-AVR PPM risks for different valve technologies will result in patient-tailored valve selection with improved clinical outcomes.

Ethical Statement: Patient-informed consent for treatment, data collection and analysis for scientific purposes was collected in all cases and the local Institutional Review Board approved the use of data for research.