Since their introduction, sutureless valves (SV) and rapid deployment valves (RDVs) have been shown to significantly reduce cardio-pulmonary bypass and cross-clamp time compared to conventional aortic valve replacement (1,2). This is one reason why these valve substitutes have been used, especially in minimally invasive aortic valve surgery. As with conventional tissue valve substitutes, SV and RDV will fail over time. In addition to surgical re-replacement, transcatheter aortic valve replacement (TAVR) as a valve-in-valve (V-i-V) concept may be a valid option in degenerated SV and RDV. In this context, knowledge of specific valve features of these valve substitutes is essential. This manuscript will describe four cases of a failed Perceval valve, treated with the V-i-V concept.

As the 3F Enable valve is off the market, the two available valve substitutes used today are the Perceval and the Intuity valves. The latter is a RDV, as three guiding sutures for positioning the valve are tied after the valve has been deployed and anchored with a balloon-expandable frame in the sub-annular position. The Perceval valve is a truly suture-less valve. It is composed of a bovine pericardial valve unit, mounted in a carbofilm coated frame. This frame fixes the valve at annular, sinus and sino-tubular levels.

The Perceval valve comes in four sizes: S, M, L, and XL. These sizes correspond to specific annular diameters, which are given in Table 1. It becomes clear that a 21 mm annulus diameter corresponds to a Perceval valve size S as well as size M. 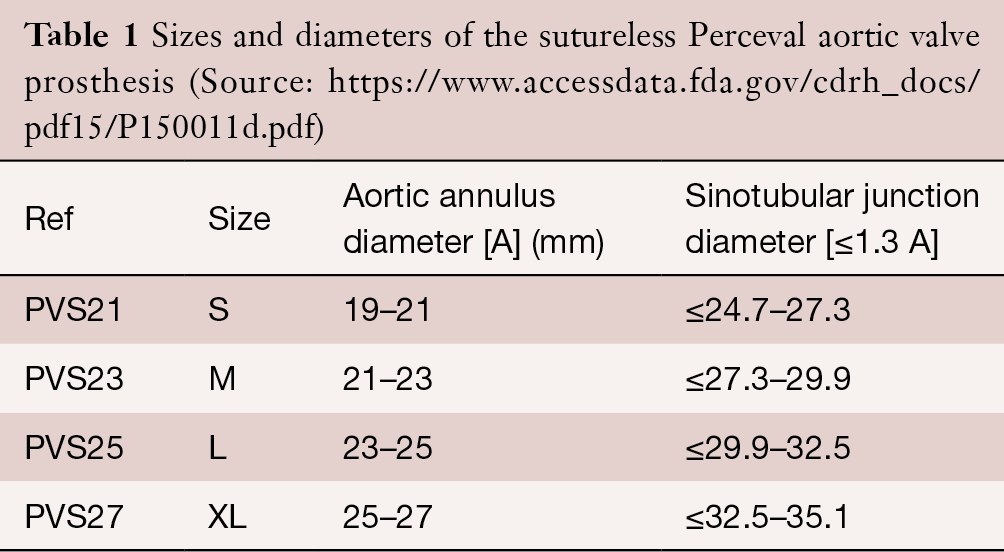 Literature overview of TAVR in SV and RDV

To date, there are only case series that report on TAVR procedures in failed SV and RDV. To the best of our knowledge, a total number of 23 cases have been described so far (5-21). This includes a previous publication by the authors (16). There is also a report of a series of 30 V-i-V procedures in SV and RDV published by Landes et al. (22). This series is part of the multicenter VIVID International Registry. It also includes five 3F Enable valves besides 24 implants in Perceval and one V-i-V in an Intuity valve. As the possibility that single case reports have been part of this registry cannot be excluded,, these 30 cases have not been simply added in numbers to the published case reports. An overview of the current literature of reported case reports and small series, excluding 3F Enable valves, is given in Table 2. 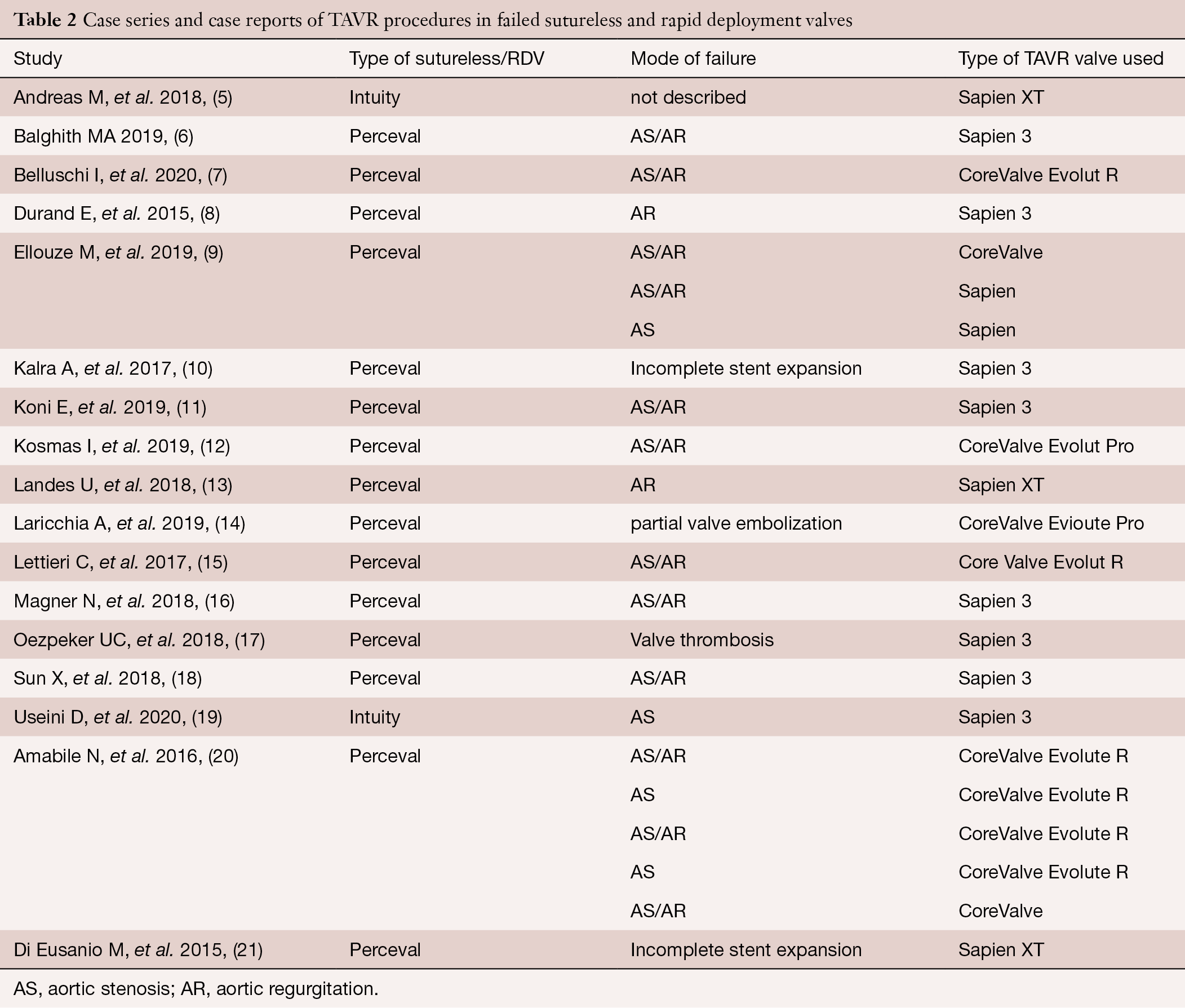 In the majority of cases, a TAVR procedure was performed in failed Perceval valves. This may be related to the total number of Perceval valves implanted compared to the Intuity valve. There were various causes of failure. In the majority, structural valve deterioration (SVD) was present with combined valve stenosis and regurgitation. Two TAVR valve types and their modifications were implanted. In thirteen cases, a balloon-expandable valve (Sapien, Sapien XT, Sapien 3; Edwards Lifescience, Irvine, CA, USA) was implanted (5,6,8,9-11,13,16-19,21). In the remaining five cases, a self-expanding valve (Corevalve, Evolut R, Evolut Pro, Medtronic, Minneapolis, MN, USA) was used (7,9,12,14,15,20). Both valve types have specific characteristics related to valve design and implantation technique. These characteristics have to be considered when using these TAVR valve substitutes in failed SV and RDV.

We describe a series of four cases, which in three patients a balloon-expandable Sapien 3, and in the fourth patient a self-expanding Evolut R valve was implanted in a failed sutureless Perceval valve.

Pre-TAVR computed tomography (CT) scan showed an annulus diameter (mean/max) of 18/21 mm and an effective diameter (area/circumference) of 19/20 mm. Further dimensions of the aortic root included a mid-sinus diameter of 25 mm and a sino-tubular junction of 23 mm. The distance of coronary ostia to the annular plane was 9 mm to the left coronary ostium and 10 mm to the right coronary ostium. Peripheral vessel diameters are given in Table 3.

A 20 mm Sapien 3 valve was chosen for the TAVR procedure. The implantation technique followed a standardized protocol.

The TAVR was performed without any complications. Final assessment demonstrated adequate position of the TAVR valve with no relevant residual aortic regurgitation (Figure 1). 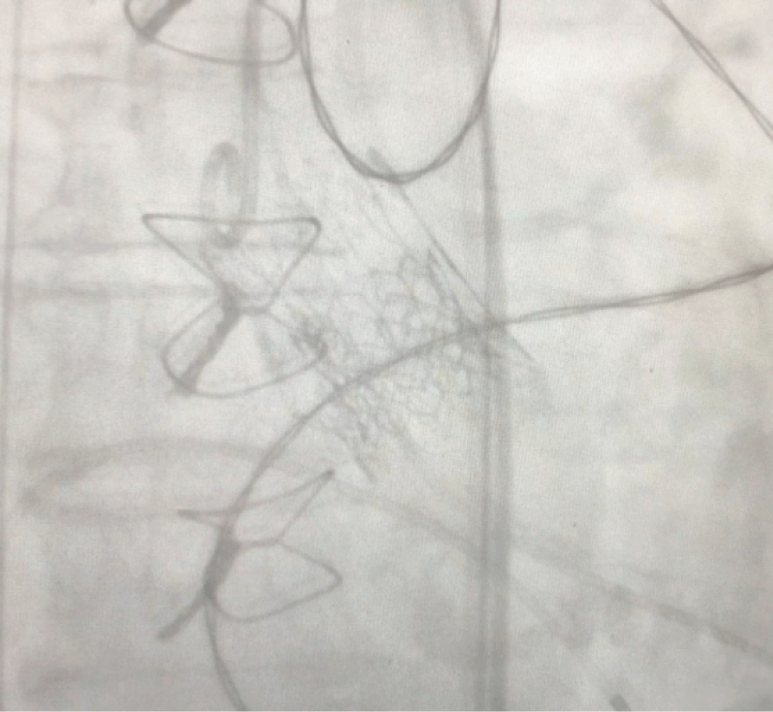 The patient left the hybrid operation room in a hemodynamically stable condition. Postoperative transthoracic echocardiography (TTE) demonstrated normal LV function and a mean gradient across the valve of 24 mmHg. Effective orifice area (EOA) was calculated at 1.0 cm2. There was only trivial paravalvular leak. The patient was discharged on postoperative day (POD) two.

At 12-month follow-up, the patient showed improvement in clinical symptoms (NYHA I–II). Pressure gradients had further decreased (mean gradient 13 mmHg) and the EOA was measured at 1.2 cm2. There was only trivial paravalvular leakage.

An 82-year-old female patient was admitted with deterioration of clinical symptoms (NYHA II–III). In July 2010, she underwent aortic valve replacement with a Perceval size L valve due to symptomatic aortic valve stenosis. Postoperatively, a permanent pacemaker was inserted. Her cardiovascular risk factors included arterial hypertension and dyslipidemia. Investigations revealed prosthetic valve stenosis with a mean gradient of 35mmHg and an AVA of 0.85 cm2. LV function was impaired with an ejection fraction of 41%. There was also mild to moderate mitral (I–II°) and tricuspid (II°) regurgitation.

Following a standard protocol, in this case with additional placement of a guiding wire (EBU 3.5) into the left coronary artery via the right radial artery due to the low take-off of the left coronary ostium, a 29 mm self-expanding Evolut R prosthesis was implanted under temporary fast ventricular pacing. Because the stent was not completely expanded, a balloon valvuloplasty using a 24 followed by a 25 mm balloon was performed under temporary rapid ventricular pacing.

Figure 2 shows the final result of the implantation. The postoperative course was uneventful. On TTE, LV function had slightly improved (LV ejection fraction 47%). Mean pressure gradient was 11 mmHg and EOA was calculated at 1.8 cm2. There was mild residual aortic regurgitation. The patient was discharged on POD three. 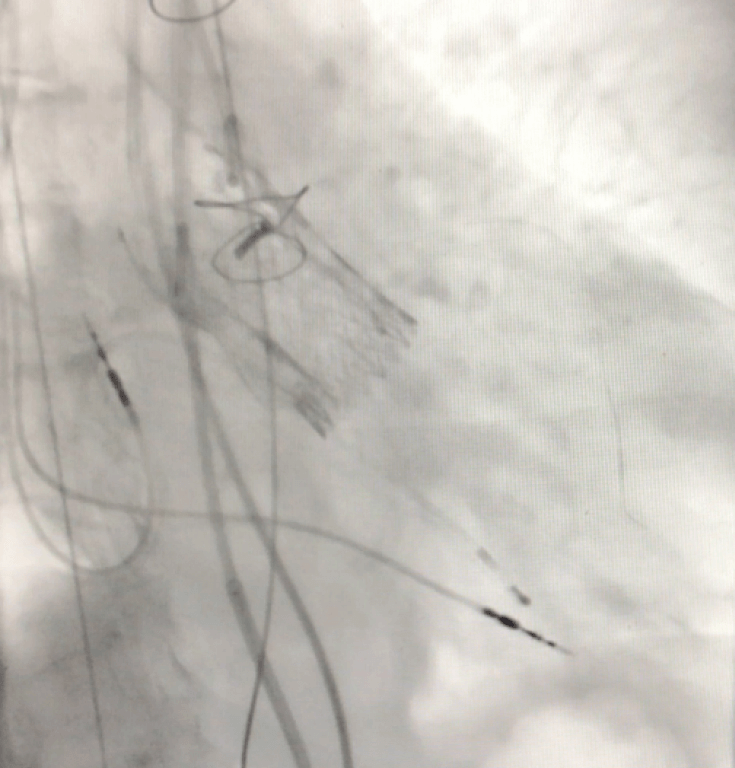 At 3-month follow-up, clinical symptoms had improved (NYHA I–II°). TTE showed an LV ejection fraction of 48% and a low mean pressure gradient of max 6 mmHg with an EOA of 1.9 cm2. There was still mild aortic regurgitation.

In addition to the standard protocol, a Sentinel protection device (Claret Medical, Santa Rosa, CA, USA) was placed into the innominate and the left common carotid artery. A guiding catheter and wire were also positioned into the left coronary artery due to the low take-off of the left coronary ostium. The V-i-V procedure was performed using a 23 mm Sapien 3 transcatheter valve.

The final result is depicted in Figure 3. Analysis of the cerebral protection system revealed large debris in both filters. The early course was complicated by bleeding into the right groin, which was treated conservatively. On TTE, LV ejection fraction was 47%, mean gradient was slightly increased (23 mmHg), and the EOA was 1.1 cm2. There was only trivial residual aortic regurgitation. The patient was discharged on POD five. 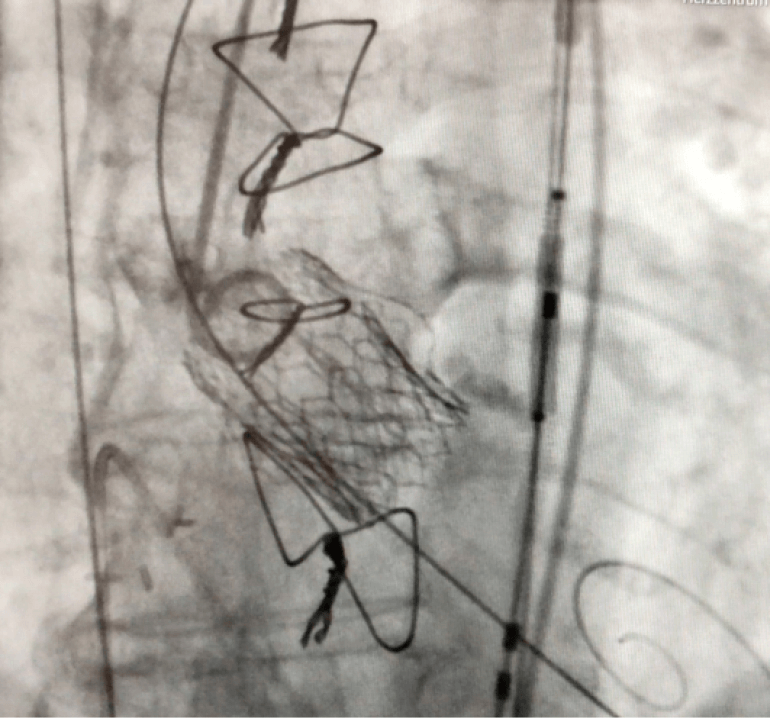 At 3-month follow-up, this patient had also clinically improved (NYHA I–II). LV function also improved (LV ejection fraction 57%) and mean gradient was 17 mmHg with an EOA of 1.5 cm2. There was only trivial residual aortic regurgitation.

The final case was an 85-year-old female patient with combined aortic valve stenosis and regurgitation. She underwent aortic valve replacement with a Perceval valve size S in January 2015. In addition to angioplasty of the left anterior descending coronary artery with a DES in November 2019, the left atrial appendage was partly closed with a Watchman FLX 24 mm Device (Boston Scientific, Marlborough, MA, USA) due to atrial fibrillation with recurrent gastro-intestinal bleeding under anticoagulation.

The patient was readmitted in December 2019 with progressive dyspnea (NYHA III–IV), related to combined prosthetic valve stenosis and regurgitation.

In addition to the standard protocol, a Sentinel protection device (Claret Medical, Santa Rosa, CA, USA) was placed into the innominate and the left common carotid artery. The V-i-V procedure was performed using a 20 mm Sapien 3 transcatheter valve.

The final result is shown in Figure 4. Analysis of the cerebral protection system revealed debris in both filters. The early course was uncomplicated and the patient was discharged on POD 3. 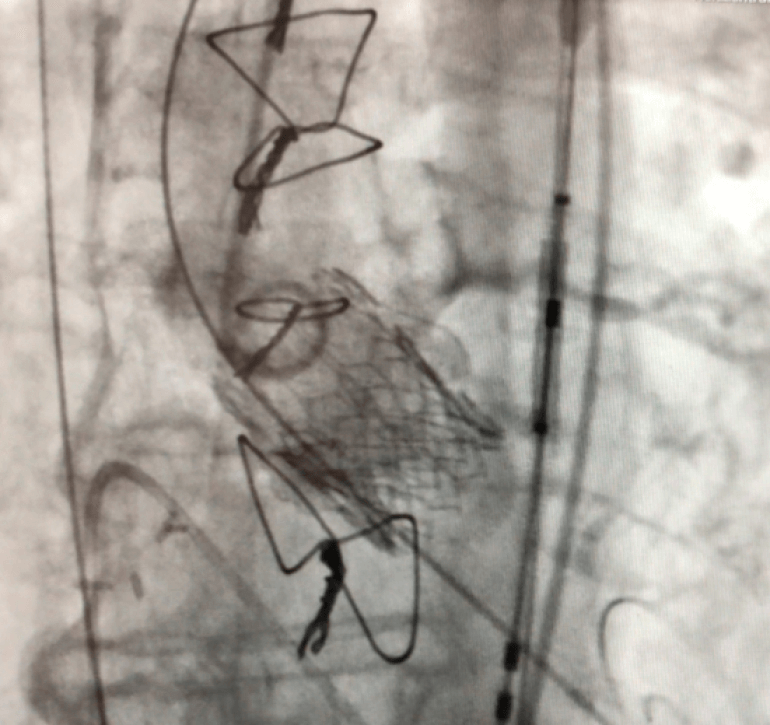 At 3-month follow-up, this patient had also clinically improved, but still had dyspnea (NYHA II–III). LV function was normal and mean gradient across the aortic valve prosthesis was 17 mmHg with an EOA of 1.2 cm2. There was no residual aortic regurgitation. During the last admission, an Amplatzer Vascular Plug III (St. Jude Medical Inc., MN, USA) was implanted to close the residual gap in the LAA.

An overview of important aspects of all four cases is given in Table 7. All cases can be attributed as being technically feasible, with case 1 and case 3 being not successful according to the VARC-2 definitions (23), as mean pressure gradient was above 20mmHG. However, clinically, all patients had improved at follow-up. 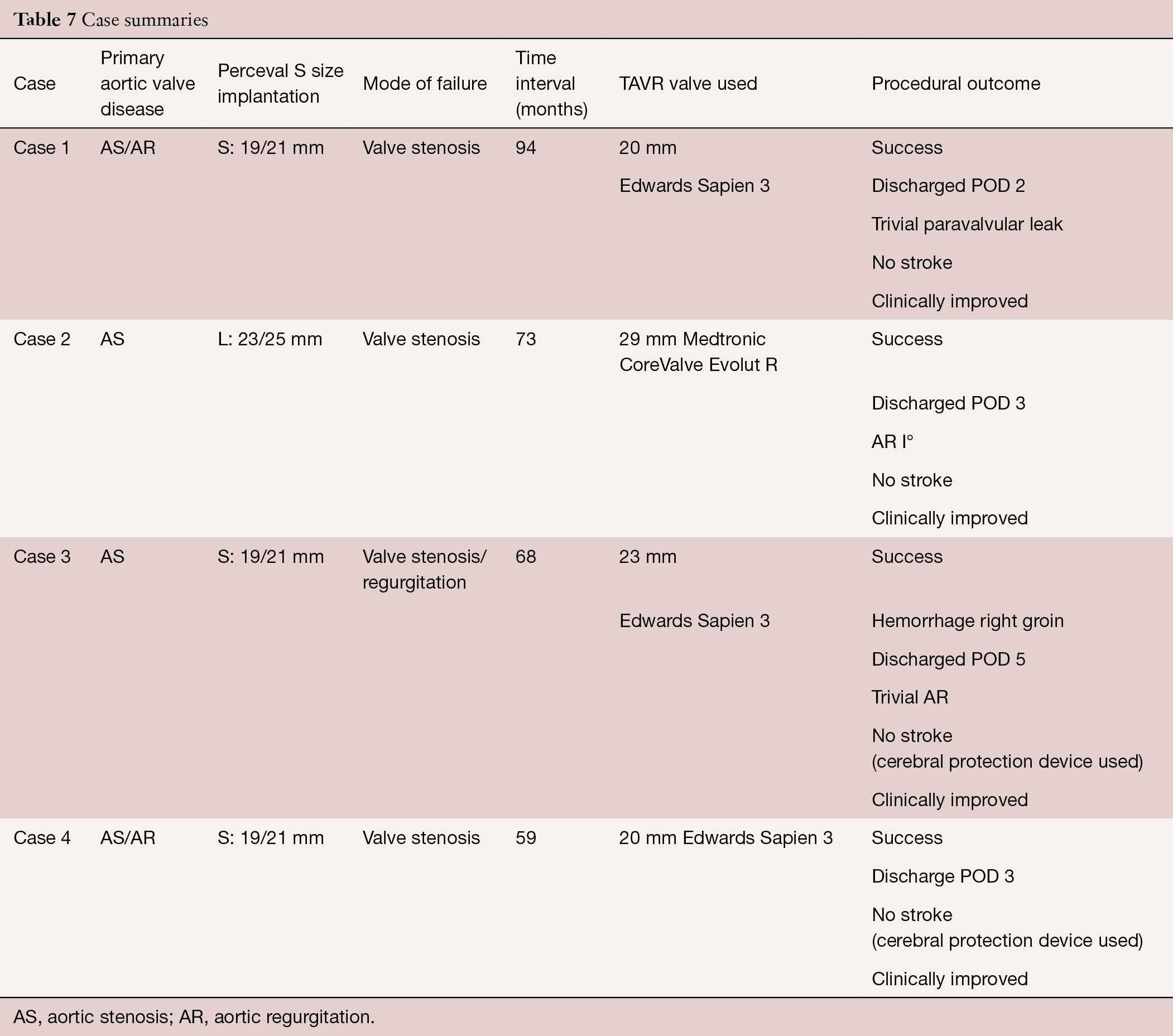 SV and RDV are popular, especially in minimally invasive aortic valve surgery. Mid-term results of valve performance are available (1,2). In failed SV and RDV, V-i-V procedures are an attractive concept, as a considerable number of patients who have received SV and RDV are elderly with several co-morbidities.

With the four cases reported here [including a previous report of one case (16)], a total number of 26 cases have been reported, in which a TAVR procedure was performed in failed SV and RDV. In addition, there is a report of 30 cases by Landes et al. (22), as part of the VIVID International Registry (22), which may represent some of the single case reports, published in the literature overview given in Table 2. In the majority of cases, TAVR was performed in sutureless Perceval valves (6-18,20,21). There are only two case reports in which a TAVR procedure was described in a failed Intuity valve (5,19). We therefore cannot comment on TAVR procedures in failed Intuity valves, but in general, we would not hesitate to perform TAVR procedures in SV or RDV.

It is important to note that specific design features of both valves have to be known before a TAVR procedure can be performed. Especially with the Perceval valve, size labelling and its correlation to the annulus diameter is an important issue for adequate sizing of the TAVR valve. As in all our TAVR cases, we performed the standard pre-procedural investigations. Calculations of diameters by CT scan can help to choose the right valve size. In the first case with an effective annular diameter of 19/20 mm, a 20 mm Sapien 3 valve was chosen, in contrast to the 23 mm Sapien 3 valve in the third case with an effective annular diameter of 20 mm. The reason for this remains unclear. Both cases had only a trivial residual regurgitation. Therefore, both valve sizes seem to be adequate for a size S Perceval valve. In the second case, with a size L Perceval valve, a 29 mm Evolut R valve was used. This demonstrates that this TAVR valve type also seems to be suitable as a V-i-V concept in failed Perceval valves. It also demonstrates that these pressure gradients with this device in a Perceval size L valve were much more favorable compared to the Sapien 3 valve in smaller sizes.

It needs to be proven if the double cage of a Sapien or a CoreValve substitute above a Perceval valve are protective with regard to coronary ostia occlusion. However, with V-i-V procedures in an Intuity valve which has the same design as a standard stented bioprosthesis, the risk of coronary ostia obstruction should be the same as in V-i-V procedures in conventional stented bioprostheses.