Atrial fibrillation (AF) is present in approximately 30% of patients presenting for mitral valve (MV) surgery (1). The addition of a concomitant surgical ablation procedure is indicated in patients that are either (I) symptomatic from their AF or (II) asymptomatic when the addition of a surgical ablation procedure can be performed with minimal risk (2). Surgical ablation of AF in patients undergoing concomitant MV procedure is not only successful at restoring sinus rhythm, but has also has been shown to decrease late stroke rates (3,4).

The Cox-Maze procedure is the gold-standard procedure used in the surgical treatment of AF. The latest iteration, the Cox-Maze IV (CMIV), makes use of a combination of bipolar radiofrequency (RF) ablation and cryoablation. The use of ablation devices to replace the surgical incisions has simplified the procedure, which is helpful in the setting of a concomitant MV procedure since it adds little to the cardiopulmonary bypass (CPB) and cross-clamp times. Furthermore, both CMIV and MV procedures can be performed through either a sternotomy or less invasive right mini-thoracotomy (RMT) approach. In our experience, the use of the minimally invasive approach has significantly decreased morbidity and length-of-stay with similar efficacy in restoring normal sinus rhythm (Figure 1) (4,5). 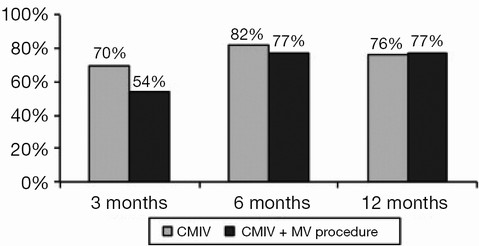 The completion of a CMIV procedure should precede the MV procedure. CPB and an arrested heart provide the ideal milieu for ablation and allows for reliable creation of transmural lesions. This article will focus on several key points which should be addressed during the CMIV procedure in order to avoid complications.

Pitfalls of a concomitant CMIV procedure

The need to re-operate for bleeding occurs in approximately 5% of patients receiving a concomitant CMIV/MV procedure (6). In our experience, postoperative bleeding tends to occur from either of the atriotomy incisions or from the left atrial appendage (LAA) excision. The LAA tends to be friable so care must be taken not to cause inadvertent tears when handling the site of amputation. Because of this, the base of the LAA is closed in two layers using a pledgeted 4-0 prolene suture. Alternatively, the LAA can be excluded. A pursestring is placed into the LAA. One jaw of the bipolar RF clamp is placed through the pursestring, down and into the left superior or inferior pulmonary vein. An AtriClip (Atricure Inc., West Chester, Ohio, USA) device is then placed at the base of the LAA to exclude it. In the RMT approach, the LAA is not amputated, but rather excluded endocardially and therefore does not present a risk for postoperative hemorrhage.

On the right atrial side, two endocardial cryoablations are taken down to the tricuspid annulus at the 10 o’clock and 2 o’clock positions (Figure 2). In order to avoid injury to the overlying right coronary artery, these ablations are performed with the heart beating. The circulating warm blood through the right coronary prevents any injury from cryoablation. During the performance of the left atrial (LA) lesion set, the mitral isthmus lesion occasionally puts a left dominant circumflex coronary artery at risk. If the patient has the typical right dominant circulation, we usually take the isthmus lesion to the junction of the P2-P3 cusp of the MV (Figure 3). This is a safe area. In a patient with a left dominant circulation, it is best to take this lesion as far toward the posterior commissure as possible. When we perform surgery through a median sternotomy, we lift the heart, and mark the area of the coronary sinus between the right coronary and left circumflex circulation with methylene blue. This then serves as a guide for creation of the isthmus lesion.

Figure 2 Endocardial cryoablation using a 3 cm linear cryoprobe at the 10’oclock position down to the tricuspid annulus. 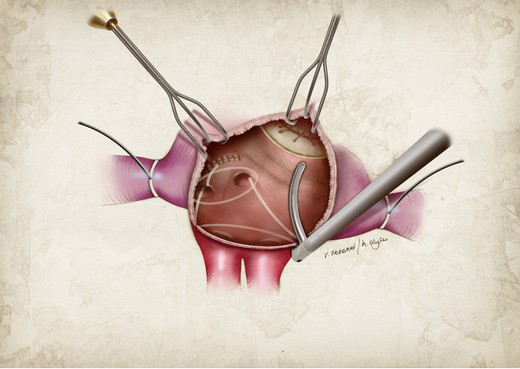 Figure 3 Bipolar RF ablation across the floor of the LA from the inferior aspect of the atriotomy to the mitral annulus. RF, radiofrequency; LA, left atrial.

Perhaps the most disappointing complication of a CMIV/MV procedure is that of postoperative AF recurrence. Prior to performing a CMIV procedure, it is important to consider the LA size, fibrosis/calcification, and age. At our institution, patients with a LA of >8 cm, significant LA fibrosis/calcification on imaging, or age >85 years are considered to have a relative contraindication since recurrence rates tend to be high (8). It should be noted that most episodes of early ATAs within the first 3 months (i.e., the blanking period) tend to subside and are not considered a failure of the CMIV procedure. Below is a description of some of the more common technical failures performed during a CMIV procedure that can lead to ATA recurrence.

Correct use of the RF ablation device

When creating the ablation lines, it should be noted that each line is created by firing the bipolar RF clamp three times with slight repositioning between firings. This maneuver is important to help ensure lesion transmurality. It is also important to ensure that all ablation lines are continuous and overlap with intersecting ablation lines, since it has been shown that gaps as small as 1 mm between ablations allow for continued propagation of fibrillatory wavefronts (9). Finally, the bipolar clamp needs to be cleaned after every 2-3 ablations to remove the char from the electrodes. If this is not done, the device is incapable of creating a transmural ablation.

When performed through a sternotomy incision, prior to bilateral PVI, the surgeon should determine pacing thresholds from each pulmonary vein (PV). PVI is then performed by three separate firings of the bipolar RF clamp around as large a cuff of atrial tissue as possible. Exit block should then be documented by failing to capture the atria when pacing from each PV. Repeat ablations are necessary if exit block is not achieved. Epicardial access to the left PVs is impossible when performed through a RMT, so exit block is confirmed from the right PVs only. Left PVI is achieved by sequential endocardial cryoablation behind the left PVs when performing the LA lesion set (5).

Our initial CMIV lesion set lacked an ablation line along the LA roof, from the right superior PV (RSPV) to the LSPV. With the addition of this lesion, AF freedom from ATAs off antiarrhythmic medications at 6 months was 25% higher (79% vs. 54%; P=0.011) (10). All patients receiving a CMIV at our institutions now receive a connecting lesion between the LSPV and RSPV. This completely isolates the entire posterior LA and is critical in preventing recurrence.

Figure 4 Epicardial cryoablation over the coronary sinus completing the left atrial isthmus line. Please note that this figure does not show simultaneous endocardial ablation over the mitral annulus which is typically performed.

The role of surgical ablation in patients undergoing MV surgery has been established, and should be considered in all patients with a history of AF undergoing MV surgery. The procedure can be performed safely and effectively either with a sternotomy or a minimally invasive approach. However, when performing a concomitant surgical ablation, one must be careful to ensure full-thickness ablations using a standardized lesion set, minimize the risk for bleeding, and avoid coronary ablation.

Conflicts of Interest:R.J.D. is a consultant for AtriCure, and has received research and educational funding from AtriCure and Edwards.