Lung transplantation (LTx) is the ultimate therapy for selected patients with end-stage respiratory insufficiency (1,2). LTx is characterized by a long waiting period due to a low rate of lung graft suitability among the pool of available donors. Moreover, unstable patients can receive only supportive therapies such as mechanical ventilation and or extracorporeal oxygenation for a limited period of time (3,4). However, the clinical armamentarium has evolved in recent years. Procedures of ex-vivo lung perfusion (EVLP) allow a better evaluation and in some cases a recondition of otherwise unusable grafts (5-7). Although still limited in some centers, donation after cardiac death (DCD) is growing with a potential increase of the donor pool (8). Lastly, evolution of extracorporeal oxygenation technologies allows a more effective and longer supportive therapy both pre- and post-transplant (3). The aim of this study is to evaluate the impact of extracorporeal membrane oxygenation (ECMO) in the post-transplant period in our center in the last ten years.

From January 2008 till June 2018, 195 consecutive LTx were performed at Città della Salute e della Scienza, University Hospital in Turin. Mean age at transplant was 49±15 (range, 11–69) years. Mean time on the waiting list was 256±329 (range, 1–2,402) days with a median of 141 days. Main indications for LTX were: idiopathic pulmonary fibrosis (IPF) in 72 patients (37%), chronic obstructive pulmonary disease (COPD) in 60 patients (31%), and cystic fibrosis in 40 (21%) patients. Twenty-three patients (12%) received a transplant on an urgent basis. According to a national protocol, urgent lung transplant was reserved for young listed patients (Age ≤50 years) requiring mechanical ventilation and/or extracorporeal lung support with ECMO or Novalung (4).

Eighteen (9%) and 14 (7%) patients were on mechanical ventilation and ECMO before transplant, respectively. Table 1 summarizes recipients’ and donors’ characteristics. Lung graft has been preserved with an antegrade and retrograde flush with Perfadex® and cold storage at 4 °C before transplant. Thirty-two grafts considered unsuitable for direct transplantation underwent EVLP before transplant. Mean ischemic time was 376±184 (range, 119–1,380) minutes. Lung transplant has been performed according to the standard technique. Cardiopulmonary bypass was used in case of poor oxygenation on mono-lateral ventilation, hemodynamic instability after pulmonary artery clamping or in patients on extracorporeal ventilation before transplant. One hundred and fifty-seven patients (81%) received a bilateral graft. Single lung transplant has been performed in selected cases only on patients with parenchymal disease without history of infection and/or pulmonary hypertension. 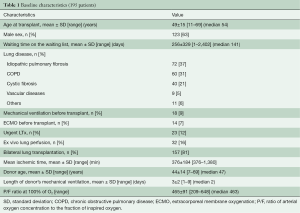 Descriptive statistics are presented as mean, median, standard deviation and ranges for the continuous variables, and as counts and percentages for categorical variables. Comparisons between groups were performed using a χ2 test or ANOVA test as appropriate. All significant variables at univariate analysis were included in a Cox regression multivariate analysis with a stepwise forward conditional method. Kaplan-Meier curves were used to evaluate event-free survival according to categorical variables, compared by the Mantel-Cox test. A two-sided P value <0.05 was considered statistically significant; all analyses were performed with SPSS 20.0 (IBM corp., Armonk, NY, USA).

Twenty-five patients (12.8%) required venous-venous ECMO after transplant for a mean time of 8±8 (range, 1–30, median 5) days. ECMO was accomplished through the insertion of a cannula from the left femoral vein up to the right atrium for the input and through a second cannula from the right femoral vein with the tip just below the junction between the inferior vena cava and the right atrium for drainage. After heparin administration (with a target activated clotting time of 200 seconds), cannulas were inserted under the guidance of a trans-esophageal echocardiogram to check the correct position. The cannulas were then connected to an ECMO circuit and extracorporeal support initiated. During support, a protective lung ventilation protocol was applied. Cardiac function was also checked to identify the onset of right or left ventricular failure. Univariate analysis showed that patients requiring ECMO after transplant suffered more frequently from vascular disease (pulmonary hypertension or Eisenmenger syndrome) as cause of transplant, had higher pulmonary artery pressure, were more frequently on mechanical ventilation or on ECMO before transplant, required cardiopulmonary bypass during transplant more frequently and received a graft from an older donor (Table 2). Independent risk factors for post-transplant ECMO were: vascular disease as cause of transplant [relative risk (RR) 7.8, 95% CI: 1.5–41, P=0.02], donor age (RR 1.6, 95% CI: 1.03–2.3, P=0.03) and need of cardiopulmonary bypass during LTx (RR 3.1, 95% CI: 1.02–9, P=0.04) (Table 3). Patients requiring post-transplant ECMO received transfusions more frequently (P<0.01), had a greater duration of mechanical ventilation (P<0.01) and ICU stay (P<0.01), and had a higher hospital mortality (P<0.01) (Table 4). 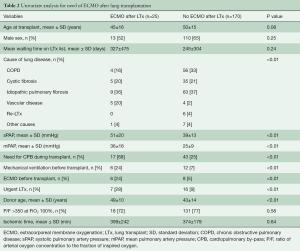 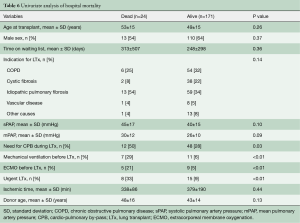 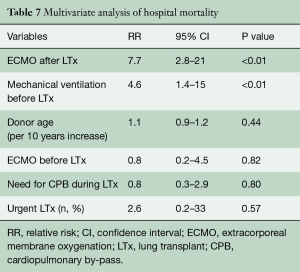 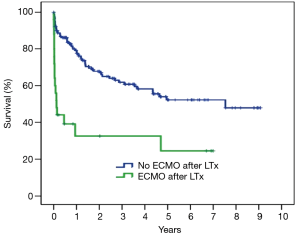 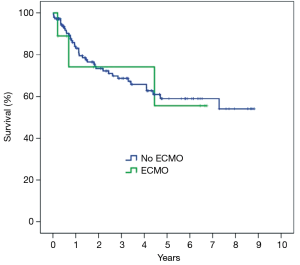 The present study shows our experience on consecutive unselected patients receiving LTx in our center during the last ten years. The analysis has been focused on primary graft dysfunction with the need for ECMO after transplant. Improvements in ECMO technology have led to a safer and more effective support of lung function either before and after surgery, however, post-transplant severe graft dysfunction (although supported by ECMO) still remains a significant risk factor for poor survival after LTx (9).

The main findings of the present analysis are that vascular disease as an underlying cause of transplant is independently associated with post-transplant ECMO, and that ECMO support has a significant impact on early and late outcomes. Pulmonary hypertension is a well-known risk factor for severe primary graft dysfunction. This is due to the particular pathophysiology of pulmonary hypertension. High pressures in the pulmonary artery cause hypertrophy and enlargement of right ventricle with a normal or even small left ventricle. A D-shape pattern with a leftward shift of the inter-ventricular septum is always present. The left ventricle usually maintains a preserved systolic function but suffers from different degrees of diastolic dysfunction. After transplant, there is a significant decrease of right ventricular afterload and an important increase of left ventricular preload. Therefore, evaluation of left ventricular diastolic function is crucial in the pre-transplant phase in order to identify the correct surgical strategy (bilateral lung or heart and LTx). Intraoperative and postoperative management of LTx in the pulmonary hypertension setting is challenging. During surgery, hemodynamic instability is usually related to a worsening right ventricular function due to the increased afterload after pulmonary artery clamping. Extracorporeal circulatory support is therefore always needed to maintain hemodynamic stability. Moreover, extracorporeal support during transplant allows a controlled and smoother reperfusion phase that reaches its maximal critical point intra-operatively during the implantation of the second graft (10). After transplant, the left ventricle receives a huge amount of blood due to the dramatic decrease in right ventricular afterload. For these reasons, some centers suggest maintaining a venous-arterial ECMO in the postoperative period to allow a progressive adaptation of the left ventricle to the new hemodynamic condition (11-13). Recently, Moser et al. from Vienna reported their experience on LTx for idiopathic pulmonary hypertension. They found that a prolonged venous-arterial ECMO after transplant provides excellent results in comparison with the standard management without prolonged support. They reported one- and five-year survival rates in the prolonged ECMO group of 90.2% and 87.4%, respectively (12). However, beside the evident benefits of this strategy, extracorporeal venous-arterial support exposes patients to complications related to the ECMO technology itself (11). More frequent complications (infection or leg ischemia) are related to the site of cannulation. Moreover, the most important complication of venous-arterial ECMO is represented by the so-called “Harlequin Syndrome”, characterized by a discrepancy in oxygenation between the upper and the lower part of the body. Harlequin syndrome and subsequent hypoxic brain damage must be promptly recognized and treated. Treatment is represented by the increase of ventilator support and or circulatory support to full flow or by the implementation of ECMO therapy with a venous-venous-arterial configuration. In our population a venous-arterial ECMO after transplant has never been required. In three cases (two primary pulmonary hypertension and one Eisenmenger syndrome patients) with a significant post-transplant left ventricular diastolic dysfunction, we used venous-venous ECMO in association with the insertion of an intra-aortic balloon pump (IABP). This strategy guarantees adequate oxygenation (maintaining protective or ultra-protective ventilation), reducing the risk of hypoxia in the upper part of the body. We acknowledge that IABP offers only a partial cardiac support, however, in our cases it was enough to allow a progressive adaptation of the left ventricle. We believe that this option can be applied in selected cases as an alternative strategy to venous-arterial ECMO after LTx, reserving the latter for the most critical patients. Early and long-term results are influenced by the need for post-transplant ECMO, although conditional survival at three months is not influenced by post-surgery extracorporeal support. Considering that in our series ECMO has been implanted as a rescue therapy for severely impaired pulmonary function and never as a preemptive strategy, our data confirm the significant impact of severe graft dysfunction on hospital and long-term results.

The retrospective, single-centre design and the relatively small sample size are the main limitations of the study.

In conclusion, although our analysis suffers of some critical points represented by the relatively small cohort of patients and the retrospective nature of our analysis, in our experience, severe graft dysfunction after LTx still has a significant impact on early and late results.