Left ventricular free wall rupture (LVFWR) remains to be one of the most life-threatening complications of acute myocardial infarction (AMI). LVFWR occurs in up to 2% of patients with AMI (1). First myocardial infarction, anterior AMI, female sex, hypertension, and age >70 years have been reported to be significant risk factors for LVFWR (2). Conversely, primary percutaneous coronary intervention is a significant protective factor against LVFWR (2). Although the incidence of LVFWR has decreased in association with the widespread adoption of reperfusion therapy, the mortality rate remains as high as 50% (2). LVFWR still accounts for 24–61% of in-hospital disease-related mortality and requires prompt diagnosis and treatment (3).

Clinical presentation varies from cardiogenic shock or cardiac arrest with pericardial effusion to stable hemodynamics. Although conservative treatment for LVFWR has been reported (4), prompt surgical repair is the treatment of choice. However, the tissues at the rupture site are usually very vulnerable due to AMI, and therefore, careful surgical repair is required. To date, various surgical treatment options have been proposed. However, the optimal therapeutic strategy remains controversial because of the relatively low incidence of post-infarction LVFWR. In this review, the primary focus will be on the technique and outcomes of surgical repair, specifically sutureless repair techniques, for post-infarction LVFWR.

According to the intraoperative findings, LVFWR has been historically classified into two types: blow-out and oozing. The oozing type is more frequently observed, and occurs in almost 80% of cases (5). The blow-out type is defined as a macroscopic defect of the epicardium with free communication between the left ventricular cavity and the pericardial space (6). The oozing type is defined as absence of a macroscopic tear on the infarcted area, with blood oozing from the infarcted myocardium (6). In some cases, bleeding due to LVFWR ceases spontaneously and only a hematoma on the infarcted myocardium, but no active bleeding, can be observed intraoperatively. This type of LVFWR, which might be called a sealed rupture, has been classified as the oozing type in most studies (3,7). Not surprisingly, the blow-out type confers a higher probability of early mortality compared to the oozing type (3,8).

History and types of surgical procedures

The principles of surgical repair for LVFWR include relieving cardiac tamponade, closing the tear, and obtaining hemostasis while minimizing damage to the intact myocardium. Prevention of postoperative re-rupture or pseudoaneurysm formation is also important.

Although percutaneous intrapericardial fibrin glue injection therapy has been reported as an alternative treatment (9), surgical repair is the gold standard in the treatment of LVFWR. Several different surgical repairs for LVFWR have been proposed since the 1970s and have varied over time. In 1972, FitzGibbon et al. reported infarctectomy and closure of the myocardial defect under cardiopulmonary bypass (CPB) (10). Montegut also reported successful surgical repair using a direct suturing technique for LVWFR (11). Later, surgical repair using a patch was introduced. For better control of hemorrhage, Núñez et al. described a Teflon patch repair covering the ventricular tear and the surrounding infarcted myocardium (12). A Teflon patch was fixed to the normal myocardium using a continuous suture. In their series, four of seven patients survived. Thereafter, with the advent of glue, several investigators have attempted to fix the patch onto the epicardium using glue without sutures. Padró et al. reported 13 cases of patch repair with glue (13), where a Teflon patch was placed over the area and glued to the heart surface with surgical glue. CPB was not used, except in a patient with a posterior tear. The outcome was excellent, with zero mortality up to five years postoperatively. In 2005, Muto et al. reported a successful case of sutureless repair using a fibrin tissue-adhesive collagen fleece (14).

As mentioned, several different techniques are currently available for the treatment of post-infarction LVFWR. They are generally classified into two groups: sutured and sutureless repair (15). In a meta-analysis of 25 studies performed by Matteucci et al., the outcomes of 209 patients who underwent surgery for LVFWR were reviewed (5). Sutured repair was used in 56% of patients; in-hospital mortality after sutured repair was 13.8%, which was comparable to 14% after sutureless repair. A trend toward a higher rate of in-hospital re-rupture was observed in patients who underwent sutureless repair. However, in a meta-analysis involving 363 patients, which was reported later by the same group, sutureless repair was shown to reduce in-hospital mortality by approximately 40% compared to suture repair (8).

Several types of patches can be used for sutureless repair: autologous pericardium, xenopericardium, synthetic materials, and an extracellular matrix. Sakaguchi et al. reported the clinical outcomes of sutureless repair in 32 consecutive patients with oozing type LVFWR. They used an autologous pericardial patch and biological glue, and the in-hospital mortality rate was 15.6% (16). Holubec et al. used an acellular xenogeneic extracellular matrix membrane, which has excellent pliability, although running sutures were also performed around the infarcted area in addition to fixation with glue (17). Recently, the use of a collagen sponge patch for sutureless repair has been widely reported (7,14,18). TachoComb and TachoSil (CSL Behring K.K., Tokyo, Japan) are ready-to-use sheets of fibrin tissue-adhesive collagen fleece and contain fibrinogen, thrombin, and aprotinin (Figure 1). Unlike TachoComb, TachoSil is free from bovine aprotinin and can be stored at room temperature. Compared to pericardial patches, the advantage of the collagen patch is that it is fast and has excellent pliablity.

Median sternotomy and pericardiotomy were performed to relieve tamponade. After clots and blood were removed from the pericardial space, the rupture site was carefully identified (Figure 2). The heart was elevated either manually or using a Starfish heart positioner (Medtronic Inc., Minneapolis, MN, USA) if necessary. In general, CPB is not required. The tear or bleeding site on the epicardium and the extent of the hematoma on the heart were evaluated. Subsequently, TachoSil hemostatic collagen sponges were placed and manually pressed using gauze to the surface of the infarcted area (Figure 3). Usually, two or three sheets of TachoSil sponges are applied to cover the epicardial hematoma surrounding the tear. After hemostasis was confirmed, we additionally applied fibrin glue on the margin of the TachoSil patches to secure the adhesion of the patches on the epicardium, as we experienced a case of TachoSil patches that came off the myocardium early. A 77-year-old woman underwent sutureless repair using only TachoSil patches for LVFWR, and subsequently underwent reoperation for new-onset ventricular septal rupture four days postoperatively. In the second operation, we found that the TachoSil patches were completely detached from the myocardium. Although the TachoSil patch itself is a tissue-adhesive, we currently also apply glue around the TachoSil patches. 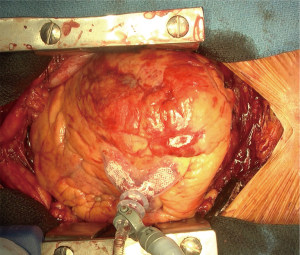 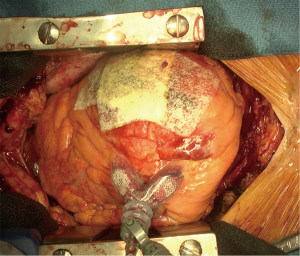 Figure 3 TachoSil sheets applied on a tear and the surrounding infarcted myocardium.

Since a successful case was reported in 2005 (14), several investigators have reported the outcomes of sutureless repair using TachoComb/TachoSil, although the number of cases remain to be very small. Raffa et al. reported the outcomes of six consecutive patients who underwent sutureless repair using the TachoSil patch (18). Of the six patients, two had the blow-out type, and CPB was used in three patients with unstable hemodynamics. The in-hospital mortality rate was 17%. Postoperative re-rupture occurred in one of two patients with blow-out type LVFWR, which was successfully treated. We previously reported the outcomes of 35 patients who underwent sutureless repair using the TachoComb/TachoSil patch (7). The blow-out type was observed in two patients. None of the patients required CPB. The in-hospital mortality rate was 17%, and postoperative re-rupture occurred in six patients (17%). The rates of re-rupture were 12% in patients with the oozing type of LVFWR and 100% in those with the blow-out type.

Although sutureless repair is simple, fast, and reportedly associated with better early outcomes than suture repair (8), patients need to be carefully selected, especially those with a blow-out type of LVFWR. Several successful cases of sutureless repair for a blow-out type LVFWR have been reported (19,20); however, in the larger series, the incidence of postoperative re-rupture was very high in those with a blow-out type (7,18). Therefore, it is reasonable to think that sutureless repair is not recommended for the blow-out type and, if applied, postoperative close surveillance and early detection of re-rupture followed by surgical treatment are necessary. Furthermore, even in patients with an oozing type, intraoperative findings, such as oozing of blood from multiple areas of the epicardium, bulging of the infarcted myocardium in the systolic phase, severely edematous heart, and large hematoma in the epicardium, might be associated with postoperative re-rupture, and can help surgeons determine the appropriate surgical procedures (7).