The treatment of aortic valve disease is the most common valvular surgery in industrialized nations (1), with 3–9% of the population having at least moderate aortic stenosis over the age of 80 (2). Historically, surgical valve replacement has been the gold standard procedure. However, the treatment of aortic valve pathology has been in a state of flux for the last two decades with an increase in the use of transcatheter aortic valve replacement (TAVR) in low-risk patients (3). As TAVR has become more established, newer surgical prostheses have been developed with a variety of anchoring systems that do not rely solely on sutures to hold the valve in the appropriate location. Three solutions were eventually brought to market: the 3F Enable prosthesis (ATS Medical, Inc, Minneapolis, MN, USA), the Perceval valve (Perceval, Livanova PLC, London, UK) and the Intuity valve (Intuity, Edwards Lifesciences, Irvine, CA, USA).

The 3F Enable valve is comprised of a self-expanding, nitinol-stented prosthesis that is secured to the surgically debrided aortic annulus with two sutures. After development, this valve solution suffered several valve dislodgements and has been subsequently removed from the market. The Edwards Intuity valve is a bovine pericardial prosthesis that is modelled on the widely implanted Perimount MagnaEase aortic prosthesis and has been modified to include a balloon expandable sub-annular skirt that prevents paravalvular regurgitation after the valve is deployed. Three sutures that are equally spaced around the surgically debrided aortic annulus secure the valve, thus it is described as a rapid deployment valve (RDV). The Perceval valve is a bovine pericardial valve attached to a self-expanding nitinol stent. It is initially guided into position using three sutures, which are subsequently removed, and the valve is held in position by the radial force that the valve stent exerts on the aortic annulus and aortic root. This valve is described as a sutureless rapid deployment valve (SURD).

These solutions attempt to reduce surgical trauma by reducing cross-clamp and cardiopulmonary bypass (CPB) times. Furthermore, newer prostheses have increased the utility of minimally invasive approaches through anterolateral thoracotomy and upper hemisternotomy. These approaches aim to reduce short-term morbidity associated with surgical intervention while maintaining the long-term surgical benefits. This review aims to determine whether any important differences in the outcomes for patients treated with these two new aortic valve solutions occur.

This meta-analysis was performed in accordance with the Preferred Reporting Items for Systematic Reviews and Meta-Analyses (PRISMA) recommendations and guidelines. The search strategy queried the electronic databases EMBASE, Ovid Medline, Scopus, the entire Cochrane Central Register of Controlled Trails (CCRCT), Cochrane Database of Systematic Reviews (CDSR) and the Database of Abstracts of Reviews of Effects (DARE) from inception to 03 October 2019. The search terms were “(sutureless valve OR Perceval) AND (rapid deployment valve OR Intuity OR Enable) AND (aortic valve surgery OR aortic valve replacement)”. The references of previous systematic reviews were assessed to ensure no additional publications were missed.

Eligibility for inclusion in this systematic review and meta-analysis included comparative studies that assessed the outcomes of adult patients undergoing aortic valve replacement with rapid deployment and sutureless valve prostheses for the treatment of aortic valve disease of any etiology. In order to ensure sufficient center experience, papers were only included if more than ten cases were reported in each arm. Only English language papers were analyzed. Studies with inadequate data regarding outcomes and studies that only included patients treated with the now removed 3F Enable prosthesis in the rapid deployment arm were excluded. If centers reported outcomes of overlapping patient series, the most contemporary series was analyzed. Conference abstracts, case reports, editorials, reviews and expert opinion pieces were excluded. Article identification and inclusion were performed independently by two authors (CDF and AC) and discussed until consensus was reached. 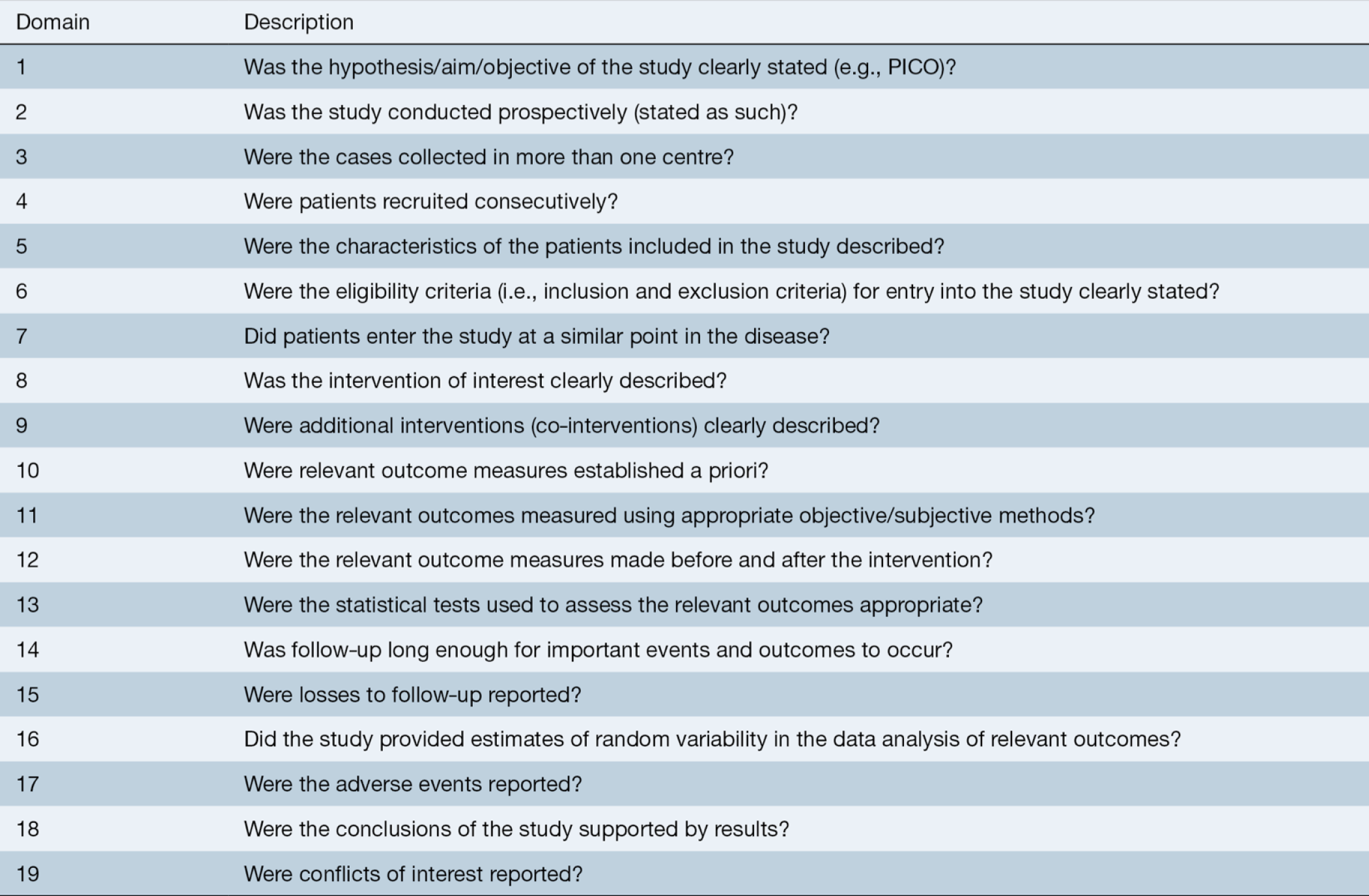 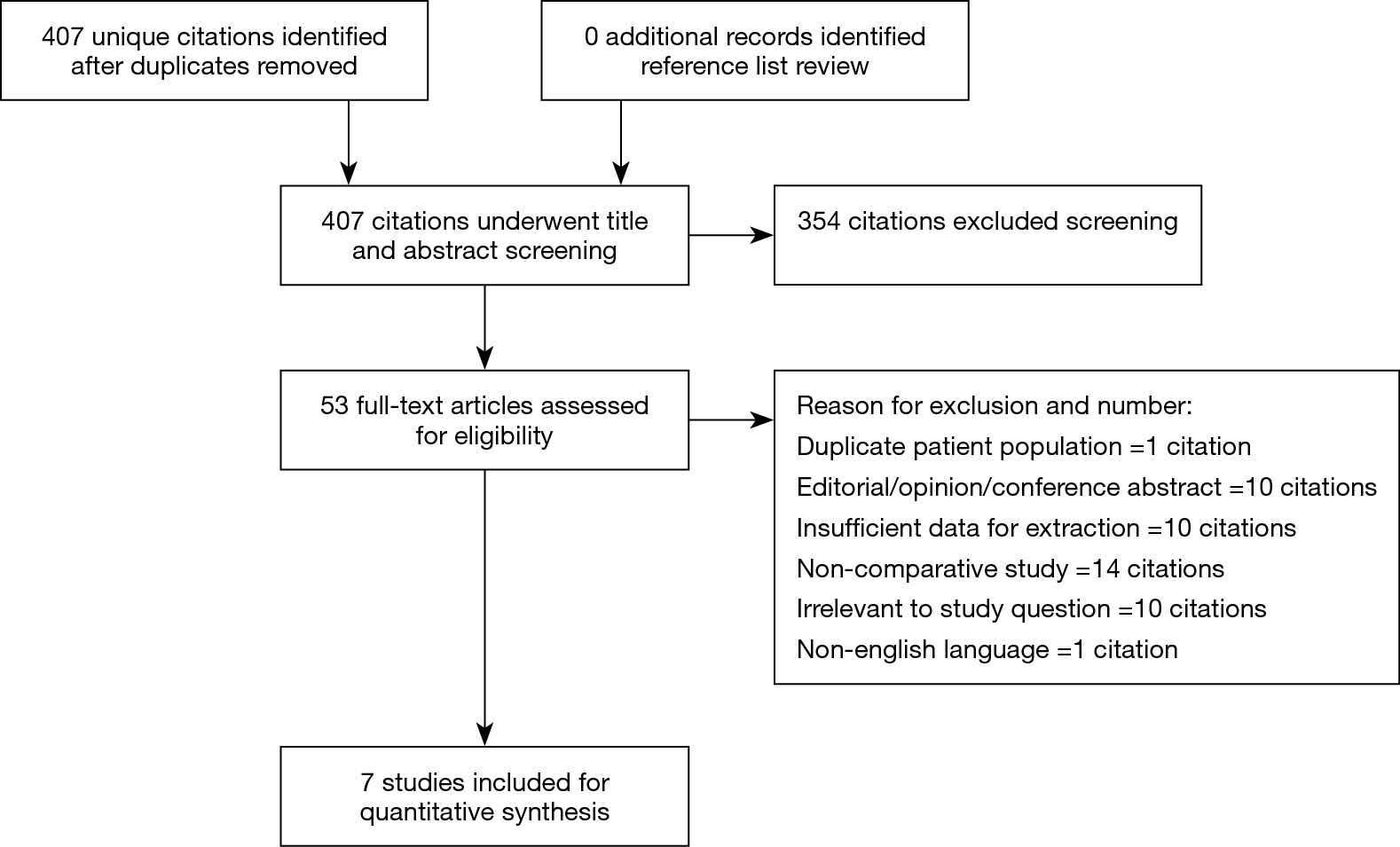 Figure 2 Forest plot of the rates of post-operative pacemaker implantation.

ICU LOS was reported in 3,165 patients (2,077 SURD, 1,088 RDV) across six studies (5,8-12). There was a trend towards a shorter ICU LOS with SURD, although this did not reach statistical significance (95% CI: 2.26–0.01; P=0.05; I2=84%) (Figure S14). Significant heterogeneity was introduced in the study by Liakopoulos et al. (12). The mean ICU and hospital LOS was calculated from the reported median and interquartile range and it is likely that the mean LOS is skewed by several disproportionally long ICU LOS. Exclusion of this study confirms no significant difference in ICU LOS (P=0.1; I2=23%).

The primary outcomes are summarised in Table 3. 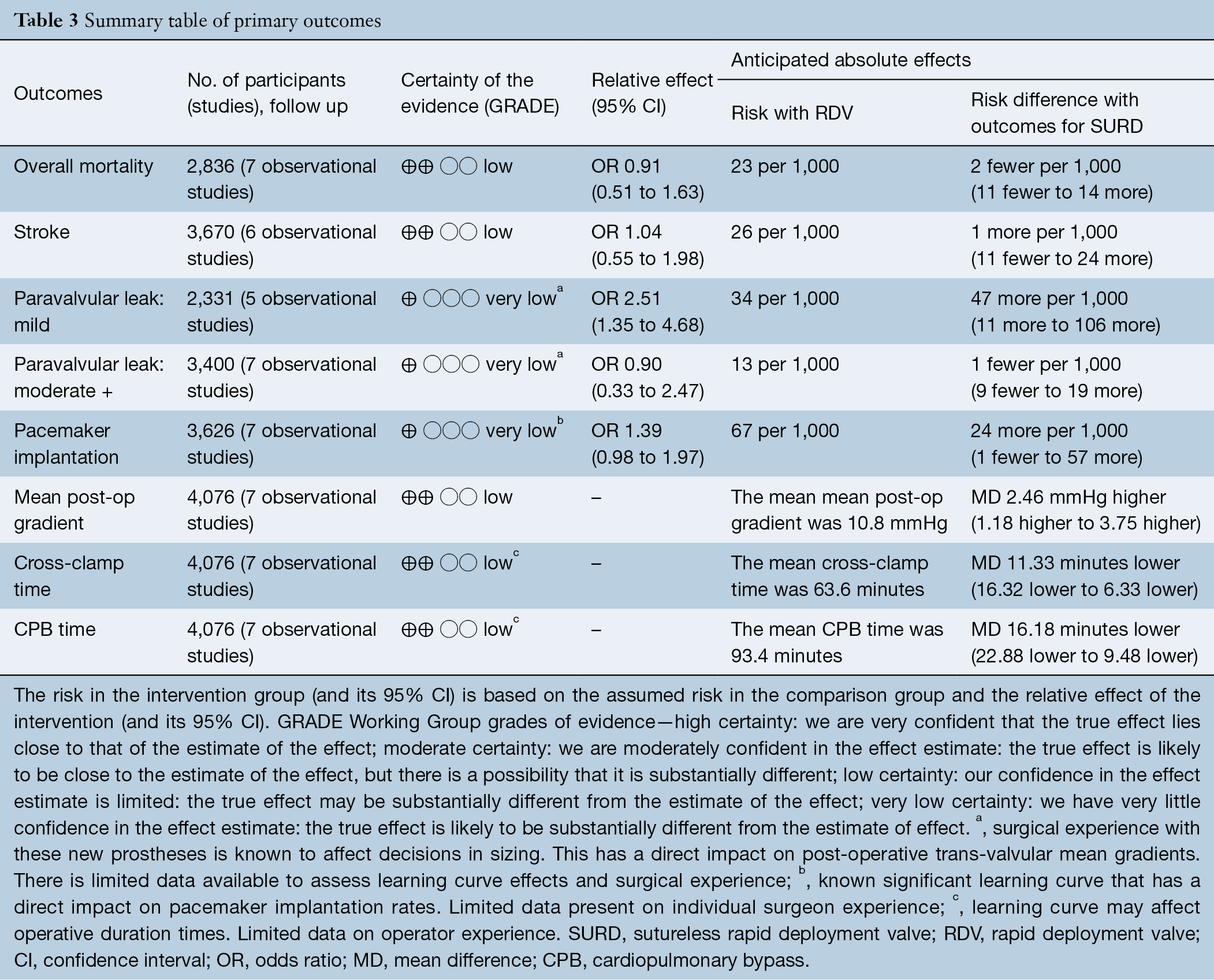 This meta-analysis assessed the procedural and early clinical outcomes of patients undergoing aortic valve replacement with either SURD or RDV. A major perceived benefit of RDV and SURD over conventional aortic valve replacement is the speed of valve siting, which reduces cross-clamp and CPB times and may be of particular relevance for patients requiring concomitant procedures. It has been demonstrated that longer CPB and cross-clamp times are associated with increased mortality and early morbidity (13-15). In terms of reducing procedure time, there was a clinically significant reduction in cross-clamp and CPB times associated with the use of SURD. There was significant heterogeneity in the analysis of both CPB (I2=94%) and cross-clamp times (I2=88%). Leave-one-out sensitivity analysis determined that the study by D’Onofrio et al. contributed a significant amount of heterogeneity into the difference for CPB times. However, it is unclear why the population in this group was different from the rest of the study population. Post-hoc subgroup analysis of patients undergoing isolated aortic valve replacement was undertaken to limit the heterogeneity introduced by patients undergoing a wide variety of concomitant procedures. The CPB and cross-clamp times for SURD remained significantly shorter than RDV, although there remained significant heterogeneity between groups. There was no obvious source for the heterogeneity. The difference in cross-clamp and CPB times demonstrated in this study did not result in a difference in mortality. When including the propensity matched data from two studies (4,5) into pooled analysis, there was a reduction in the degree of observed heterogeneity for CPB and cross-clamp times, with a significant reduction in procedural times in favor of SURD. This suggests that the observed heterogeneity is likely due to differences in patient population backgrounds between the two groups.

Despite the increase in TAVR in recent years, surgical aortic valve replacement will continue to have an ongoing role, particularly in low-risk patients and those requiring complicated procedures. As part of a drive to improve short-term outcomes associated with surgical procedures, there has been an increasing number of patients undergoing aortic valve replacement via minimally invasive approaches; the most common access incisions are a partial upper hemisternotomy and a right anterior thoracotomy. These approaches have demonstrated benefits of reduced incidence of post-operative atrial fibrillation, shorter hospital and ICU LOS and a reduced blood transfusion requirement compared with conventional full sternotomy, with no significant difference in mortality or perioperative stroke (16-18). Despite these benefits, minimally invasive approaches have longer cross-clamp and CPB times and are technically more demanding. The development of durable rapid deployment and sutureless aortic valves that simplify aortic valve replacement may make minimally invasive approaches more appealing to a wider group of surgeons and potentially improve the short-term outcomes of surgery without putting patients at risk of prolonged CPB and cross-clamp times, particularly during the learning curve phase.

We demonstrated that the mean gradient across SURD was 2.46 mmHg higher than the mean gradient across RDV. Excellent transvalvular gradients across RDV have previously been recognized and is proposedly attributed to the subannular balloon expanded skirt, which enlarges the left ventricular outflow tract, promoting increased laminar blood flow through the valve annulus (23,24). Whether this 2.5 mmHg represents a clinically significant difference is uncertain. Unfortunately, we were unable to compare rates of PPM due to differences in data reporting between studies. Sizing SURD has been an important area of interest in recent times as correct sizing is critical. Oversizing SURD has been an issue due to an understandable concern of surgeons looking to avoid para-valvular regurgitation. However, oversizing leads to incomplete expansion of the stent frame, preventing complete leaflet opening, thus reducing the effective orifice area leading to increased gradients. A grossly oversized valve will also result in stent frame infolding (25). The issue with sizing led to an industry sponsored alert in 2011 to increase surgeon awareness of the possible implications of oversizing the Perceval S valve (26). The importance of PPM is perhaps a slightly controversial topic. Some authors suggested an increased mid-term mortality and worsened long-term cardiological outcomes (such as left ventricular mass regression and presentations with heart failure) (27-29) with PPM, while others demonstrated no clinical difference in terms of outcome following aortic valve replacement (30,31). Despite this uncertainty, it is reasonable to aim to achieve the lowest possible post-operative transvalvular gradient.

There was no significant difference in permanent pacemaker implantation (PPI) rates between the two valve types. However, the overall PPI rates of 8.22% were high compared to the expected rates following surgical aortic valve replacement, which is 1.9–2.7% (32-35). Pacemaker implantation rate is an important performance indicator. Patients who require PPI after aortic valve replacement have reduced risk-adjusted long-term survival compared those who do not require pacemaker implantation (35,36). Implantation technique has been shown to be an important factor that can impact pacemaker implantation rates, particularly with regards to the Perceval valve. Meticulous attention to annular debridement, valve sizing and implantation depth with regards to the LVOT reduces post-operative PPI requirement (37). There is also a clear learning curve with implanting the new devices, with PPI rates declining as experience with devices grows (8,37). Reducing the morbidity through ensuring meticulous surgical technique will be essential to maintain excellent surgical outcomes in an increasingly low-risk surgical population, as the majority of high-risk patients receive TAVR.

There are several limitations identified in this study. There was significant heterogeneity in several important parameters and the cause of this heterogeneity was often not identified and controlled for. It is likely that heterogeneity arose from the different patient populations and center experiences, as the degree of heterogeneity reduced when only propensity matched data was included from the studies by D’Onofrio et al. and Ensminger et al. The use of different risk scores made it impossible to compare and adjust for the pre-operative risk of patients between studies. Furthermore, there was insufficient data to determine the effect that the learning curve has on outcomes. The learning curve is a particularly important consideration for outcomes such as paravalvular regurgitation, post-operative transvalvular gradient and pacemaker implantation rates. Overall, the quality of data was deemed to be moderate and all studies were retrospective analyses, although several studies used prospectively collected databases. All included studies were comparative, although none were randomized. There is also limited long-term data given the recent development of the two valves and in time, analysis of long-term data will be necessary for assessing ongoing outcomes with this technology.

This meta-analysis comparing SURD and RDV demonstrated no difference in mortality or stroke rates. There was a significant reduction in cross-clamp and CPB times associated with SURD. This may be of benefit for patients requiring multiple concomitant procedures and increase the utility of minimally invasive valve replacement. However, SURD was associated with higher post-operative transvalvular gradients and a higher incidence of paravalvular regurgitation.