The increasing popularity of less invasive procedures has affected nearly every surgical specialty, including cardiac surgery. Patients requiring surgery frequently seek minimally invasive operations that promise smaller-incisions and, ideally, better tolerated-incisions. Consequently, valve disease specialists have been charged with reforming valve interventions to minimize the burden of surgery without compromising overall cardiovascular care. Advancements in imaging, surgical instrumentation, and robotic technology have enabled surgeons to perform complex cardiac surgical procedures through small incisions, often eliminating the need for sternotomy or cardiopulmonary bypass (Figure 1) (1-3). Enter the lower hemisternotomy, thoracoscopy-assisted right minithoracotomy, and robot-assisted port access approaches to mitral valve surgery. Each approach carries distinct advantages and disadvantages when compared to conventional sternotomy, as well as when compared to one another. In the current era, we believe that thoracoscopic mitral valve surgery has supplanted median sternotomy as the optimal surgical approach. This opinion is based on reproducible clinical efficacy, minimal incremental resource utilization, and capacity for widespread adoption.

Figure 1 Standard setup for thoracoscopic mitral valve surgery. (A) Thoracoscopic approach via a right minithoracotomy with femoral vessel cannulation; (B) the surgery is performed through a two-inch utility incision.

Requisite to implementing a minimally invasive approach is the performance of the new procedure to be equal or superior to that of the reference standard approach. Therefore, thoracoscopic mitral valve surgery must be as safe, effective, and durable as the traditional “open” approach. To date, no comparison study has shown a significant difference in operative mortality when comparing minimally invasive mitral valve surgery to that through median sternotomy (4-10). Initial experiences with thoracoscopic mitral valve surgery documented mortality rates near 10% (11). However, more recent studies, including our own, reproducibly demonstrate mortality rates less than 1%, particularly in the case of degenerative mitral valve disease (4,5,7,12). Furthermore, a recent meta-analysis that pooled over 20,000 patients reported no difference in operative mortality between video-assisted and conventional sternotomy approaches (13). Intermediate and long-term survival is equally encouraging. Propensity score matched comparisons of minimally invasive and sternotomy approaches to mitral valve surgery reveal similar survival up to a decade after surgery (5-7). In our analysis of 402 well-matched patient pairs with mitral regurgitation of any etiology, 9-year survival was 96% after thoracoscopic mitral valve repair, and 89% following the conventional approach (7).

Advocates against thoracoscopic mitral valve surgery argue that the increased distance from the mitral valve may limit the repair techniques available to the surgeon, thereby hindering repair rates and repair durability. However, the approach through the right anterolateral thoracotomy actually provides a more en face view of the mitral valve, and a more medial incision yields a very manageable distance such that all sutures may be tied by hand (Figure 2). Examination of the literature demonstrates that operative approach does not appear to significantly impact the likelihood of successful mitral valve repair (7,14) or durability (15). In a propensity score matched comparison of patients with degenerative mitral regurgitation, moderate mitral regurgitation only developed in 16 patients (4%) and recurrence did not differ by surgical approach (15). Thoracoscopic mitral valve repair is also effective in treating Barlow’s disease. In a series of 145 patients, Borger and colleagues successfully repaired 95% through a right minithoracotomy, and 10-year freedom from reoperation was 94%±3% (16). 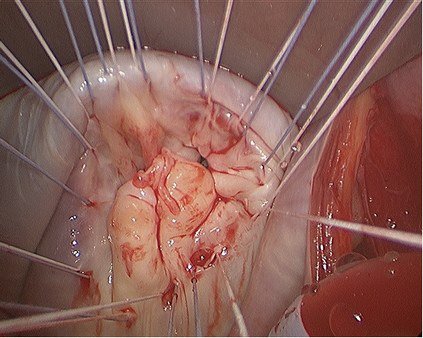 Thoracoscopic mitral valve surgery may also permit earlier recovery of pulmonary function. A number of studies, including meta-analyses, documented reductions in the duration of mechanical ventilation when minimally invasive approaches were utilized (8,10,12,13,19,20,25,26). Yet other experienced centers have not shown such a benefit, including our own (7,8). Expedited extubation may result from enhanced preservation of mechanical chest wall functionality, or alternatively from different management protocols.

Less invasive mitral valve surgery reproducibly shortens ICU and hospital length of stay compared to that through median sternotomy (6,19,20,22,27,28). This benefit may be more pronounced in sternal-sparing mitral valve surgery. More than half of the studies identified in a meta-analysis by Modi and colleagues reported significant reductions in the length of hospital stay (9). Although the overall meta-analysis failed to demonstrate a significant reduction in length of hospital stay, more recent meta-analyses (10,13) that focused only on sternal-sparing surgery documented significantly shorter ICU [weighted mean difference (WMD), −19.4 hour; 95% CI, −27.1 to −11.6 hours] and hospital stays (WMD, −2.0 days; 95% CI, −2.4 to −1.5 days) (13). This benefit has also been observed in higher risk patient populations, including the elderly (29) and obese (30).

Postoperative pain and scar cosmesis would presumably be improved by smaller incisions but little evidence exists that examines these endpoints. In a survey of 187 patients who underwent thoracoscopy-assisted mitral valve repair, 93% of patients were highly satisfied with the procedure and reported mild or no postoperative pain, and 99% of patients believed their scar was aesthetically pleasing (31). When 22 patients who underwent reoperative mitral valve surgery via minithoracotomy after previous median sternotomy were interviewed, they all felt their recovery was more rapid and less painful than after their original sternotomy (32). Finally, one experienced center documented that patients return to normal activity five weeks earlier after thoracoscopy-assisted mitral valve surgery than after a median sternotomy (26).

Procedural cost and resource utilization are increasingly important factors in evaluating different treatments. Multiple groups demonstrated that shorter hospital stays after less invasive mitral valve surgery translate to cost saving ranging from 7% to 34% (18,19,33). Further economic benefit may stem from lower rehabilitation requirements and lower rates of early rehospitaliztion (7,18). In an in-depth economic analysis of cost differences between minimally invasive and sternotomy approaches to mitral valve surgery, Iribarne and colleagues concluded that minimally invasive mitral valve surgery was both cost effective and cost saving: minimally invasive operations were associated with average savings of greater than $9,000 per patient (34). This cost-savings benefit was confirmed in a multi-institutional database (35) and meta-analysis (13).

It is important to note that robot-assisted port access mitral valve surgery has become increasingly adopted at certain reference centers. Initial experience with robotic technology has been quite favorable (22,36-39). Experienced robotic surgeons have demonstrated that the standard surgical mitral repair techniques are replicated with robot assistance and allow for safe and effective repair of all types of leaflet prolapse (36,39,40). In addition to the benefit of reduced ICU and hospital stays, postoperative survival and durability of mitral valve repair have consistently and reproducibly been comparable to that of the reference standard approach, median sternotomy (36,38,40,41). However, little to no evidence objectively compares robot-assisted mitral valve surgery to thoracoscopic surgery. Rather, most analyses combine thoracoscopy and robot-assisted mitral valve surgery into the same group.

We prefer thoracoscopic mitral valve surgery over that of totally endoscopic, robot-assisted mitral valve surgery because tactile feedback is maintained, a knot pushing device is unnecessary, central aortic cannulation is possible, cross-clamp and cardiopulmonary bypass times are shorter, and we believe the procedure is more conducive to teaching trainees. The learning curve associated with both thoracoscopic and robotic mitral valve surgery is clear, but the two have not been directly compared. Holzhey and colleagues analyzed 3,895 mitral valve surgeries performed via right minithoracotomy by 17 surgeons (42). Using cumulative sum sequential probability analysis, they concluded that the typical number of operations to overcome the minimally invasive learning curve was between 75 and 125. Alternatively, Chitwood and colleagues demonstrated that rates of repair failure fell from 7% to 4.5% after the first 100 robotic mitral valve procedures (43), but it is unclear if further experience with robotic surgery is required to obtain optimal results.

Risks of thoracoscopic mitral valve surgery depend on the cannulation strategy employed. The increased utilization of peripheral cannulation and endoaortic balloon occlusion have seemingly translated to an increased perioperative risk of stroke (RR, 1.79; 95% CI, 1.35 to 2.38), aortic dissection/injury (RR, 5.68; 95% CI, 1.23 to 26.17), and groin infection (RR, 5.62; 95% CI, 1.26 to 25.13) (10). However, a recent meta-analysis demonstrated that the risk of stroke did not differ between right minithoracotomy and sternotomy approaches (13). We opt for central aortic cannulation in patients with significant peripheral arterial disease or atheromata in the descending aorta. As such, we have not noticed an increased risk of stroke when a thoracoscopic approach is employed (7,44). Furthermore, routine utilization of a Chitwood clamp for aortic cross-clamping minimizes the risk of iatrogenic aortic dissection from endoaortic balloon occlusion (45).

Although we believe thoracoscopy-assisted mitral valve surgery to be the most favorable approach, we do not believe it absolute in all situations. Although a number of series demonstrate excellent outcomes of thoracoscopic mitral valve surgery in higher risk groups, including the elderly (29), obese (30), reoperative cardiac surgery patients (46) or even those with significant left ventricular dysfunction (47), the choice of operative approach must be made on an individual basis. Operative approach should be tailored to patient preferences, the anatomy and disease etiology, the comfort level of the surgeon with the approach to be utilized, and other risk factors that may make one approach preferable to others.