Home > Vol 1, No 4 (November 2012) > Biomarkers and prognostic factors for mesothelioma

Malignant pleural mesothelioma (MPM) desperately needs non-invasive, accurate prognostication for many reasons: a median survival of 12 months with treatment with first line therapy (1); a median survival of 24 months at best when treated in a multimodal approach with either neoadjuvant chemotherapy and surgery with or without radiation therapy or postoperative chemotherapy (2); a staging system that is not ideal, considering the diffuse nature of the disease and its variable biology (3); difficult, non-R0 surgical cytoreductions that, even with specialized centers have times to progression ranging from 7-12 months, and operative mortalities of 5% (4). MPM patients tend to be older individuals who are frequently functionally impaired and may have difficulty with aggressive therapy; however, there are a cadre of MPM patients who, with favorable biology and a multimodal approach, benefit from intense therapy. Prognostication in MPM must be able to differentiate among patients, hopefully at the time of diagnosis, in whom it is justified to offer potentially hazardous standards of care or novel protocols. If such prognostication implies a short time to death, either palliative therapy or no therapy may be appropriate; however, if prognostic factors indicate that long term survival is possible, a more aggressive approach may be prescribed. Obviously, however, prognostication cannot work in a vacuum and with time prognostication must be closely linked with prediction of response to therapy, in that a patient with a poor prognostic, but predictably sensitive to therapy, tumor may actually benefit from such therapy.

Prognostication in MPM has been approached by studying many variables, usually one at a time, at many centers, all with limited numbers of patients. Univariate and multivariate analyses are performed, yet the majority of the findings remain unvalidated in other MPM populations. The variables can be purely clinical, such as patient demographics, which are frequently combined with standard laboratory values including white blood cell count or platelet count. Other investigators have concentrated on radiologic parameters at presentation as determined by scrutiny of computerized tomograms (CT) or positron emission tomography (PET) alone or fused with CT. Finally, a molecular pathologic approach, using state of the art platforms such as genomics, microRNA, epigenetics, or proteomics is used in order to define single or combinations of candidate prognostic biomarkers from tissue or blood.

Clinical factors for the prognostication of MPM

The best-known clinical prognostic scoring systems for MPM have originated from European Organisation for Research and Treatment of Cancer (EORTC) and Cancer and Leukemia Group B (CALGB) (5), and use a combination of biological and clinical factors (Table 1). Poor performance status, non-epithelioid histology, male gender, low hemoglobin, high platelet count, high white blood cell count, and high lactate dehydrogenase (LDH) were found to be poor prognostic indicators in mesothelioma. The EORTC model was validated at St. Bartholomew’s Hospital in a group of 145 patients treated in sequential phase II chemotherapy trials (16). As seen in Table 1, there have been a number of mostly retrospective analyses of clinical variables alone or in combination with clinical variables laboratory parameters since the EORTC and CALGB studies were reported. A recurring theme in patients who have not had surgical resection includes non-epithelial histotype, low hemoglobin, and high WBC as poor prognostic indicators in these studies. As a follow-up on the EORTC data, a prognostic index for progression free survival revealed that age, histotype, stage, performance status, hemoglobin (9) and WBC levels were independent predictors time to progression. For MPM patients undergoing surgical resection, an IASLC/International Mesothelioma Interest Group sponsored retrospective registry of 3,101 patients from 15 centers on 4 continents has described “core” prognostic variables as stage, histotype, gender, age, and treatment intent (curative or palliative) (Rusch in press). The prognostic significance of other demographic factors including adjuvant therapy, WBC, hgb, smoking history, asbestos history, performance status, chest pain, and weight loss are also being investigated. 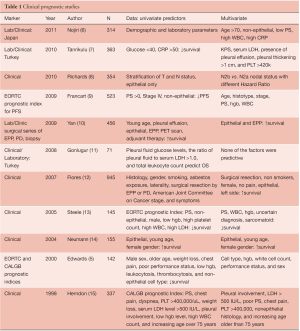 Quantification of the standardized uptake value (SUV) for PET scanning as well as novel CT techniques have also been investigated in mesothelioma for prognostic reliability (Table 2). Low SUV and epithelial histology predict the best survival, whereas high SUV and nonepithelial histology indicate the worst survival. In a multivariate analysis of 65 patients with MPM, median survival was 14 and 24 months for the high and low SUV groups, respectively. High SUV tumors were associated with 3.3 times greater risk of death than low SUV tumors (P=0.03) (21). Gerbaudo et al. (22) reported that the intensity of FDG uptake by mesothelioma correlates poorly with histology, but well with surgical stage. A recent “best evidence” report from Sharif et al.(18) addressed whether PET is useful in the diagnosis and prognosis of MPM. Altogether only 15 of 136 papers represented the best evidence studies, and these revealed that malignant disease had a higher SUV (6.5±3.4 vs. 0.8±0.6; P<0.001) than benign pleural disease. Shorter median survival (9.7 vs. 21 months; P=0.02) was associated with high SUV (>10) compared to low SUV (<10). Overall, PET accurately diagnoses MPM and predicts survival and disease recurrence. With both PET as well as computerized tomographic studies, there has been an increasing emphasis on the role of volume measurements as a prognostic variable. In a study by Nowak et al. (20), volumetric FDG-PET parameters were more predictive of survival than tumor-node-metastasis staging in patients with non-sarcomatoid disease, suggesting that tumor volume and glycolytic activity may be more important determinants of prognosis in malignant pleural mesothelioma than anatomic extent of disease. Sarcomatoid histology, however, remained the strongest prognostic factor. In a study by Lee et al. (19), multivariate analysis adjusted for treatment modality showed that metabolic tumor volume and total lesion glycolysis were independent factors associated with tumor progression. Time to tumor progression was shorter in patients with a high volume-based parameter of PET than in those with a low value. Following up on earlier studies by Pass et al. (23) regarding the influence of tumor volume of survival and progression of surgically treated mesothelioma patients, Gill et al. (17) reported that CT-derived tumor volume can be used to stratify survival of 88 patients with epithelial mesothelioma after extrapleural pneumonectomy. In univariate analysis, tumor volume, hemoglobin concentration, platelet count, pathologic TNM category, and administration of adjuvant chemotherapy or radiation therapy met the criteria for inclusion in the reverse stepwise regression analysis. In the final model, tumor volume, hemoglobin concentration, and administration of adjuvant chemotherapy or radiotherapy were identified as independently associated with overall survival. Further multicenter validation of these CT volume findings is planned.

There are a multitude of studies investigating single or multiple genes in tissue, proteins, or circuiting blood based biomarkers for predicting MPM survival (Table 3). Global molecular prognostication of mesothelioma using gene expression array technology was first performed by Gordon et al. (55) using the 12,000 U95 Affymetrix gene chip. A four-gene expression ratio test was able to predict treatment-related patient outcome in mesothelioma, independent of the histologic subtype of the tumor. In a follow-up publication, these MPM prognostic genes and gene ratio-based prognostic tests predicted clinical outcome in a separate cohort of 39 independent MPM tumor specimens in a statistically significant manner (40). Using similar technology, Pass et al. (56) have reported a 27-gene expression array for mesothelioma prognostication. The groups predicted by the gene classifier recapitulated the actual time to progression and survival of the test set with 95.2% accuracy using tenfold cross validation. There has, however, been variability in the gene sets and results of these prognostic tests when used in other MPM cohorts. Affymetrix U133A microarray analysis on 99 pleural mesotheliomas from the Memorial Sloan-Kettering (MSK) Cancer Center revealed that advanced-stage, sarcomatous histology and P16/CDKN2A homozygous deletion to be significant, independent, adverse prognostic factors. Examination of the gene expression correlates of survival showed that more aggressive mesotheliomas expressed higher levels of Aurora kinases A and B. Moreover, evaluation of three recently published microarray-based outcome prediction models in the MSK cohort revealed accuracies from 63% to 67%, consistently lower than reported (47). At present, there are no validated gene sets for prognostication of MPM. Tumor tissue examination has revealed the presence of a single microRNA, mir-29c*, to be associated with improved time to progression and overall survival, but needs further validation (38). High nuclear grade has also been associated with poor survival in multivariate analyses (33). Some of the more recently published blood-based biomarkers have included neutrophil lymphocyte ratios (25,31,32) demonstrating poor prognosis for those patients having a low ratio, as well as elevated levels of SMRP and osteopontin showing correlation with shorter survival (46). Circulating endothelial cell (CEC) count has been positively correlated with intratumoral microvessel density and an elevated CEC count was significantly associated with a poor prognosis. Moreover, a multivariate analysis showed that higher CEC count was a significant and independent factor to predict a poor prognosis (24). 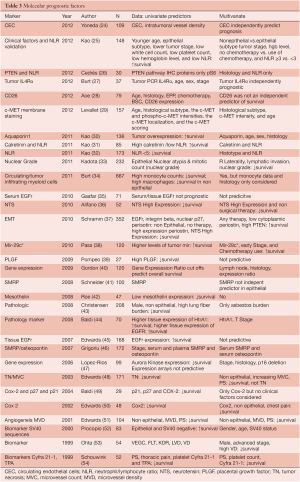 The future of prognostic biomarkers in MPM will most likely involve a multi-institutional consortium of centers which will harvest tissue, blood and other specimens in a protocol using the same standard operating procedures in order to minimize extraneous differences which could lead to false positive results. As new platforms develop, including analysis of other short RNA species, autoantibodies, and circulating tumor cells, along with new therapies, it will be crucial to make sure that an ongoing registry which incorporates robust demographics as well as documentation of specimen archiving be available to the Mesothelioma community. At this time the National Mesothelioma Virtual Tissue Bank (57) fulfills that role in the United States, and is adding new sites to ensure that reagents and tissues for MPM prognostication will be available.