Despite its relative rarity, type A aortic dissection (AAD) remains a serious and often lethal disease, with in-hospital mortality ranging between 16 and 83% (1). Older age represents a risk factor for surgical treatment (2) and previously published data from The International Registry of Acute Aortic Dissection (IRAD) found age ≥70 years as a significant predictor of in-hospital surgical mortality (3). In contrast, a meta-analysis published in 2011 (4) and focused on octogenarian patients showed satisfactory immediate survival rate after surgery and suggested a confident approach toward emergency repair in this complex subset of patients. Enhancements in diagnostics, surgical techniques and post-operative care have certainly improved over the last years and more recent registry reports and retrospective analysis have revealed very good results after AAD surgical repair in the aged population, supporting surgical intervention even in very elderly patients (5,6). We investigated the current evidence on the surgical outcome of AAD repair in elderly patients by conducting a contemporary systematic review and meta-analysis of the latest published studies on this topic.

A systematic literature search was conducted through PubMed for any study published in the last five years on aortic dissection; an additional search was performed in the same period of time aiming at studies evaluating the surgical outcomes of type A aortic dissection repair in the elderly. Searching phrases used were: [“Aortic Dissection” (all fields)] and a combination of this term with the subsequent terms: [elderly (all fields)], {elderly [MeSH term]}, [aged (all fields)], {aged [MeSH term]}, [aging (all fields)], {aging [MeSH term]}, [geriatrics (all fields)] and {geriatrics [MeSH term]}. To further identify the papers of interest, a cross check with the same searching criteria was conducted on Scopus. The five year time period was used in consideration of a previous meta-analysis published in 2011 on a similar topic of interest (4). Two reviewers (V.D.B. and P.C.) independently assessed the online databases (last access on the 3rd May 2016), screening titles and abstracts. The full-text articles were then obtained for all potentially eligible articles that clearly met the inclusion criteria and were reviewed separately if either reviewer considered the manuscript as being eligible. Any disagreements were resolved by consensus.

All data were independently extracted from the studies by two investigators (V.D.B. and P.C.). The final results were reviewed by the senior reviewer (H.V.). Our main outcomes of interest were short-term post-operative mortality, post-operative stroke and acute post-operative kidney injury (AKI). Data on those main outcomes were retrieved from the original articles. Short-term mortality was defined as in-hospital or 30-days post-operative mortality. In cases where both timing was available, only the in-hospital mortality was used. Stroke was defined as permanent post-operative neurological events as stated by the papers. Acute kidney injury was only considered if requiring temporary or permanent hemofiltration, according to the article description. The definition of ‘elderly’ varied among the studies: therefore, we included in the meta-analysis only the studies involving patients with age ≥70 years in the study population and conducted a sub-analysis on octogenarians only. Figure 1 describes the research protocol and selection process. 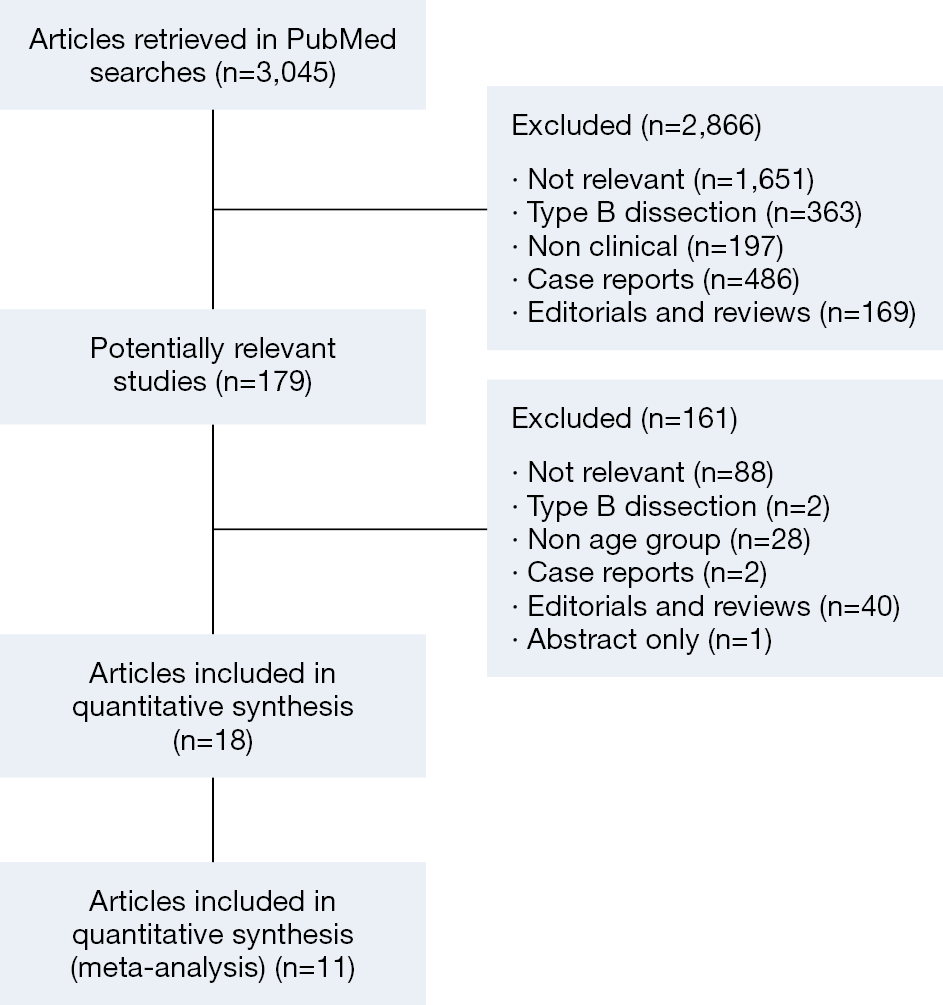 A total of 3,045 studies were found on online databases. After initial screening, 179 studies were considered potentially relevant. A further screening of abstracts and full texts was conducted and a final sample of 18 studies considered relevant to our review (1,2,5,7-20). Of these, seven were excluded from the quantitative meta-analysis for different reasons. Table 1 describes the included and excluded studies, their main characteristics and the reason for exclusion from quantitative analysis. Four papers did not have a young control group and one paper considered medical treatment only. Two important papers from the German Registry for acute aortic dissection type A (GERAADA) have addressed the topic of surgical treatment in elderly patients (5,18). We did not include them in the meta-analysis because one did not have a younger cohort (<70 years old) and one did not report our main outcomes in a specific group of age, but analyzed a linear correlation between outcome and age. One paper (7) had no specific age cut-off, but reported mortality and stroke rate for different age groups. This was included in the meta-analysis and in this case we decided to consider 70 years old as cut-off for elderly group and the mortality and stroke rates were derived accordingly. 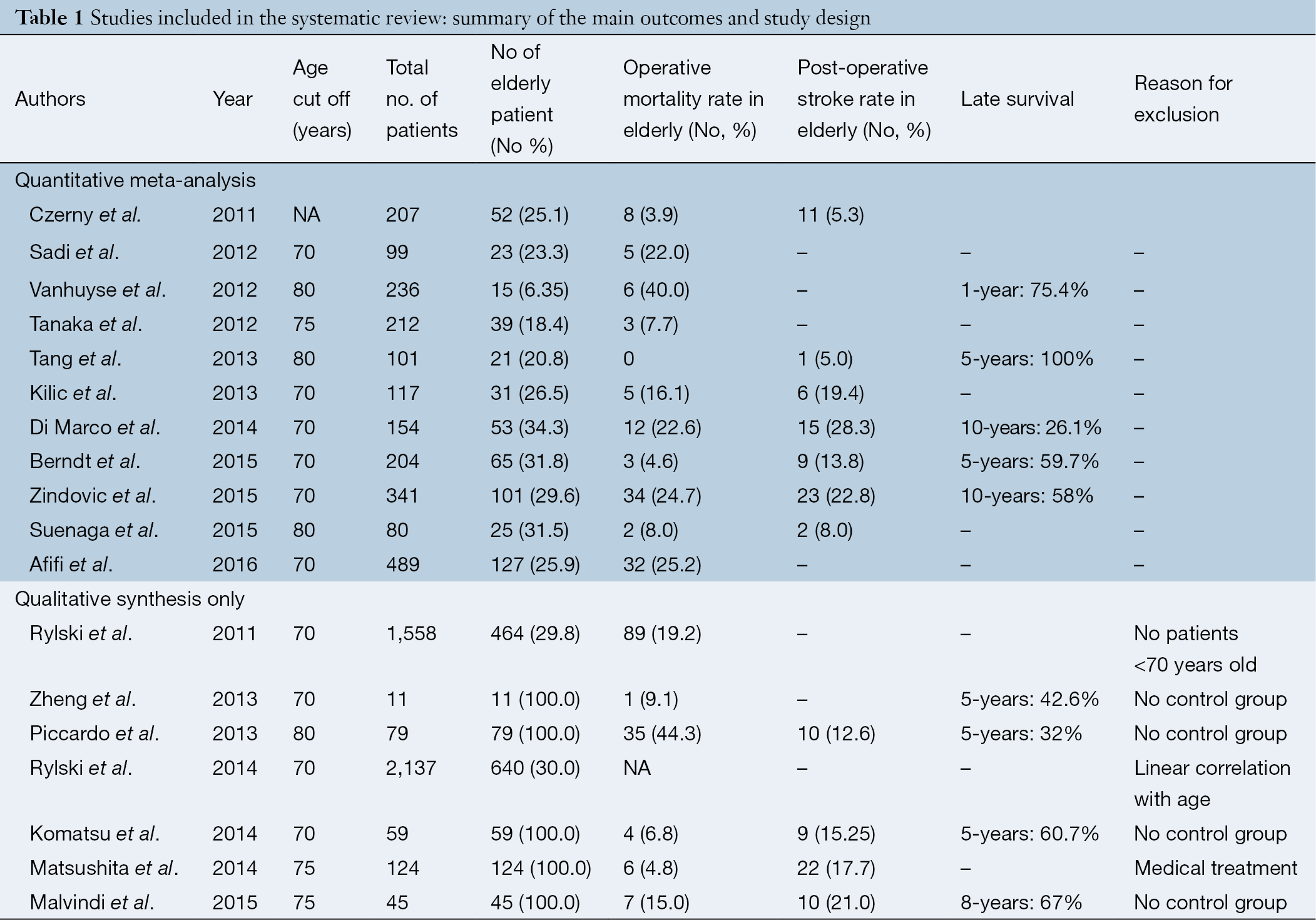 The intra-operative characteristics for the elderly patients are described in Table 2: these data were obtainable only from 11 studies. The mean cardiopulmonary bypass time and aortic cross clamp time ranged from 150 to 291.6 minutes and 70 to 191.3 minutes respectively. The deep hypothermic circulatory arrest time ranged from 18 to 99.7 minutes.

Due to the continuously increasing life-expectancy in the western countries, a growing number of elderly patients are affected by AAD and frequently undergo complicated and very high risk surgical procedures to repair it. Without surgical intervention, about 75% of the patients die within two weeks of the onset of symptoms (18) and therefore the surgeon faces a therapeutic dilemma: to operate or not? Several studies have shown that surgery is preferable to the medical management (4,18), but the results of surgical treatment in this subset of patients have been reported only in retrospective analysis or a small proportion of patients from international registries. A previous meta-analysis focused on octogenarians (4) have already demonstrated the feasibility of surgical repair of AAD in elderly patients. In their analysis, the authors supported a confident approach towards emergency repair in the elderly. Our results support this conclusion. In our analysis, although the early mortality rate was higher in the elderly group, with a pooled RR of 2.27, postoperative stroke and AKI rate seemed not to be affected by age. This is in line with the recent report of the GERAADA (18). In their analysis involving 640 elderly patients (>70 years) out of a population of 2,137 type A aortic dissections, the authors, while reporting a significant linear correlation between age and operative mortality risk, have found only a weak association between age and neurological events (18). The pooled mortality in our analysis was still very high (18.8% for the overall studies). In the octogenarians though, the short-term mortality rate appeared to be better (30.9%) compared to a previous meta-analysis on the same population of study (4). Low incidences of postoperative stroke have been also reported by other authors, although in small retrospectively analyzed samples (11,14). Piccardo and colleagues (17), in their retrospective analysis of 79 octogenarians undergoing type A aortic dissection surgery, highlighted the importance of the clinical presentation as a factor affecting the surgical outcome and demonstrated that in uncomplicated AAD, early and midterm outcomes are excellent and similar to those in published series of younger patients. Even in our analysis, the incidence of stroke appeared to be acceptable and not affected by age. In fact, the pooled analysis demonstrated a RR of 1.15 with a 95% confidence intervals of 0.89–1.50 (P=0.28). The definitions of stroke were not univocal between the studies, but the incidences appeared to be similar in the two groups, ranging between 5% and 28.3% in the elderly group and between 7.5% and 20.7% in the younger groups.

Similar results have been found with the analysis of the AKI. In this case, the pooled analysis showed results in favor of the elderly population, although they were not significant. The incidence of this complication was between 0 and 16% in the elderly group and between 3.9% and 23.02% in the young group: in this case, AKI seems to be more frequent in the younger population, although this difference was not significant.

In terms of surgical procedures performed, there is a tendency toward a less aggressive surgical approach in elderly patients as it is considered to be safer and more effective than complex surgery (18). This has been clearly showed with the GERAADA registry where there was a correlation between age and type of surgical procedures performed, with a higher number of supra-coronary aortic replacement, in the elderly and a higher number of infra-coronary replacements in young patients. A less aggressive surgical approach seems to be favorable in elderly patients and for some authors is a key factor in reducing reducing operative time and mortality (17). In consideration of the short life expectancy, especially in octogenarians, priority should be given to prevent aortic rupture and complete the repair of the acute dissection. In this sense, one of the main consideration to make is regarding the life expectancy after complicated surgical repairs. Interestingly, the survival rate in the papers considered in the meta-analysis was acceptable, ranging from 32% to 100% at 5 years. Moreover, Suenaga and colleagues (14) have found no significant difference between the survival rate of octogenarians undergoing type A dissection surgery and the overall octogenarians population in the same area, supporting the idea that if the patients survive to the immediate post-operative outcome, the life expectancy could be similar to the general age-matched population. Even the quality of life after surgery appears to be reasonable as shown by Tang and colleagues (6). In their study, focused on octogenarians, the authors found good results in terms of emotional and social well-being, albeit with slightly worse physical functioning. They have also reported exceptional short-term results, with an in-hospital mortality rate of 0% and 100% survival rate at five years (6). The authors have attributed their very good results to their protocol of approach that avoids delays in transfer, transport and diagnosis confirmation, allowing precarious patients to be supported on cardio-pulmonary bypass as quick as possible.

The main limitation of this meta-analysis is the presence of only retrospective studies with small sample size and wide-ranging long-term survival results. Another limitation could be represented by an intrinsic selection bias. Most surgeons would operate almost all the young patients with AAD, although they would be more selective when the patient is elder. It is complicated to verify this assumption, as no clear data are obtainable regarding the reasons for refusing surgery in this sub-group of patients.

In conclusion, AAD repair in elderly, whilst associated with a higher surgical mortality rate, can be performed with acceptable short-term outcomes and reasonable mid-term survival rates.