A patient’s underlying comorbidities play a pivotal role in the outcomes of surgical aortic valve replacement (AVR). Contemporary evaluation of these underlying comorbidities is often made through risk predictive models and mortality risk scores, such as the Society of Thoracic Surgeons Predictive Risk of Mortality (STS-PROM) and the European System for Cardiac Risk Evaluation (EuroSCORE) (1-3). One of the few comorbidities consistently present in these predictive models is the history of a prior sternotomy. In the STS Cardiac Surgery Risk Model (STS-CSRM), reoperative AVR (re-AVR) is associated with 2.1 times the odds of operative mortality (OR: 2.11, 95% CI: 1.78–2.49) (4). However, the aggregated risk of concomitant comorbidities is often underestimated in high-risk populations (5). In these patients, the presence of left ventricular ejection fraction (LVEF) and impaired renal function are consistently associated with worse outcomes (6), with outstanding discriminatory power (7).

Low preoperative LVEF is independently associated with worse outcomes after AVR and is a proxy for the patient’s underlying ventricular contractility, an important component in low-gradient aortic stenosis (8,9). In the STS-CSRM, every 10 unit decrease in LVEF is associated with 1.09 times the odds of operative mortality (OR: 1.09, 95% CI: 1.05–1.14) (4).

Impaired renal function, even when mild, has been associated with increased morbidity and mortality after cardiac surgery (6). Severe renal impairment, defined as dialysis dependence, result in 2.85 times the odds of operative mortality according to the STS-CSRM (OR: 2.85, 95% CI: 2.35–3.45) (4).

Patients undergoing re-AVR who present with low LVEF and concomitant renal impairment represent a unique population whose actual risk of mortality may be underestimated by population-based risk models, given their limited accuracy in high-risk populations (5). The use of select highly-predictive baseline characteristics to assess the surgical risk of these patients has shown encouraging results (7). Our aim was to compare the outcomes of re-AVR patients, stratified by their underlying LVEF and assess its interrelation with concomitant renal impairment. We hypothesized that re-operative AVR patients with low preoperative LVEF and impaired renal function represent a prohibitively high-risk population with poor long-term outcomes, therefore providing a parsimonious risk estimation for patients that may benefit from transcatheter therapies.

With permission from the Partners Institutional Review Board, we identified 232 patients ages 18 to 80 years with a previous sternotomy who underwent isolated, re-AVR, between January 2002 and March 2013 at the Brigham and Women’s Hospital. Patients older than 80 years were excluded to reduce possible confounding introduced by unmeasured frailty in this age group. All re-AVR patients were further stratified into groups: “Low” LVEF ≤35% (LEF), n=37 and “High” LVEF >35% (HEF), n=195. Patient characteristics, perioperative data, laboratory test results and in-hospital outcomes were recorded at the time of presentation. Data were extracted from hospital electronic medical records and defined according to the STS Adult Cardiac database version 2.52 unless otherwise noted. STS-PROM were calculated using the 2008 algorithm. Patients were considered to have renal insufficiency if they had a documented history of renal failure or a preoperative creatinine >2.0 mg/dL. Operative mortality was defined as any death occurring in-house during the index admission, or within 30 days of surgery, if discharged. Long-term survival data were obtained from our internal research data repository, routine patient follow-up, and our state Department of Public Health. Follow-up time was calculated in months from the date of surgery to the date of death or May 31, 2014, and censored at last known clinical contact. There was a 99% follow-up for patient survival and the mean follow-up time was 56.8±37.7 months, for a total of 1,117 patient years. Primary outcomes of interest were operative mortality and long-term survival. Secondary outcomes included operative morbidity and length of stay.

Normally distributed continuous variables are expressed as mean and standard deviation and were compared using Student’s t-test with Levene’s test for homogeneity of variance. Non-normally distributed variables are expressed as median and interquartile range (IQR) and were compared using Mann-Whitney U tests. Categorical variables are presented as frequencies and percentages and compared using χ2 or Fisher’s exact tests. Longitudinal survival was estimated by Kaplan-Meier analyses. A sparse Cox proportional hazards model was used to evaluate the adjusted risk of low LVEF and renal insufficiency on long-term survival and to test for interactions between them. LVEF and renal insufficiency were selected based on their association with cumulative unadjusted survival and clinical relevance in the scientific literature which mirrored their performance in our unadjusted survival analysis. Age and gender were non-contributory in the survival analysis and were therefore excluded from the final model. All analyses were conducted using IBM SPSS Statistics version 22.0 (IBM Corporation, Armonk, NY, USA) and P≤0.05 was the criterion for significance. 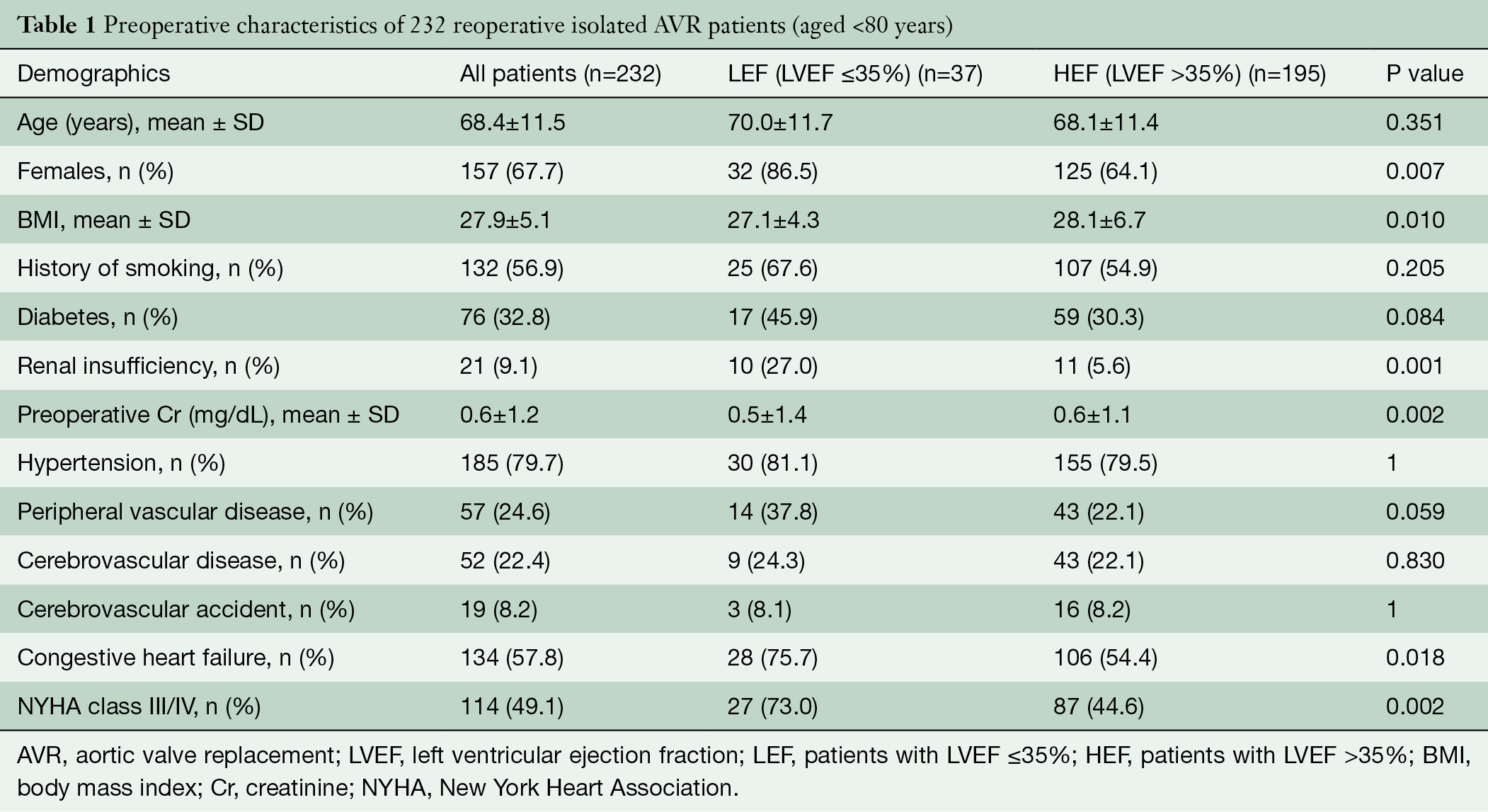 The most common previous surgeries were isolated coronary artery bypass graft in 53.9% patients, followed by isolated AVR in 22.4% and were not significantly different between the two groups (Table 2). The median interval time from the initial sternotomy to the re-AVR was 9.8 (IQR 6.3–13.5) years in the LEF group and 9.1 (IQR 5.8–12.4) years in the HEF group (P≤0.644). There were 25 patients who underwent a second reoperation; only 4 of them were in the LEF group. 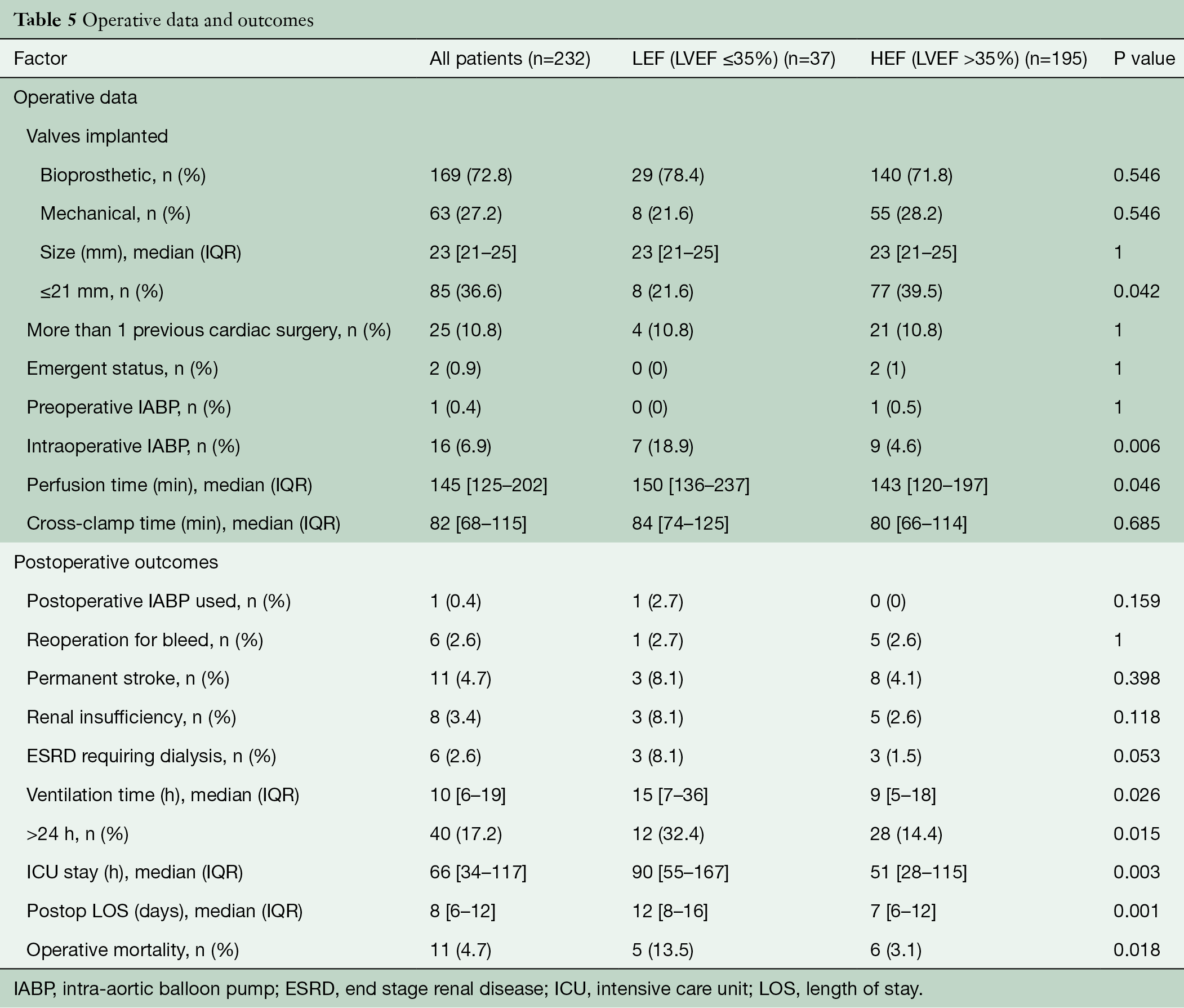 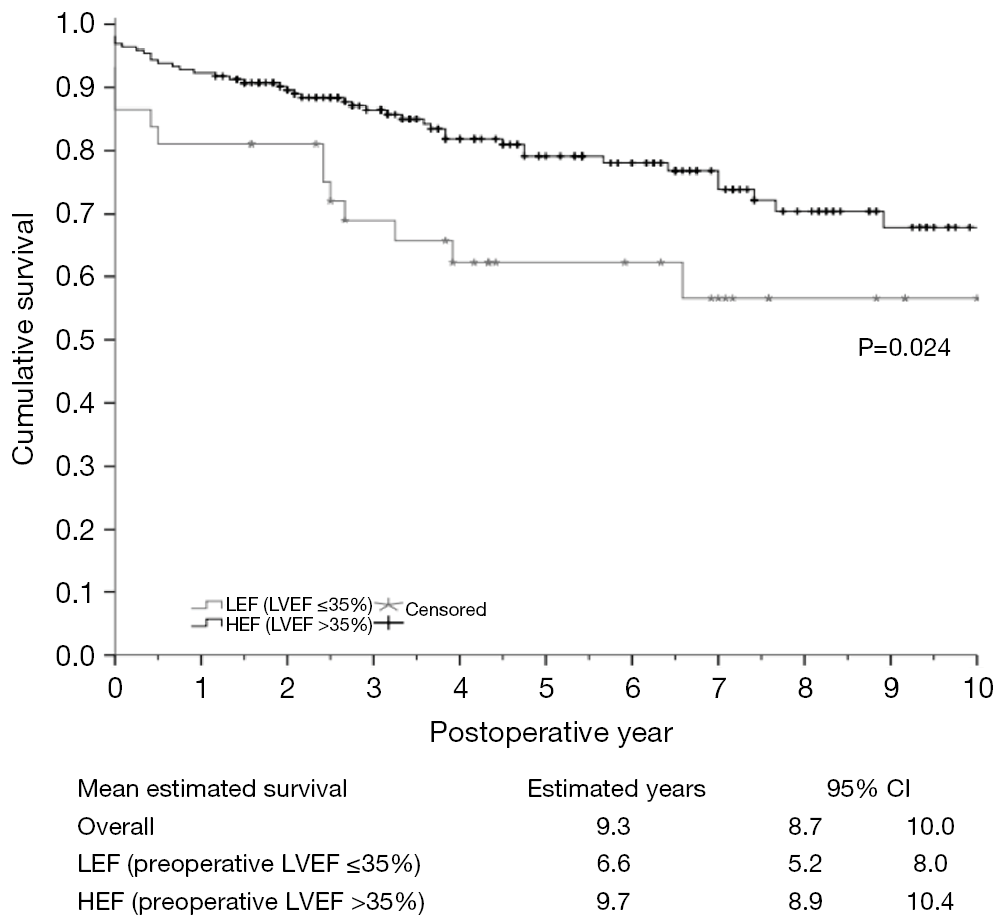 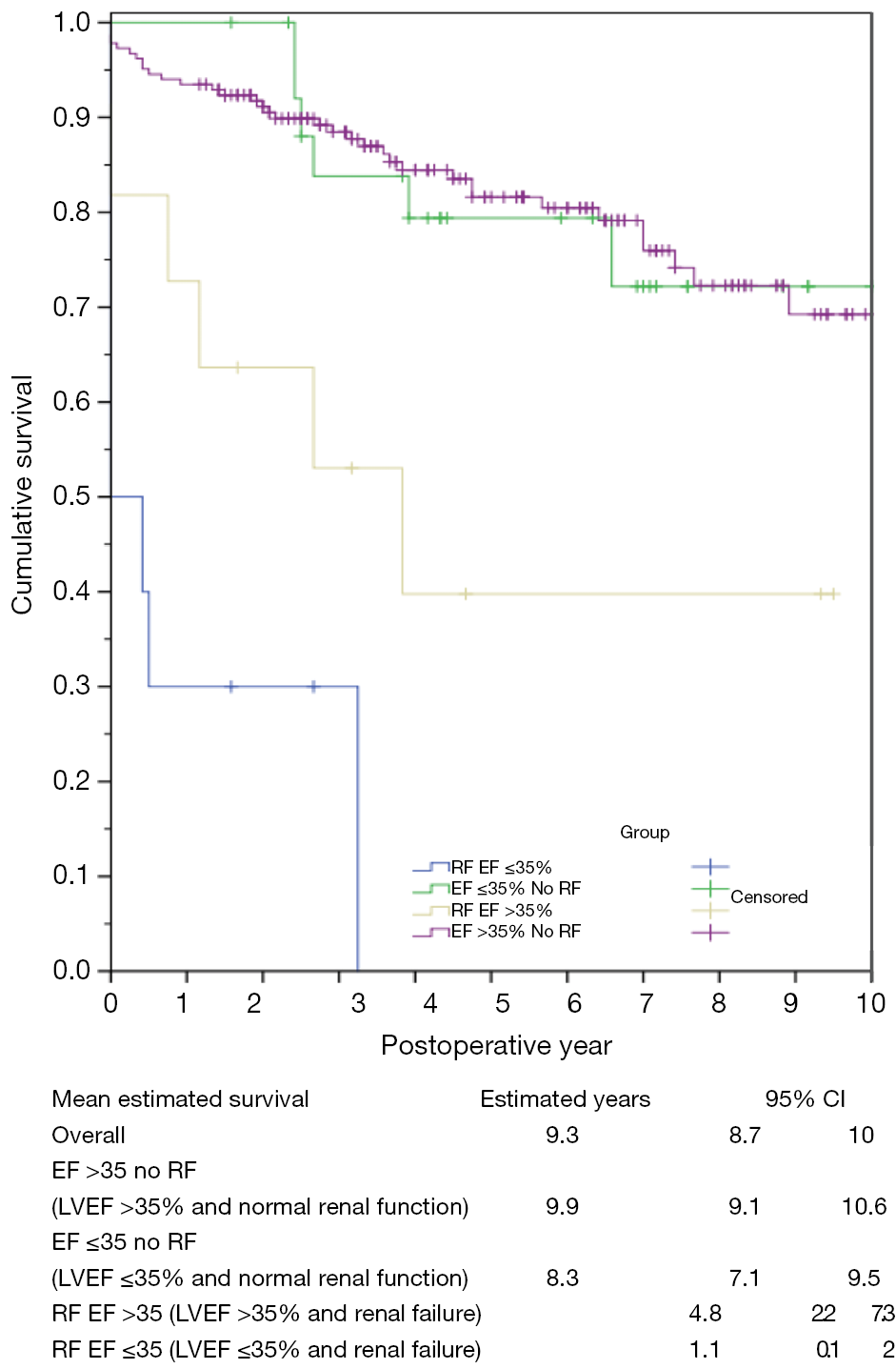 In order to determine the adjusted effect of low LVEF and creatinine on long-term survival, we ran a sparse Cox proportional hazards model. In this high-risk population, both creatinine, expressed in 1 mg/dL increments, (HR =4.29 95% CI: 1.830–10.032, P=0.001) and LEF group (HR =5.36, 95% CI: 1.068–26.638, P=0.041) were significant predictors of decreased cumulative survival. In accordance with our unadjusted survival analysis, we observed a significant interaction between LVEF and preoperative creatinine (HR =7.28, 95% CI: 3.120–17.003, P=0.001), explaining the effect of renal impairment across the different levels of LVEF. Age, was non-contributory in our analysis and was therefore not included in the final model.

Our study has several noteworthy findings. Patients undergoing re-AVR with low LVEF have a significantly higher operative mortality and longer ventilation, ICU, and hospitalization times. Unadjusted long-term survival was also lower in patients with low LVEF. Interestingly, when stratified by renal function, we observed an unfavorable survival difference for patients with low LVEF in patients with renal insufficiency (preoperative creatinine >2.0 mg/dL) but not in patients with normal renal function. This finding was further confirmed in our adjusted survival analysis, which revealed that low LVEF (<35%) and renal impairment were significant predictors for cumulative survival. Expectedly, we found an interaction between high and low LVEF and renal function, explaining the changing effect of renal function across different levels of LVEF. The prohibitively low cumulative survival seen in re-AVR patients with low LVEF and concomitant renal insufficiency underscores the importance of identifying significant interactions in the patients’ underlying comorbidities and provides a parsimonious approach to recognize these high-risk patients, who are likely to benefit from transcatheter AVR (TAVR).

A 68-year-old (mean age in our study) 174 cm, 70 kg, re-AVR male patient with low LVEF (35%), creatinine of 2.1 mg/dL (renal impairment) and no other comorbidity would have a 2.55% STS-PROM. This is below the intermediate risk threshold (3.0%), for which TAVR is currently indicated, despite the high mortality and low survival observed in LEF patients with concomitant renal insufficiency.

Our study confirms the results from previous publications on isolated re-AVR in which early mortality and decreased long-term survival have been associated with low LVEF and NYHA III/IV (8-12). The steep operative mortality in the LEF group (13.5%) was considerably higher compared to the published mortality of non-reoperative (first time) cardiac surgery patients with low LVEF (5.6% to 11%) (13-15) and to the previously published operative mortality in all re-AVR patients (4.5% to 5.1%) (8,9), to which the 3.2% mortality of our re-AVR HEF group compares favorably. The contrasting outcomes of re-AVR LEF patients to both HEF and historic groups stress the increased risk conferred by the presence of low ventricular contractility and a prior sternotomy.

We assess the interrelation between LVEF, renal impairment, and long-term survival using a sparse Cox proportional hazards model. Both low LVEF and renal impairment were significant predictors of cumulative survival. More importantly, we confirmed the presence of a significant interaction between these two variables. Calculating for different clinical scenarios, and compared to HEF patients without renal impairment, HEF patients with renal impairment would have 4.28 times the risk of death (calculated HR =4.28). Correspondingly, for a patient in the LEF group with concomitant renal impairment that risk increases 166.49 times (calculated HR =166.49). The detrimental influence of decreased LVEF and impaired renal function on survival has been previously described (6,16,17). However, in re-AVR patients, the aggregated mortality risk of these comorbidities probably supersedes the predicted risk associated with each independent risk factor.

LVEF is a surrogate marker of cardiac decompensation and deteriorating hemodynamic reserve. Interestingly, the long-term influence of this low LVEF was negligent in patients with normal renal function, and augmented in those with concomitant renal insufficiency. However, the concomitant presence of these three characteristics (reoperative status, low LVEF and renal insufficiency) should serve as a parsimonious warning to the poor outcomes observed in these patients.

Although TAVR has become a popularized intervention for high-risk patients, it lacks the necessary long-term follow-up data (18-21). Greason and colleagues published the outcomes of a high-risk subgroup of reoperative patients from the PARTNER trial (cohort-A), which did not show a significant mortality difference or a conclusive survival benefit with TAVR over surgical AVR (20). More recently, Lauten and associates studied the outcomes of TAVR in patients with low ejection fraction through a sample of low-flow, low-gradient aortic stenosis from the multicenter German TAVI registry (22). Low grade patients suffered higher operative mortality (12.8%) compared to high grade patients (7.4%), although, low grade survivors experienced significant symptomatic improvements at 30 days and 1-year follow-up. These results call for continuous identification of reoperative and low LVEF cases which, based on their underlying comorbidities, would benefit the most from TAVR. Especially in patients with prohibitive reoperative risk, TAVR could offer more than eliminating the risk surgical chest reentry.

This study has all the inherent limitations of a retrospective design. The small size of the LEF group precluded further subgroup analysis or a continuous evaluation of LVEF. We decided to adopt LVEF ≤35% as a definition for low LVEF to be aligned with previous publications (23,24). Data on the inotropic reserve of low LVEF patients would help elucidate its role in the observed outcomes and its association with other baseline comorbidities. Unfortunately, Dobutamine stress results were seldom available in our study. However, the underlying inotropic reserve does not predict ventricular recovery in patients who survive the AVR (25), and could be less important in the assessment of long-term outcomes.

Despite recent publications with excellent outcomes of re-AVR in the elderly (10,26), age is still incorporated in the major cardiac surgery risk scores as a significant predictor of postoperative adverse outcomes (3,27,28). The exclusion of patients older than 80 aimed to decreased the variability introduced by unmeasured frailty in the elderly. However, it limits the generalizability of our findings to populations with a similar age distribution. The results of this study should be interpreted with these considerations in mind.

Patients presenting for an isolated re-AVR are a complex and growing population. In our study, re-AVR patients with LVEF <35% experienced higher mortality and longer ventilation, ICU, and hospitalization time, compared to those with higher ejection fraction. Long-term outcomes were heavily influenced by the concomitant presence of renal impairment and low LVEF. Patients undergoing re-AVR who have low LVEF and renal insufficiency represent a prohibitively high-risk population who might benefit from transcatheter therapies.