Secondary tracheal tumors are defined as tumors in, but not of the trachea and comprise a wide spectrum of tumor histologies and stages. There are no population-based data for these tumors, and in clinical practice these lesions are probably more common than primary neoplasms. A thoracic surgeon probably encounters tracheal obstruction by metastatic lymph nodes more often than invasion by adjacent primary tumors. Since natural history and prognosis are related to the tumor of origin, their management and prognosis may differ considerably from primary tracheal neoplasms; a correct diagnosis with attribution to the original tumor is therefore important. Tracheal invasion by metastasis may further be categorized as metachronous when the diagnosis is made after a disease-free interval, in contrast to synchronous diagnosis when primary malignancy coincides with tracheal invasion.

Secondary tracheal tumors may arise from hematogenous or lymphatic sites of metastasis, or by direct extension from adjacent structures including thyroid or esophagus. A useful and detailed classification of tracheobronchial metastases was proposed by Kiryu and associates based on the relationship of the primary tumor to the trachea (1). Type 1 tumors are direct metastases to the bronchus; type 2, invasion by an adjacent parenchymal lesion; type 3, invasion by lymph nodes; and type 4, peripheral lesion extending proximally along the airway wall. Most of the studies that we reviewed below reported type 1 tumors from extrapulmonary sites or type 2 tumors from the thyroid. We suspect, however, that invasion by adjacent lymph nodes metastatic from lung, esophageal, head and neck or other cancer is the most frequent form of metastasis; this type would be less represented in reports because the trachea is not the sole focus of attention in progressive disease and the survival of patients after diagnosis is short.

The true incidence of secondary tracheal tumors is unknown. One of the earliest cases of endotracheal metastasis was reported in 1954 in a case of colon cancer metastatic to the trachea (2). Existing epidemiological studies mainly focus on endobronchial metastases and contain different exclusion criteria. In an autopsy study of 1,000 consecutive cases of malignant neoplasms of epithelial origin from 1943 to 1947, six endotracheal metastases originated from primary sites of lung (3), larynx (1) and breast (1); however, this study excluded cases of direct extension to adjacent organs (4). Another study analyzing 1,359 consecutive autopsies from 1968 to 1971 found a 2% incidence of endobronchial metastases and 0.8% of endotracheal metastasis from primary thyroid cancer (1) and melanoma (1); cases of lymphoma, central nervous system tumors and primary lung neoplasms were excluded (3). A literature review from 1966 to 2002 found 204 confirmed cases of endobronchial metastases from extrapulmonary solid tumors, while 4% were located in the trachea (5).

Studies eligible for this systematic review included patients with metastatic disease to the trachea or primary tumors secondarily involving the trachea. We included individual case reports, single institutional case series and multi-institutional case series while excluding reviews, editorials, expert opinions and studies that lacked abstracts. Several reports collected primary and secondary tracheal tumors, or tracheal and bronchial tumors; the data regarding secondary tracheal tumors were specifically extracted and included in this study. For repeated publications reporting similar patients from the same institution, the most recent data set was included [e.g., (6-8)].

One reviewer (ML Madariaga) reviewed each included study and extracted data from text, tables and figures. Another author reviewed the extracted data (HA Gaissert). All data were entered into a standardized database.

Results will be presented as means and ranges where applicable. Kaplan-Meier survival analysis was performed for treatment groups of ≥10 patients derived from individual studies.

All were retrospective, observational series, and there were no randomized controlled or prospective trials. Thirty retrospective case series included bronchial as well as tracheal lesions, or primary in addition to secondary tracheal tumors, but only provided outcome measures based on the general study population (Table S1). Where possible, data relevant to secondary tracheal tumors were specifically extracted. However, to facilitate interpretation of the general outcome measures in case series, the number of patients with tracheal tumors was compared with the total number of patients in the study (Tables S2,S3). Data unavailable for extraction were left blank in the accompanying tables. 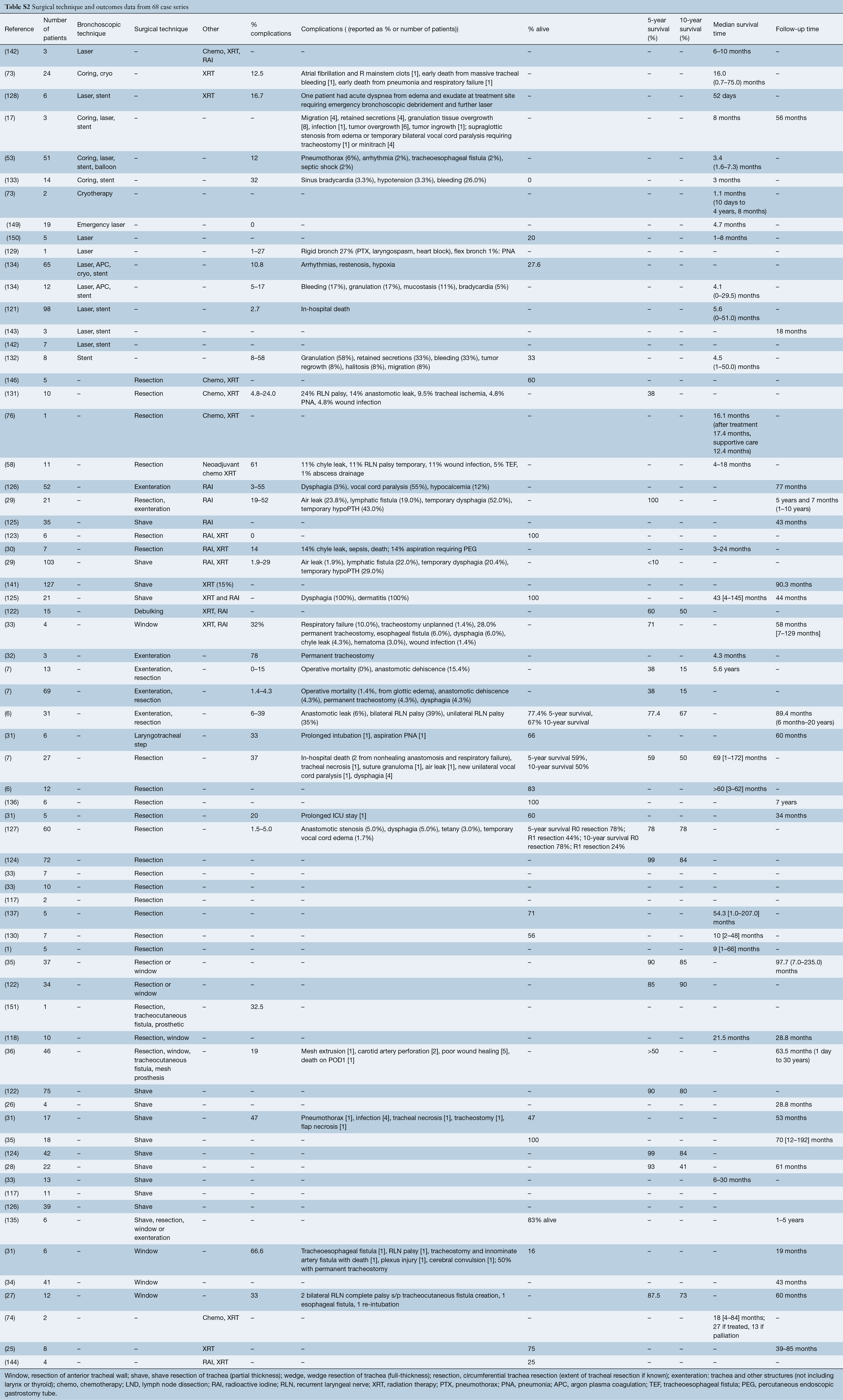 Among 2,242 patients, mean age of patients was 58.5 years and 58.4% were female. The most common histologic types were well-differentiated thyroid cancer (74%), unspecified esophageal cancer (5.93%), and squamous cell carcinoma of the lung (2.77%) (Table 1). In 9.5% of patients, the tumor was not otherwise specified or there was a mix of tumor histology not defined for each patient (Table 1). 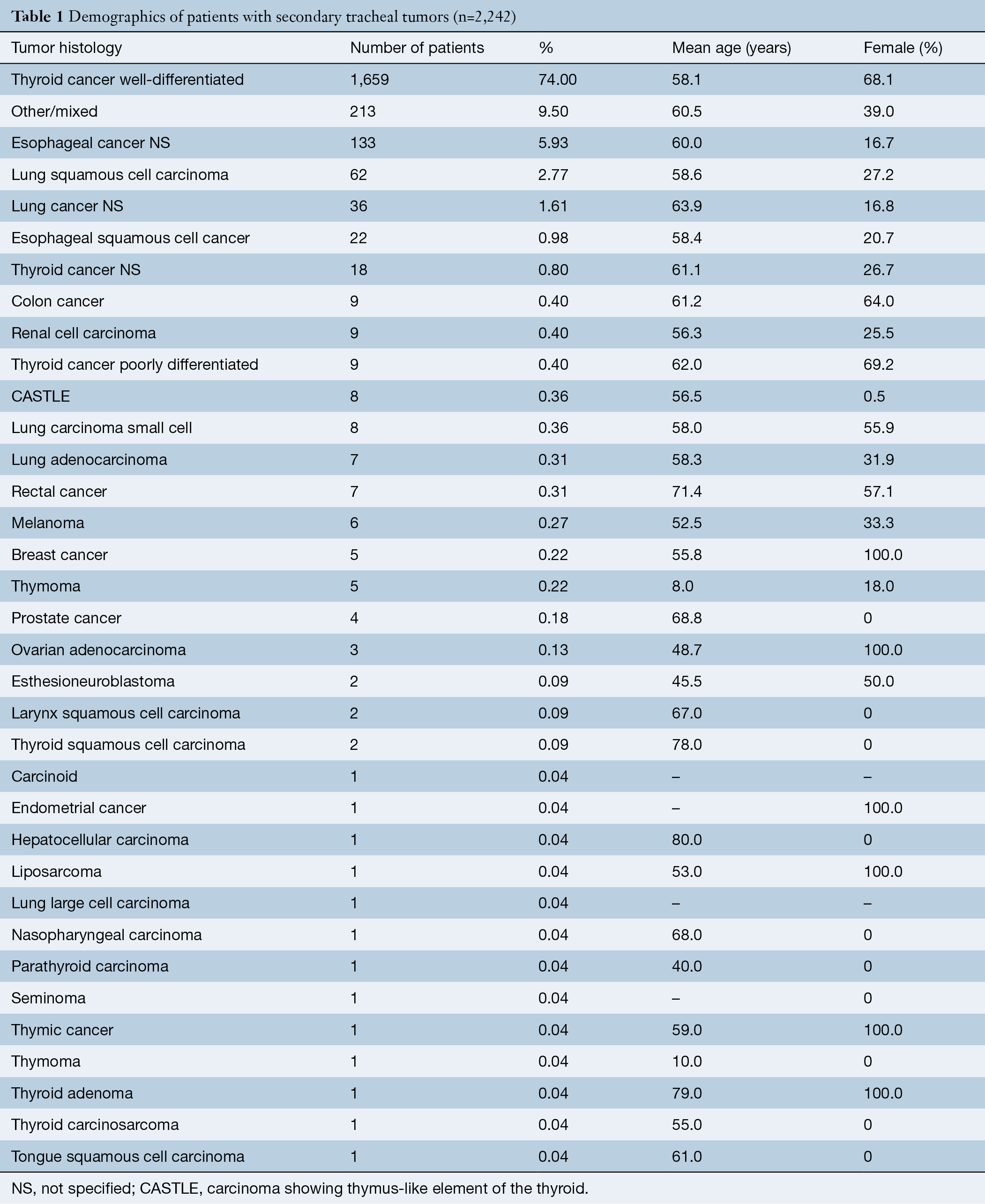 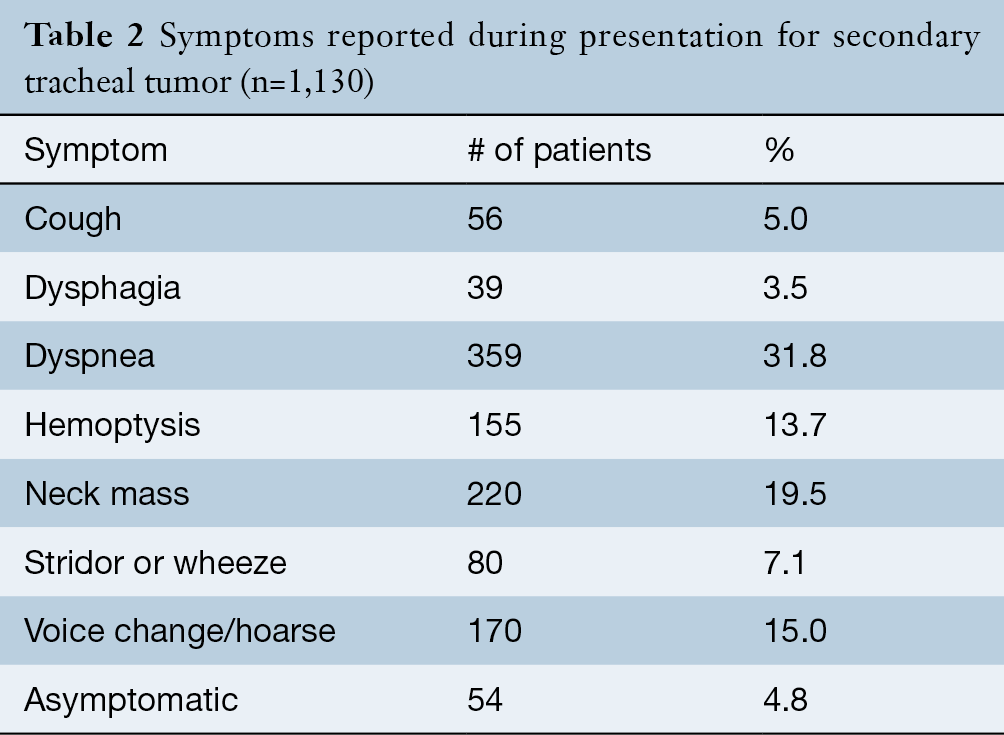 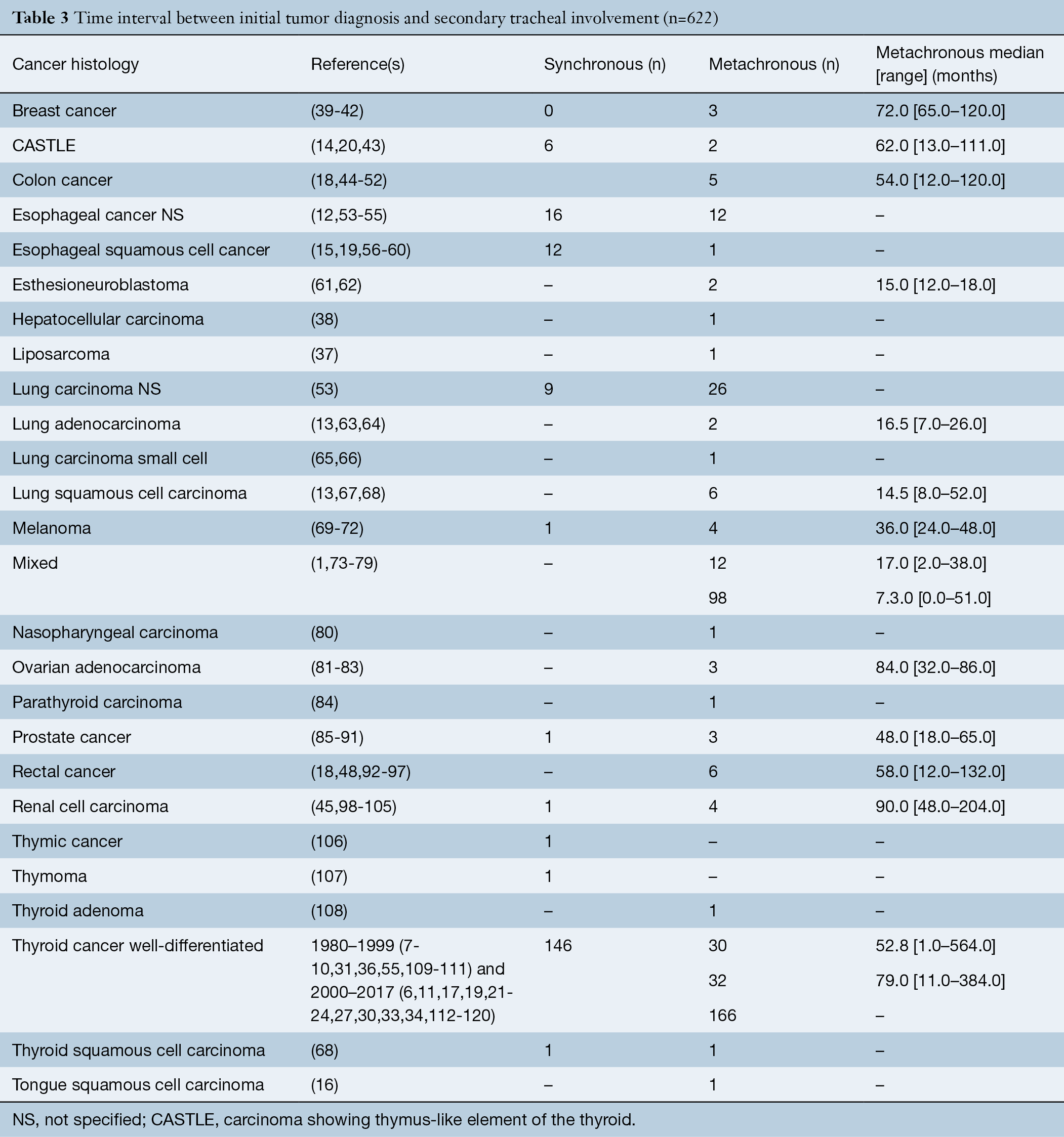 Data regarding complications after treatment were available in 54.4% of patients from case series and are detailed in Table 4 and Tables S2,S3. The rate of complications ranged from 12.5% to 16.7% for bronchoscopic management with chemotherapy/radiation, 0.0% to 58.0% for bronchoscopy alone, 0.0% to 78.0% for resection alone and 0.0% to 61.0% for surgery with chemotherapy/radiation. 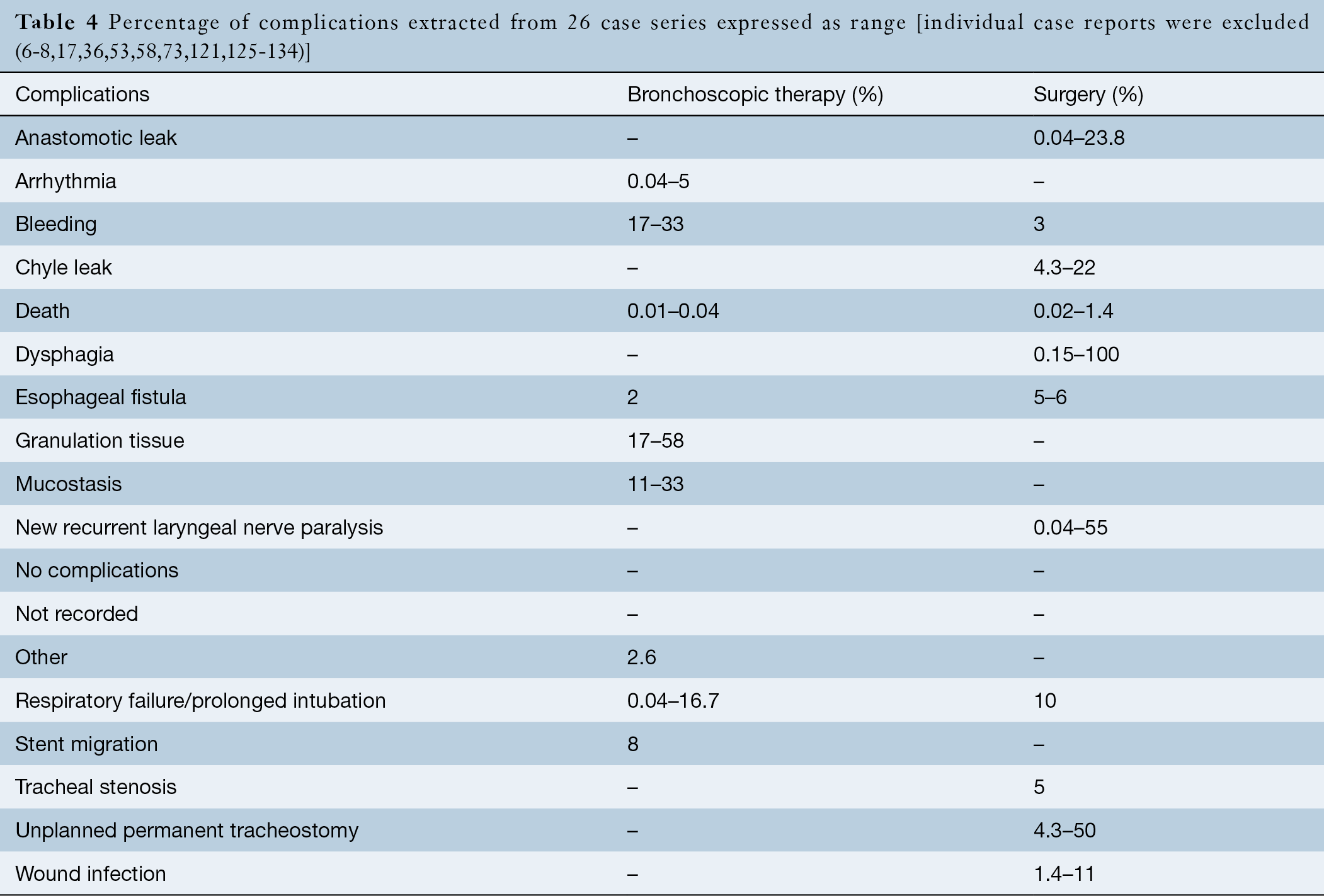 The most common complications after bronchoscopic intervention was bleeding (range, 17–33%), formation of granulation tissue after stent insertion (range, 17–58%), retained sputum (range, 11–33%) and stent migration (8%) (Table 4). Death during hospitalization occurred in 0.01% to 0.04%.

Data on complications were available for 70% of individual case reports (121 of 174 patients). There were no complications in 70% of all cases with available data. The most frequent complications were anastomotic leak in 9.0%, tracheal stenosis in 3.3% and unplanned permanent tracheostomy in 3.3%. Additional complications included respiratory failure or prolonged intubation in 2.5%, new recurrent laryngeal nerve permanent paralysis in 2.5%, esophageal leak or fistula in 2.4%, dysphagia in 2.5% and hospital death in 2.5%.

Data on recurrence were extracted from 13 case series identified for collective analysis (7,17,27,29,33,35,73,124,126,135-138) and nine individual case reports (14,15,17,44,56,61,81,98,139) and are listed in Table S4. The disease-free interval ranged from 1 to 58 months. Among patients with thyroid cancer who underwent bronchoscopic intervention, the incidence of recurrence ranged from 17% to 82%. Recurrence after segmental tracheal resection for thyroid cancer ranged from 0% to 34% and after tracheal shave resection from 4.7% to 54%. One study comparing shave and segmental tracheal resection for thyroid cancer found the local recurrence higher after shave resection [54% versus 0%, (29)]. Data on recurrence in patients with other cancer histology were too few to draw meaningful conclusions. 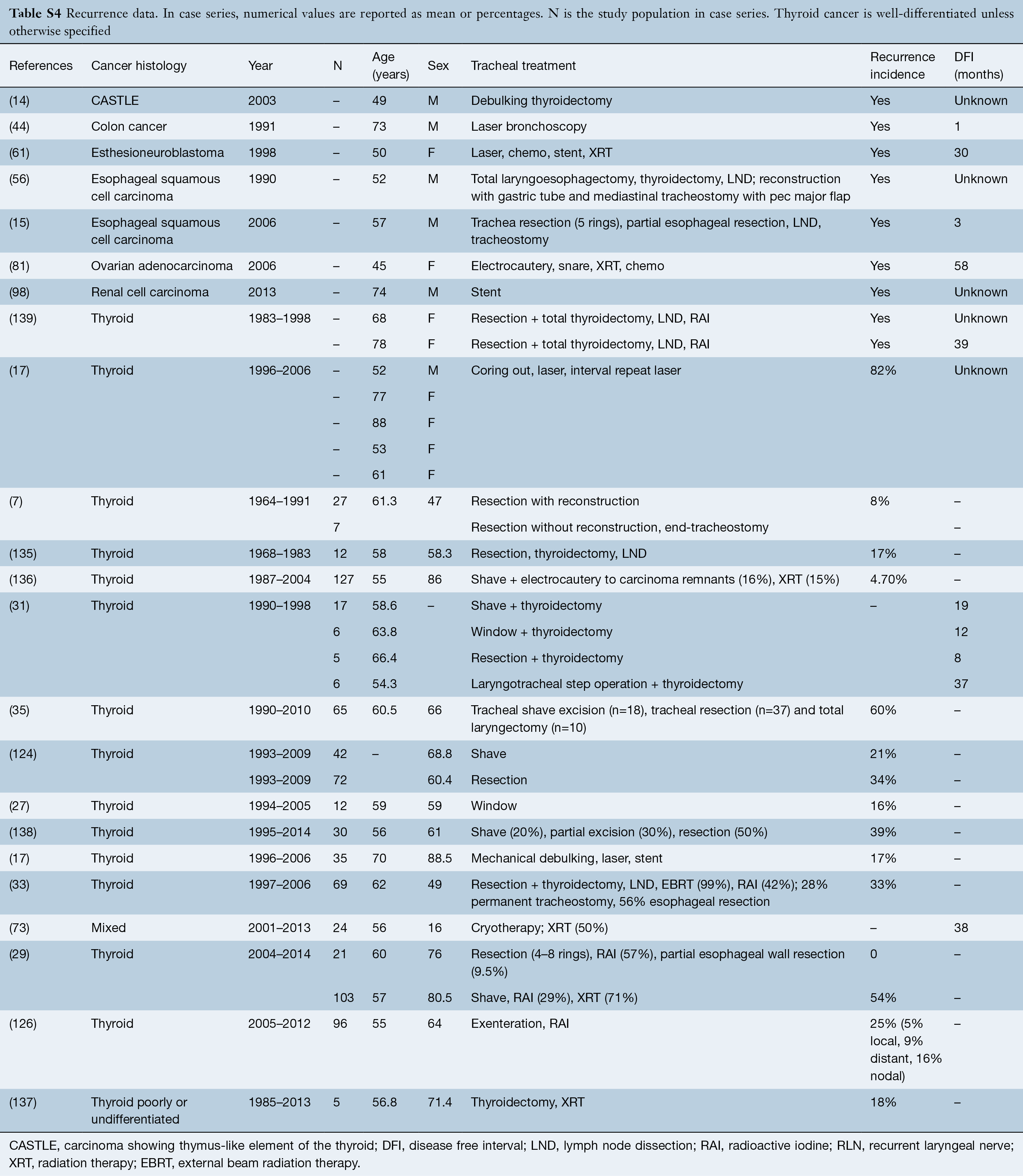 Few individual centers amass a meaningful clinical experience in the management of tracheal tumors, and far fewer yet in secondary tracheal malignancy. The extraction of information from data useful to the clinical surgeon is therefore difficult and requires critical reading between the lines. Case reports often emphasize perceived successes, while palliative intervention in patients with advanced, progressive malignant disease is probably underreported. There are, however, several principal findings and conclusions we consider central to the understanding of secondary tracheal malignancy.

The major limitation of this study is its reliance on case studies or case series that have incomplete or heterogeneous information. Most studies examined patients with endobronchial metastases, where cases of endotracheal metastases are few; other studies presented outcomes based on mixed tumor histology of secondary tracheal tumors. We mitigated this bias by extracting outcomes values pertinent to secondary tracheal tumors where possible. Comparison of survival outcomes after different treatment modalities is rare because tumor histology and stage are not controlled. A more homogeneous data set would allow us to assess the relative utility of therapeutic interventions and their specific impact on morbidity and mortality. The interpretation of complications is challenging in a collective review as patient selection and operative standards vary widely among institutions. Complications were reported in half of all case reports and may have inspired publication. Similar limitations were noted by a review of laryngotracheal invasion by thyroid carcinoma from 1971 to 1990 that included 595 patients from 20 studies with airway invasion (140) and a review of endobronchial metastases from extrapulmonary solid tumors from 1962 to 2002 (5).

In conclusion, this comprehensive systematic review of secondary tracheal tumors highlights common presentations, modes of treatment and general outcomes. Patients with secondary tracheal tumors should be assessed for overall prognosis and impediments to quality of life. An individualized treatment approach involving surgical, bronchoscopic and medical therapies can then be utilized to optimize clinical outcomes.