A large area of the myocardium is at risk when the proximal segment of the left anterior descending (LAD) artery has a high-grade stenosis (1). Traditionally, isolated proximal LAD stenosis not amenable to percutaneous coronary intervention has been treated with conventional on- or off-pump coronary artery bypass grafting (CABG) through median sternotomy. For the past five decades, on-pump CABG has enabled cardiac surgeons all over the world to achieve excellent results, despite the ever-increasing risk profile of the patients. However, the majority of complications occurring after on-pump CABG can be attributed to cardiopulmonary bypass and myocardial protection. This is especially true for high-risk patients currently undergoing CABG (2). Off-pump CABG through full sternotomy for single-vessel LAD disease eliminates the risks associated with on-pump CABG on cardiopulmonary bypass, yet issues associated with full median sternotomy remain a cause for concern.

Minimally invasive direct coronary artery bypass (MIDCAB) grafting involving the surgical revascularization of the LAD artery through a left anterior thoracotomy has been advocated as an acceptable alternative to standard CABG through full sternotomy (3). The minimally invasive nature of the procedure, avoidance of cardiopulmonary bypass, and use of the left internal mammary artery (LIMA) with its well-established long-term patency are some of the widely recognized advantages (4,5). Despite these advantages, certain disadvantages including the technically demanding nature of the procedure, a steep learning curve, and lack of long-term published outcomes have precluded its universal adoption. We undertook this study to compare the short-term outcomes and long-term survival of MIDCAB and conventional CABG through full sternotomy for grafting of isolated LAD.

The study was conducted in accordance with the principles of the Declaration of Helsinki. The local audit committee approved the study, and the requirement for individual patient consent was waived. We retrospectively analyzed prospectively collected data from the institutional cardiac surgery database (Patients Analysis & Tracking System; Dendrite Clinical Systems, Ltd., Oxford, England, UK) at Harefield Hospital for the period February 1996 to October 2017. This data is annually submitted to the National Institute for Cardiovascular Outcomes Research National Adult Cardiac Surgery Audit registry. Reproducible cleaning algorithms were applied to the database, which are regularly updated as required. Briefly, duplicate records and nonadult cardiac surgery entries were removed, transcriptional discrepancies were harmonized, and clinical conflicts and extreme values were corrected or removed. The data are regularly validated. Further details and definition of variables are available at http://www.ucl.ac.uk/nicor/audits/adultcardiac/datasets. We selected subjects with isolated LAD grafting. MIDCAB was most commonly performed for single-vessel isolated LAD disease when percutaneous coronary intervention was not advisable (ostial involvement or complex lesions), not successful, or not possible (occluded LAD). It also included patients who had undergone stenting of the LAD previously and presented with recurrence of symptoms due to development of in-stent stenosis. Similarly, patients with double vessel disease who had already undergone primary angioplasty and stenting of a non-LAD culprit vessel underwent LAD revascularization by MIDCAB. Finally, patients selected for elective hybrid revascularization underwent MIDCAB followed by stenting of non-LAD lesions. The patients in the full sternotomy group were offered revascularization of the isolated LAD only as the preferred option due to referral of the patients to a surgeon who was not trained to perform MIDCAB. The techniques of MIDCAB and LIMA-to-LAD anastomosis through full sternotomy have been previously described (6).

For baseline characteristics, categorical variables are expressed as number and percent of patients. Continuous variables are reported as mean ± standard deviation (SD) or median and interquartile range (IQR) according to their distribution. Values between groups were compared by unpaired Student t-test after testing for normal distribution; otherwise, nonparametric Mann-Whitney U tests were used. Fisher exact or chi-square tests were used for categorical variables with nominal scales. Multiple imputation using bootstrapping-based expectation-maximization algorithm and including all pretreatment variables (Amelia R package, http://www.jstatsoft.org/v45/i07/) was used to address missing data. For long-term survival, the Kaplan-Meier method was applied, and differences were assessed by the log-rank test. Kaplan-Meier survival was compared and a curve generated using the survival package (http://CRAN.R-project.org/package=survival) and survplot package (http://CRAN.R-project.org/package=survplot). A probability value of P<0.05 was considered statistically significant.

From February 1996 to October 2017, 508 patients underwent off-pump LIMA-to-LAD anastomosis through a left anterior thoracotomy at our institution. These procedures were performed exclusively by three surgeons who were formally trained to perform MIDCAB. During the same period, 160 patients had a LIMA-to-LAD anastomosis via full sternotomy performed by five other surgeons who were not trained to perform MIDCAB. The two groups were similar with respect to preoperative demographics and risk profile. Preoperative data of these patients are shown in Table 1. Only 0.3% data was missing. 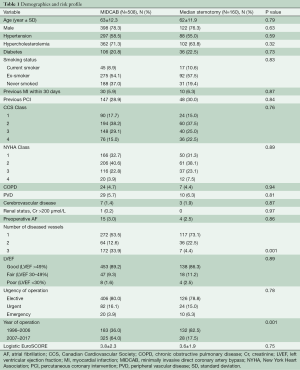 There were 10 deaths in the MIDCAB group and four deaths in the full sternotomy group (P=0.81). None of these deaths were due to occlusion or stenosis of the LIMA-to-LAD stenosis. Four (0.8%) patients with recurrent angina within 30 days of the index operation in the MIDCAB group and two (1.3%) in the full sternotomy group underwent symptom-driven angiography that showed significant anastomotic stenosis of more than 50%. The graft occlusion or graft stenosis were treated successfully with percutaneous coronary intervention in all these patients. The two groups did not significantly differ with regard to other complications. All postoperative complications are listed in Table 3.

This retrospective single centre study compares the perioperative and postoperative outcomes and long-term survival of revascularization of isolated LAD with the MIDCAB and full sternotomy approaches over a 20 years period. The results of our study confirm that MIDCAB is a safe and effective revascularization strategy for patients with isolated proximal LAD disease. In our institution, MIDCAB is performed by highly experienced surgeons with high-volume MIDCAB practice, and outcomes are reflective of this experience. However, there was no significant survival advantage or superiority of MIDCAB in terms of postoperative complications when compared to revascularization of isolated LAD through full sternotomy.

The short-term results of this study are in line with the published results of other groups reporting early mortality (0% to 4.9%), conversion rate to sternotomy (0% to 6.2%), short-term reintervention on target vessel (up to 8.9%), and overall perioperative complication rate (1.6% to 40%) (9-14). The study is unique as it compares long-term survival of MIDCAB and full sternotomy revascularization of isolated LAD at a mean follow-up of 12.95±0.45 years, the longest reported follow-up to date. The excellent outcomes in our study are a reflection of the experience of the surgeons performing MIDCAB. Although the overall operative time for MIDCAB is significantly more than that for full sternotomy procedure, the operative time over the past 10 years for MIDCAB has decreased significantly compared to the operative time prior to 2007 (231±14 versus 132±42 min; P=0.0001). This reduction in operative time is suggestive of the fact that the surgeons performing MIDCAB have traversed their learning curves. Moreover, in our institution, patients needing isolated LAD grafting are preferentially referred to surgeons performing MIDCAB. This approach has translated into improved outcomes, thereby validating the positive volume-outcome relationship (15).

The popularity of the LIMA as a conduit for revascularization of the heart has increased steadily over the past three decades. With more data available concerning the long-term patency of this conduit, virtually every patient is afforded the advantage of this surgical procedure (16). The published experience of LIMA usage clearly shows that patients who receive in-situ LIMA graft to the LAD have improved long-term survival, have fewer recurrent symptoms, and have fewer late cardiac-related events (17,18). These benefits can be attributed to the improved long-term patency of the LIMA (16-18). Performance of the LIMA-to-LAD anastomosis through a small left anterior thoracotomy in MIDCAB offers the advantage of improved long-term survival with minimum morbidity. Five-year survival ranges between 80% and 95% in different publications including high risk and elderly patients (19-21). The 5-year survival of our patients after MIDCAB of 93.6%, the 10-year survival of 76.2% and 15-year survival of 67.5% is comparable with other studies (13,14,19-21).

The main limitation of our study is that no follow-up data were available to compare the groups with respect to the cause of death (cardiac versus non-cardiac), recurrence of angina, need for repeated revascularization, and graft patency. Therefore, we can only speculate about the mechanism beyond the equipoise between MIDCAB and isolated LAD grafting through full sternotomy on long-term survival. Other limitations of this study include its retrospective nature and inherent potential for errors in data collection. Last but not least, we did not specifically look for the impact of cumulative years of experience or other factors such as learning curve or fellowship training of the surgeons performing MIDCAB on outcomes.

MIDCAB is a very attractive operation for the patient due to its minimally invasive nature, excellent cosmesis and a speedy recovery. Although, it is a challenging operation for surgeons, especially those in the learning curve phase, it can be performed very elegantly and effectively by highly experienced surgeons, with not only good short and mid-term results but also excellent long-term outcomes. Our large single centre study with longest follow-up validates the status of MIDCAB as an effective strategy for grafting of the LAD. However, it fails to show superiority of the minimally invasive approach compared to conventional CABG through full sternotomy.