In terms of grafts used in addition to the left internal thoracic artery (LITA), the majority of evidence focuses on use of the right ITA (RITA) or radial artery (RA). In the West the RA is largely used as a second or third arterial graft while the use of the gastroepiploic artery (GEA) remains common by some surgeons in the Far East.

While there is a very substantial observational literature supporting the use of bilateral ITA (BITA) grafts (1-4), there has only been one large randomized controlled trial (RCT) (5) that has attempted to answer this. The long-awaited 10 years results of the Arterial Revascularisation Trial (ART) were presented on behalf of the ART Investigators at the ESC in Munich 2018 (6). At the time of the conception of ART in 2002 the prevailing wisdom was that it was only the use of bilateral ITA (BITA) grafts that might potentially offer an additional survival benefit to a single LITA graft. At 10 years, in the randomized intention-to-treat analysis in ART there was no difference in mortality between BITA and LITA groups, nor in the composite endpoints of mortality, myocardial infarction (MI) or stroke. In contrast, in the as-treated analysis (non-randomized), performed because 40% of patients effectively received a different treatment strategy from that originally intended [14% of BITA received a single LITA, 4% of single ITA (SITA) received BITA and 22% of SITA received an RA], there was a significant survival benefit (and a significant reduction in the composite endpoint) in favour of more than one arterial graft. In the ESC presentation, data was provided to show that surgeon experience was critical to successfully perform BITA grafting and that high performers had superior surgical outcomes at 10 years.

Recently, the long-debated question of whether the use of a RA is superior to saphenous vein grafts (SVG) has been answered conclusively by the RADIAL Investigators in a meta-analysis of six randomized trials with 5-year follow-up (7). Briefly, a lower angiographic failure rate of the RA vs. SVG (8% vs. 20%) accompanied by a significant reduction in the composite end-point of death, MI and repeat revascularization definitively settles the question. Furthermore, with continuing attrition of vein grafts over 10 years it could be speculated that the differences in patency and clinical outcome may continue to diverge even further in favour of the RA.

In deploying arterial grafts to give the best long-term chance of success in combination with their “ease of use” there are six major considerations:

This is dictated by two considerations. First it depends whether the operation is performed on or off-pump. In the former situation the sequence of distal graft anastomoses is less relevant and usually LITA to left anterior descending (LAD) is the last distal anastomoses. For off-pump CABG, however, the over-riding principle is that any occluded coronary artery must be revascularized first.

Second it depends whether a composite arterial graft is to be performed. If so, it is our usual practice to construct a RITA to the medial side of LITA as a “T” anastomoses on a swab placed over the ascending aorta at the level of the second intercostal space where there is relatively little movement.

When performing the procedure off-pump our practice is to:

The following attempts to describe potential advantages and disadvantages of various techniques for deploying arterial grafts in differing anatomical situations and useful ‘tips and “tricks”.

Figure 1: Skeletonized harvest of the ITA 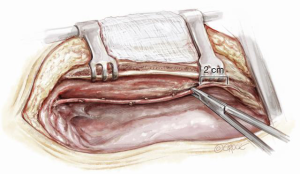 Skeletonization of the ITA results in a conduit that is both longer and wider that makes composite and sequential grafting easier and also significantly reduces the incidence of sternal wound complications when BITA grafts are used (12). To harvest the LITA by the skeletonisation technique, the intra-thoracic fascia medial to the LITA is incised as a “tram line” with diathermy or scissors. The ITA vein lies medial to the ITA and is used as an anatomic guide to safe harvest of the ITA. We use small clips on each ITA branch proximally and distally and then divide each branch with fine scissors. Some surgeons favour the use of a harmonic scalpel to harvest the ITA and avoid the need for multiple clips (13).

The ITA harvest stops 2 centimetres proximal to the bifurcation, both to avoid the risk of devascularisation of the xiphisternum and because this portion of the artery is known to be more vasospastic than the more proximal LITA (14). During harvest there is no need to heparinize even after dividing the ITA from the chest wall and occluding it distally with a clip. To encourage ITA vasodilatation, systolic blood pressure is increased to 150 mmHg for 5 minutes without the need for topical vasodilators. In a small number of patients where the ITA diameter appears very small (usually small elderly females) it may be necessary to carefully inject a small amount of papaverine diluted in blood intraluminally. This must be done with a very fine catheter to avoid iatrogenic injury to the artery.

Figure 2: In situ RITA to LAD and LITA to circumflex system 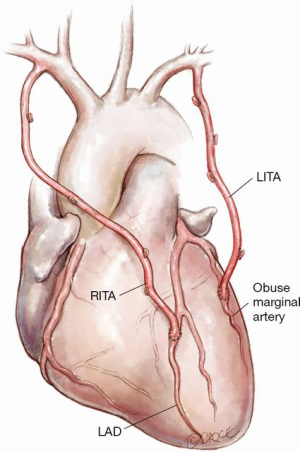 The advantage of this technique is its technical simplicity for both on and off-pump CABG. It is particularly useful in the setting of distal left main coronary artery disease, with or without additional proximal left sided disease, and facilitates a no touch aortic technique to minimize the risk of stroke, particularly in elderly patients.

Figure 3: LITA to an obtuse marginal with a composite RITA as a free graft to the LAD 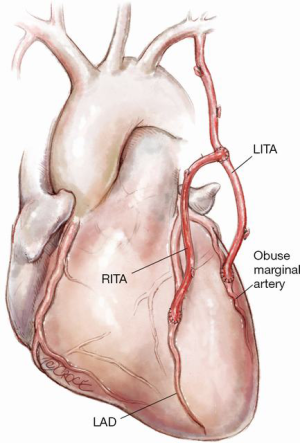 The major advantage is its technical simplicity especially when performed off-pump. It is technically less challenging than bringing the RITA from the lateral wall of the LITA to the obtuse marginal system. Furthermore, it only requires harvest of the proximal two thirds of the RITA. 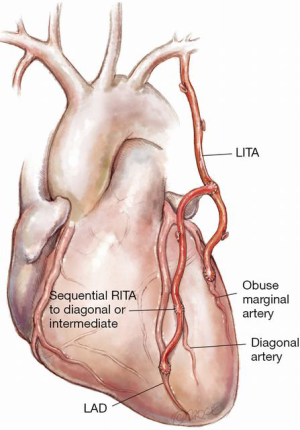 Composite sequential arterial grafts on the left side with the RITA anastomosed as a “T” graft from the medial side of the LITA and then used sequentially to pick up an intermediate and/or a diagonal coronary artery as a side-to-side anastomosis before end-to-side anastomosis to the LAD. The author feels that this is less technically demanding than using the RITA as a composite graft from the lateral wall of the LITA to perform sequential composite grafts on the lateral wall of the heart. In off-pump surgery, if a LITA graft to the obtuse marginal coronary artery (OM) is performed first then the heart can be then placed back in the pericardial cavity and the lie of the RITA coming from the medial side of the LITA back towards the midline, picking up an intermediate and/or diagonal coronary artery as a side-to-side anastomosis, is technically more straightforward and results in an excellent lie of the grafts. 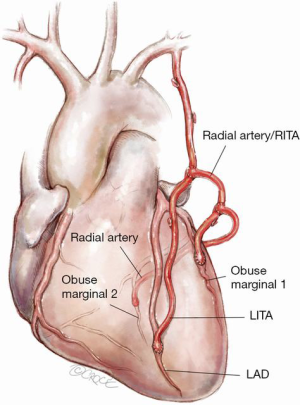 Figure 6: LITA to LAD, RITA through the transverse sinus to the obtuse marginal 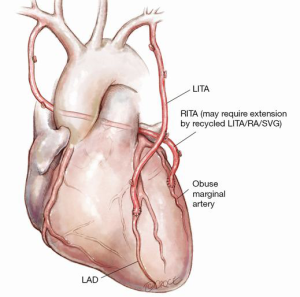 The advantage of this technique is to avoid any arterial graft crossing the mid line in case of eventual need for redo sternotomy. There are two disadvantages of this technique. First is the unusual scenario of bleeding from a side branch of the RITA behind the aorta. Second and more commonly the RITA can only reach early intermediate or obtuse marginal artery and may appear stretched when performed off pump. In such a scenario the RITA may require extension by recycled LITA/RA/SVG. 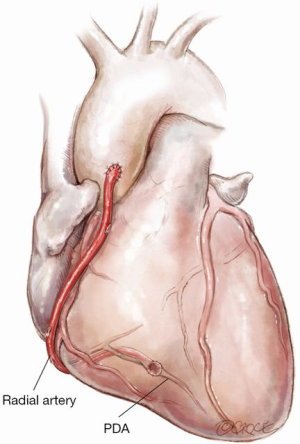 This is an excellent strategy where there is at least 80% stenosis in the right coronary artery (RCA) or preferably if the RCA is occluded when competitive flow is minimized. An alternative strategy, especially if a no touch aortic technique is indicated, is to anastomose the RA to the proximal in situ RITA with the main body of the RITA being used for a composite left sided graft.

Figure 8: In situ RITA with extension by RA 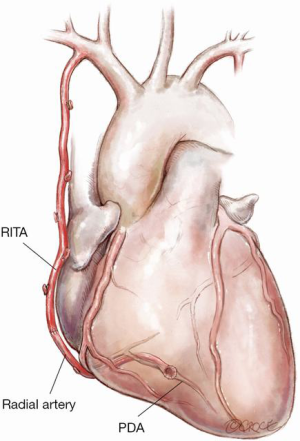 The RITA will commonly not reach the PDA even after full skeletonization and can be extended with recycled LITA/RA/SVG. The RITA should not be placed to the main RCA because of the potential for competitive flow due to size discrepancy and eventual development of progressive disease at the crux. As described for Figure 7, an alternative strategy is to anastomose the RA or SVG to the proximal in situ RITA, especially if a no touch aortic technique is indicated, with the main body of the RITA being used for a composite left sided graft.

Figure 9: Sequential SVG on the inferior wall of the heart 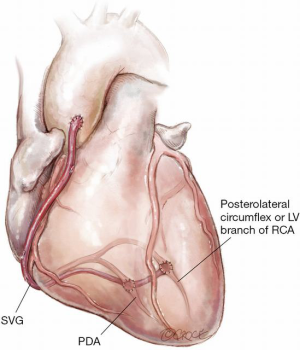 Figure 10: Use of a GEA for the inferior wall 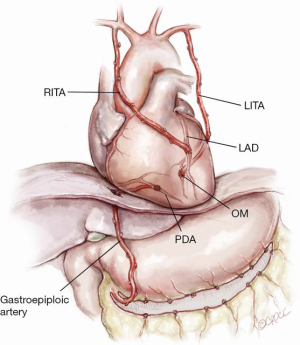 The use of a GEA to the PDA with an in situ RITA to the LAD and LITA to the obtuse marginal. GEA to the PDA is particularly useful in the unusual situation of an occluded dominant ungrafted/failed graft to the right coronary artery but with patent grafts to the left side. This can be performed off pump through a relatively limited incision through the lower sternum. 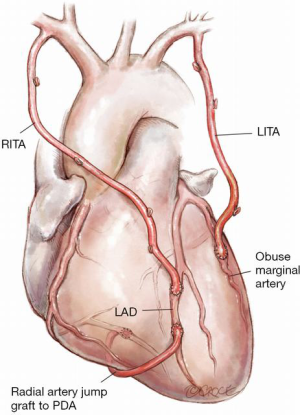 LITA to LAD with a jump graft from the distal LAD to the PDA. This is technically easy to do off pump- preserving the no touch aortic technique principal and proving useful in the situation when there is limited conduit.

Conflicts of Interest: Prof. DP Taggart has received research funding, speaking and travelling honoraria from Medistim (Oslo) and is the Principle Investigator for the REQUEST Registry (funded by Medistim).