Since the first implantation by Hill and colleagues (1), extracorporeal membrane oxygenation (ECMO) has become an established treatment option for adult patients with refractory cardiogenic shock (2), providing temporary cardiac and respiratory support. Approximately 1% of adult patients who undergo cardiac surgery develop post-cardiotomy cardiogenic shock (PCS) and require mechanical circulatory support (MCS) beyond the conventional medical or mechanical treatments to support the failing heart (1-5). Because of its quick availability, easy and rapid applicability and reliability, ECMO support has become a more and more attractive option, particularly in post-cardiotomy (PC) setting (1-3). Another option available is short-term ventricular assist devices (VADs), either uni- or biventricular, but complexity, lack of lung support, and costs has limited its wide application (6-8).

PC-ECMO has become the most frequent indication for ECMO in the United States (3), however, its exponential increase has not been paralleled by improved results, but rather to the contrary (5). Although during the last 20 years advances in technique and management were achieved, ECMO results have not been satisfactory. Prevalence, trends of use, indications and implant information, types of patient, specific procedures for whom it is being used, in-hospital patient management and short- and long-term outcomes have peculiar features in the PC-ECMO setting. Information on post-hospital discharge outcomes after veno-arterial (VA)-ECMO (ranging from 1 year to 10 years) have shown overall survival rates ranging from 17% to 40% (9-11), but little attention has been given to other factors related to the long-term prognosis (12-14). Furthermore, despite numerous publications that have shown ECMO-related short and medium-term results, specific reports about PC-ECMO have been limited and usually related to single-center experience. In addition, some reports have shown some critical illness in survivors, with some long-term functional impairment in physical, cognitive and psycho-social settings (15,16). A targeted analysis of these aspects would have a relevant implication in the daily practice of ECMO users. This review, therefore, had the aim to present the current information about PC-ECMO in adult patients, providing an evaluation of the long-term mortality and morbidity for VA-ECMO.

Only studies specifically conducting on ECMO in peri- or post-operative adults (>18 years of age) undergoing cardiac surgery (see Table 1) were collected, leading to a careful assessment of short-term outcomes and evaluation of post-discharge follow-up. Exclusion criteria included published PC-ECMO series, case reports, or case series, reporting less than 10 patients, as these would not allow for a meaningful cohort analysis of PC-ECMO patients. 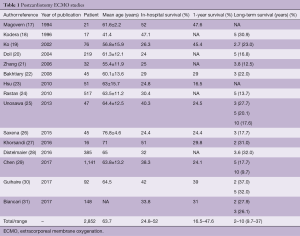 Overall, 242 published papers were selected, reviewed and carefully analyzed. The flow-chart showing the literature search and selection for final information analysis is shown in Figure 1. Table 1 shows the main results. Fifteen studies were selected, included 2,852 patients supported with VA-ECMO due to PCS. The mean age was 63.7 years. VA-ECMO was placed using central and peripheral cannulation. In-hospital survival ranged from 24.8% to 52%, whereas 1-year survival ranged from 16.5% to 47.6%. Regarding long-term survival, the best rate reported was 37% (Table 1). However, each study has considered different timing, therefore any consistent and comprehensive evaluation was not feasible. A total of six articles, enrolling 2,033 patients, reported 5-year survival, while only two studies (1,188 subjects) provided data for 10-year survival. Corresponding reported survival ranged from 13.7% to 32% and from 9.7% to 17.6%, respectively. The created variable regarding the survival difference, representing the difference between one-year and in-hospital survival, ranged from 0% to 21%, thereby confirming that long-term mortality was relatively low in these patients, although these findings were hampered by the maximum follow-up at 10 years from the original operation. 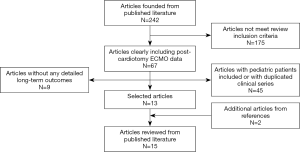 Table 2 shows the described major outcomes found in this literature selection. These mainly consisted of five fields reported: New York Heart Association Class, re-hospitalizations, medical expenditures, quality of life and specific outcomes regarding dead and survived patients. From the limited data and information available, it is evident that overall PC-ECMO patients have a favorable prognosis, with the vast majority maintaining a satisfactory clinical condition, limited readmission rate and favorable quality of life.

The incidence of refractory PCS in adult cardiac surgical patients ranges from 0.5% to 1.5% (24,31,32). PCS is a rare but dreadful complication. The first PCS treatment step is pharmacologic. However, the overwhelming majority of PCS is unresponsive to high dosages of inotropes. Therefore, intra-aortic balloon pump support is frequently adopted, even if this strategy presents well-known limitations, particularly during active resuscitation (33). As a direct consequence, VA-ECMO has been increasingly considered and applied in PCS. Such a temporary MCS is a salvage therapy, often representing the only prompt and life-saving technique in refractory PCS cases. Although VA-ECMO support is a well-established and effective procedure in the presence of PCS, the in-hospital mortality rate is still high, with an unsatisfactory in-hospital outcome. In fact, the reported in-hospital survival has ranged from 24.8% to 52% in several case series, a 1-year survival ranging from 16.5% to 47.6% and gradually ranging from almost 10% to 37% when the late survival is considered (20-30). These data clearly show how the majority of PC-ECMO patients die during the hospitalization, showing a fall in the mortality rate after being discharged. This would mean that achieving the discharge might be one of the most important predictors of good long-term outcome. Therefore, it is clear that high in-hospital mortality remains the Achilles’ heel of ECMO. The importance of survival to discharge—and not just successful weaning—was illustrated by Ko et al., who studied 76 patients undergoing ECMO support for refractory PCS. Although 60.5% of this cohort was successfully weaned from ECMO, only 26.3% survived to discharge. However, all survivors showed New York Heart Association (NYHA) I and II functional class at 32±22 months of follow-up (19).

However, the current literature doesn’t allow to make any substantial consideration regarding long-term outcomes. Lack of data and absence of standardized data collection made our analysis extremely undetailed and difficult to interpret. Under this light, the overall literature clearly shows a lot of cloudy aspects. von Bahr et al. reported a high risk of death, 15% within 90 days of hospital discharge increasing to 24% at long-term follow-up of 3 years (34). In contrast, de Waha et al. showed 15.7% survival with satisfactory functional outcomes at 18 months in patients with refractory cardiogenic shock undergoing ECLS (35). Therefore, another crucial point that should be detailed better is the quality of life of survivors.

The NYHA class is a remarkable scale for defining patient functional status (36). Six out of sixteen papers reported this parameter as part of long-term results in PC-ECMO patients. Doll et al. showed all survivors in NYHA class II at late follow-up (20). On the contrary, the experience presented by Saxena et al. (26). interestingly described a heterogenous functional status, which included patients in class III and IV. However, the overwhelming majority of these studies reported survivors in NYHA class I or II (20-30). This might lead to speculation that the PC-ECMO survivors, once overcoming the ECMO-related hospital course, may show a favorable long-term functional status. Guihaire et al. supported the latter finding by measuring the long-term quality of life (30). In this study, the health-related quality of life was assessed among PC-ECMO survivors 2 years after ECMO support using the EQ-5D survey (37) and the EQ visual analogue scale. No self-care limitations were found in any cases. Minor problems, however, were found considering other dimensions came out (e.g., mobility, usual activities, pain and anxiety) (37). Therefore, PC-ECMO survivors seem to achieve a long-term good functional status and quality of life. On the other hand, three papers included readmission rate in their analysis. The latter fluctuated from 37.8% to 60%. Under this light, Chen et al. (29) observed a greater mean number of readmissions for any cause during the follow-up in patients who required ECMO compared with those who didn’t need the ECMO support after surgery. As a consequence, patients supported with ECMO for PCS might have an increased need of future hospitalizations. Chen et al. also found greater medical expenditure in PC-ECMO group during only the first year, which disappeared in the following checks. This finding might be related with the increase number of readmissions in this population, underlying the high disease burden amongst these patients. Finally, scant data are available regarding the specific causes of death or the new onset of morbidities in survivors. Nevertheless, infections and cardiac events might be considered the most common causes of death or morbidity (20-30).

In conclusion, the long-term survival in PC-ECMO seems to be strongly influenced by the early hospitalized critical phase, after which the survival slightly drops but remains satisfactory. Little is known, however, regarding other long-term outcome parameters after ECMO treatment in PC setting. The current lack of dedicated registries, limited data collection within studies and post-discharge follow-up in PC-ECMO patients, and a few centers with this specific experience and high number of cases, are likely the most important causes for such poor information. Further investigations are urgently needed in order to better show post-discharge outcomes in adult patients submitted to PC-ECMO.

Conflicts of Interest: Prof. Lorusso declares that he is Principal Investigator of the PERSIST-AVR Study (sponsored by LivaNova) and is Consultant for Medtronic. The other authors have no conflicts of interest to declare.