The patient was a 47-year-old male with mild heart failure and an expanding 5.2-cm ascending aortic aneurysm. His sinuses also were involved, with a 6.3-cm aortic root diameter. He had Grade 4 aortic insufficiency (AI) (Figure 1) and his left ventricle and coronaries were normal. His aortic annulus was especially dilated at 30 mm. The right and non-coronary sinuses were primarily involved in the root aneurysm and his left sinus seemed normal. Echocardiography showed the dilated annulus, leaflet tethering from the sinotubular junction (STJ) dilatation and normal appearing leaflets. The AI was central and severe with stretching of the leaflets and loss of central coaptation. No leaflet prolapses or other defects were evident. 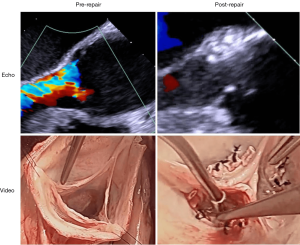 Figure 1 Echocardiographic and video images of the aortic valve, before and after the repair.

In this patient, we chose to (I) repair the aortic valve and (II) to selectively replace only the aneurysmal right and non-coronary sinuses. Midline sternotomy was employed and conventional cardiopulmonary bypass via the distal ascending aorta and the right atrium was utilized, with anterograde and retrograde Custodiol™ cardioplegia. Initially, we applied retrograde cardioplegia to arrest the heart followed by direct administration into both coronary ostia.

The aorta was opened high, to avoid possibly displaced coronary ostia, and a circular aortotomy was completed down to within 1 cm of the coronaries and commissural tops. The ascending aneurysm was excised and again, the right and non-coronary sinuses appeared aneurysmal, with a normal left sinus and nice leaflets. Traction sutures were placed horizontally above each commissural top, and the annulus sized to 30 mm (video: http://www.jsrmd.com/ftp/245_ARAc.mp4). The commissure-to-commissure free-edge length of the left coronary leaflet suggested a 23-mm ring, as did the non-coronary; however, the right leaflet was 25. Therefore, the ring was downsized to 23, with the minor axis left/non-coronary post facing posteriorly.

After all annular sutures were placed, the three commissural sutures were tied tightly as a first step with eight good knots. Getting the sutures tied tightly is especially important. Then, one needle was passed downward and lateral through the pledget (away from the leaflet) and tied with 6–7 more knots. This “lateral suture fixation” has minimized technical complications, such as knot untying and leaflet contact with the suture tails. At the end, all suture knot towers faced laterally and the ring was buried into the annulus and could not be seen. Leaflet coaptation was tested by “pressurizing” all three leaflets simultaneously with closed DeBakey forceps and the leaflets were quite vertical, coapted well in the midline and had equivalent effective heights.

Attention then was turned to the aorta. Normal segmental sinus circumference should be just a little larger than the leaflet free-edge length (1-3) and in this patient, the right sinus was almost twice that dimension (see video). The non-coronary sinus also was much larger, but the left sinus was normal. The non-coronary and right sinuses were excised and the right coronary button was developed. A 30-mm Valsalva graft (7 mm larger than the annuloplasty ring) was chosen and the bottom skirt removed. Three 120° tongues were developed and the right and non-coronary tongues were sutured to their respective sinuses. The tongue for the normal left sinus was removed and the proximal root anastomosis was carried across the top of the left sinus. The single right coronary ostium was implanted into the graft and the distal aortic anastomosis was completed.

In the original clinical trials of aortic ring annuloplasty in aneurysm patients 7 years ago, outcomes were good (4), despite being very early in the technical learning curve. Shown in Figure 2, survival free of all complications was excellent, AI reduction was clinically and statistically significant, gradients were low and symptom reduction was good (4). Problems identified in the trials, such as annular suture untying and leaflet lacerations from long annular suture tails have been virtually eliminated in the subsequent 400 patients by lateral suture fixation. Thus, future clinical outcomes are likely to be even better. 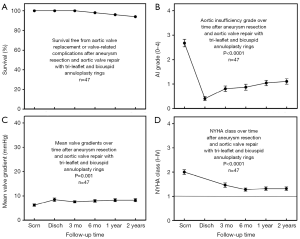 The most pathologic aortopathies, such as Ehlers-Danlos syndrome and Loeys-Dietz syndrome, might be excepted from this approach, and certainly, clinical judgment should be operative in all cases. Finally, more long-term follow-up data will be required for better understanding of this subject.