Transcatheter aortic valve implantation valve-in-valve (TAVI ViV) implantation has become common practice for treatment of moderate to high risk patients with a degenerated aortic valve bioprosthesis (1-3). Since there is a trend towards bioprostheses for surgical aortic valve replacement (SAVR), it is expected that the number of transcatheter ViV procedures will increase (1). Concerns have been raised regarding the technical feasibility and in particular the risk of residual transvalvular gradients following this procedure, in particular for small surgical bioprosthesis (1). Patient prosthesis mismatch and small surgical valves [inner diameters (ID) ≤20 mm] are known risk factors for high post procedural transvalvular gradients which in turn might affect mid-term outcome (1-6). In this study, we evaluated the outcomes of patients undergoing TAVI ViV implantation in a dedicated structural heart disease team.

The diagnosis and evaluation of bioprosthetic degeneration was made by echocardiography. The decision for TAVI ViV was made by a dedicated heart team including cardiac surgeons, interventional and non-interventional cardiologists, imaging specialists, and anesthesiologists, and was mainly based on surgical risk according to logistic EuroSCORE I and Society of Thoracic Surgeons (STS) Score as well as the morphology of the aorta and patient-specific factors such as frailty. The access route was either transfemoral or transapical depending on the comorbidities of the patient, with the transfemoral route preferred whenever both ways were possible. Doppler- echocardiography was performed at discharge. We analysed the pre- and post-interventional computed tomography (CT) scans as well as the peri-interventional and follow-up echocardiographic data. Follow-up visits were performed at irregular intervals by local cardiologists or at our outpatient unit.

The median true ID of the cohort was normally distributed around 20 mm. Thus, patients were initially stratified into a small diameter (true ID ≤20 mm) and a large diameter group (true ID >20 mm). Discrete variables are reported as counts (percentages) and continuous variables as median and quartiles. For discrete variables, we tested differences between groups with the χ2-test or Fisher’s exact test when expected cell sizes were less than five. The Mann Whitney U test was used for comparison of non-Gaussian continuous variables. In the two-sided test, a P value <0.05 was regarded as significant. For the survival analysis, the outcome of interest was ‘Alive’ or ‘Dead’ (whichever occurred within the observation period). The Kaplan-Meier method was used to estimate overall survival and the log rank test to compare the survival distributions of the two groups. A significance level of <0.05 was used. Statistical analyses were run with Stata statistical software package by StataCorp. 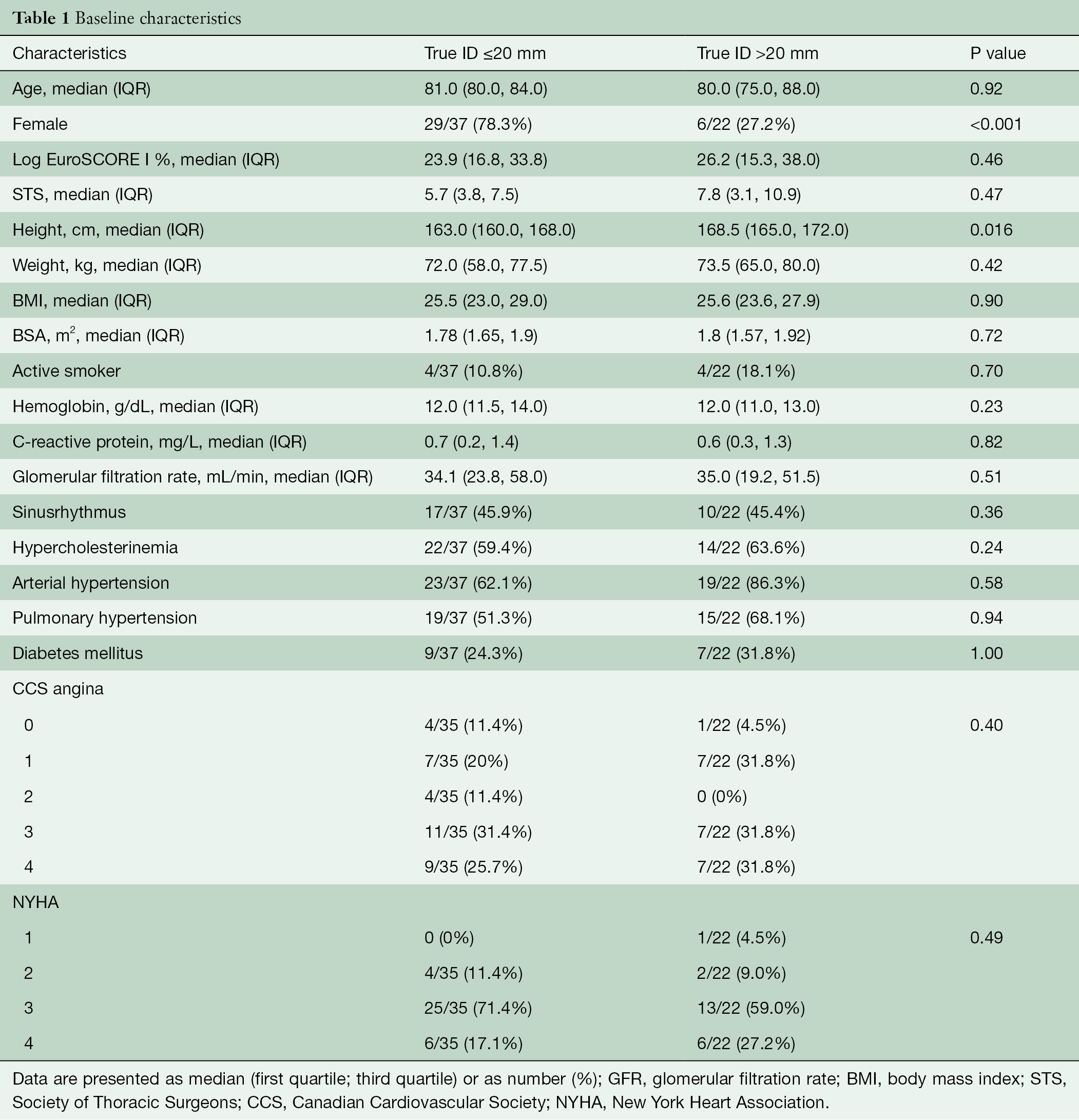 Table 2 shows differences in preintervention echocardiography and computer tomography. The median mean transvalvular gradient (Dpmean) before the procedure was 43.5 and 39 mmHg in small and large diameter groups, respectively (Table 2). Median pre-interventional maximum transvalvular velocity (Vmax) was 3.3 and 3.0 m/s for the small and large diameter groups, respectively. No difference between the groups was observed with regards to the pre-TAVI ViV left ventricular ejection fraction. The median effective orifice area index (EOAI) prior to the TAVI ViV procedure was 1.1 for the small diameter group and 1.2 for the large diameter group. EOAI based on the true ID showed no severe patient-prosthesis-mismatch (ppm) in both groups before the procedure. 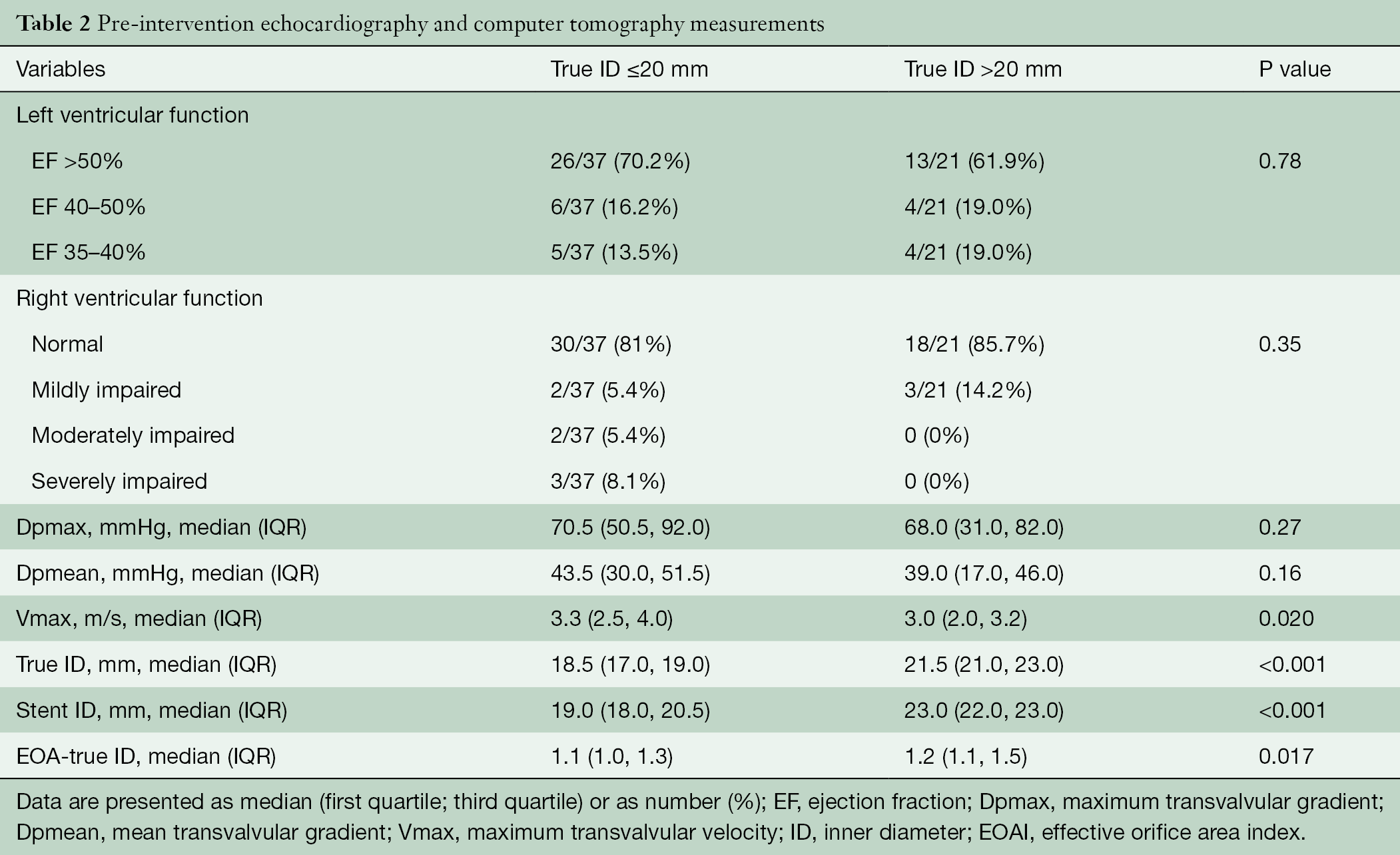 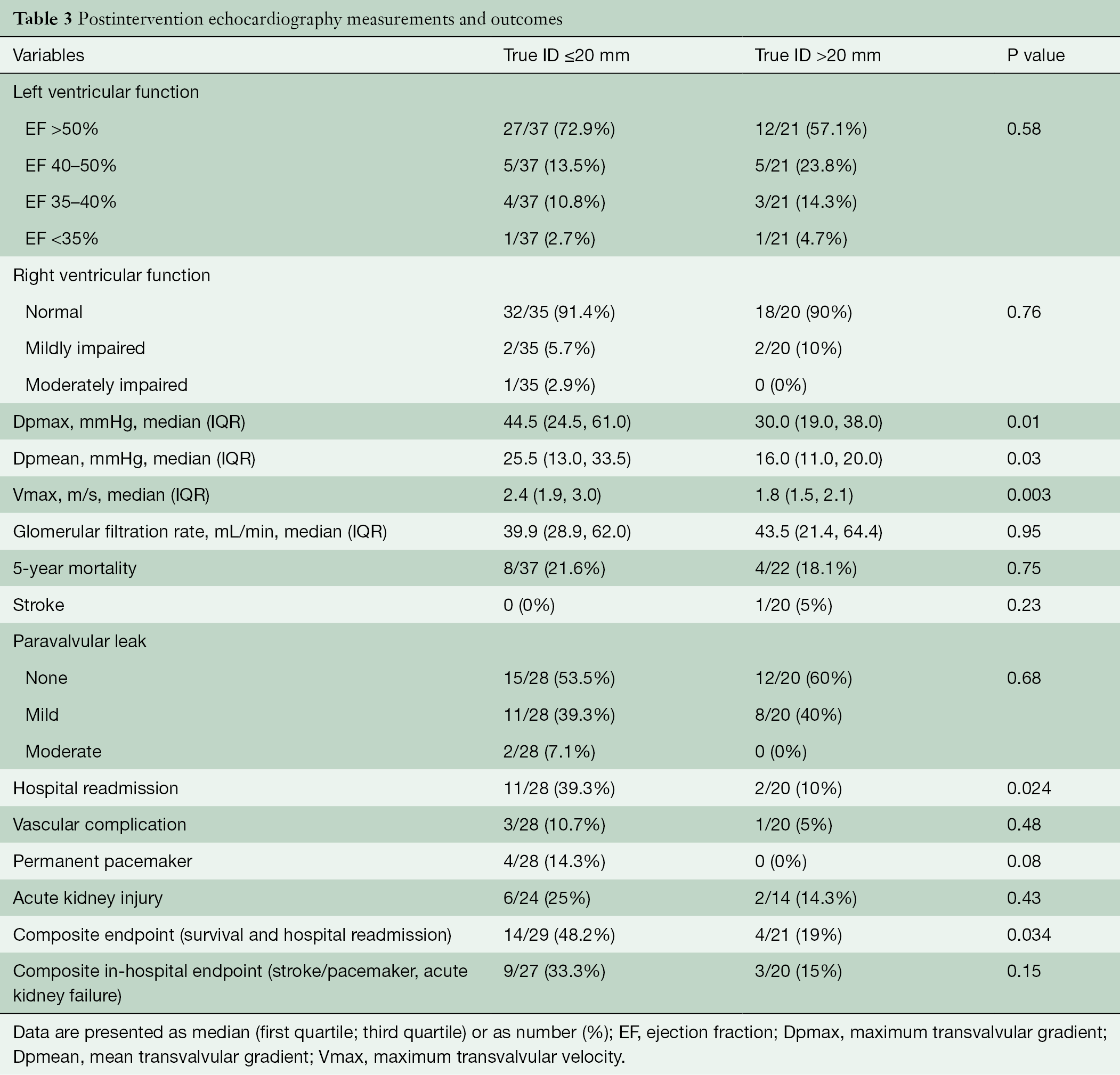 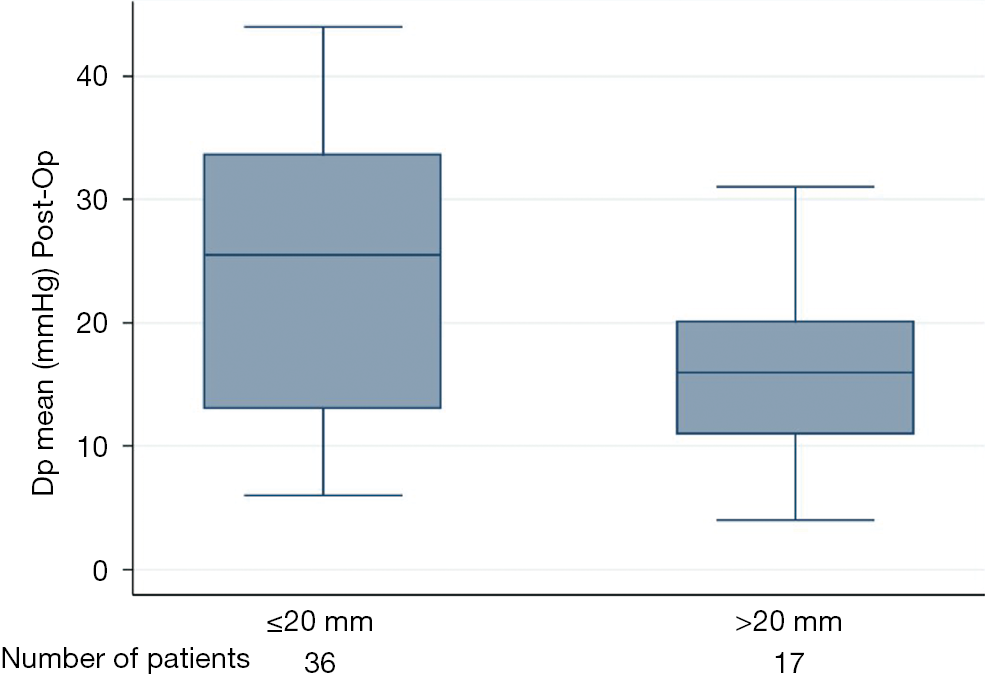 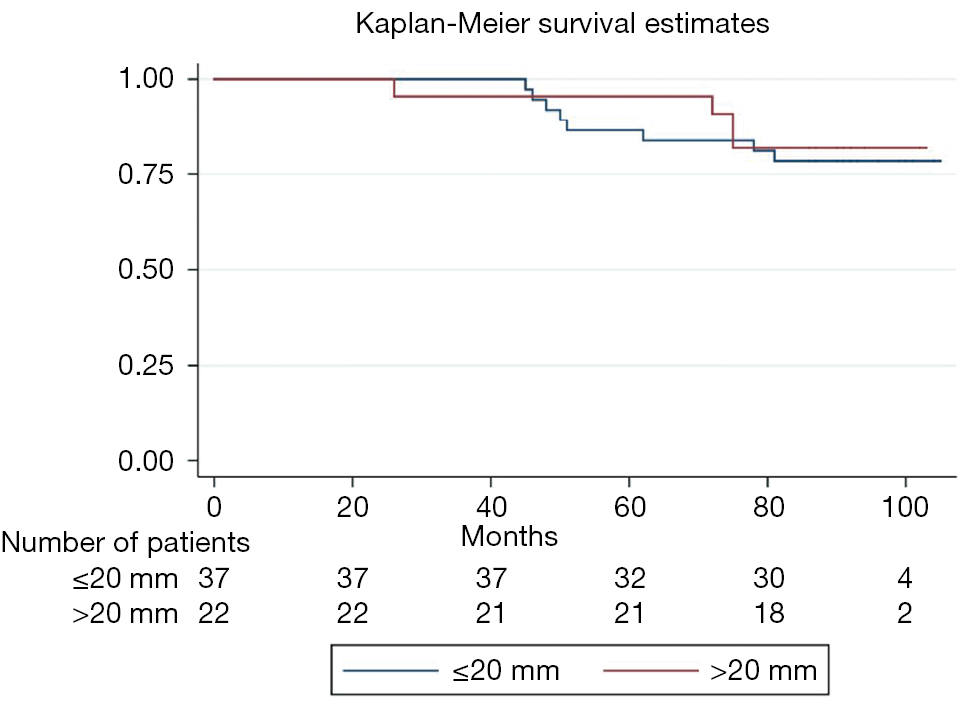 Transcatheter ViV implantation is gradually becoming common practice in treating degenerated aortic bioprostheses in moderate to high risk patients. The patients in the systematic review and meta-analysis by Phan et al. (1) had a mean age of 77.5 years and the mean logistic EUROSCORE I was thirty-one. Erlebach et al. (7) also showed in their work that patients receiving TAVI ViV were significantly older, had a higher mean logistic EuroSCORE and exhibited a lower mean left ventricular ejection fraction than patients receiving surgical prosthesis replacement. This is similar to our patient population with a median age of eighty-one as well as a median logistic EUROSCORE of 25%. These as well as other current studies (2,3) suggest that TAVI ViV is the treatment of choice for advanced age patients with a moderate to high surgical risk, and the guidelines support this treatment strategy (4,5).

In 2014, Bapat and colleagues (8) studied the effect of the internal diameter of a bioprosthetic valve and its implications for the ViV procedure using valve models. Their work provided a chart which is the basis of the values for the true IDs in this study. True ID is defined as the ID of the inflow of the surgical heart valve. The median true ID of this cohort was normally distributed around 20 mm: median true ID was 18.5 mm for the small diameter group and 21.5 mm for the large diameter group.

The median effective orifice area index prior to the TAVI ViV procedure in our patient cohort was 1.1 and 1.2 in the small and large diameter groups respectively. This is a marked difference to previous studies (9-17), which reported a higher rate of patient-prosthesis-mismatch with similarly small true IDs. Despite a low rate of patient prosthesis mismatch in our cohort, we observed relatively high transvalvular gradients in the surgical bioprostheses before TAVI ViV. This may be suggestive of a hemodynamic mismatch before the procedure.

Okuno et al. (18). report in their study that self-expanding valves were associated with a lower frequency of PPM implantation compared to balloon expanding valves irrespective of annulus area in native aortic annuli. In our study, we saw no difference in the occurrence of PPM with respect to the implanted valves.

The hemodynamic effects of small valve sizes, patient-prosthesis mismatch or residual transvalvular gradients following TAVI ViV procedure on survival have been investigated by several studies (2,9-17) and there is a tendency towards assuming that these gradients might lead to worse outcomes (12-21). This question could not be definitively answered in this study and although numerically more patients with a true ID of ≤20 mm died, this trend did not reach any statistically significant difference in the five-year mortality.

The idea of smaller ID and poor hemodynamic values correlating with a negative outcome seems to be implied in current studies (12-21), even though complete follow-up data for these patients are lacking. In our study, we see that the postoperative transvalvular values (Dpmean, Dpmax and Vmax) are significantly worse in the small ID group. Our follow-up over eighty months was complete and we observed that overall survival was good but hospital readmissions were higher in the small diameter group (11/28) than in the large diameter group (2/20). The stroke and PPM rates were relatively low with respect to the total population. All four patients with a PPM had previously received a stented surgical bioprosthesis (Carpentier Edwards Magna Ease; n=3 and Mitroflow; n=1) with the true ID varying from 17–19 mm. The transcatheter valve was implanted in all cases without any prior dilatation of the surgical prosthetic valve. The overall survival after eighty months was 78% and remained unchanged until the end of the observation period. We observed twelve deaths during follow-up; eight in the small diameter group and four in the large diameter group. The median age of our cohort was eighty years. Most patients died out of hospital and we cannot safely say if the cause of death was cardiovascular or otherwise. This difference in survival did not reach statistical significance. Bleiziffer et al. (2) and Seiffert et al. (3) report similar results with elevated gradients after TAVI ViV, which were not associated with poorer short-term survival and clinical outcomes. However, residual stenosis remains a problem, particularly in smaller bioprostheses and small true IDs. All readmissions were those recorded at our heart center, hence were due to cardiovascular reasons. Four were for pacemaker checkups, two were for control of the PV leakage at the time of implantation and the others were routine follow up echocardiography. From the available data we cannot be sure if the higher residual gradients for the small group resulted in higher rates of readmissions since we did not record the reasons for readmissions. Nevertheless, an association between both findings with higher morbidity due to higher gradients is possible and likely.

Rayol et al. (22) reported that PPM is a frequent and relevant hemodynamic complication of SAVR. Surgeons should prospectively calculate the predicted indexed EOA of the prosthesis and patient’s body surface area (BSA) and hence plan their surgical procedure adequately; either with an aortic root enlargement (Nikcs-Nunez or Manougian technique) or with a rapid deployment surgical valve to avoid PPM.

This analysis with a relatively small patient number is retrospective with all inherent limitations. There was no CORE Lab echocardiography standard before and after the procedure although the examination was consistently performed by experienced echocardiographers.

TAVI ViV in bioprostheses with a small true ID of ≤20 mm produces similar mid-term results in terms of mortality and periprocedural stroke rate as compared to larger prostheses. The periprocedural and mid-term transvalvular gradients, as well as hospital readmission rates are significantly higher in the small diameter group. The five-year mortality between both groups did not reach any statistically significant difference although numerically more patients with a true ID of ≤20 mm died during follow-up.

Funding: This trial was supported by the University Heart Center Freiburg · Bad Krozingen.

Conflicts of Interest: FJN reports grants and fees to the institution from Daiichi Sankyo, Astra Zeneca, Sanofi-Aventis, Bayer, The Medicines Company, Bristol, Novartis, Roche, Boston Scientific, Biotronik, Medtronic, Edwards Lifesciences and Ferrer. The other authors have no conflicts of interest to declare.