Surgical treatment of aortic valve (AV) disease has dramatically changed in the last two decades, particularly since the introduction of transcatheter guided AV-therapy (1). However, young and middle-aged patients requiring AV replacement are still confronted with a treatment dilemma: although mechanical valves bear the risk of thromboembolic and bleeding events, bioprosthetic substitutes have limited durability (2). Nevertheless, emerging technologies in alternative surgical treatment strategies in AV disease have not yet become an armamentarium with acceptable enduring long-term results (3-6). This includes advancements such as new generations of bioprosthetic substitutes with anticipated improved long-term durability, innovative mechanical prosthesis design with reduced need for anti-coagulation, decellularized allografts with the theoretical potential to overcome the high early failure rate of conventional AV prostheses due to minimized immunogenicity, and last but not least, the introduction of reconstructive procedures such as the Ozaki method. Taking these advancements into consideration, the Ross operation can play a central role with its numerous advantages (7). The Ross operation was initially performed as a subcoronary transplant, and further popularized with invention of the full-root technique (FRT). After the emergence of mid-term data suggesting unexpectedly elevated reoperation rates, utilization of the Ross operation was reduced (8). Remarkably, several working groups recently reported excellent long-term outcomes and low rates of reintervention following the Ross operation (9). Nonetheless, current guidelines recommend either a conservative approach or to disregard the Ross operation as an alternative treatment option (10,11). Although, long-term evidence in support of the original subcoronary technique is increasing, significant data in support of the reinforced FRT is relatively rare (12). Therefore, we report selected results from over 800 patients who have received the Ross operation with the reinforced FRT, encompassing a follow-up of twenty-five years. To date, this appears to reflect one of the largest studies of this kind reported in the literature.

Between February 1995 and June 2020, a Ross operation was performed in 832 patients at our institution. Baseline characteristics are displayed in Table 1. Indications for a Ross operation were AV stenosis (264 patients, 32%), AV regurgitation (154 patients, 19%), and a mixed AV lesion (414 patients, 50%) in combination with the patient’s request to eliminate oral anti-coagulation, a sportive lifestyle, women in childbearing years, or a contraindication to oral anti-coagulation. Contraindications for a Ross operation included greater than two-vessel coronary artery disease, connective tissue disorders or a history of rheumatic disease, severely reduced left ventricular function, significant anomalies of the pulmonary valve or a shortened life expectancy due to other explanations. The indications were in line with the current guidelines of the American Heart Association and European Society of Cardiology (10,11). 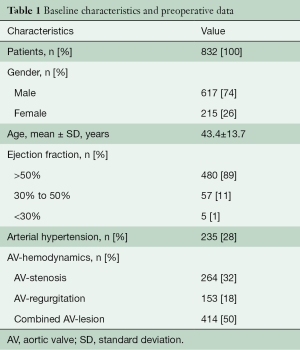 All patients included in this retrospective study were operated on with the FRT. A “freestanding aortic root replacement” without autograft reinforcement (AR) was performed in 224 patients, 27% (FRT) or with AR in 608 patients, 73% (FRT + AR). For right ventricle to pulmonary artery (RV-PA) reconstruction, mostly a cryopreserved homograft (n=768, 92%) was implanted. The operative technique of the reinforced FRT is demonstrated in detail in Video 1. Concisely stated, a standard cardiopulmonary bypass with bi-caval cannulation and mild hypothermia (34 °C) are performed in all patients. Cold blood cardioplegia (Buckberg-Solution, B. Braun, Melsungen, Germany) at twenty-minute intervals has been administered to induce and maintain cardiac arrest. After inspection of the AV, the main pulmonary artery is transected, inspected and assessed to be morphologically absolutely normal for usage as a pulmonary autograft. Once the autograft is prepared, it is trimmed, leaving only a 3–4-mm rim of muscular tissue (Video 1, sequence: preparation of the autograft). Subsequently, the AV is excised, the aortic root and both right and left -coronary buttons are mobilized. The autograft is sized using a Hegar dilator. Following this, three Prolene polypropylene sutures are equally placed into the native aortic annulus in each nadir and passed through the corresponding nadirs of the pulmonary autograft. Finally, the pulmonary autograft is fixed with the three Prolene polypropylene sutures to the native aortic annulus with ties. The proximal autograft anastomosis is performed using a running suture technique from one nadir to the other and then tied. In the FRT + AR group, a Dacron strip is incorporated in the proximal suture line, and a second suture line is fixed from the aortic wall remnant to the autograft to stabilize the native aortic annulus, thereby preventing consecutive autograft dilatation (Video 1,sequence: sewing of the autograft). The coronary ostia are also re-implanted into the autograft with a continuous suture technique (5/0 Prolene polypropylene; Video 1, sequence: re-implantation of the left-/and right-coronary arteries). The RV-PA connection is implanted proximally and distally using 4/0 and 5/0 Prolene polypropylene continuous sutures, respectively (Video 1, sequence: completion and manufacturing of the proximal and distal homograft anastomosis). The ascending aorta is replaced or sewn to the autograft (Video 1, sequence: suturing of the aorta-autograft anastomosis). Intra-operative data are shown in Table 2.

The study was approved by the local ethics committee (University of Tuebingen, Medical School; Clinical Trials ID: 484/2020BO). Follow-up was performed as outpatients on an annual basis using standard clinical examination, evaluation and transthoracic echocardiography. Peri- and post-operative events were registered according to the guidelines for reporting mortality and morbidity after cardiac valve interventions (13). The median follow-up time was 10.9±6.9 years (range, 0–24.9 years); total follow-up comprised 9,046 patients-years, with completeness of follow-up at 92%. Mean follow-up was 10.9±6.9 years. 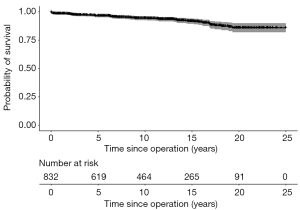 Figure 1 Survival probability of Ross patients operated on with the reinforced full-root technique. Patients at risk are also demonstrated.

One hundred and thirty-seven patients required a Ross-related reoperation during 9,046 patient-years of follow-up (Figure 2). The median time to first reoperation was 8.2 years, while reoperative hospital mortality was 1.1%. 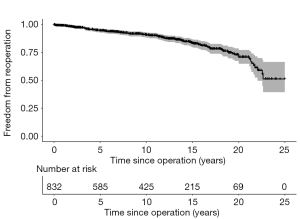 Figure 2 Actuarial estimates of freedom from autograft or RV-PA connection reoperation. Patients at risk and the estimated probabilities (with 95% confidence intervals) are presented. RV-PA, right ventricle to pulmonary artery.

Eleven patients suffered a transient ischemic attack (0.15%/patient-year), while the stroke rate was 0.7%/patient-year. A valve-related thromboembolism and major bleeding were evident in one patient (0.01%/patient-year), respectively.

The main objective of this study was to demonstrate surgical technique and present an overview of long-term data after the Ross operation using the reinforced FRT.

This series showed an excellent survival rate as late as twenty-five years following the Ross operation. This is noteworthy, as the study population, with a mean age of forty-three years, represents the “young and middle-aged” patient population facing this notorious treatment dilemma (2). Independent of the type of AV replacement (bioprosthetic or mechanical valves) implanted in young adults, poorer outcomes compared to Ross operation patients and a substantially lower life expectancy than the general population could be demonstrated (14).

The risk of reoperation after the Ross operation remains a matter of concern (15,16). A statistically significant incidence of progressive neo-aortic root dilatation has been reported when using the full-root technique (8). In the present study, freedom from autograft or RV-PA connection reoperation was extremely low and comparable with long-term results published for the subcoronary transplant technique (9). In 52% of autograft reoperations, the patients’ former pulmonary valve could be spared, mostly by the David procedure (17).

This work consists of the known shortcomings of a retrospective, observational investigation. Clinical and echocardiographic data were obtained on a prospective follow-up basis with an incomplete follow-up due to cross-regional patient distribution. In addition, patients receiving a Ross operation represent a pre-selected population, thus making it difficult to compare with alternative AV substitutes.

The Ross operation with the reinforced full-root technique is a technically challenging but feasible procedure in experienced and high-volume centres. If performed in this setting, the presented operative technique shows low morbidity and mortality as well as excellent long-term results with respect to freedom from autograft and RV-PA connection reoperation and survival, even twenty-five years after the index operation.

We thank Bianca Enderlin for her help with data acquisition.