The management of aortic valve disease is becoming increasingly complicated with the evolution of treatment options available to cardiac surgeons and cardiologists. The question of which operation is optimal for younger patients is particularly pertinent. A young patient will almost certainly have a life expectancy greater than the projected functional lifespan of a bioprosthetic valve replacement, whereas a mechanical prosthesis necessitates life-long anticoagulation and, is associated with an increased risk of thromboembolism and bleeding events (1,2).

Pulmonary autograft replacement of the aortic valve, or the Ross procedure, was developed in 1967 (3), whereby the pulmonary valve was excised from the right ventricular outflow tract (RVOT) and implanted in the aortic position using a subcoronary implantation technique. The RVOT is reconstructed using a pulmonary valve homograft. This operation aims to replace the aortic valve with autologous tissue, obviating the need for anticoagulation and should have long-term durability with physiological hemodynamic function. Since its inception, various techniques of performing the Ross procedure have evolved including autograft free-standing root replacement, which may be supported or unsupported in addition to the originally described subcoronary technique. In general, preference has been to use a homograft to reconstruct the RVOT, however, there is some experience using xenograft where there is no access to cryopreserved homograft.

Nonetheless, this operation is very technically demanding, involving a significant learning curve with a risk of early failure and the need for reoperation (4,5). Furthermore, operating on both the aortic and pulmonary valves introduces the risk of complications at both sites. Autograft failure can occur due to leaflet degeneration, annular or neo-aortic dilatation. Homograft failure can occur due to pulmonary regurgitation or more commonly, pulmonary artery stenosis.

In this systematic review we aim to determine the long-term outcomes of the Ross procedure performed in experienced centers in adults.

Eligibility for inclusion in this systematic review and meta-analysis included all studies that assessed the outcomes of adult patients undergoing treatment for aortic valve disease with the Ross procedure. In order to ensure sufficient center experience, papers were only included if more than thirty cases were reported. To ensure adequate follow-up duration was observed, only papers that detailed a minimum mean follow-up of five years were included. Only English language papers were analyzed. Studies with inadequate data regarding outcomes and studies in which we were unable to separate pediatric from adult populations were excluded. For the purpose of this study, patients aged sixteen years and older, are classified as an adult. If centers reported outcomes of overlapping patient series, the most complete, contemporary series was analyzed. Conference abstracts, case reports, editorials, reviews, letters and expert opinion pieces were excluded. Article identification and inclusion were performed independently by two authors (CD Flynn and JH De Bono) and discussed until consensus was reached.

For the assessed papers, data was extracted from the reviewed text, tables and figures. Data was extracted independently by two authors (B Muston and N Rattan), then checked and validated by a senior author (CD Flynn), with any discrepancies reviewed and discussed until consensus was reached. The recorded parameters included: operative technique used for autograft, RVOT reconstruction technique, patient demographics, early mortality (in hospital or within the first thirty days post-operatively), stroke and reoperation information (excluding emergency reoperation for tamponade, bleeding or low cardiac output state).

A priori subgroup assessments were to be performed on long-term reoperation rates determined by operative technique of autograft replacement and RVOT reconstruction strategy.

Meta-analysis of operative and post-operative variables was performed. Incidence data was assessed using Comprehensive Meta-analysis v3.3 (Biostat, Englewood, NJ, USA). For continuous data with central tendency described using median values, the mean and standard deviation were estimated using calculations described by Wan and colleagues (6). Due to the varied patient populations, a random-effects model was chosen for all analyses. Data significance and heterogeneity were assessed using the Cochrane Q statistic and the I2 test statistic respectively, with significance set at P value <0.05 and significant heterogeneity denoted by an I2 value >50. Guyot’s iterative algorithm was applied to digitized Kaplan-Meier curves to reconstruct individual patient data (7,8). This approach assumed a constant, non-informative censoring mechanism. The reconstructed patient data were then aggregated to form the combined survival curve. A log-rank test was not used to assess the significance of comparison between survival curves due to an increased level of assumption in the reconstruction. Digitization of source Kaplan Meier curves was performed using DigitizeIt (version 2.5.9, Braunschweig, Germany). Survival analysis was performed using R (R version 3.6.1, R Foundation for Statistical Computing, Vienna, Austria).

Study quality was assessed using the modified Canadian National Institute of Health Economics (CNIHE) assessment tool for case series (9) (Table S1). Studies were considered high quality if they addressed at least thirteen of the fifteen criteria outlined in the CNIHE tool, of moderate quality if ten to twelve criteria were addressed and of low quality if fewer than ten criteria were addressed (Table S2). Study quality was independently assessed by two investigators (B Muston and N Rattan) with review and consensus achieved with a senior author (CD Flynn).

The search strategy revealed 2,051 citations after duplicates were removed that underwent title and abstract review. No additional references were identified on review of reference lists. After initial review, 297 full text articles were reviewed and twenty-three papers were identified that fulfilled the pre-defined inclusion and exclusion criteria (see PRISMA flow chart, Figure S1).

Study quality was variable; four studies were deemed high quality, thirteen studies were deemed moderate quality, with the remaining six studies being low quality (Figure S1). Deficiencies in study quality tended to be due to the retrospective, single center study design, failure to detail losses to follow-up and poor reporting of conflicts of interest.

The total patient population consisted of 6,278 individual patients with a mean follow-up duration of 9.8 years [95% confidence interval (CI): 8.5–11.1 years, I2 =99%] (Table 1). The mean age of the patient population was 38.7 years (95% CI: 38.5–38.8 years, I2 =100%). The most commonly performed technique to replace the aortic valve with autograft was an unsupported free-standing aortic root replacement, which was performed in 3,130 patients (49.9% of patients). A supported aortic root replacement was used for 1,629 patients (25.9% of patients) with support being afforded by either autologous aortic tissue or prosthetic tissue. A subcoronary technique was used in 1,280 patients (20.4% of patients). The technique of implanting the autograft was undefined for 239 patients (3.4% of patients). Two papers included information for pediatric patient populations but sufficient data was available to differentiate the majority of the adult patient populations; for the paper by Oeser and colleagues (10) patients over the age of eighteen were able to be included and the paper by Bansal and colleagues (11), patients over the age of twenty were able to be included. 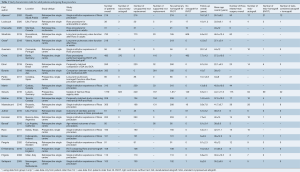 Subsequent endocarditis was reported in fourteen studies (12-15,17,18,20,21,23,24,26,29,30,32) with a total patient population of 3,305. Endocarditis occurred in seventy-four patients (2.24%) during the entire follow-up period, however, there is insufficient data available to determine the proportion of endocarditis that necessitated reoperation. 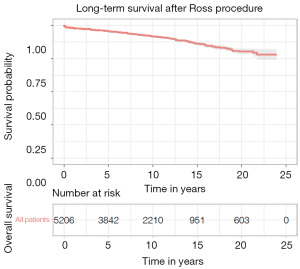 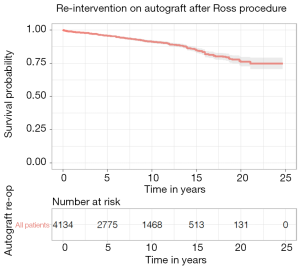 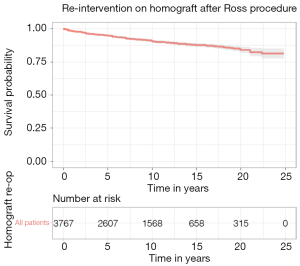 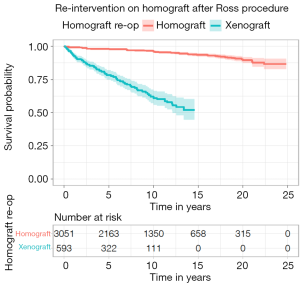 The two main concerns regarding the Ross procedure are the increased early peri-operative risks associated with a complicated operation in order to address aortic valve disease and, the durability of the aortic and pulmonary valve replacement. This study attempts to determine the true risk through thorough enhanced survival analysis, limiting analysis to experienced centers with published long-term data.

The landscape of aortic valve intervention has been consistently evolving over the last few decades for all treatment options, be it mechanical valves that require lower reference international normalized ratios (INRs) with improved transvalvular gradients (33), rapid deployment bioprosthetic valves to reduce implantation times and simplify operative intervention (34-36) and the revolutionary advent of transcatheter valve intervention. Nevertheless, the decision making on the optimal prosthesis for young patients is still far from easy. The Ross procedure is an often forgotten option that may be of benefit for certain population groups.

This meta-analysis of a large number of experienced centers has demonstrated highly durable results from both the aortic and pulmonary components of the operation with excellent freedom from reoperation. The management of the autograft in this study was varied between groups with unfortunately insufficient data available to determine if any difference in freedom from autograft re-intervention exists between the three main techniques. The subcoronary technique was the technique originally defined by Ross in 1967 and is a technically demanding operation that requires close attention be paid to the position of the commissures to ensure perfect valve geometry, otherwise placing the patient at risk of early autograft failure. The majority of patients in this series underwent a full root replacement technique requiring reimplantation of one or both coronary arteries. Frequently, the aortic annulus was supported with a strip of pericardium or Teflon felt to prevent annular dilatation. However, this technique does not provide any reinforcement to the neo-sinus. Leaving the autograft unsupported may risk progressive neo-aortic root dilatation as was seen as a common cause of reoperation in several studies included in this meta-analysis (12,15,26,32). Reinforcing the autograft with prosthetic or autologous tissue is a newer development in the procedure that aims to reduce the risk of mid- and long-term autograft failure by preventing progressive autograft dilatation. With the current data, Sievers et al. (22) did not demonstrate a difference at seventeen years between reinforced root and unsupported root techniques. Furthermore, Mastrobuoni et al. (24) also found no difference in reoperation rates between reinforced and free-standing implantation of the autograft. However, Buratto and colleagues (19) demonstrated very low twenty-year reoperation rates of 9% overall in a patient population who received a supported technique of autograft re-implantation. This is an interesting area of study with regards to the optimal long-term performance of the autograft in the Ross procedure.

An important finding is that reintervention on the RVOT was markedly increased with the use of xenografts for RVOT reconstruction. Although the data detailing the use of xenografts was derived from only two studies with a shorter follow-up period, the marked reduction in performance suggests that xenograft should only be used in exceptional circumstances. The use of homografts to reconstruct the RVOT is durable with exceptionally low long-term reoperation rates as low as 3% at twenty years, as demonstrated by Fricke and colleagues (37).

Current data in unique datasets are limited to predominantly single center studies that are retrospective in nature. However, the presence of one large multi-center registry data does represent real world data, however, there was insufficient data to meaningfully extract information regarding different techniques of autograft implantation. This is an area of interest as the method of autograft failure is frequently, through regurgitation, due to aortic neo-root dilatation.

When performed in experienced centers and for appropriately selected patients, the Ross procedure represents a durable replacement of the aortic valve with excellent long-term survival and, relatively low rates of re-intervention on the autograft and RVOT homograft. Furthermore, the use of xenograft to repair the RVOT does not appear to be a durable substitute and should be avoided where possible.