STEMI is more likely to be associated with a transmural infarction than NSTEMI (5). A transmural AMI is a pre-requisite for ventricular wall rupture and hence is more common after STEMI than NSTEMI (4,5).

Ventricular septal rupture is the most common type of mechanical complication after AMI (1,4). In Elbadawi’s report (4), of 13,767 patients who suffered mechanical complications, 10,344 (75%) developed a ventricular septal defect (VSD) and the remaining patients developed mitral regurgitation due to ruptured papillary muscle (19%) or free wall rupture (6%). The most important determinant of outcome in post-infarction VSD is the development of heart failure (left, right, or both) and cardiogenic shock (2-5). The severity of heart failure is related to the extensiveness of myocardial necrosis and the left-to-right shunt. Cardiogenic shock in patients with anterior VSD is often associated with extensive left ventricular infarction and in patients with posterior VSD is associated with extensive right ventricular infarction (6-9). The magnitude of the shunt is also an important determinant of cardiogenic shock in both cases (7,8). Although the diagnosis of post-infarction VSD can be made by auscultation of the heart, it may be difficult to differentiate from acute mitral regurgitation and a bedside trans-thoracic echocardiogram will usually confirm the diagnosis. Some degree of mitral regurgitation in patients with posterior VSD is common because of posterior wall and papillary muscle infarction. Medical treatment is ineffective and most patients die within 4 weeks (10). Thus, surgery or a catheter-based intervention is needed to save these patients. We believe that immediate surgery offers the best chance of survival after post-infarction VSD (3).

Cooley and colleagues reported the first case treated with surgery using an approach through the right ventricular outflow tract (11). This approach does not offer adequate exposure of all parts of the septum and a few years later, most surgeons adopted an incision through the infarcted left ventricle (12). The location and length of the incision depends on where the defect is: apical, anterior or posterior septum. Daggett and colleagues from the Massachusetts General Hospital made important contributions to the surgical treatment of this lesion (13,14). They introduced the concept of ‘infarctectomy’ and reconstruction of the interventricular septum and infarcted ventricular wall with Dacron patches (15). Apical VSDs were managed by apical amputation and approximation of the walls over strips of Teflon felt, and more extensive infarcts by infarctectomy and reconstruction of the septum and ventricular wall with separate patches of Dacron fabric (15).

In 1987, we introduced a new operative procedure whereby no infarctectomy was done and the left ventricular cavity was largely excluded from the infarcted myocardium with a pericardial patch sutured to the endocardium of the left ventricle (2,3). We coined the term ‘infarct exclusion’ to describe this approach and we continue to believe it is the best therapy for patients with an extensively infarcted septum, particularly in cases of posterior VSD. Apical VSD can be safely repaired as originally described by Daggett and associates (13-15), and this is illustrated in Figure 1. 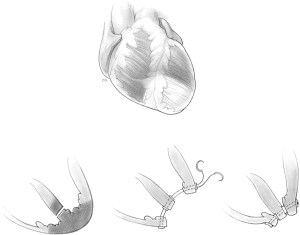 Myocardial revascularization should be done before septal repair in patients with multi-vessel coronary artery disease. If the VSD is associated with single vessel disease, surgical revascularization will depend on what was done percutaneously prior to the septal rupture. If the single diseased coronary artery was reopened by percutaneous coronary intervention (left anterior descending in anterior VSD and right coronary artery or dominant circumflex in posterior VSD), there is no need for bypass grafting. If the artery remains occluded, revascularization may be beneficial to improve left or right ventricular function. There is no point in bypassing an artery if it supplies only infarcted myocardium.

In patients with anterior VSD, an incision is made in the apex of the left ventricle 10 to 15 mm lateral to the path of the anterior descending artery, through the infarcted muscle, and extended just above where the septal defect is located. The margins of the infarcted septum and anterior wall are identified. A glutaraldehyde-fixed bovine pericardial patch is tailored in the shape of the left ventricular infarct. This patch is usually oval and measures approximately 4 cm × 6 cm in most patients. The pericardial patch is then sutured to the lower part of the non-infarcted endocardium of the interventricular septum with a continuous 3-0 polypropylene suture as illustrated in Figure 2. The patch is also sutured to the non-infarcted endocardium of the anterolateral ventricular wall. If the infarct involves the base of the anterior papillary muscle, the suture is brought outside of the heart and buttressed on a strip of bovine pericardium or Teflon felt, applied to the epicardial surface of the left ventricle. Once the patch is completely secured to the endocardium of the left ventricle, the infarcted septum becomes largely excluded from the left ventricular cavity. The ventriculotomy is closed over two strips of bovine pericardium or Teflon felt, as illustrated in Figure 2. No infarctectomy is performed unless the necrotic muscle along the ventriculotomy sloughs at the time of its closure. This area will be exposed only to right ventricular pressure once cardiopulmonary bypass is discontinued. The space between the patch and infarcted wall becomes obliterated within a few days. 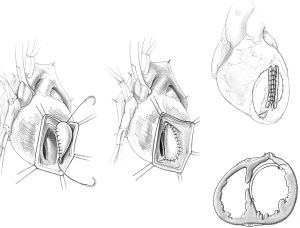 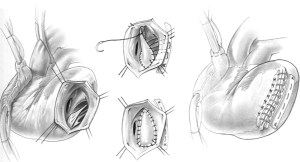 Figure 3 Repair of posterior ventricular septal rupture. The apex of the heart is secured to the upper part of the skin incision. An incision is made 5 mm from the posterior descending artery along the posterior left ventricular wall and extended proximally close to the mitral annulus and distally toward the apex. A bovine pericardial patch is sutured to the mitral annulus from its mid-portion and toward the medial commissure until healthy septum is identified. The medial part of the patch is sutured to the infarcted posterior wall using full thickness bites buttressed on a strip of bovine pericardium or Teflon felt on the epicardial surface immediately adjacent to the insertion of the posterior papillary muscle. The other side of the patch is sutured to the healthy endocardium of the septum. The ventriculotomy is closed without resecting any infarcted wall. 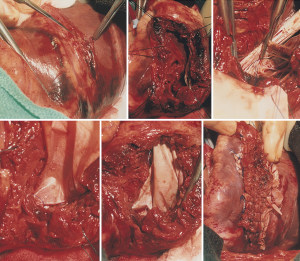 Figure 4 Intraoperative photographs of a ruptured posterior septum repair as described in Figure 3.

The first report of transcatheter closure of a post-infarct VSD was 1988 (16). This is a complex procedure and not all patients are candidates, particularly those with posterior VSD given their proximity to the mitral valve and complexity of the regional anatomy. Schlotter and colleagues (17) conducted a systematic literature review to evaluate the effectiveness of percutaneous closure of post-infarction VSD. They identified 13 series of more than 5 cases per report, for an overall 273 patients (17). Cardiogenic shock was present in 48% of cases, the timing of the intervention was within 2 weeks from rupture in 42% and successful device implantation rate was 89%. The in-hospital mortality rate in patients successfully treated was 32% (17). The authors concluded that transcatheter closure is an alternative to surgery in selected patients. Larger experience is needed before deciding if this is indeed as effective as surgery to treat post-infarction VSD, particularly in the long-term.

A report on the surgical outcomes of post-infarction VSD based on the STS Database from 1999 through 2010 indicated that only 2,876 patients underwent surgery in 666 participating institutions with an average of 0.09 to 3.7 patients/year per cardiac unit (18). Thus, very few surgeons operate on more than one patient per year. The overall mortality was 42.9%, higher in patients who had surgery within seven days from the AMI (54.1% vs. 18.4%) (18). I was the invited discussant of that paper and I pointed out that I had reviewed the surgical experience with post-infarction VSD at Toronto General Hospital from 1990 to 2010, with 91 patients identified. The overall operative mortality was 40%, but nine surgeons performed the operations and mortality among surgeons ranged from 20% to 100%—it appears to be related to the number of operations each surgeon performed. Two surgeons operated on 49 patients and nine died whereas seven surgeons operated on 43 patients and 22 died. Repetition makes perfect and it is difficult to gain experience with an operation that is now so rarely performed. In addition, these operations are difficult and likely cannot be mastered by most surgeons largely due to its rarity. Thus, in order to improve the outcomes of post-infarction VSD, patients should be referred to centers where both surgical and catheter-based techniques expertise are available (19,20). I firmly believe that patients with post-infarction VSD should be operated on as soon as the diagnosis is made to prevent worsening of the clinical presentation. If the expertise to do that is not available, hemodynamically stable patients should be transferred to referral centers as soon as the diagnosis is established, and patients in cardiogenic shock should have a device implanted to mechanically support the circulation (Impella or venous-arterial extracorporeal membrane oxygenation) and then should be transferred to a large center. The probability that the above proposal for the management of these patients will come to fruition may be more utopic and realistic.