Royal Papworth Hospital became aware of the Pulmonary thromboendarterectomy (PTE) operation in the mid-1990s and was impressed by the results achieved by Stuart Jamieson at the University of California at San Diego (UCSD). In 1996, a group led by surgeon John Dunning was formed to start a PTE program. A small number of patients with chronic thromboembolic pulmonary hypertension (CTEPH) waiting for heart-lung transplantation were thought to be suitable for this operation and were offered the choice. The first patient underwent PTE at Papworth hospital on 22 January 1997. These early patients were often very sick and the current success of the program owes much to the pioneering effort 25 years ago, and the courage of those early patients. In 1999, Papworth Hospital and the Pulmonary Hypertension and Transplant Unit at Newcastle submitted a joint proposal to the UK specialist commissioners to start this service in the UK. In the following year, the then National Commissioning Group at the Department of Health decided to start the UK PTE program with a single center to enable one team to build up experience quickly for optimal patient outcomes. From 2001, a national network of specialist pulmonary hypertension (PH) centers was also designated. All patients with suspected CTEPH in the UK are referred to Royal Papworth Hospital for assessment and potential treatment. David Jenkins took over as lead surgeon for the service in 2003 and there are currently three other surgeons performing this operation: Steven Tsui, Choo Ng and John Taghavi.

During the era described here, there were several publications and conferences that influenced practice in PTE surgery and the understanding of CTEPH. In 2003, the publication of the first 1500 PTE cases from UCSD established the success of this treatment and set the benchmark of 5% as an acceptable in-hospital mortality rate at the time (1). It also clearly demonstrated that the threshold for improved survival immediately following surgery was reducing the pulmonary vascular resistance (PVR) below 500 dynes/sec/cm-5. In 2007, the International CTEPH Association (ICA) started enrolling patients in a prospective consecutive registry and the outcomes of the 386 CTEPH patients who were treated with PTE surgery were reported in 2011 (2). This demonstrated the reproducibility of the procedure with 17 surgical centers achieving an in-hospital mortality of 4.7% and a one year mortality of 7%. In 2013 the 5th World Symposium in PH recognised CTEPH as requiring its own task force and introduced additional treatments for inoperable patients with the first licenced drug (Riociguat) and the potential of balloon pulmonary angioplasty (BPA) (3). The CHEST-1 study had just been published, demonstrating that Riociguat reduced PVR and improved six-minute walk distance in patients who were inoperable or who had residual PH after PTE (4). In 2016, the long term follow up of the ICA registry was published, showing that operated patients had a three-year survival of 89% compared with 70% in those who did not have surgery (5).

We therefore reviewed our cumulative experience, starting from commencement of the novel program, to chart the development into a mature national service. We aimed to review the relationship of activity and outcomes over time in the context of improved understanding of CTEPH during the era studied.

We performed a retrospective analysis, on our dedicated prospectively captured PH database, to identify all patients who underwent PTE surgery for CTEPH from January 1997 to September 2019. This allowed six months for complete post operative data inclusion prior to the reduction in elective activity secondary to the COVID-19 pandemic.

To evaluate the progression of our experience over more than 20 years, this complete consecutive series was divided and analyzed in four equal cohorts. The primary outcome was 30-day mortality and the secondary outcome one year survival. Complete follow up for survival was possible as patients were traced via individual National Health Service (NHS) numbers.

In addition, we systematically searched MEDLINE to find all relevant clinical publications that included patients from these cohorts to review and discuss the direct influence on our PTE program.

Over this 23-year period, from the commencement of our program to September 2019, 2,116 PTE operations were performed for patients with CTEPH at Royal Papworth Hospital by five consultant surgeons. The mean age was 57.8 years (range, 11–89 years), with no significant change over time. To assess change over time, patients were divided into four equal cohorts and there were 529 patients in each cohort. The first 25% of operations were performed over a 12-year period, whilst the most recent 25% were performed in less than three years. There was a steady increase in activity in each era with the largest increase between cohort one and two. Patient characteristics and outcomes are summarised in Table 1. Over time, the pre-operative mean pulmonary artery (PA) pressure trended down, although the PVR trended upwards. There was a larger percentage reduction in PA pressure post-operatively with increasing experience.

The 30-day mortality has progressively fallen from 12.3% in the earliest cohort to 1.9% in the most recent cohort (P<0.001). The medium-term survival has also continued to improve in successive cohorts (Figure 1, P=0.006). The largest improvements were seen between the first and second cohorts. 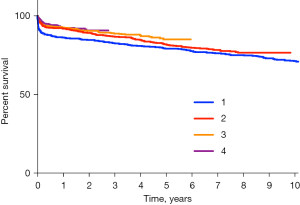 Figure 1 Percentage of patient survival of cohorts one to four over ten years.

Over this 25-year period, we have shared our experience and lessons learnt directly from treating these CTEPH patients through 17 original peer reviewed clinical publications.

We found both a consistent increase in annual activity and reduction in 30-day mortality post PTE between each patient cohort studied. The reduction in early mortality translated into improved one-year and medium-term survival. The largest improvement was seen between the first and second cohorts. There was little change in patient demographics over time. This improvement in patient outcome is likely to reflect both the learning curve of patient selection and of the PTE procedure. For the first two cohort eras, PTE was the only guideline recognized treatment available for patients with CTEPH. For the third and fourth cohorts, drug therapy was available for those deemed inoperable, which may have influenced practice. By the end of the third cohort era, BPA became available in the UK and this may have had a further small influence. Unlike other series reported, the patients with CTEPH described here represent a complete national cohort of operated patients in a single country as to the best of our knowledge; no other PTE procedures have been performed in the UK outside of Royal Papworth Hospital since 2000.

There has been evolution in our practice during the treatment of these successive cohorts. The main influences, in relation to the relevant cohort era are discussed below. Early in our experience, when we had performed fewer than 500 PTE, we wondered whether we could reduce complications by avoiding deep hypothermic circulatory arrest (DHCA) (6). We found the procedure was possible with antegrade cerebral perfusion, but there was no significant advantage in terms of patient outcome. Later, for patients in the first cohort, we performed a definitive randomized trial comparing the techniques with detailed cognitive assessments and demonstrated conclusively that the original technique with DHCA was recommended (7). A further change to our peri-operative protocol involved a change from the use of aprotinin to tranexamic acid, occurring in the first cohort (8). Again, during the first cohort, we reported the benefit of extracorporeal membrane oxygenation (ECMO) to treat peri-operative complications of PTE from 2006 (9). We were one of the first units to examine longer term outcomes, rather than in-hospital results, proving that conditional survival after three month follow up was >90% at five years, even for the first cohort reported here (10). This was extended to explore the influence of residual PH following PTE surgery, with our initial report for patients treated in the first cohort indicating that residual PH resulted in lower functional improvement but equal conditional survival (11). This study was later extended into a more detailed, longer follow up including all patients from the first two cohorts. This demonstrated a ten-year survival of 72% and that a residual mean PH of >38 mmHg and PVR of >425 dynes/sec/cm-5 negatively influenced survival (12).

As we became more experienced and results improved, we widened the indication for PTE surgery, reporting for the first time satisfactory outcomes in patients >70 years of age (13) and subsequently in patients >80 years (14). We were also the first to report specific outcomes for patients with chronic thromboembolic disease (CTED) without PH at rest (15). We found that patients with abnormal red cells and hemoglobinopathies presented unique challenges but could be successfully treated (16). Few patients required redo PTE surgery, but the outcomes in those that did were acceptable (17). Moving away from in-hospital and longer-term survival, we were one of the first groups to examine patient reported outcomes and quality of life, demonstrating significant improvement in proportion to hemodynamic changes following PTE surgery (18). From the end of 2015, a BPA program was developed, alongside the PTE program and 30 patients deemed inoperable were treated with BPA during the era of the last two cohorts (19).

There are limitations to this report that is retrospective by design. The patients described here were all treated in a single center over more than 20 years and the improvements in survival demonstrated were likely due to multiple factors. There were multiple internal and external influences on our practice during this time. Therefore, no cause or effect could be ascribed to any single intervention. The hemodynamic parameters quoted in Table 1 reflect the immediate peri-operative measurements and may differ from right heart catheter measurements performed at initial assessment and longer term follow up, but are consistent for each individual patient.

It is clear that the most pronounced improvement occurred after the initial cohort was treated and hence the implication is that the institutional ‘learning curve’ for PTE surgery may be up to 500 procedures. This fits with later independent evaluations suggesting a technical learning curve of approximately 125 procedures for each individual surgeon in this program (20). With a better understanding of CTEPH and the availability of drug treatments and BPA, it may be that initial results in a contemporary era could be better than historical results described here. The improvements demonstrated over this period also confirm that for a medium sized country, the decision to concentrate experience for a demanding elective procedure in a single center was probably appropriate.

Currently, patients in the UK continue to be referred to a single national multidisciplinary meeting at Royal Papworth Hospital and PTE surgery, drug therapy and BPA can all be considered. Treatment decisions are tailored on an individual basis. Some patients may require more than one modality of treatment, and the most important unanswered question remains which is the best relative order to carry out these three treatment modalities in patients with a mixed distribution of CTEPH.

We acknowledge the contribution of all staff at Royal Papworth Hospital to the care of the patients described here and in particular our PH colleagues both locally and in the designated UK PH centers who have referred the majority of these patients.