Chronic Thromboembolic Pulmonary Hypertension (CTEPH) is the only cause of pulmonary hypertension (PH) curable by surgical removal of endoluminal fibrotic material resulting from previous pulmonary embolisms. Surgical treatment availability, development of PH centers and improvement of the follow-up of patients presenting with acute pulmonary emboli have shed light on the diagnosis of CTEPH, initially considered as a rare disease. Although pulmonary endarterectomy (PEA) has proved its efficiency (1) with a one-, two- and three-year survival of 93%, 91% and 88%, respectively, it is not applicable to the entire population of CTEPH patients. During the past decade, the development of targeted medical therapy (2) and balloon pulmonary angioplasty (BPA) (3,4) have offered the possibility of PEA to challenging patients as part of a multimodal approach (5). Whether PEA after medical or BPA bridging therapies impacted surgical results remains debatable considering the delay in the time to referral for PEA, the higher mortality of medical bridged patients from the International registry (1) and the risk of combined interventional treatments (BPA and PEA) (6). Our aim is to report our experience of PEA during the past five years in the era of the multimodal approach.

The study included all consecutive patients who underwent PEA for CTEPH between January 2016 and February 2020. The study was reviewed and approved by the French Society of Thoracic and Cardiovascular Surgery ethics committee which waived the need for informed consent.

All patients were evaluated at the national referral center for PH, Bicêtre Hospital, before referral to Marie Lannelongue Hospital for surgery following multidisciplinary board discussions. Complete preoperative work-up included right heart catheterization, lung ventilation and perfusion (VQ) scan, pulmonary arteries computed tomography (CT) scan, pulmonary angiogram on request, pulmonary function tests, cardiac echography, carotid arteries duplex scan and evaluation of associated co-morbidities as requested. We started a BPA program in February 2014 concomitant to the increased use of CTEPH targeted therapies (soluble guanylate cyclase, endothelin antagonist and PDE-5 antagonist). Patients were deemed operable when occlusive vascular lesions were evaluated as surgically accessible, and the patient was fit enough to endure surgery. From 2016, the multidisciplinary board has indicated multimodal treatments, combining surgery with medical therapy and/or BPA, for challenging surgical cases with distal disease and hemodynamic severity [>10 wood units (WU) of pulmonary vascular resistance (PVR)]. Decisions on medical therapy induction were made on the basis of discrepancies between hemodynamic severity and vascular obstruction on imaging. BPA was initiated before PEA in cases with distal lesions on one side and proximal, surgically accessible lesions on the contralateral side.

PEA was performed through a median sternotomy under cardiopulmonary bypass (CPB), deep hypothermia and circulatory arrest. A true endarterectomy, removing obstructive material from each pulmonary artery and its lobar, segmental and distal branches, was conducted during circulatory arrest with consideration of back-bleeding arising from the hypertrophied systemic circulation to the obstructed lung (7). Circulatory arrest time was kept as low as possible and therefore was only used when back-bleeding could not allow adequate visualization during the endarterectomy. Once first side endarterectomy had been completed, CPB was resumed until a second arrest was required for the contralateral endarterectomy. This sequential technique with intermediate reperfusion limited the cumulated period of circulatory arrest. In cases where BPA had been performed before surgery, only the side which did not undergo angioplasty was endarterectomized with a single circulatory arrest. Video assistance was helpful in pursuing endarterectomy in distal branches, and aided surgical assistants by giving correct access to the operative field. Cardiac protection was provided by cardioplegia during aortic cross clamping. Intermittent aortic cross clamping with aortic reperfusion between right and left endarterectomy has been used since 2018. Patients were weaned from CPB after re-warming once central temperature reached 36 ℃. Peripheral extracorporeal membrane oxygenation (ECMO) and central pulmonary artery to left atrium (PA-LA) Novalung were used as bridge to recovery or transplantation in case of hypoxemia and/or refractory hemodynamic instability after weaning from CPB. Peripheral veno-arterial (VA) ECMO was preferentially used as bridge to recovery as previously published (8). Conversely, PA-LA Novalung was preferentially used as bridge to transplantation in young patients with severe disease who underwent planned salvage endarterectomy as a last resort after pre-transplantation work-up completion. Post pulmonary reperfusion hemoptysis may occur during rewarming, requiring pulmonary hilum cross-clamping, endobronchial bronchoscopic clearance, CPB weaning and emergent embolization of bronchial arteries.

Pulmonary vascular targeted therapy was always continued until surgery and resumed as soon as possible after endarterectomy regardless of the early surgical result. Preoperative anticoagulation medication management was as per usual and did not differ from other types of surgery. Anesthesia management improved over time, while preserving several principles such as the use of a bladder temperature probe, the preservation of right femoral vascular access for further potential ECMO support, the use of right internal jugular vein triple lumen central venous catheter (16 cm, 8.5 Fr) and pulmonary artery catheter (Swan-Ganz catheter) (Edwards Lifesciences, Irvine, CA, USA). The CPB circuit was primed with 5,000 IU of heparin and either 1,000–1,500 mL of balanced crystalloid or 1,000–1,500 mL of 4% human albumin (vialebex, LFB Biomedicaments, Les Ulis, France). Anticoagulation was achieved with heparin (300 IU·kg−1), and activated clotting time (ACT) was kept over 400 s during CPB. Pump flow rates were individualized and maintained above the patient’s pre-CPB cardiac output value and mean arterial pressure values were kept between 70–80 mmHg. During CPB, ultra-protective ventilation with a tidal volume of 3 mL·kg−1, FiO2 of 30% and a PEEP of 5 cmH2O were used. When the temperature reached 30 ℃, 120 mg of methylprednisolone was infused, and at 24 ℃, sodium thiopental (1 g) was given through the CPB circuit. After weaning from CPB, once the patient was hemodynamically stable, residual heparin was neutralized with protamine sulfate (heparin to protamine ratio of 1.5:1). The blood remaining in the CPB circuit was re-transfused to the patient after salvage processing at the end of the procedure. Insulin was administrated as a continuous infusion to maintain a blood glucose level <10 mmol·L−1. The trigger for the transfusion of allogeneic packed red blood cells was a hemoglobin concentration below 7 g·dL−1 during CPB and below 9 g·dL−1 after the end of surgery. After heparin reversal, fresh frozen plasma, platelets or fibrinogen were given only in the presence of diffuse bleeding associated with abnormal coagulation values confirmed using either laboratory values or a rotational thromboelastometry (ROTEM), depending on the anaesthesiologist in charge of the patient.

Successful PEA was determined based on immediate hemodynamic improvement allowing CPB weaning. Early post-operative mortality was evaluated by 90-day mortality. Rates of post-operative complications including pulmonary edema, hemoptysis, bleeding, and pneumonia were evaluated. As there is no clear definition of persistent PH, it is reported as the immediate % decrease in mean pulmonary artery pressure (mPAP).

Population of the study

A total of 418 patients (225 males and 193 females) underwent PEA for CTEPH at our institution between 2016 and 2020 (Figure 1). All patients were allocated into three groups for the study: the PEA group (n=336), the targeted therapy induction group (n=69) and the BPA induction group (n=13). One patient from the PEA group was not included in statistical analysis due to missing data. Preoperative (baseline) pulmonary vascular resistance was similar between groups (Table 1) as was the sex ratio, past medical history of deep vein thrombosis, pulmonary embolism, splenectomy and indwelling catheter placement. Interestingly, the BPA induction group had older patients with lower diffusing capacity for carbon monoxide (DLCO). 69% of BPA induction patients were concomitantly medically treated with targeted therapy. Patients with medical treatment induction had a lower body mass index (BMI). One case of emergent PEA for right heart failure was performed in the usual PEA group. 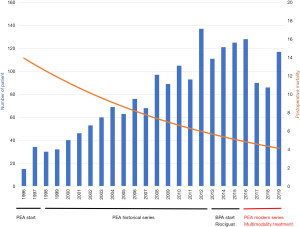 Our study showed that PEA achieved a similar mPAP drop regardless of the type of preoperative treatment. However, patients operated on after medical induction experienced worse early survival and outcomes. BPA allowed shorter procedures in elderly patients with satisfactory results.

Early outcomes after PEA are well described in many series and registries published in the early 2010’s (9-11). In expert centers, PEA is efficient and well tolerated with in-hospital mortality of less than 5%, equivalent to other cardiac surgeries. Our results from the PEA group, consisting of 336 patients, are consistent with these historical results with 3.9% in-hospital mortality, 5% associated coronary artery revascularization and 4% emergent endarterectomies in the face of right heart failure. ECMO was particularly useful when CPB weaning was impossible as a bridge to recovery (25 patients, 86%), bridge to salvage BPA (three patients, 10%) or bridge to transplantation (one patient), with a discharge rate of 69% which is consistent with the results of published series (8,12,13). The success of ECMO support is determined by its indication, and the risk of lung reperfusion edema or airway hemorrhage outweigh the risks associated with persistent PH or right heart failure. In the latter, salvage BPA has demonstrated disappointing results in decreasing right ventricular afterload enough to allow recovery (14). However, we demonstrated that BPA before PEA may be indicated in more elderly patients. Age is not considered a contraindication to PEA (15), as older patients can still benefit from hemodynamic improvement despite longer intensive care unit stay and higher postoperative mortality. In our series, we reported a 0% mortality with shorter operative times and similar hemodynamic improvement without increasing postoperative risk. We did not perform endarterectomy at the level of treated arteries. BPA targeted distal lesions characterized by CT scans and pulmonary angiograms. The advantage of performing BPA before PEA compared to postoperative BPA (6) remains in limiting the cumulative risk of an additional interventional treatment and shortening the length of surgery. Sixty-nine percent of the BPA induction group were previously treated by targeted therapy, demonstrating that the worse outcomes seen in the medical treatment induction group may not be due to the medication itself. The benefit of medical therapy as a bridge to PEA has not been demonstrated. The international registry (1) has found that bridging targeted therapy was a risk factor for death after PEA. Prospective and retrospective studies have so far failed to demonstrate benefit from bridging patients to PEA (5). However, in our series, patients from the targeted therapy induction group seemed to be more severe based on the longer circulatory arrest time, the more severe preoperative hemodynamics and the higher rate of postoperative ECMO. While it seems that PEA in medically treated patients is more challenging due to more distal obstructions, 87% of these patients had the same hemodynamic improvement compared to the other groups, despite the higher risk of surgery. Hence, the multimodal approach has brought older and more severe patients to surgery who have benefited from the CTEPH gold-standard treatment.

Our study has some limitations starting with the retrospective nature of our work and the highly selective population of the study. Our work could only report the expertise of our center in selecting patients for multimodality treatment. Nothing could be extrapolated from treatment indications. However, it is the first time that early surgical results have been reported based on the type of bridged treatment. Besides the type of treatment, we found that the method of selecting patients for treatment impacted surgical results. Prospective studies are warranted to better consolidate indications of multimodal treatment, which seems to be the future of CTEPH management.

The multimodal therapy approach to CTEPH patients did not affect the effectiveness of PEA. Medical therapy and BPA may act in synergy with surgery to treat more challenging patients. Further studies are needed to consolidate the best strategies and open the field of personalized CTEPH treatment programs.

We thank Stéphane Morisset for statistical review of the paper.

Conflicts of Interest: OM, EF, MH, XJ and GS are members of MSD scientific board on CTEPH.