Pulmonary endarterectomy (PEA) is the treatment of choice for chronic thromboembolic pulmonary hypertension (CTEPH). The surgery can be done with an operative mortality of less than 5%, a rate of blood transfusion of less than 50% and a hospital stay of less than two weeks on average (1). The results are excellent in the long-term with five-year survival greater than 80% (2). The majority of patients will not require any additional therapy other than life-long anticoagulation (3).

Preoperative pulmonary vascular resistance (PVR) is one of the most important predictors of postoperative mortality after PEA. According to the International CTEPH Registry, PVR greater than 1,200 dynes.s.cm–5 at diagnosis is associated with a significant rise in hospital mortality compared to PVR of less than 800 dynes.s.cm–5, with mortality rate of 10.6% compared to 2.8%, respectively (4). Other groups have also observed that preoperative PVR greater than 1,000 dynes.s.cm–5 was associated with an operative mortality greater than 10% (5-9). More recently, the group from University of California, San Diego (UCSD) has shown that with increasing experience, the hospital mortality can decrease to less than 5% in patients with preoperative PVR >1,000 dynes.s.cm–5 (5). In our experience in Toronto, the option of post-operative extra-corporeal membrane oxygenation (ECMO) has also provided increased safety in operating on patients with severely increased PVR, particularly in the context of decompensated right heart failure (RHF) and segmental disease. This option has seen hospital mortality decrease from 13.2% to 1.7% (10).

The long-term outcome after PEA in the context of severely increased preoperative PVR is not well defined. Some studies suggest that preoperative PVR is an independent predictor of mortality up to three years after PEA, although others do not (3,11). It is also increasingly recognized that some patients will benefit from targeted pulmonary hypertension (PH) medical therapy or balloon pulmonary angioplasty (BPA) after PEA, but the impact of preoperative PVR on the need for additional therapy after PEA has not been analyzed systematically (3). The primary objectives of this study were therefore focused on the early and long-term results after PEA in patients with PVR >1,000 dynes.s.cm–5 at the time of diagnosis compared to patients with lower PVR.

After approval by the Toronto General Hospital Institutional Research Ethics Board for waived consent (19-5181), we performed a retrospective analysis of a prospectively collected consecutive cohort of adult patients undergoing PEA at the Toronto General Hospital between August 2005 and March 2020. Patients undergoing PEA for sarcoma and vascular malignancies were excluded.

PEA was performed on cardiopulmonary bypass (CPB) with deep hypothermic circulatory arrest (DHCA) at 20 °C based on the bladder temperature probe, with at least one circulatory arrest for each side (3). Briefly, after median sternotomy, CPB was initiated using a 22 Fr aortic cannula and two single stage 32 and 36 Fr venous cannula advanced into the superior and inferior vena cava, respectively. Once at 24 °C, the aorta was cross-clamped and 1 liter of cold high potassium cardioplegia was given. Cold cardioplegia was repeated every 20 to 30 minutes. The right pulmonary artery (PA) was opened from behind the aorta to the right upper pulmonary vein and the plane of endarterectomy elevated in each segment. Circulatory arrest was then performed at 20 °C. Each circulatory arrest was limited to 20 minutes. After completion of the right side, the PEA was performed on the left side in a similar manner using a curved incision on the anterior aspect of the left PA.

The PEA specimen was characterized at the time of surgery according to the Jamieson classification (12). Type 1 was characterized by fresh thrombus in the main-lobar pulmonary arteries, type 2 by intimal thickening and fibrosis with or without organized thrombus proximal to segmental arteries, type 3 by fibrosis, intimal webbing and thickening with or without organized thrombus within the segmental arteries only, and type 4 by the absence of visible thromboembolic disease. Type 4 disease was limited to five patients. These patients were mostly identified early in our experience and grouped with type 3 as the absence of visible thromboembolic disease may have been related to the learning curve in the context of segmental disease.

Severe CTEPH was defined by PVR greater than 1,000 dynes.s.cm–5 at the time of diagnosis. A comparative study was then performed between patients with pre-operative PVR >1,000 dynes.s.cm–5 and those with PVR <1,000 dynes.s.cm–5. Patients were occasionally treated preoperatively with targeted PH medical therapy by the local PH team. If initiated, targeted PH medical therapy was stopped at the time of PEA. After PEA, patients recovered in Toronto until their discharge from hospital. Patients were then referred back to their home PH centers across Canada for further follow-up. Decision to initiate targeted PH medical therapy after PEA was made by the referring PH centers. All patients were followed in the long-term by the referring PH centers and the date of death or last follow-up was recorded.

Demographics and other results were reported as mean ± standard deviation (SD), or median and interquartile range (IQR). Categorical variables were compared by chi-squared analysis and continuous variables by Student’s t-test. Survival was determined by using the Kaplan-Meier method. The log-rank test was used to determine survival differences. Threshold for statistical significance was a P value less or equal to 0.05. Statistical analysis was performed using GraphPad Prism, Version 8, https://www.graphpad.com/scientific-software/prism/.

The duration of CPB was similar between patients with PVR greater and lower than 1,000 dynes.s.cm–5. The duration of circulatory arrest was, however, longer in patients with PVR >1,000 dynes.s.cm–5 (Table 2). A total of twenty-one patients underwent combined procedures with coronary artery bypass graft (n=20) or mitral valve replacement (n=1), with a similar proportion amongst both groups. An additional six patients underwent resection of an intracardiac mass, atrial septal defect (ASD) closure or sinus venosus ASD closure. 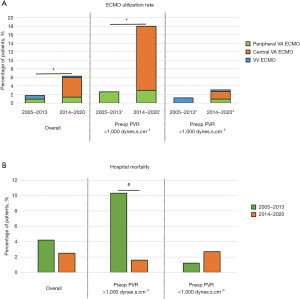 Outcomes at six-month, one-year, and two-year 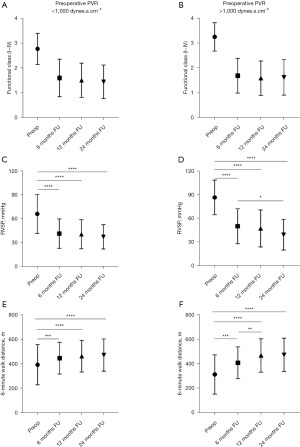 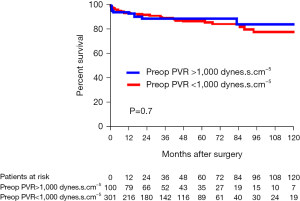 In this single center analysis, we compared the patients’ characteristics, perioperative outcome and long-term results in patients with preoperative PVR greater and lower than 1,000 dynes.s.cm–5 referred to our institution from PH centers across Canada. We observed that patients with preoperative PVR greater than 1,000 dynes.s.cm–5 were more severely ill with 93% in NYHA functional class III and IV, 29% on home oxygen and 26% requiring hospital admission for RHF. A larger proportion of these patients were also started on targeted PH medical therapy preoperatively.

In our experience, the most challenging patients to manage have been those presenting with a combination of PVR greater than 1,000 dynes.s.cm–5, segmental disease and advanced RHF (7). These patients often have difficulty weaning off CPB and present a particularly high risk of pulmonary edema and hemodynamic instability postoperatively (9). These difficulties are reminiscent of those seen in patients undergoing bilateral lung transplantation for end-stage pulmonary arterial hypertension, where the risk of pulmonary edema is particularly high and the operative mortality is generally greater than 10% (13).

The importance of atrophic remodeling of the left ventricle (LV) with impaired lusitropy and diastolic dysfunction has been emphasized as one of the main risk factors contributing to the development of pulmonary edema after bilateral lung transplantation (13,14). This problem is predominant in patients with advanced RHF due to long-standing precapillary PH and can be overcome by slowly weaning VA ECMO over several days after surgery (15-19). This strategy dramatically reduced the postoperative risks after bilateral lung transplantation for pulmonary arterial hypertension by allowing the LV to progressively adapt to the lower PVR and increased cardiac output (16,17). We used a similar strategy in patients with severe CTEPH who have difficulty separating from CPB after PEA due to advanced RHF, by using central VA ECMO support for a few days after PEA (10). This approach led to a major reduction in the hospital mortality from 10.3% to 1.6% in patients with preoperative PVR >1,000 dynes.s.cm–5.

VA ECMO is associated with significant risks and this option should therefore be used selectively in patients with difficulty weaning from CPB due to either residual PH with hemodynamic instability, or with persistent severe hypoxemia despite inhaled nitric oxide and optimization of mechanical ventilation (10). We observed that the PVR does continue to improve for the first few days after PEA, possibly due to resolution of pulmonary edema, reverse remodeling of the pre- and post-capillary vasculopathy as well as improvement in the left and right ventricular function (9,19,20). Therefore, bridging patients with severe CTEPH and advanced RHF with partial support on VA ECMO for two to three days after PEA in our experience did provide important benefit by both allowing the right and the left ventricles to recover from prolonged CPB and gradual reduction in PVR (10).

This study demonstrates that in the long-term, the results of PEA are comparable in patients with PVR greater and lower than 1,000 dynes.s.cm–5. The ten-year survival is about 80% in both cohorts, including the operative mortality, demonstrating the major benefit of PEA even in the sickest patients, as long as they can overcome the perioperative complications. Patients with preoperative PVR >1,000 dynes.s.cm–5 do, however, more frequently require targeted PH medical therapy after PEA and it is therefore important to monitor these patients in the long-term after surgery. The implementation of BPA in recent years could also provide an opportunity to optimize the benefit of PEA in these patients with more advanced disease.

In conclusion, patients with severe CTEPH are an important group of patients to consider for PEA. These patients often have the most to gain from surgery. The functional improvement is excellent even though up to a third of these patients may require additional targeted PH medical therapy after PEA. The ten-year survival exceeds 80%, which is remarkable considering the poor outcome that these patients would face without PEA.