Despite the development of numerous improvements in surgical techniques and materials, the mortality rate associated with postinfarction VSR remains high. Indeed, according to contemporary and systematic reviews, the operative mortality rates are 38.2% and 42.9%, respectively (1,3).

According to annual reports from the Japanese Association for Thoracic Surgery, 650 VSR repairs were performed between 2009 and 2018 (4-13). The 30-day mortality rates were between 22.1% and 32.0% (Figure 1). The outcomes have not improved as much as we had expected. In addition, it is well known that a residual shunt may affect cardiac function or late outcomes after a VSR repair. The reported incidence of residual shunt rates after VSR repair ranges from 23–43% (14,15). 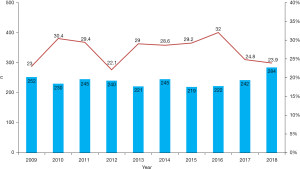 Since the first surgical case report, many procedures have been proposed to decrease postoperative residual shunts. Among them, the infarct exclusion repair described by David and Komeda has become a popular procedure (16). Recently, the sandwich technique via a right ventricle incision has been reported with relatively good outcomes (17,18). In 2004 we began treating postinfarction VSR using the triple patch technique, which is a modified infarct exclusion method (19,20). Before 2004, we performed VSR repairs using the original infarct exclusion method; however, postoperative residual shunts were present in 50% of cases. We assumed that this problem might depend on the technical complexity of the procedure. Therefore, we modified the conventional infarct exclusion technique to easily determine the size and shape of the left ventricular pouch, and to make it simpler to suture the patch to the myocardium.

A median sternotomy is performed under general anesthesia. Cardiopulmonary bypass is initiated using ascending aorta and bicaval cannulation under mild hypothermia. Coronary artery bypass grafting (CABG), if necessary, is performed on the beating heart before the VSR repair. Both antegrade and retrograde cold blood cardioplegia provide myocardial protection. The operative scheme is shown in Figure 2. A VSR repair is performed through a longitudinal left ventriculotomy in the infarcted area, approximately 2 cm away from the left anterior descending coronary artery (anterior type) or the posterior descending artery (posterior type), depending on the site of MI.

After suturing, Bioglue (CryoLife Inc., Kennesaw, GA, USA) is applied to the suture line area on the muscle side. These two patches are then cut and sewn to determine the ideal size and shape of the pouch fitting the left ventricular cavity. These patches are sutured with 4-0 polypropylene over and over running sutures.

Finally, glue is applied to fill the cavity between the first patch and the pouch, and the ventriculotomy is closed with two teflon felt strips and 2-0 polypropylene mattress sutures.

Between April 2004 and December 2020, VSR repairs using the triple patch technique were performed in 42 patients at our institution. Patient demographics, clinical characteristics and early outcomes are summarized in Table 1. The mean age was 74.6±9.2 (range, 49–90) years. Twelve patients (28.6%) were in cardiogenic shock at the time of surgery. An intra-aortic balloon pump (IABP) was used in all patients preoperatively.

The 30-day mortality rate was 21.4%. Eight of these patients were in cardiogenic shock preoperatively, three of whom had a posterior VSR. The incidence of permanent stroke was 2 (4.8%). Six patients (14.3%) had a residual shunt after VSR repair. The overall 10-year survival rate was 59.9%, and the overall freedom from cardiac-related death at 10 years was 84.9% (Figure 3). There were significant differences in surgical outcomes between patients who underwent anterior and posterior VSR repairs.

Patients who died during the first 30 days

Prognosis of patients with a residual shunt after VSR repair

During the follow up period, the residual shunt disappeared 6 months after VSR repair in one patient, gradually decreased in two and remained unchanged in one. A patient with a postoperative Qp/Qs of 1.5 died 5 years after surgery due to non-cardiac disease. The residual shunt flow did not worsen over time.

Patch fixation and the use of glue

An ideal suture line may be difficult to choose in the acute setting. Therefore, the patch should be gently and softly placed with an over and over running suture to avoid overtightening or myocardial tearing. In addition, the suture should be inserted from patch to patch through the myocardium (Figure 4A). Using this suture method, the patch can be fixed securely with minimal shifting from the position. It is acceptable if the running suture is slightly loosened, because the patch can be firmly attached to the endocardium using glue. Reinforcement using glue is also one of the important options for the VSR repair. Fibrin glue or Bioglue are used at our institution. Recently, we began routinely using Bioglue. Some authors have reported that the glue can reduce the residual shunt and the wide adhesion can prevent excessive pressure on the suture line (21,22). Moreover, Komeda reported that BioGlue renders the fragile myocardium stiffer and easier to suture (23). We also believe that the use of glue is ideal to secure patch fixation, even though the myocardium is infarcted or weakened. It is also important that gauze is placed inside the left ventricle before using glue to prevent dripping glue into the left ventricle (Figure 4B).

In addition, no bleeding from the left ventriculotomy closure occurred in our series, which may be due to the effectiveness of the glue applied in the dead space or around the ventriculotomy. 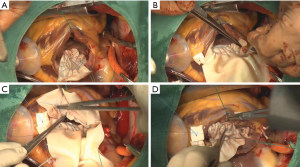 In contrast, in a systematic review and meta-analysis of surgical repairs of postinfarction VSR, Matteucci et al. reported that there was no significant protective effect with simultaneous CABG in terms of the early mortality rate (3). Sakaguchi et al. argued that revascularization of transmurally infarcted myocardium is illogical because the culprit artery is often entrapped in the suture line of the ventriculotomy, which can make bypass impossible (27). We agree, for the most part, with their opinion. In addition, most of the culprit arteries were completely occluded in VSR patients based on our experiences. Therefore, we generally perform CABG for other stenotic coronary arteries, but not the culprit artery. Indeed, no cardiac events related to the culprit artery for VSR occurred during our follow up period. In our series, percutaneous coronary intervention (PCI) for culprit lesions was performed in seven patients with acute coronary syndrome before diagnosing postinfarction VSR.

In the case of hemodynamic instability, mechanical circulatory support is often required, which can complicate treatment due to organ dysfunction. As pre- or post-operative management, we commonly use IABP in VSR patients and V-A ECMO in hemodynamically unstable patients. In terms of survival, the influence of preoperative organ dysfunction is also considerable, as previously reported (20). We also recognize that the poor outcome is related to extensive MI.

One of the mechanical circulatory supports, Impella (Abiomed, Danvers, MA, USA) may be an alternative device for the treatment of VSR, especially in patients with LOS, although we have no experience in the use of Impella. Some authors have reported that the Impella can improve surgical outcome for postinfarction VSR (29-32). Impella has been shown to effectively reduce afterload and decrease flow through the VSD, thus leading to an increase the in mean arterial pressure and a decrease in the pulmonary capillary wedge pressure. It has also been reported that Impella’s effect of reducing the left ventricular load is superior to that of IABP (33). The purpose of Impella is to achieve recovery from myocardial damage by assisting antegrade blood flow and reducing the load on the ventricle. As a result, the use of Impella may reduce organ damage compared to ECMO alone. Moreover, Via et al. reported that Impella allows bridging to appropriately timed surgical repair (34). Therefore, Impella may change the surgical strategy for postinfarction VSR before and after repair, although Imeplla also has several problems, such as bleeding or hemolysis. We hope that Impella will contribute to improved prognosis among patients with postinfarction VSR.

The early and late outcomes of modified infarct exclusion using the triple patch technique are acceptable. This technique is safe and simple, and may be useful for reducing postoperative residual shunts.