Papillary muscle rupture (PMR) is a rare mechanical complication post-acute myocardial infarction (MI). It affects 0.07–0.26% of patients following MI and accounts for 5% of mortality after an infarct (1,2). It results in severe mitral valve regurgitation (MR), which is often accompanied by cardiogenic shock and pulmonary edema, requiring urgent management (3). The risk factors for PMR include older age, female sex, history of heart failure, delayed presentation following MI and chronic kidney disease. Medical management alone is associated with a mortality as high as 75% in the first 24 hours (4). PMR was first reported by Davison in 1948 (5) and the first mitral valve replacement for PMR was reported by Austen et al. in 1965 (6,7). There has not been a significant change in the management of patients presenting with acute PMR who require hemodynamic and ventilatory support followed by urgent or emergent mitral valve intervention.

Anatomy of the mitral sub-valvular apparatus

The mitral valve complex consists of the mitral valve annulus, anterior/posterior mitral leaflets, the sub-valvular apparatus [chordae tendineae and papillary muscles (PMs)] and the left ventricular wall (8,9). The PMs are located between the apex and the middle third of the left ventricle. They are connected by the chordae tendinea to the ventricular surface of the mitral valve leaflets. The sub-valvular apparatus as a whole function to prevent prolapse of the mitral valve into the left atrium during systole. Multiple attempts have been made to classify PMs, however, there is marked variation in their anatomy. The classical description is the presence of two PMs, however, in a post-mortem examination of PM this configuration of two PMs was only present in 3.4% of cases, whereas 43% had two groups of PMs, 31% had three groups and 21% had four groups (10). Other variations noted were PMs with ‘separate bases and fused apex’, ‘single base and divided apex’, ‘small projections’ of PMs, long PMs, ‘perforated’ PMs and those with a ‘base attached to a large bridge’ (10). These variations in PM may have implications in the feasibility and complexity of mitral valve repair (10).

PM dysfunction due to ischemia result in MR. In acute ischemic MR, the postero-medial PM is most commonly involved as it receives a single blood supply via the posterior descending artery whereas the antero-lateral PM receives dual supply from the left anterior descending and diagonal or the circumflex artery (2,9). Jouan et al. described four mechanisms of ischemic mitral valve prolapse (Figure 1): necrosis of a separate commissural head (inserted close to the annulus) with rupture of the anchorage of the commissural chord (Figure 1A); necrosis of a single head PM subdivided in multiple heads with partial rupture (Figure 1B); necrosis of a fenestrated PM with detachment of its main insertion: “incomplete” rupture (Figure 1C); single PM with complete and total rupture (Figure 1D) (11). 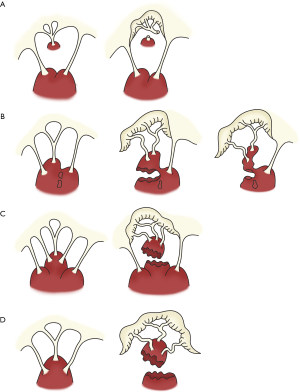 Patients presenting with breathlessness and or chest pain a week following a MI should be suspected to have a PMR. It is imperative a thorough history and clinical examination is carried out. On auscultation, patients who do have murmurs can have mid, late or holosystolic murmurs. Symptoms and signs will be in keeping with acute left heart failure with rapidly progressing cardiogenic shock and hypoxia (9).

The gold standard investigation is echocardiography which typically reveals a mobile mass attached to a flailing mitral leaflet with evidence of severe eccentric MR. Left ventricular function may be normal or low-normal with regional wall abnormalities. Transthoracic echocardiography (TTE) has a sensitivity of 65–85% while transesophageal echocardiography (TEE) has a sensitivity of 92–100% (12). TEE is important in interrogating the mitral leaflets/sub-valvular apparatus to study the pathology/etiology of the regurgitant jet and various anatomical measurements that are required for the different treatment strategies. In most cases of PMR, the patients get massive MR due to bi-leaflet prolapse (muscle giving chords to multiple segments). As a result, on echocardiography you see severe MR or hyperdynamic ventricle without evidence of severe volume overload (very large left atrium or left ventricle), hence these patients go into acute pulmonary edema.

Pre-operative angiography is also important to determine the extent of coronary artery disease and may reveal occlusion of the infarct-related artery (7).

In the initial phase of presentation with acute MR, these patients require medical optimisation;

Once the diagnosis of acute MR secondary to PMR has been made, definitive management requires correction of the MR without delay. The strategy for management of these patients due to ischemic PMR is dictated by the patient’s co-morbidities, the anatomy of the rupture, i.e., location and degree of the PM involvement (partial vs. complete), anatomy of coronary artery disease, the different intervention options available and local expertise guided by a consensus opinion from heart team discussions. Interventions to treat MR include percutaneous and surgical techniques. The practice to revascularize during concomitant mitral valve intervention in acute MR is variable.

The current gold standard treatment of PMR is surgery.

Chordal sparing mitral valve replacement is more commonly carried out in the setting of acute PMR. Multiple case series have been published with reported in-hospital mortality of 20–25% (13,14). Similarly, 5- and 10-year survival of 65–68% and 32–56%, respectively (15-17). Bouma et al. highlighted preservation of sub-valvular apparatus in mitral valve replacement is associated with better long-term survival (18).

Gillinov et al. in 2001 highlighted predictors of repair failure in chronic ischemic MR; presence of complex jet, lack of left internal mammary artery (LIMA) to left anterior descending artery (LAD) graft and lateral wall infarct (19). Mihos et al. proposed an echocardiographic-based treatment algorithm for repair over replacement (20). There have been multiple clinical trials and observational studies investigating outcomes after severe chronic ischemic MR, advocating mitral valve replacement over repair due to a higher incidence of recurrent MR in the latter group (21). There is scarcity of evidence of superiority of repair over replacement after PMR due to the rare nature of this entity.

In multiple observational studies, including case series and case reports of patients who developed PMR following an acute MI, the core principles of repair in these patients were largely based on Carpentier’s reconstructive valve techniques (11,13,14,18,22-37). The different surgical techniques used to repair the mitral valve in these studies included:

The preference for mitral valve repair when compared to mitral valve replacement appeared to be higher in earlier studies reducing to 17% in the most recent case series (13), reflecting surgeons’ preference for mitral valve replacement. Mitral valve repair failure rate ranged from 4% to 50% (11,13,14,18,22-37). This is likely to be due to a combination of edema, progression of tissue necrosis and lack of tensile strength in the ischemic tissues. Over the last three decades, apart from a reduction in the incidence of PMR to 0.07% from 1% to 5% as reported in the case series by Pahuja et al. (37), there has not been a significant improvement in surgical in-hospital mortality which has largely remained in the region of 25% (11,13,14,18,22-37). This is un-surprising as the conduct of the surgery and mechanical circulatory support has largely remained unchanged.

In the case series described by Budra and colleagues, three patients developed PMR after presenting with inferior STEMI, resulting in severe MR and cardiogenic shock (40). All three patients underwent off pump neo-chord implantation ranging from two to three chords with a chord also used to secure the sub-valvular apparatus. All patients had moderate MR on discharge. They re-presented two to five months later with severe MR. The etiology of MR progression was due to rupture of native chords in two patients, entrapment of ruptured PM in the coaptation zone and rupture of artificial chordae in the other patient. Two patients underwent mitral valve replacement and one mitral valve repair with no in-hospital mortality. In the case series described by Heuts et al. seven patients underwent the above procedure for isolated P2 prolapse, a median of five chords were used and showed trivial MR at one-year follow-up (39). It might be that a higher number of chordae may be required to support the prolapsing leaflet in the setting of PMR, although it is a hypothetical observation. In a recent review of 203 patients following transapical off-pump NeoChord implantation, the incidence of moderate or higher residual MR at discharge was 13% (41).

The off-pump neo-chordae implantation in the case series by Budra and colleagues may serve as a bridge to recovery and subsequently to surgery in patients for whom surgery is precluded in the acute setting. Further studies will be required to determine the practicality of neo-chord implantation in PMR and their short- and long-term outcomes.

Other transapical devices include the Tendyne (Tendyne Holdings, LLC, Roseville, MN, USA) and the Intrepid (Medtronic, Minneapolis, MN, USA) which are self-expanding valves and are used in the setting of severe MR (42). However, to date there has not been any case descriptions of these valves being used in PMR. Future studies will be required to establish the feasibility of these valves in the setting of PMR.

The current era of minimally invasive procedures is continuously evolving with multiple new medical innovations since the successful introduction of the trans-catheter aortic valve. However, the complex anatomy of the mitral valve, annulus, sub-valvular apparatus and proximity to the left ventricular outflow tract makes a single device that can address all mitral pathologies somewhat challenging.

The current evidence for use of MitraClip is Class IIb in primary MR and Class IIa in secondary MR in patients who have prohibitive risks for surgery as per the 2021 European Society of Cardiology (ESC)/European Association for Cardio-Thoracic Surgery (EACTS) guidelines for management of valvular heart disease (44).

MitraClips have also been used in acute ischemic PMR in patients with significant co-morbidities precluding them from mitral valve surgery (45-53). Between two to three clips were used in these patients creating a single orifice with mitral valve area of around 2.1 cm2,with a mean trans-mitral gradient ranging from 2 to 6 mmHg. All patients were successfully weaned from mechanical and inotropic support with trivial to moderate MR on discharge with no mortality (45-53).

These case reports (45-53) highlight novel use of MitraClip in PMR with successful outcomes in a patient population that were destined for extremely high-risk surgery or conservative management. It is pertinent to mention the slightly elevated trans-mitral gradients likely related to reduction in the mitral valve area. MitraClip-related mitral stenosis is associated with worse long-term outcomes and survival (54).

Further follow-up will be required to determine the long-term sequalae of MitraClip (Abbott Vascular, Abbott Park, IL, USA) although it appears a viable option in the short-term in addressing patients with cardiogenic shock due to PMR with no mortality in the high-risk patient cohort.

In these critically ill patients, coronary angiography may be associated with ventricular arrythmias and hemodynamic compromise. Nevertheless, coronary angiography allows for identification of significant coronary artery disease that can be addressed during the same procedure and reduce the cross-clamp times allowing for a hybrid approach. Chevalier et al. showed a significant difference in survival in patients who underwent concomitant coronary artery bypass graft (CABG) along with mitral surgery. Similarly, a more recent case series by Massimi et al. also highlighted concomitant CABG being an independent predictor of survival (13,28). However, the benefit of concomitant revascularisation remains debatable.

In conclusion, in patients presenting with acute severe MR due to PMR, the optimal management strategy should be guided by dedicated mitral heart team discussions taking into consideration the clinical state of the patient, comorbidities, pathology of the valve and local technical expertise to ensure a successful patient outcome.