Bicuspid aortic valve (BAV) has an incidence of 0.5–2.0% in the general population (1-4). It has been found to be present in up to 25% of patients with infective endocarditis (IE) (5). Persons with BAV face a risk of contracting native valve IE up to 23 times higher compared to persons with tricuspid aortic valves (TAV) (6), indicating that valve morphology is an important contributor to the risk of IE. Overall, approximately 50% of the BAV population needs an aortic valve replacement during their lifetime, the vast majority for non-infective pathologies. Consequently, these patients also carry an increased risk of prosthetic valve endocarditis (7,8).

While surgery is required in approximately half of all native valve IE cases (9,10), this figure in patients with BAV is nearly 75%, suggesting a higher prevalence of invasive disease (3,11-14). Previous studies on endocarditis in BAV populations have seldom analyzed long-term outcomes for surgically treated patients independently and have focused exclusively on native valve IE patients (6,11,15-17). Thus, analysis is warranted to confirm that presentation and outcomes of prosthetic valve IE in BAV patients is the same as that of prosthetic valve IE in TAV patients.

We performed an observational, population-based cohort study approved by the Swedish Ethical Review Authority (Dnr: 2020-03294). The requirement for informed consent was waived. The study was reported according to the Strengthening the Reporting of Observational Studies in Epidemiology (STROBE) recommendations (18).

We included all patients who received surgery for active IE of the aortic valve between 2002–2020 at Karolinska University Hospital, Sweden. Our department is the only referral center for cardiac surgery in Stockholm County and serves approximately 25% of the Swedish population. Follow-up ended on August 17, 2020.

The study cohort was identified from the institutional surgical database and the local Cardiac Surgery Registry, a subset of the Swedish Web-System for Enhancement and Development of Evidence-based care in Heart disease Evaluated According to Recommended Therapies (SWEDEHEART) registry. SWEDEHEART is a comprehensive registry that tracks patient information for a variety of heart conditions, including cardiac surgery (19,20).

All consecutive patients with BAV or TAV, with and without previous aortic valve surgery, who had been allocated the International Classification of Diseases-10 code for IE (I33, I38 or I39) or who had undergone first-time surgery for active endocarditis, were identified. Patients were excluded if they did not meet the modified Duke criteria for definite IE (21), had no proof of endocardial involvement, did not have aortic valve involvement or had had previous surgery for IE. Information on baseline characteristics and valve morphology were sourced through patient medical records and the local SWEDEHEART registry. Patients with unknown valve morphology were excluded (n=17). A flowchart of the study population is provided in Figure S1. Infectious causes were obtained by reviewing patient medical records. Pathogens were confirmed through preoperative blood cultures or 16S rRNA gene variability analysis of valvular tissue.

Surgeons in Sweden follow international endocarditis guidelines to evaluate indications for and timing of endocarditis surgery (22). Patients in this study received a median sternotomy, cold blood cardioplegia and cardiopulmonary bypass. The aim of surgery was to achieve radical debridement of infected tissue and valve repair or reconstruction via implantation of a heart valve prosthesis. Homografts, xenografts, mechanical composite grafts and mechanical valve prostheses were used at the discretion of the surgeon, taking into account patient and surgical factors.

In this study, we included both native and prosthetic valve IE patients. Valve morphology refers to the native valve morphology of the patient. Exposure was first-time surgery for aortic valve endocarditis. The primary endpoint was all-cause mortality. The secondary endpoint was rate of reoperation, obtained by review of patient medical records. Reoperation was defined as valve or ascending aorta reoperation for any reason during follow-up, and indications for reoperation, including prosthetic valve IE, were recorded. Information on survival status and death date were obtained from the national Total Population Register, which is updated daily (23).

Categorical variables are presented as numbers and percentages and continuous variables as means and standard deviations. Patients contributed person-times from the date of surgery until the date of death, of reoperation or until the end of follow-up (August 17, 2020), whichever came first. Crude incidence rates and 95% confidence intervals (CI) were calculated. Survival curves were constructed using the Kaplan-Meier method. The χ2-test was used to analyze the association between valve type and early mortality, which was defined as death within 30 days following surgery. Univariable and multivariable Cox proportional hazard regression was used to calculate hazard ratios (HR) and 95% CI. To avoid overfitting the model, only age and sex were included in the multivariable model. All analyses were stratified by year of surgery. To account for the competing risk of death, flexible parametric models (24) were used to graphically illustrate and to calculate the cumulative incidence of reoperation. Data management and statistical analyses were performed using Stata version 16.1 (Stata Corp. LP., College Station, TX, USA). 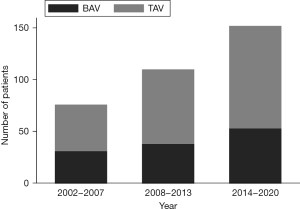 Baseline characteristics according to aortic valve morphology in 338 patients who underwent valve surgery for aortic valve endocarditis at Karolinska University Hospital, Sweden, between 2002–2020

Event rates and relative risks according to aortic valve morphology for all-cause mortality and reoperation in 338 patients who underwent aortic valve surgery for endocarditis at Karolinska University Hospital, Sweden, between 2002–2020

Cause of death and postoperative complications

The causes of death are shown in Table S3; postoperative complications according to valve morphology are listed in Table 4.

Postoperative complications according to valve morphology in 338 patients who underwent aortic valve surgery for endocarditis at Karolinska University Hospital, Sweden, between 2002–2020

Among prosthetic valve IE patients, there was likewise no difference in reoperation between the groups and the same held true for the overall study population. Event rates and relative risks according to valve morphology and prosthetic valve status are presented in Table 3.

Data was missing for the following baseline characteristics: body mass index (2.7%), EuroSCORE I (3.8%), left ventricular ejection fraction (35%) and glomerular filtration rate (1.2%). For all other data and for our primary outcome, data was complete.

Both BAV and endocarditis are relatively rare occurrences, which make them particularly challenging to study together. Previous research on survival among BAV patients with endocarditis have included both conservatively and surgically managed patients and focused exclusively on native valve IE. The current study provides new insights into long-term prognosis after aortic valve surgery for endocarditis in patients with BAV and includes data on native as well as prosthetic valve endocarditis.

In a prior study performed at two centers in France between 1991 and 2007, Tribouilloy et al. analyzed survival of patients with native valve IE in patients with BAV compared to patients with TAV (11). The study included both conservatively and surgically managed patients. Of 310 patients, 50 patients (16%) had BAV. There was a higher proportion of surgical treatment among BAV compared to TAV patients (72% vs. 61%, respectively), and like in our study, BAV patients were younger and healthier than TAV patients. Tribouilloy et al. found no significant difference in five-year survival between the groups (adjusted HR 0.75; 95% CI: 0.40–1.41; P=0.37). They did not present survival for the surgically managed patients separately.

While Tribouilloy et al. (11) and Becerra-Muñoz et al. (16) analyzed survival for conservatively and surgically treated BAV patients, our study adds the angle of the surgically treated population specifically, as well as information about reoperation and reinfection in patients with BAV. While the study by Tribouilloy et al., and Becerra-Muñoz et al. followed their cohorts for five- and one-year, respectively, our study confirms that long-term survival after surgery is high in the BAV population up to 14 years of follow-up. This is reassuring considering the severity of the perivalvular complications and the high percentage that require surgery in this patient population. It is also reassuring that we found no difference in the rate of reoperations between the groups, and that the rate of reinfection was low in patients with BAV. It is likely that the favorable prognosis is due to the younger age of the BAV patients and their healthier leadoff.

Prior studies found a higher degree of perivalvular abscess formation in BAV compared to TAV patients (11,15,16). This is in line with our findings, where perivalvular abscess was present in 40% of BAV patients with native valve IE and in 22% of TAV patients. In prosthetic valve IE patients, we found a high prevalence of perivalvular abscess formation among all patients, but no difference dependent on valve morphology (50% and 54% for BAV and TAV patients, respectively). Non-infectious complications of the aortic root and ascending aorta are well-known phenomena in BAV patients (25) Yet, the pathophysiological explanation for these complications remains unknown. It has been hypothesized that the increased risk of aortopathy in BAV patients is due to turbulent blood flow, resulting from the bicuspid valve, and/or genetic modifications of the aortic wall intima that are connected to a bicuspid valve morphology (1,2,13). It is possible that these theories may, in part, also explain why the BAV aortic root is more vulnerable to bacteria spreading and abscess formation. In patients with prosthetic valve IE, however, our data suggests that original valve morphology has no bearing on abscess formation.

The findings of this study confirm the important risk of IE in BAV patients, their risk of invasive disease and expand our understanding of long-term outcomes after aortic valve surgery for IE in BAV patients. Our data reaffirms that surgical treatment, when indicated, has excellent outcomes in BAV patients with native valve IE. Another interesting finding is the high prevalence of patients with BAV among patients who undergo surgery for IE combined with a high percentage of viridans streptococci infections. This finding may support the need for antibiotic prophylaxis in patients with BAV. The data on prosthetic valve IE likewise provides important information, suggesting that long-term outcomes are similar for BAV and TAV patients.

It is often a challenge to account for differences in age and other baseline characteristics. Even though we adjusted for age and sex in the analysis, it is possible that the large difference in age between the groups was not fully adjusted for. Also, due to the limited study population, we could not adjust for differences in comorbidities between the groups. We acknowledge that pre-operative factors and the presence of comorbidities may be of great importance to our endpoints. Furthermore, there are factors that we did not have information about, such as BAV subtype, persistent preoperative sepsis and antibiotic regimen. At our center, endocarditis patients are accepted for surgery through multidisciplinary conferences with the major hospitals in the Stockholm area, which all follow international guidelines on antibiotic treatment for endocarditis. Thus, we can assume that all patients will have received adequate antibiotic regimens for the relevant bacteria at the time of surgery. Specific strengths of our study are the relatively large study cohort and long follow-up. Furthermore, we included all patients who underwent surgery for IE at our center during the study period, which increases generalizability. Because we have access to both registry data and medical records, we have few missing data points, particularly regarding BAV status, and follow-up for our primary outcome was complete.

In patients with native valve endocarditis, BAV patients had higher survival than TAV patients, whereas in patients with prosthetic valve endocarditis, no difference was found between the groups. There was no difference in reoperation rates between BAV and TAV patients and rates of reoperation for reinfection were low. Our findings shed new light on the prognosis in BAV patients after aortic valve surgery for endocarditis and are reassuring for these patients. Still, it is notable that such a high portion of native valve IE patients requiring surgery have BAV; it suggests it may be time to consider antibiotic prophylaxis for this patient population. We call on further research with larger study cohorts to confirm our findings.