Mitral regurgitation (MR) is the most prevalent form of valvular heart disease in the developed world, increasing in incidence with age, affecting 10% of patients over the age of seventy-five (1). The phenotype of valvular disease in general has changed over preceding decades. The incidence of rheumatic heart disease has fallen in industrialized countries, with degenerative valvular disease being the leading mechanism of MR (1).

The mortality associated with severe MR is 50% at five-years and up to 90% of patients will have a hospitalization for heart failure within one year (2). There is an increasing trend toward earlier intervention in asymptomatic patients (3) and is now a guideline directed therapy (4). With an ageing and more comorbid population, patients with both early and late stages of MR stand to benefit from less invasive surgical approaches.

To date, most of the literature surrounding RMVr is limited to reports with only short-term follow-up. Therefore, this systematic review sought to provide a comprehensive analysis of the available literature to determine mid-term outcomes of RMVr.

The recommendations and guidelines set forth in the updated statement by the Preferred Reporting Items for Systematic Reviews and Meta-Analyses (PRISMA) were adhered to for the conduction of this systematic review and meta-analysis (12).

The literature search was conducted using five electronic databases including Ovid MEDLINE, EMBASE, Cochrane Central Register of Controlled Trials (CCRCT), Cochrane Database of Systematic Reviews (CDSR), and Database of Abstracts of Review of Effectiveness (DARE). All five databases were searched from inception to 23rd March, 2022. The search strategy included a combination of keywords and Medical Subject Headings (MeSH) including “Robotic” OR “Robotically-assisted” OR “Robo*” AND “Mitral valve” AND “Repair” OR “Annuloplasty”. Reference lists from previous systematic reviews, meta-analyses and included articles were also reviewed to ensure no additional publications were missed.

Study eligibility for inclusion in this systematic review and meta-analysis included those which reported mid-term outcomes for RMVr. Studies with cohorts that were either mixed without reporting separate outcomes for mitral valve repair/replacement, or different surgical approaches other than robotically assisted, were excluded. If centers/registries reported outcomes of overlapping patient series with either larger cohort size or extended follow-up, only the most complete, contemporary series was included for analysis. Abstracts, case reports, conference presentations, editorials and reviews were excluded, while included studies were limited to those in English, and only those involving human subjects. Title and abstract screening, followed by full-text review to determine included studies was performed independently by two reviewers (MLW and AE) with any discrepancies discussed until consensus reached.

Two independent reviewers (AE and BH) extracted data directly from publication texts, tables and figures. A third reviewer (MLW) independently reviewed and confirmed all extracted data. Differences of opinions between the two main reviewers (AE and BH) were resolved through means of discussion and consensus, including the primary investigator (MLW) where necessary. Attempts were made to clarify any insufficient or indistinct data from corresponding authors of included studies where required.

Meta-analysis of proportions or means was performed for categorical and continuous variables, as appropriate, to pool the patient characteristics and aggregate operative outcomes. To facilitate this statistical pooling, the methods described by Wan and colleagues were used to calculate means and standard deviations from the median (with range or interquartile range), where reported (13). A random effects model was chosen for the statistical analyses given variability would be present in terms of differing center/surgeon experience, different repair procedures, and different operative and management protocols across the included studies. Pooled proportions are presented as N (%) with 95% confidence intervals (CI) and pooled means are presented as a mean value (95% CI). For outcome data, heterogeneity amongst studies was assessed using the I2 statistic. Thresholds for I2 values were considered as low, moderate and high heterogeneity at 0–49%, 50–74% and ≥75%, respectively (14). Meta-analysis of proportions or means were performed using Stata (version 17.0, StataCorp, Texas, USA).

Study quality was assessed using the modified Canadian National Institute of Health Economics (CNIHE) assessment tool for case series (16) (Table S1). Studies were considered high quality if they addressed at least seventeen of the nineteen criteria outlined in the CNIHE tool, moderate quality if twelve to sixteen criteria were addressed, and of low quality if fewer than twelve criteria were addressed. Study quality was independently assessed by two investigators (MLW and BH) with any discrepancies clarified through the means of discussion until consensus was reached.

A total of 1,576 articles were identified in the electronic literature search (Figure 1). Eighty-three articles underwent full-text review after exclusion of duplicates and irrelevant studies identified through title/abstract screening. After full-text review, seventy-four articles were excluded due to not fulfilling the inclusion criteria, mainly for lacking mid-term outcome data. Moreover, several centers published multiple articles fulfilling inclusion criteria, with four studies being excluded due to overlapping cohorts (17-20). Another study which reported mid- to long-term results after endoscopic robotic mitral valve surgery in 1,257 patients by Murphy and colleagues was excluded as 7% of patients underwent mitral valve replacement (not repair) and therefore did not meet inclusion criteria. Therefore, nine studies remained after fulfilling the pre-determined inclusion criteria (21-29), with a total of 3,300 patients undergoing RMVr. 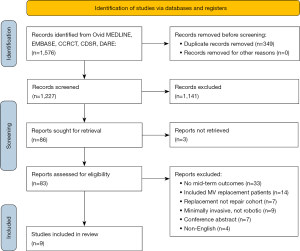 Eight of the nine included studies were retrospective observational case series or cohort studies (21,22,24-29), with only one study being prospective in nature (23) (Table 1). One of the included studies was a comparative cohort study comparing RMVr to conventional sternotomy (24), therefore, only data regarding the robotic group was included in the present study. Included studies had varying patient cohort size from 110 to 1,036 patients. Pooled clinical follow-up across the included studies was 54.1 months (95% CI: 49.7–57.8 months) and pooled echocardiographic follow-up was 35.6 months (95% CI: 31.2–39.7 months). Study quality was consistent across the included studies with all nine deemed of moderate quality scoring between fourteen to sixteen points on the CNIHE assessment tool for case series (Table S2). Deficiencies in study quality tended to be due to the retrospective nature, single center study design, and poor reporting of conflicts of interest.

The operative technique for robotic access for the RMVr across the included studies varied from a 2- to 8-centimeter right incision in either the fourth or fifth intercostal space along with a varying number of other robotic access ports (Table S4). Eight of the nine included studies used the da Vinci® Surgical System (Intuitive Surgical Inc., Sunnyvale, California, USA) (21-27,29), with the final study not reporting the robotic surgical platform used (28). The majority of the included studies utilized femoral arterial cannulation, transthoracic aortic cross clamping and antegrade cardioplegia delivery. Pooled cross clamp and cardiopulmonary bypass (CPB) times were 75.3 minutes and 116.7 minutes, respectively. The pooled weighted rate of successful RMVr was 99.8% (95% CI: 99.4–100; I2=59%). In total, there were twenty-four conversions to sternotomy/thoracotomy across the nine included studies with a weighted pooled conversion rate of 0.6% (95% CI: 0.01–1.8; I2=87%). Majority of these conversions (fourteen) came from one study, which included the learning phase of RMVr and reported a low threshold for conversion to maximize the safety of the procedure in the learning period (24). Reasons for conversion in this study included problems with endoclamp positioning/cardioplegia delivery, suboptimal mitral valve repair, bleeding, pleural adhesions, venous return issues and robotic malfunction. Further information on the procedural details and concomitant surgical procedures can be found in Table S2.

RMVr has been shown to be a safe procedure with acceptable outcomes by a number of dedicated, high-volume centers worldwide (17,30,31). Robotic mitral valve surgery has also been demonstrated to have comparable short-term outcomes to the gold standard conventional sternotomy and other minimally invasive surgical approaches to the mitral valve (9-11,32). However, worldwide uptake of RMVr has been slow with the main concerns being related to the steep learning curve/operative complexity and higher associated costs (33). Several observational, single center studies have shown promising short-term outcomes, however, mid- to long-term outcomes are scarce. Therefore, the aim of this systematic review and meta-analysis was to provide a comprehensive review of all studies in the existing literature reporting mid-term outcomes after RMVr.

Supporters of robotic valve surgery promote that all primary MV disease can be repaired robotically with the advantages of reduced ICU/hospital stay, fewer RBC transfusion, improved cosmesis and improved early quality of life post-operatively (8,10). It has also been shown that more complex MV pathologies can be repaired robotically without affecting outcomes (6). In the present study, rate of successful RMVr was 99.8%, however, definitions of what defined a successful repair in the included studies was rarely reported.

Advantages of robotic surgery have been reported to include shorter ICU and hospital length of stay, shorter periods of ventilation, less RBC transfusion and lower rates of POAF (10). In the present study, rates of post-operative complications were low with 24.2% of patients experiencing POAF and only 1.0% experiencing CVA post RMVr. Reoperation for bleeding was low at 2.2%, which is similar to rates reported in the literature across both robotic and conventional sternotomy mitral valve surgery (32,34-36). Pooled mean ICU length of stay and hospital stay in the current study was 22.4 hours and 5.2 days, respectively. A study by Coyan and colleagues assessing 182 propensity score matched patients who underwent robotic or conventional sternotomy mitral valve surgery reported significantly longer ICU and hospital length of stay (ICU median 27.0 vs. 31.0 hours and hospital median 5 vs. 7 days, respectively) in the conventional sternotomy cohort.

Mid- to long-term survival after robotic cardiac surgery appears to be satisfactory and comparable to other surgical approaches to the mitral valve. Rates of overall survival in the present study were 97.4% at five-year and 92.3% at ten-year. These figures are comparable to those reported by Dreyfus and colleagues who reported overall survival rates of 93.6% at five-year and 86.7% at ten-year after mitral valve repair (37). Lange and colleagues who performed a propensity matched analysis of ninety-seven paired patients who underwent either right mini-thoracotomy or full sternotomy mitral valve repair reported five-year overall survival rates of 93.5% and 87.4%, respectively.

There are several important limitations to consider when interpreting the results from the present study. The observational nature of all included studies presents an inherent source of bias in the present study. Most studies also lacked clear definitions to what was deemed a successful mitral valve repair (i.e., none/trace/mild MR post repair). Another important consideration is the varying repair techniques and concomitant procedures across the included studies. Finally, significant heterogeneity was detected in the analyses of reoperation for bleeding, ICU and hospital LOS. This may reflect the limited data, differing operator experience or difference between specific unit post-operative management protocols across the included studies.

In summary, RMVr provides a safe and effective treatment modality for patients with MV disease with low rates of early mortality. It can be performed with low complication rates in high volume, experienced centers. RMVr can be performed with good mid-term results, including satisfactory rates of overall survival and freedom from MV reoperation. Rates of freedom from moderate or worse MR recurrence are acceptable, especially given the steep learning curve required for robotic cardiac surgery. Further high quality prospective multicenter registry data and randomized control trials are required to evaluate and compare the different surgical approaches for mitral valve repair.

Conflicts of Interest: Dr. SG provides consultation for Edwards Lifesciences, Johnson & Johnson, and Intuitive Surgical. The other authors have no conflicts of interest to declare.