Aneurismal dilatation of the remaining thoracic aorta after ascending aortic interposition grafting for type A aortic dissection is not uncommon. Owing to the complexity of each individual patient’s condition and anatomical consideration, there is no unifying management strategy to treat such complicated conditions. In one complex case at our center, we adopted a total arch replacement and elephant trunk procedure with SiennaTM collared graft (Vascutek, Inchinnan, UK) followed by a staged thoracic endovascular aortic repair (TEVAR).

To illustrate our technique for performing re-operative total arch replacement and elephant trunk procedure, we present a video (Video 1) of such an approach in a 56-year-old man with an extensive aortic arch and descending thoracic aortic dissecting aneurysm (Figure 1). The patient has a history of hypertension, smoking and ascending aortic dissection with aortic interposition grafting performed in 2006. He was initially seen at our clinic but then defaulted on follow-up. He re-presented 6 years later with chest pain. His CT scan showed fusiform dilatation of the whole aorta with a dissection flap evident extending from the proximal aortic arch down to the aortic bifurcation and into the common iliac artery. The short axis diameters were 5 cm at the proximal aortic arch, 7.8 cm at the distal aortic arch, 8.9 cm at the descending thoracic aorta and 4 cm at the celiac level in the abdominal aorta. 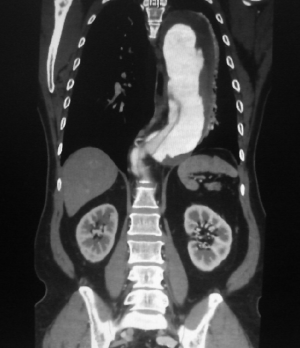 At the aortic arch region the origin of the brachiocephalic artery and the left subclavian artery were all involved. The intimal flap also extended into the right subclavian artery and right common carotid. The left common carotid appeared spared and supplied by the true lumen. The true lumen was significantly compressed at the aortic arch and all the way down the descending thoracic and abdominal aorta. There was presence of significant associated intramural haematoma but no contrast extravagation. The small mesenteric artery, left renal artery and left common iliac artery were supplied by the true lumen. The celiac trunk and 2 right renal arteries were supplied by the false lumen while the right common iliac was co-supplied by both lumens.

Our approach in this case was to replace his arch and leave an elephant trunk to provide a landing zone for subsequent TEVAR in order to completely treat his aortic pathology.

Under general anesthesia, the non-dissected femoral vessels were exposed and prepared. Re-sternotomy was performed and adhesion from previous operation was carefully taken down. After partial mobilization of the cardiac structures the patient was put on cardiopulmonary bypass via femoral arterial and venous cannulation following systemic administration of 3 mg/kg heparin. The dissection was completed and the left ventricle was vented through the right superior pulmonary vein. Systemic cooling was commenced and circulatory arrest was initiated at 22 °C. Upon circulatory arrest, the aortic arch and the previous ascending aortic graft was incised. Direct coronary cardioplegia was given to the left and right coronary ostia in view of persistent ventricular fibrillation despite cooling. Antegrade cerebral perfusion was achieved via selective cannulation to the right brachiocephalic and left common carotid artery, keeping flow rates at 10-15 mL/kg/min and perfusion pressure at 50-60 mmHg.

The SiennaTM collared graft is extremely useful in the case of significant mismatch between ascending and descending aortic size, with the collared design allowing anastomosis to a larger descending thoracic aorta in cases requiring an elephant trunk procedure (1). The graft also has radiopaque markers to facilitate second-stage endovascular repair and 4 side-arms which allow for complete replacement of all three arch vessels and establishment of early antegrade perfusion. In our case, a 30 mm SiennaTM collared graft was chosen after sizing with reference to the ascending aortic graft and also with consideration of the subsequent landing zone diameter for TEVAR. The distal limb of the SiennaTM collared graft was cut to leave a 5-6 cm elephant trunk. In this patient, the proximal descending aorta beyond the subclavian artery was massively dilated and extremely thin-walled, so we elected to perform the distal reconstruction in a more suitable area between the left subclavian and left common carotid artery.

In view of complex distal visceral organ perfusion we ensured perfusion of both the true and false lumen by fenestrating the dissection flap between the true and false lumen of the descending thoracic aorta for at least 8 cm in length. The collar of the SiennaTM collared graft was trimmed to match the size of the descending thoracic aorta and anastomosis was performed with continuous 3-0 polypropylene sutures. Before this, we orientated the graft in anticipation of re-implantation of the head and neck vessels and used two 4-0 prolene tacking sutures to ensure stable orientation. Upon completion of the distal anastomosis, each side branch of the SiennaTM collared graft was snared at their origin and the proximal part of the graft was clamped well away from the arch. After de-airing using retrograde perfusion, antegrade systemic perfusion was started via one of the side branches of the graft and systemic re-warming was commenced to 28 °C. Anastomosis to individual head and neck vessel was performed whilst continuing selective antegrade cerebral perfusion. Upon completion of each anastomosis, the perfusion cannulae were removed and the graft de-aired. The snare was then released on the graft side-arm. This is a modification of the sequential clamping technique which allows disruption to perfusion to be kept to a minimum. The clamp on the graft was then moved more distally and the proximal part of the Sienna PlexusTM collared graft was trimmed and anastomosed with a remnant of the previous ascending aortic graft using 3-0 polypropylene sutures. The patient was subsequently weaned from cardiopulmonary bypass with no problems. The patient was discharged home after 10 days hospital stay.

He re-presented 2 weeks later with more chest pain and a CT scan which showed the descending false lumen may have already increased in size and hence underwent urgent TEVAR as a completion procedure. 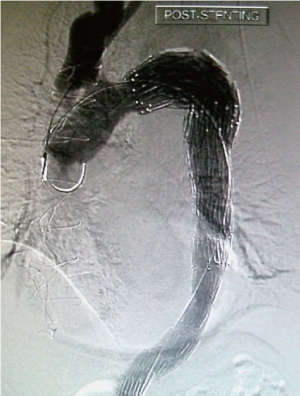 The patient recovered well from the operation without any neurological and visceral organ dysfunction. He was discharged on the seventh day after the operation. Follow-up CT scan showed satisfactory stent expansion and thrombosis of the false lumen.

Although re-operative total arch replacement and elephant trunk procedure and subsequent TEVAR remains a challenging procedure, we believe excellent surgical outcomes can be achieved with carefully planned operative strategy. It is a particularly useful strategy when clinical events require the second stage to be performed very soon after the initial elephant trunk procedure whereas a conventional open procedure might require additional periods of circulatory arrest.