The standard surgical technique for patients with extensive pathology of the thoracic aorta is still the conventional elephant trunk technique, developed by Borst in 1983 (1). However, this procedure is associated with increased operative medium term mortality, and also with a high incidence of neurological complications (2). In recent years many new technological solutions based on endovascular methods have been introduced into clinical practice, one of them being a hybrid procedure, the frozen elephant trunk technique (FET) (3).

The current study shows our 7-year institutional experience of using the FET technique for the treatment of patients with extensive thoracic aortic disease. The objectives of this study were (1) to evaluate clinical characteristics, and early, and mid-term results, and (2) to determine predictors of clinical and neurological outcome, particularly, spinal cord injury after aortic arch surgery using FET.

A total of 51 consecutive patients underwent total aortic arch surgery with FET implantation between January 2006 and August 2013 and were included in our analysis. Data were prospectively collected in a database, and retrospective review was approved by the local Ethics Committee. Individual patient consent was waived.

Patients were followed-up annually with a mailed questionnaire or, when needed, by contacting the referring cardiologist or general practitioner. Follow-up was 100% complete.

The FET technique has been performed in our hospital since 2006. In all patients the E-vita hybrid open stent-graft (Jotec, Hechingen, Germany) was used (Figure 1). The surgical technique and indication were as previously described (4). 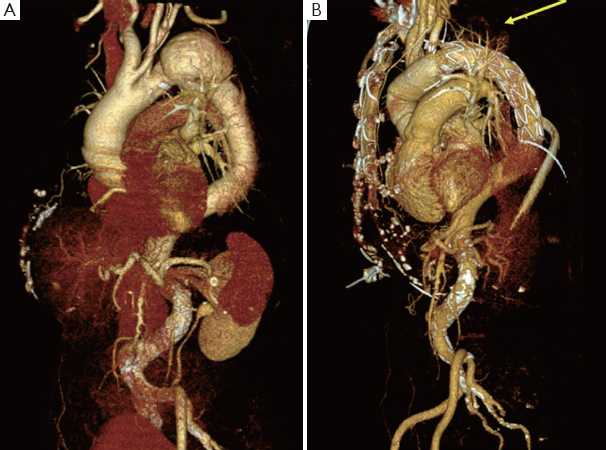 All statistical analyses were performed using SPSS 17.0 (Chicago, IL). Categorical variables were compared using the Chi-square test or Fisher’s exact test. Independent continuous variables were compared by unpaired Student’s t-test for comparison of normally distributed data between two groups or Kruskal-Wallis test for the comparison of more than two groups as appropriate. Continuous variables are expressed as mean ± SD, and categorical data as proportions throughout the manuscript.

A total of 51 consecutive patients underwent total replacement of the aortic arch using the FET technique during the study period. The majority (62.7%) suffered from degenerative aortic aneurysm. Acute Type A and Type B aortic dissection was the indication for surgery in 15.7% and 13.7% of patients, respectively (Table 1). 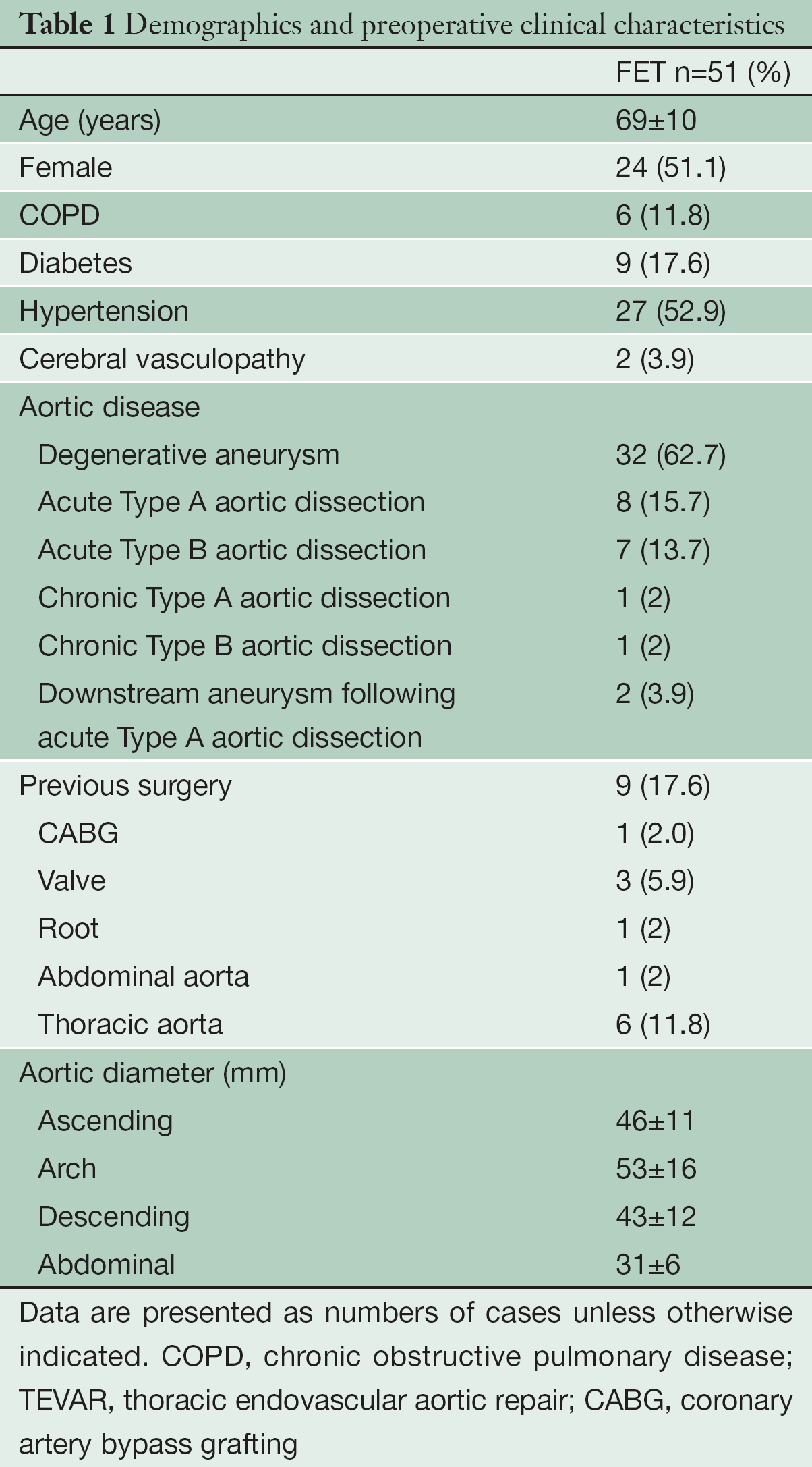 During follow-up TEVAR was performed in 8 patients. The estimate mean freedom from endovascular intervention was 4.2±0.4 years. The unadjusted 1- and 5-year freedom from TEVAR was (84.9±5.9)%, and (69.2±11.2)%, respectively (Figure 2). One patient underwent re-operative thoracoabdominal aortic surgery 5.5 years after initial surgery due to progression of extensive thoracoabdominal disease. 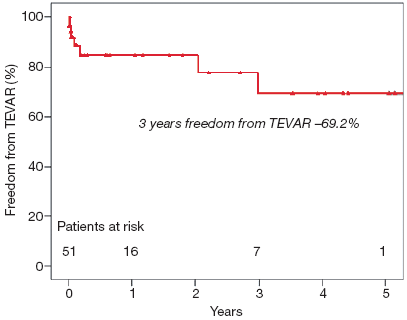 The current study summarizes our 7-year institutional experience in aortic repair with “FET” for patients with extensive aortic pathology, a technique, which was introduced into clinical practice at our institution in 2006.

The 30-day mortality of 7.8%, observed in our study, is comparable to other case series reported in the literature. The in-hospital mortality, reported in 2011 by the International E-vita Open Registry, is 15% (5). The lower mortality rate in the present study must be interpreted with caution, because a lower number of patients suffered from acute type A aortic dissection. This disease has previously been identified as an independent predictor of 30-day mortality in patients undergoing aortic arch surgery (2,6).

The neurological status of patients after extended aortic arch surgery has an important impact on postoperative outcome. The most devastating complications associated with reduced quality of life and long-term survival in these patients are PND and spinal cord injury (6-8).

The incidence of PND in patients undergoing aortic arch surgery has been reported to range between 1.1% and 9.8% (8,16,17). Age, acute type A aortic dissection (2), urgent status (7,16), renal insufficiency (16), operation time (16) and, prolonged circulatory arrest (2,16) were factors that influenced the occurrence of PND after surgery. PND was observed in 11.8% of our patients and was nearly twice as high among patients who presented with acute type A aortic dissection.

In conclusion, the FET technique can be performed with a relatively low mortality in patients with extensive pathology of the thoracic aorta. However, this procedure is associated with a significantly increased incidence of postoperative permanent paraplegia due to ischemic spinal cord injury. The independent predictor of paraplegia is the combination of prolonged circulatory arrest times (≥45 minutes) with mild hypothermia (≥28 °C). The FET procedure should therefore be performed using deep hypothermia, particularly in patients with prolonged aortic arch surgery, in order to prevent complications due to ischaemic spinal cord injury.