Despite increased understanding of the pathophysiology, improved anesthetic, myocardial and cerebral protection techniques, and advances in postoperative care of acute Stanford type A aortic dissection (AAAD) in the past two decades, AAAD remains one of the most lethal diseases in cardiovascular surgery and may arguably be increasing in incidence (1). Evidence for improving outcomes is modest (2) and mortality and neurological complication rates after surgical repair have been estimated to range from 15-30% (3,4). Although the frozen elephant trunk technique has greatly improved the clinical outcomes of AAADs with involvement of the arch vessels and proximal descending aorta, controversy regarding the validity of using this more aggressive approach in such critically ill patients still remains. The main counter-argument is that the higher technical complexity, longer operative time, and extended hypothermic circulatory arrest time may increase the mortality and morbidity, compared with standard repair at the distal ascending aorta level.

The Sun’s procedure is a surgical approach proposed by Dr. Li-Zhong Sun that integrates total arch replacement using a tetrafurcated graft with implantation of a special stented graft in the descending aorta (5,6). As of March 2013, our team has performed over 1,000 cases of Sun’s procedure with favorable early and late outcomes (6-12), among which there are 398 consecutive patients with AAAD. In this study, we seek to analyze the early outcomes of the Sun’s procedure in order to identify possible preoperative and intraoperative risk factors influencing the early mortality following emergent repair of AAADs, and attempt to provide evidence of the validity of the frozen elephant trunk procedure.

The Ethics Committees of Fu Wai Hospital and Cardio-vascular Institute and Beijing Anzhen Hospital, Capital Medical University approved this retrospective study and waived the need for individual patient consent for this study.

Between April 2003 and March 2012, our team performed the Sun’s procedure in 398 patients with AAAD in Fu Wai Hospital (from April 2003 to December 2008; n=157) and Beijing Anzhen Hospital (from January 2009 to March 2012; n=241). There were 328 males and 70 females, with a mean age of 46±11 years (range, 17-78 years). The Sun’s procedure was selected for a patient with AAAD with (I) the primary entry located in the arch and descending aorta; or (IV) complicated with Marfan syndrome. Preoperatively, all patients were evaluated by computed tomographic angiography and echocardiography to confirm their diagnosis and assess the extent of dissection, diameters of aortic segments, evidence of malperfusion and sites of arterial cannulation. Table 1 lists 16 demographic and preoperative characteristics of the patients. 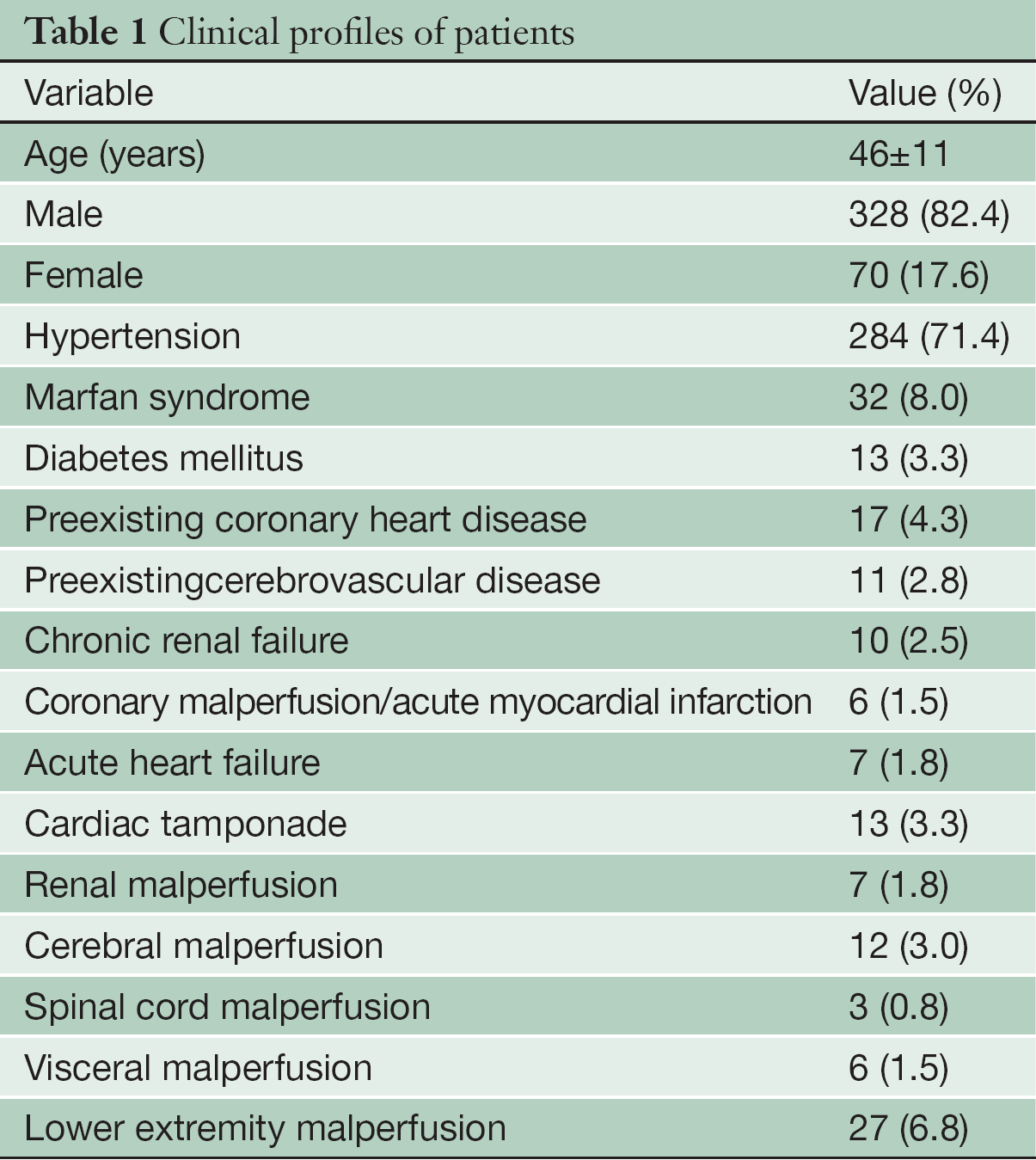 The Sun’s procedure refers to total arch replacement using a tetrafurcate vascular graft in combination with implantation of a special stented graft into the descending aorta. The technical details have been described in detail elsewhere (6-11) and in this issue of the Annals of Cardiothoracic Surgery (12). Briefly, it is performed with right axillary artery cannulation for cardiopulmonary bypass and selective antegrade cerebral perfusion, under moderate hypothermic circulatory arrest at 25 °C. This procedure involves implantation of the stented graft into the descending aorta, total arch replacement with a 4-branched vascular graft, a special sequence for aortic reconstruction (i.e., proximal descending aorta, then left carotid artery, ascending aorta, left subclavian artery, and finally innominate artery), and early rewarming and reperfusion after distal anastomosis to minimize cerebral and coronary ischemia. Selective cerebral perfusion time refers to the interval between the initiation of hypothermic circulatory arrest and completion of left carotid anastomosis, which is longer than the time of deep hypothermic circulatory arrest. In this period, lower body perfusion is arrested to implant the stented graft and suture the proximal descending anastomosis.

Patient demographic, preoperative, intraoperative, early morbidity and mortality data were collected and recorded prospectively. In this study, early mortality is defined as the percentage of patients undergoing the Sun’s procedure who die, including both (I) all deaths occurring during the same hospitalization after the primary surgery, even if after 30 days; and (II) deaths occurring after discharge from the hospital, but within 30 days of the procedure. Early morbidity is defined as any adverse events occurring within 30 days following the primary surgery. 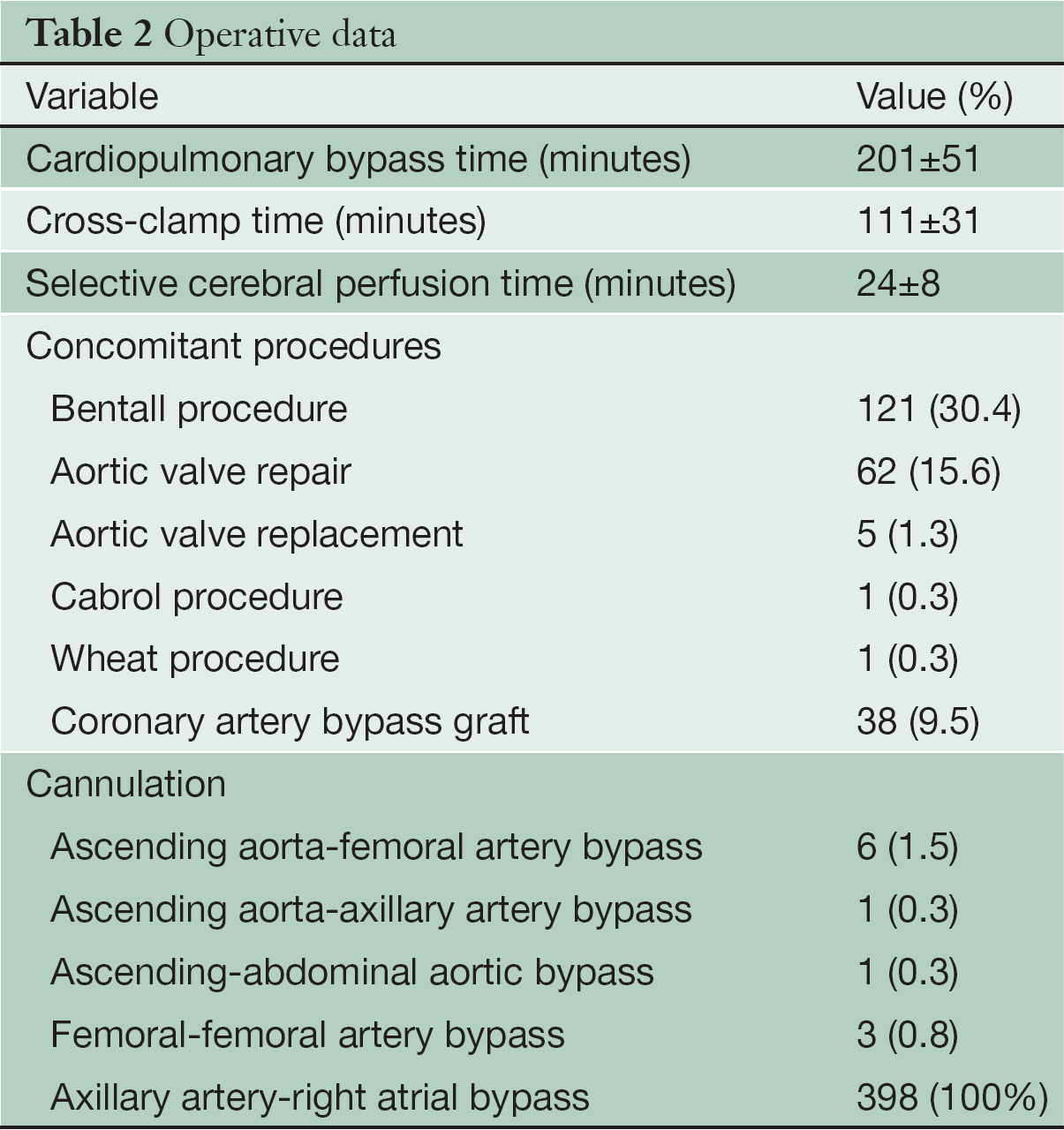 Table 3 describes the 67 cases of early morbidities in detail (16.3%, 65/398), including renal failure in 17 (4.3%), permanent neurologic deficit and spinal cord injury, each in 10 (2.5%), low cardiac output and left recurrent nerve injury, each in 4 (1.0%), and limb ischemia in 2 (0.5%). Spinal cord injury included paraplegia in 7 patients (1.8%) and paraparesis in 3 (0.7%). Three patients complicated with permanent neurologic deficit were transferred for further neurologic treatment after their cardiopulmonary function stabilized. 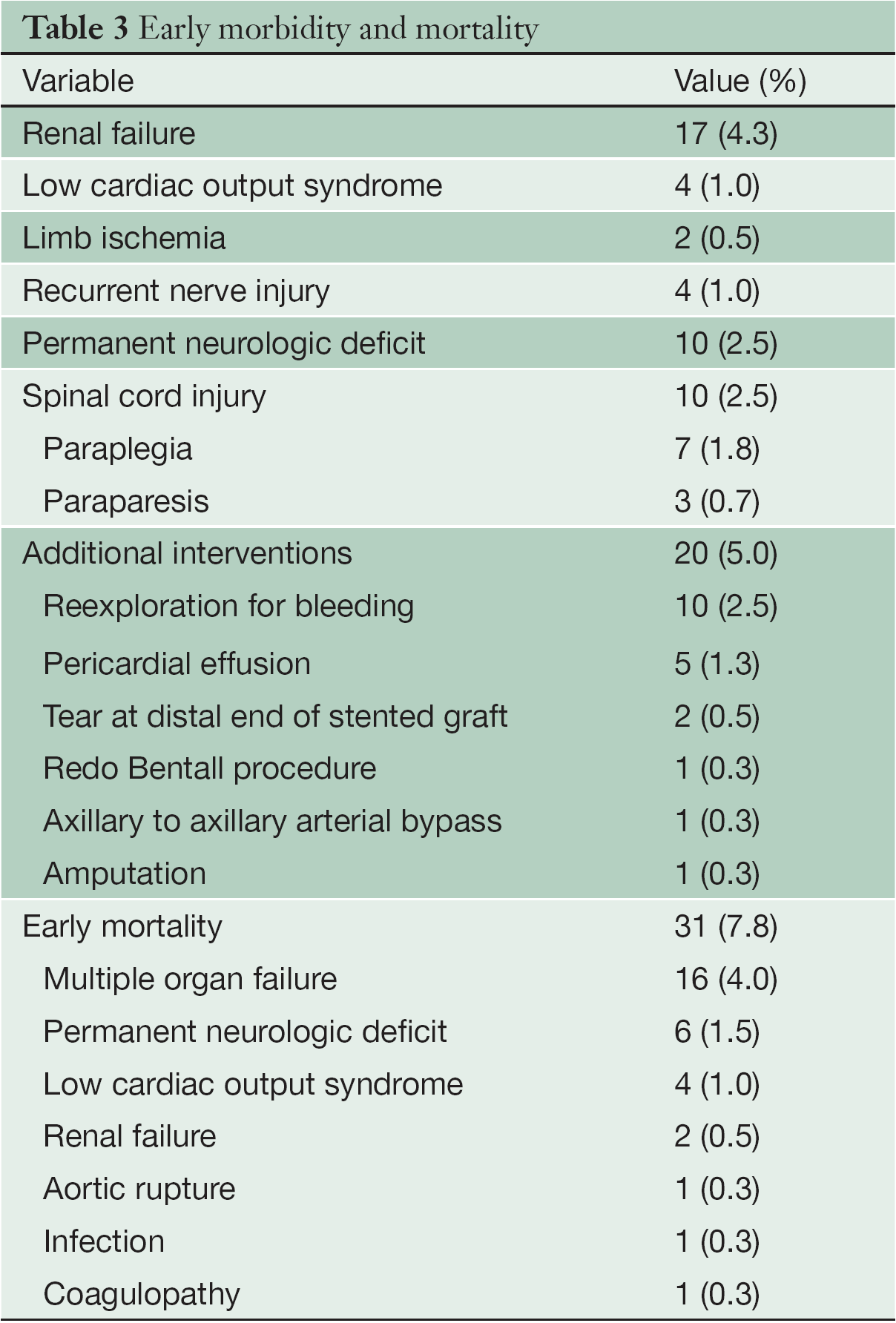 Additional surgical or endovascular procedures were required in 20 cases (5.0%), including reexploration for bleeding in 10 (2.5%), pericardial window for effusion in 5 (1.3%), endovascular stent grafting in 2 cases for large intimal tear at the distal end of the stented graft, redo Bentall procedure for persistent aortic root bleeding, axillary to axillary arterial bypass for left arm ischemia, and amputation for left leg thrombotic necrosis, each in 1 case.

Analysis of potential risk factors for early mortality and morbidity

Despite improvements in the surgical outcome of AAAD over the past two decades, postoperative mortality remains high. Although the frozen elephant trunk techniques have been shown to promote false lumen thrombosis, reduce distal patent false lumen rates, eliminate secondary tears in the arch and re-entry tears in the proximal descending aorta, ameliorate distal aortic malperfusion and decrease late aneurysm formation (8,13,14), there is still debate over its technical complexity, longer time of cerebral perfusion and hypothermic circulatory arrest, which might increase the risks of mortality and neurologic events (13,14). In addition, the indications of frozen elephant trunk beyond AAAD with descending aortic rupture (15) and retrograde dissection (9) are still controversial (16-18).

The objectives of this study are to analyze the early mortality and morbidity of the Sun’s procedure, (i.e., total arch replacement using 4-branched graft with implantation of a special stented graft in the descending aorta), in 398 consecutive patients with AAAD during a 10-year period, and to identify the risk factors predictive of early mortality and morbidity. Since large, prospective, randomized controlled clinical trials are ethically and practically infeasible, comparison of the results of Sun’s procedure with those of historical and contemporary series may be helpful in the choice of more aggressive frozen elephant trunk procedures versus the conservative standard repair for patients with AAAD.

Compared to operative mortality rates as high as 11-36% reported in the 1990s (19,20), the Sun’s procedure carries a relatively lower early mortality rate of 7.8% in 398 AAAD patients. Specifically, mortality rate in this series is also lower than that in most contemporary series of frozen elephant trunk procedure for AAAD patients, which ranged from 9.1-27.7% (21-24). This, in part, may be ascribed to the unique stented graft used in the Sun’s procedure (12) and an algorithm dictating the surgical strategies based on our sub-categorization of the Stanford system that divides type A dissections into subtypes according to the aortic root diameter, degree of aortic insufficiency, competency of the sinotubular junction, and the dissection process in the arch and beyond (10).

Another possible reason for the lower observed early mortality is the younger age of our patients (46±11 years). In contrast, data from the International Registry of Aortic Dissection (IRAD) suggest that one-third of patients with AAAD are over 70 years of age (25), and 640 of 2,137 patients (29.9%) in the German Registry for Acute Aortic Dissection Type A (GERAADA) are ≥70 years of age (26). Nevertheless, younger age seems to be a relative indication of the frozen elephant trunk procedure, as evidenced by the fact that the mean age of patients in recent cohorts ranged from 45.4-66.8 years, irrespective of geographic differences (21-24,27,28). To investigate the impact of age on early mortality of Sun’s procedure, we divided patients into 4 age groups and found a higher mortality rate in the group older than 60 years (12.9% versus 6.9%, 6.7%, 8.8% in other groups), but it did not reach statistical difference (Table 4). Multivariate analysis also failed to identify age as a predictor of early mortality in this study. Although this finding appears to be somewhat paradoxical and contrary to the common idea that old age is a risk factor, it is echoed in a report of 487 patients by Chiappini and associates (3). In a group of 355 AAAD patients, Kimura et al. (29) found that the early and late surgical outcomes were not better in 30 patients aged ≤45 years with a high risk of reoperation, which is similar to results of the IRAD study (30). Moreover, ascending aortic/hemiarch replacement was performed in at least 80% of Kimura’s patients (29), which implies, conversely, that the more aggressive frozen elephant trunk procedure should be chosen in younger patients.

While the IRAD study demonstrated predictors of early mortality after surgical repair of AAAD to be pulse deficit, aortic rupture with preoperative hypotension, shock or cardiac tamponade, and signs of myocardial ischemia (32), we identified 5 risk factors for early mortality after the Sun’s procedure: preexisting cerebrovascular disease, acute heart failure secondary to aortic insufficiency or coronary malperfusion, spinal cord malperfusion, visceral malperfusion and cardiopulmonary bypass time >190 minutes. Renal malperfusion was also recognized as a risk factor with a composite end point of early mortality and morbidity. While prolonged cardiopulmonary bypass time is a well-defined risk factor for almost all open-heart procedures, 4 of these 6 risk factors belong to malperfusion syndrome, which has an incidence of 16-33% preoperatively (18). Malperfusion may result in myocardial, cerebral, spinal cord, extremity, renal and visceral ischemia and clinically apparent malperfusion of any type increases mortality risk (33). Pacini and associates reported a group of 502 patients and found that mesenteric malperfusion, coronary malperfusion and shock were risk factors for early mortality (34). In a group of 516 AAAD patients with coronary artery dissection, Imoto and colleagues demonstrated the mortality was 7.4% in those without ischemia versus 33% for those with ischemia (35). Our results corroborate other studies and suggest that immediate surgical repair to restore perfusion is vital to achieving a better outcome.

In conclusion, the Sun’s procedure has generated a relatively lower rate of early mortality and neurologic dysfunction in 398 patients with AAAD, compared to most contemporary and historical series. Patients with preexisting cerebrovascular disease, acute heart failure secondary to aortic sufficiency or coronary malperfusion, spinal cord malperfusion, visceral malperfusion and longer cardiopulmonary bypass time (>190 minutes) are at a higher risk of early mortality.