The frozen elephant trunk (FET) procedure is a hybrid therapy available for the treatment of patients with extensive diseases of the thoracic aorta. This approach combines surgical graft replacement of the aortic arch with stent-grafting of the descending thoracic aorta using a covered stent. Different prostheses have been developed for carrying out this surgery, including the commercially available E-vita open plus prosthesis (Jotec Inc., Hechingen, Germany). This hybrid prosthesis is composed of a distal nitinol-covered stent-graft sutured to a proximal woven polyester tube graft (Figure 1). During lower body circulatory arrest and antegrade selective cerebral perfusion (ASCP), the E-vita open plus prosthesis is antegradely deployed into the descending thoracic aorta through the open aorta, while the proximal graft segment is sutured to the distal aortic stump and used to replace the aortic arch. 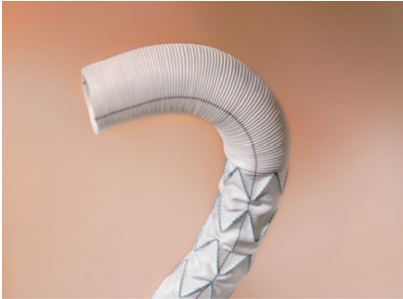 As shown in the video entitled “FET surgery using the E-vita open plus prosthesis”, this manuscript describes our surgical FET approach with ASCP in detail. The video illustrates the surgical treatment of a 75-year-old man who had previously undergone a Bentall procedure and myocardial revascularization for a DeBakey type 1 acute aortic dissection. The patient was admitted to our hospital 4 years later, at which time computer tomography (CT) angiogram showed a pseudo aneurysm at the distal anastomosis measuring 63 mm, and a residual DeBakey type 1 chronic dissection with severe false lumen dilatation at the proximal descending thoracic aorta (61 mm) (Figure 2). 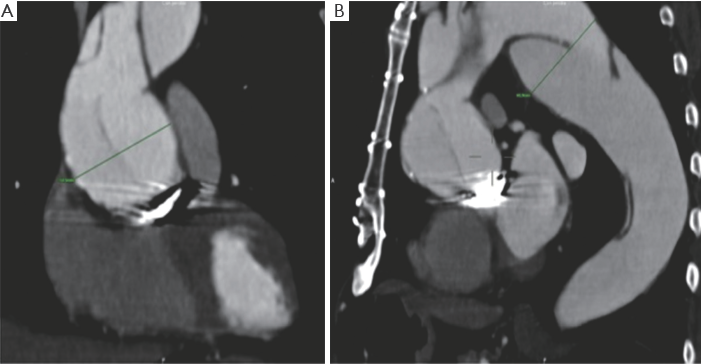 A right sub-clavicular incision was performed to isolate the axillary artery.

The axillary artery and the innominate artery represent our first-choice sites for arterial cannulation when ASCP is used. In fact, these two sites allow ASCP to be instituted without interrupting the perfusion of the brain, and require only one cannula (instead of two) in the left common carotid artery to obtain bilateral brain perfusion (1,2). The axillary artery is preferred in patients for whom arterial access is required before re-sternotomy. For cannulation, a side-arm graft is used if the axillary or innominate arteries present with a small diameter.

The CPB tubing was adequately prepared on the operative table. In particular, a Y connector was used to duplicate the arterial line, with one line going to the right axillary artery for CPB institution and right brain perfusion during lower body circulatory arrest, and the other to be opened for lower body perfusion after completion of the distal aortic anastomosis.

Re-sternotomy was performed using an oscillating saw. The left pleural space was opened and extensive isolation of the ligated and divided innominate vein from the aortic arch, arch vessels and heart was carried out.

After systemic heparinization, a guidewire was introduced from the right femoral artery into the true lumen up to the ascending aorta under transesophageal echocardiographic control. A preoperative CT angiogram was used to identify the femoral artery with the best route to the aortic true lumen.

The right axillary artery and the right auricle were cannulated, and CPB was established. The right superior pulmonary vein was cannulated for left ventricle venting, and subsequently cooling was initiated with a target nasopharyngeal temperature of 26 °C.

Since 1996, ASCP has represented our method of brain protection during arch surgery. A multicenter study (including our institution) involving 413 patients undergoing open arch procedures demonstrated that an ASCP time of up to 90 minutes was not associated with increased risk of hospital death, stroke or coma and transient neurologic dysfunction (3). In a comparative study assessing outcomes after hemiarch replacement (n=289) with ASCP and moderate hypothermia vs. deep hypothermic circulatory arrest (DHCA), improved postoperative recovery of respiratory and renal function of was observed in the ASCP group, but no differences in neurologic outcomes were found between ASCP and DHCA (4). In a recent study comparing ASCP outcomes using deep vs. moderate hypothermia, no differences were found between the two approaches in terms of mortality, neurologic (including spinal) and other systemic complications (5). In our opinion, all these findings reflect the clinical value of ASCP, which has the main advantages of: (I) an increased period of safe brain protection (vs. DHCA), extremely valuable during complex and time consuming arch reconstructions; (II) reduced CPB duration (vs. DHCA) to cool down and rewarm the patient; (III) the avoidance of all DHCA-related detrimental systemic effects and (IV) the neurologic safety of moderate hypothermia.

Based on anatomical and clinical studies showing: (I) the circle of Willis is often incomplete with anterior and posterior communicating arteries missing in 22% and 44% of cases, respectively (6), and (II) improved neurologic outcomes of bilateral vs. unilateral ASCP (7), we always adopt bilateral ASCP during aortic arch procedures. In the majority of cases, we establish ASCP by cannulation of the right axillary or innominate artery for right brain perfusion, and by means of separate endoluminal cannulation of the left common carotid artery for left brain perfusion. Recently, in patients with a large left subclavian artery and/or a dominant left vertebral system, we have used “total” brain perfusion with additional endoluminal cannulation of the left subclavian artery to improve left vertebral and proximal spinal cord perfusion. According to Professor Kazui’s indications, we use a flow rate of 10 mL/kg/min adjusted to maintain right radial artery pressure of between 40 and 70 mmHg (8). Our target nasopharyngeal temperature for arrest is currently 26 °C with the exception of specific conditions such as end-organ malperfusion in acutely dissected patients, or severe poly-distrectual vasculopathy, which require lower temperatures.

At a nasopharyngeal temperature of 26 °C, the pump flow was reduced to 0.8-1.0 liter while the left subclavian and the left common carotid arteries were occluded with a tourniquet. Finally, the innominate artery was gently clamped, the aortic clamp was removed and under unilateral right brain perfusion, the aorta was opened. Myocardial protection was achieved by retrograde infusion of cardioplegia through the coronary sinus. An additional cardiotomy sucker was introduced into the descending thoracic aorta, and the arch was opened as much as necessary to visualize the ostia of the left common carotid artery for endo-luminal cannulation.

Bilateral ASCP was subsequently initiated and a flow of 10 mL/kg/min was established, equally distributed to the right and the left brain. Complete resection of the aortic arch was carried out, leaving in place the island containing the arch vessels. Care was taken to avoid phrenic nerve injury on the anterior and the posterior side of the aortic arch. The true lumen of the dissection was easily identified by the guide-wire, and the false lumen was obliterated using 5 pledgeted 3-0 polypropylene U-stitches with a Teflon felt on the outside of the aorta. In doing so, a robust distal stump was obtained, which facilitated the distal anastomosis and reduced the risk of bleeding to a minimum.

The E-vita open plus system was then introduced over the guidewire and slowly deployed into the descending thoracic aorta. When deploying the stent-graft by gentle counter traction, we recommend balancing the position of the prosthesis so as to migrate towards the descending thoracic aorta. After deployment, the delivery system was removed and the incorporated Dacron graft was pulled back 1-2 cm and sutured to the previously prepared descending aorta using a 2-0 poly-propylene running suture. The entire proximal Dacron graft was pulled back and cannulated using the secondary CPB arterial line.

Lower body reperfusion was established at flow rate of 1.5-2.0 liters while hemostasis was carried out at the distal anastomotic site. During lower body reperfusion, the island containing the arch vessels was also reinforced for the subsequent reimplantation using a double Teflon felt “sandwich” technique. A second short period of circulatory arrest was then instituted and the graft was tailored for the island reimplantation, which was performed with an end-to-side anastomosis using a 4/0 poly-propylene running suture. The clamp from the innominate artery was gently removed, de-airing was carefully performed and antegrade CPB was re-established by clamping the Dacron graft at its proximal end. The left common carotid and subclavian arteries were reopened by removing the tourniquets. The proximal prosthesis-to-prosthesis anastomosis, with reimplantation of the vein graft from prior surgery to the aortic graft, completed the proximal repair. Subsequently, CPB was weaned as usual. Volume loading, red blood cell transfusion, and inotropes or vasoconstrictors were adequately administered to maintain a hematocrit value >30% and a mean arterial pressure >80 mmHg.

One postoperative complication involving transient renal dysfunction was successfully treated with temporary dialysis. No neurologic or other major complications occurred. At discharge, the CT angiogram showed complete thrombosis of the peri-stent false lumen in the descending thoracic aorta. The patient is currently under imaging follow-up to promptly detect any aneurysmal progression of the distal dissected aorta.

The treatment of complex aortic and thoracic diseases still remains a challenge in modern cardiothoracic surgery. The FET procedure represents a valid option of treatment in patients with extensive diseases of the thoracic aorta. Effective surgical techniques and reliable methods of brain and organ protection are key requirements for obtaining favorable postoperative outcomes. Additional data is still necessary to assess both the durability of the FET technique and outcomes in interesting subsets of patients, such as those with chronic dissection.