Mitral valve reconstruction (MVR) is the gold standard therapy for the treatment of mitral regurgitation (MR) today (1). There is currently no reasonable alternative to surgery which is curative and results in the prevention of subsequent heart failure (2). MVR has been demonstrated to be superior to MV replacement with improved post-operative survival rates and preserved left ventricular function (3-5).

The MV is a complex structure made up of five different components: the mitral annulus, the anterior and posterior leaflets, the chordae tendineae, the papillary muscles and the left ventricle. A complex mechanism underlies the systolic and diastolic function of the MV. The two highest prevalence entities are primary (degenerative) and secondary (functional) MR. In primary MR, elongation or rupture of chordae tendineae and/or excessive tissue leads to repulsing or prolapsing of the leaflet into the atrium during systole with resulting insufficiency. Underlying pathologies are fibroelastic deficiency or myxomatous proliferation of the leaflet tissue as seen in Barlow’s disease. In secondary MR, ischemic or idiopathic cardiomyopathy leads to alterations of the ventricular geometry, the subvalvular apparatus and of the mitral annular geometry leading to MR. The goal of a mitral valve repair procedure follows two fundamental principles: to restore a sufficient surface of leaflet coaptation and correct annular dilatation. Different techniques are used to repair the mitral valve: the “French correction” introduced in 1983 with resection of redundant tissue, chordal transfer, chordal shortening and remodelling annuloplasty (6), edge-to-edge repair, papillary muscle shortening, leaflet reduction plasty, and others (7-10).

The paradigm of ‘respect rather than resect’ tissue has emerged in recent years. Respecting this paradigm, the ‘loop technique’, where polytetrafluoroethylene (PTFE) chords are is anchored into the tip of the papillary muscle and ‘loops’ are attached to the free edge mimicking a chordal fan (11,12), was developed.

In this article we will focus on minimally invasive repair of primary mitral valve insufficiency due to prolapse of P2 using the “loop technique” without leaflet resection.

The patient is positioned in a supine position with the right thorax slightly elevated (around 40°). Cardiopulmonary bypass is initiated via the right femoral vein and artery, after administration of heparin through a 3 to 4 cm incision in the right groin. The venous cannula is advanced into the junction between right atrium and superior vena cava under echocardiographic control. The arterial cannula is placed a few centimetres into the femoral artery.

Access to the intra-thoracic cavity is gained by a right lateral thoracotomy through the 4th intercostal space. A soft tissue retractor is placed into the access site to retain soft tissue from the visual field. Lungs have to be disconnected from the respirator for adequate exposure of the thoracic cavity and the left atrium (LA).

A camera port is placed in the second intercostal space lateral to the mid-clavicular line followed by insertion of the camera. In addition, CO2-insufflation is initiated to improve de-airing at the end of the procedure. The transthoracic “Chitwood” clamp is used for cross clamping of the aorta and is introduced through an extra incision medial to the anterior axillary line. A strong retraction suture is placed deep into the inter-atrial groove to lift up the LA and is pulled through the thoracic wall close to the sternal bone but with a safe distance to the internal mammary artery (IMA). The same incision is used for introduction of the atrial roof retractor. The whole setup is illustrated in Figures 1-4. 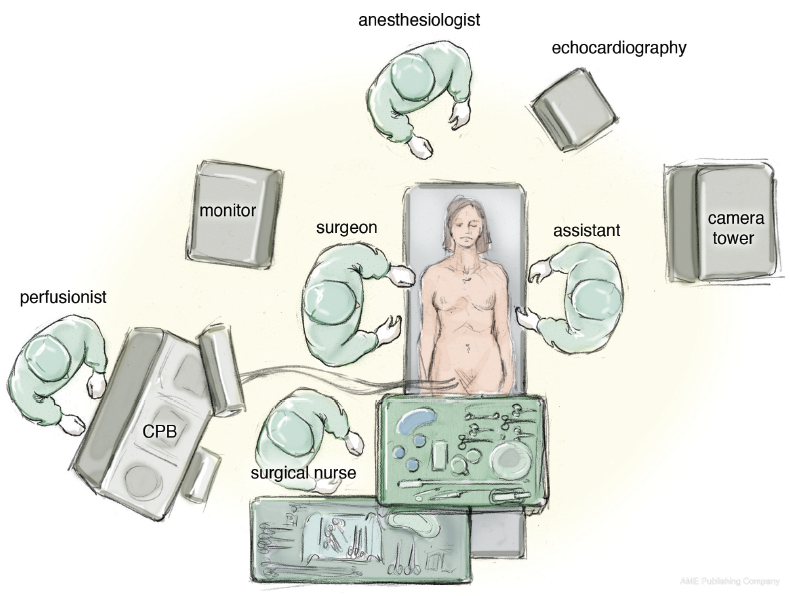 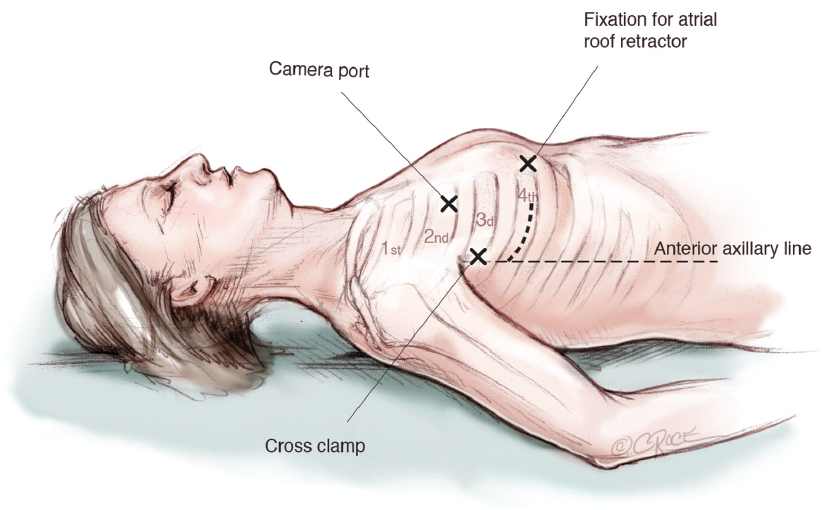 Figure 2 Chest wall landmarks before any incisions are made. 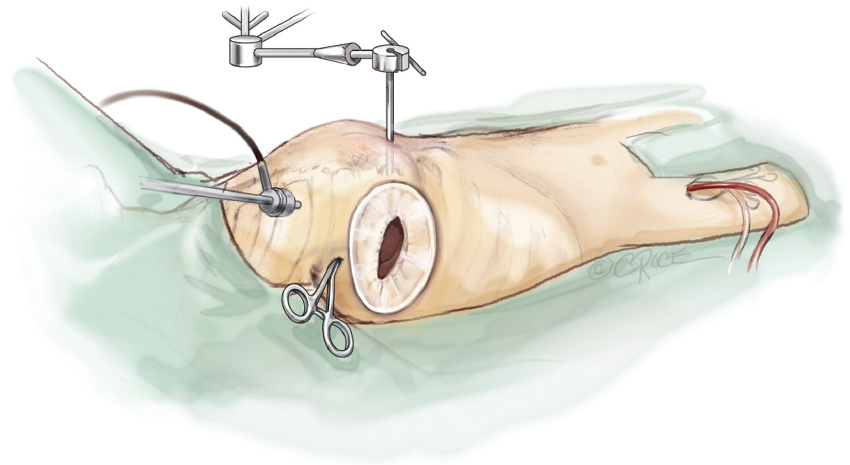 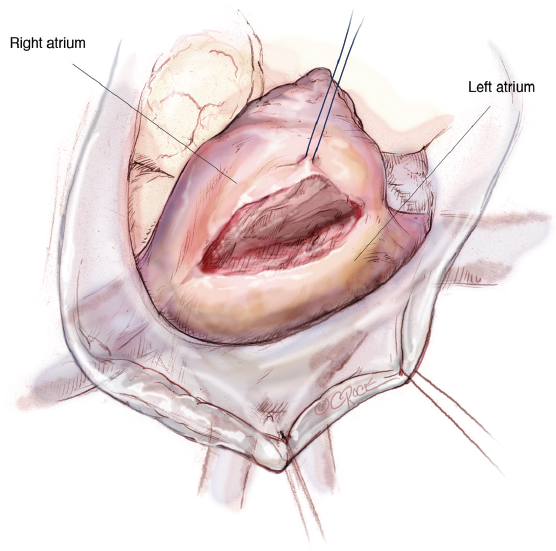 Figure 4 Pericardial incision site after putting two pericardial sutures and a suture in the epicardial fat above the interatrial grove.

Aortic clamping and delivery of cardioplegia

The pericardium is opened above the phrenic nerve, which must be identified. A stay suture is placed in the ascending aorta after blunt dissection with the stiff head of the suction. A root-cannula is positioned and held in place with a tourniquet. The suction is placed below the aorta to lift it up around one centimetre to have space for the cross-clamp. The “Chitwood” cross-clamp is positioned around the aorta and administration of crystalloid Bretschnieder’s cardioplegia follows after cross-clamping (Figure 5). 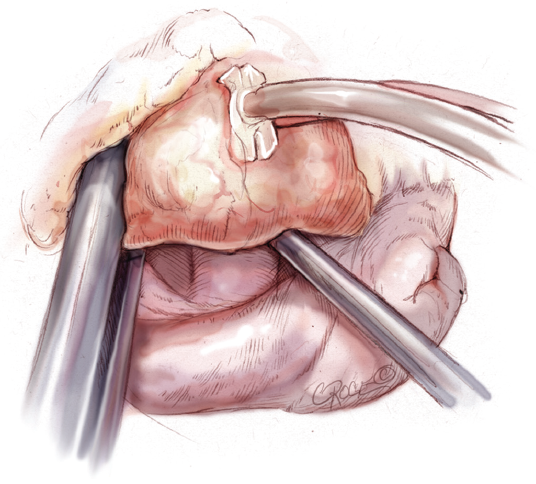 Figure 5 Cardioplegia insertion and cross clamp. Below the aorta, where suction is placed. 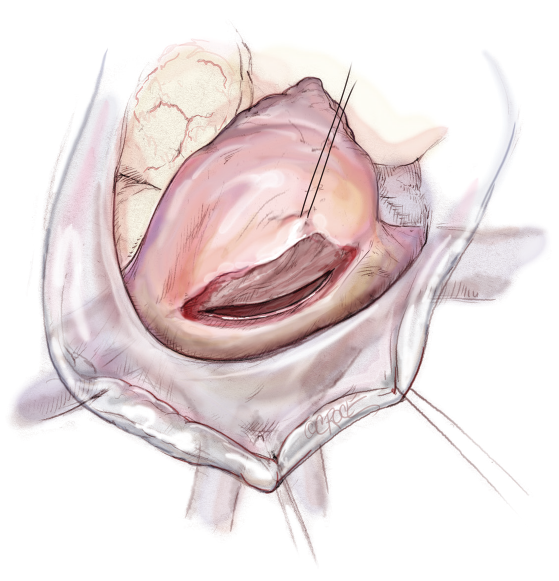 Maximal exposure of the MV is obtained using an atrial roof retractor. The size of the roof blade is chosen according to the size of the LA. If the exposure remains suboptimal, then the LA incision can be enlarged and/or another intercostal space is selected. A permanent pump-suction is positioned in the pulmonary veins to have a dry operative field.

Nerve hooks are used to examine the segments of the anterior and posterior leaflets and the subvalvular apparatus (Figure 7). The preoperative echocardiographic diagnosis should be confirmed during this manoeuvre, including differentiation of primary and secondary pathology as well as the location of these findings. The analysis should be carried out in an organized manner, using P1 as reference point in most cases. The repair strategy should be clarified now. The primary aim is to correct any leaflet pathology, followed by implantation of a complete annuloplasty ring. 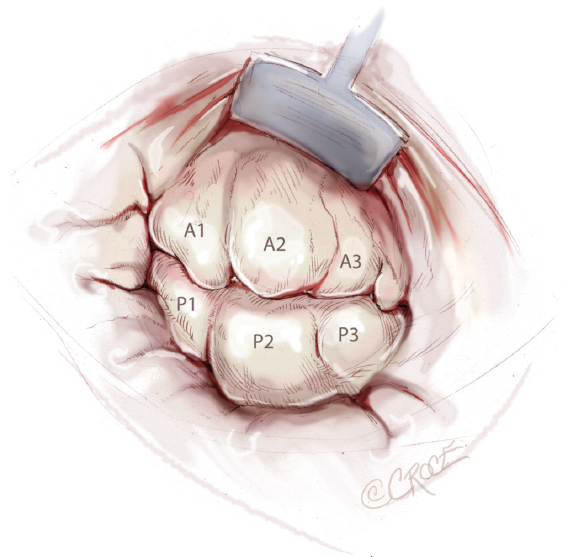 Figure 7 Segments of the mitral valve. A, anterior; P, posterior.

To restore the P2 prolapse, the loop technique is used and is the favoured repair technique in our and many other centres. A crucial step is to determine the required length of the loops. To determine the length of the neo-chords, the distance from the body of the papillary muscle to the free edge of a non-prolapsing portion of the MV leaflet is measured using a custom-made caliper (Figure 8). 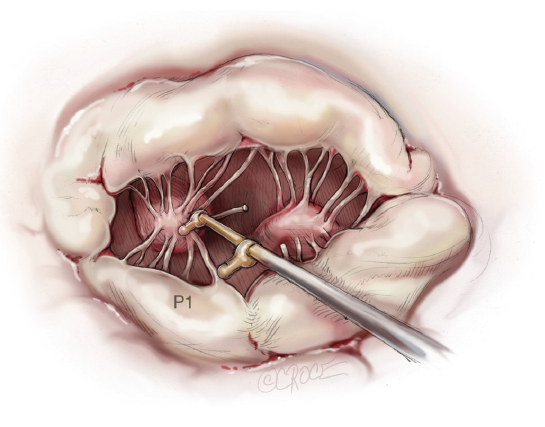 Figure 8 Estimation of necessary chordal length with a caliper.

The loops are commercially available (Santec Medical, Grosswallstadt, Germany). A so-called “loop” consists of a central pledget with four premade single loops, ranging from 10 to 26 mm in length. The needles of the sutures originating from the pledget are passed through the tip of the respective papillary muscle and tied over a second pledget. The free loops are fixed to the prolapsing leaflet segment using 5/0 Gore-Tex sutures, placing the knot on the ventricular surface of the leaflet whenever possible (Figure 9). 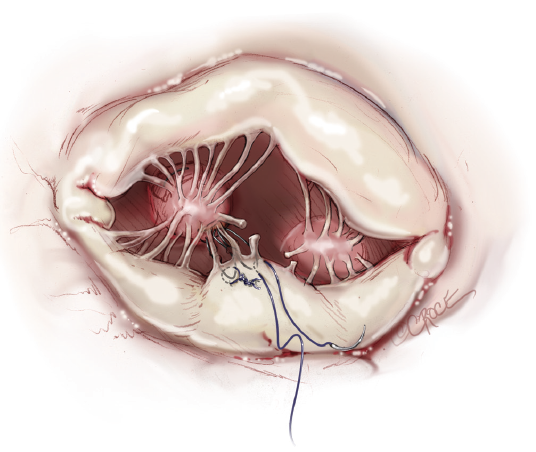 Figure 9 Neo-chordae insertion and fixation at the free margin of P2. 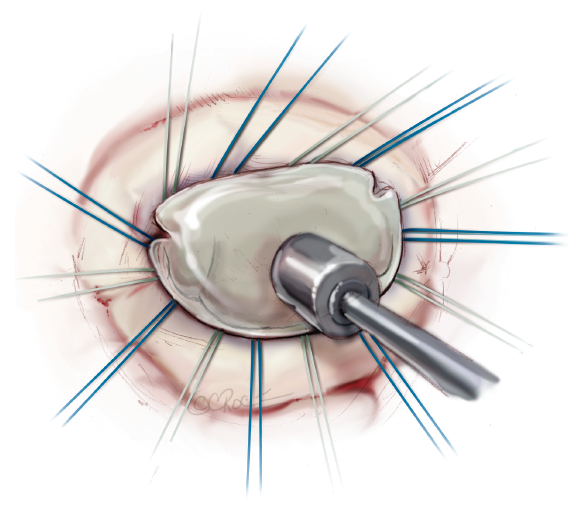 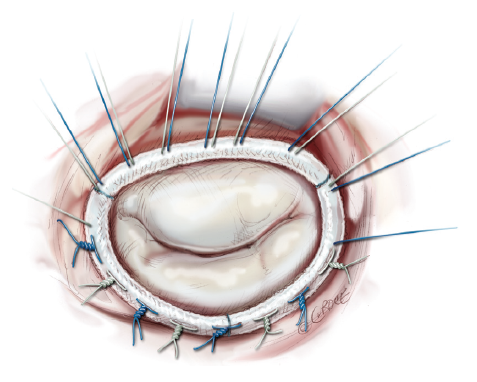 Successful (or unsuccessful) repair is tested with the saline test by filling the left ventricle with saline until a certain pressure is achieved to test for sufficient closure of the valve. If there is no backflow from the ventricle and the mitral valve “smiles” at the surgeon, a successful repair can be assumed (Figure 11).

The atrial roof retractor is released and the LA is closed with standard 3-0 polypropylene suture starting from both sides of the atriotomy (Figure 12). Before final knotting, de-airing is performed by filling the heart while simultaneously inflating both lungs. Knotting is again performed with the help of the knot pusher. CO2 insufflation can be terminated at this point in time. 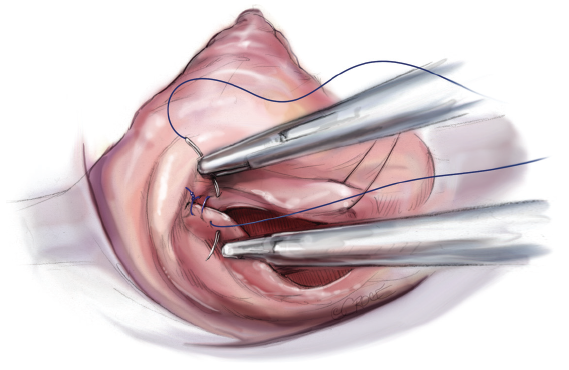 A temporary pacemaker wire is placed at the right ventricle before declamping because the beating heart would significantly limit the access. Subsequently, the aortic root vent is released and the purse string suture is closed. The aortic root clamp is released and the patient is re-warmed. Ventilation is recommenced and the extra-corporal bypass is reduced to 50% flow. Transoesophageal echocardiogram assesses the immediate success or failure of the procedure. To exclude impairment of the circumflex artery, flow in the circumflex artery should be verified and lateral wall motion should be monitored and needs to achieve a comparable level as seen preoperatively. For careful inspection of the suture lines, bypass flow is returned to 100% and ventilation is stopped to have good access to the thoracic cavity again. Afterwards, the pericardium is closed using the pericardial retraction sutures.

A chest tube is inserted through the initial camera port, any other access ports are closed and protamine is given. Extra-corporal weaning is followed by closure of the intercostal space and the lateral thoracotomy (Figure 11).

Transesophageal echocardiography should be performed now to determine the immediate result of the procedure. A finding of more than mild MR should lead the surgeon, except in certain high-risk patients, to perform valve re-exploration to identify and correct any source of potential residual regurgitation.

To date, neo-chord implantation along with annuloplasty is a preferred technique in many centres to treat primary mitral valve insufficiency despite the fact that there is no clear advantage in terms of mortality or durability of the repair compared to resection of prolapsing segments. Surgical mitral valve repair offers a highly effective and safe treatment for patients with MR, even in those patients who require re-operative procedures. Minimally invasive technique shows similar reconstructive results to open repair, but the cosmetic results lead to a higher patient satisfaction and less blood transfusion. An explanation might be that implantation of chords is more straightforward especially when the operation is performed via a minimally-invasive and video-assisted approach. Additionally, this technique permits implantation of larger annuloplasty-rings and a larger area of coaptation can be achieved (13). Results show that the improvement of the techniques lead to better outcomes in terms of mortality and to a decrease in reoperation rates compared to the initial techniques.

Surgery can result in a complete correction of the MR and normalization of valve morphology, and thus represents the only curative treatment strategy for patients with mitral valve regurgitation. It therefore represents the current gold standard for the treatment of MVR.

We want to thank Stefan Schwyter for his tremendous efforts in preparing the medical illustrations.