The natural history of Type B dissections has been difficult to delineate. Despite significant progress in diagnosing and treating patients with Type B dissection, the mortality and morbidity levels are still substantial. Invaluable information on descending aortic dissection has been derived from the International Registry of Aortic Dissection (IRAD) (1).

In this keynote lecture series, we discuss the current understanding of Type B aortic dissection, with an emphasis on criteria for surgical treatment.

Aortic dissection is “the great masquerader” 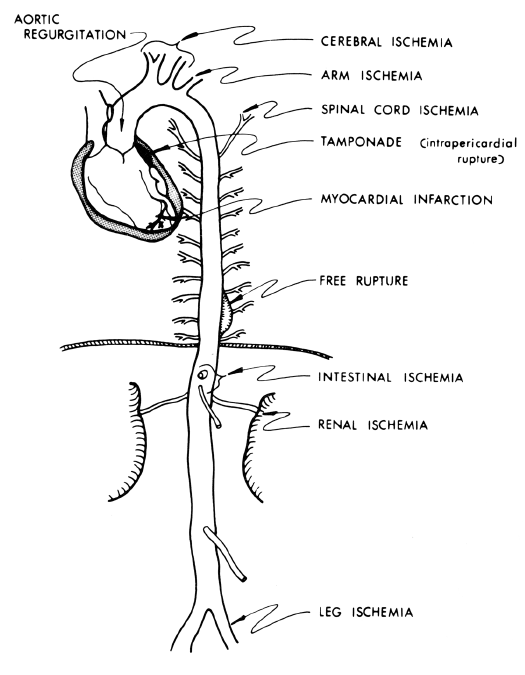 A common misconception is that the occurrence of dissection is a random event in a susceptible patient (8). Several studies have shown that aortic dissection follows circadian and diurnal patterns, with a preponderance of instances in the winter months and in the early morning hours, when blood pressure is known to be highest.

In search of factors or forces that might precipitate dissection, our group identified severe exertion and extreme emotion as etiologic factors in the acute onset of aortic dissection in more than two thirds of our patients (including both ascending and descending dissections) (9-11). A dilated aorta can result from destructive processes such as excess proteolysis by matrix metalloproteinases. We hypothesize that extreme emotional distress and severe physical exertion cause an acute increase in blood pressure, which results in the aortic wall exceeding its tensile limit and dissection (Figure 2). A history of extreme emotion or severe exertion should trigger suspicion of acute aortic dissection. 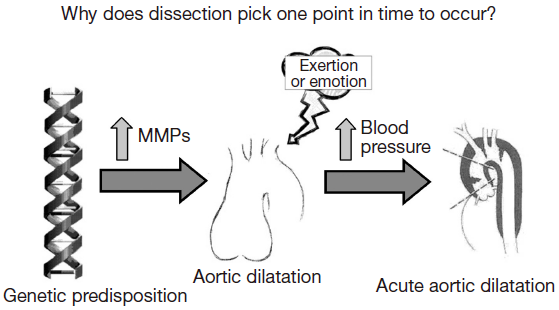 Uncomplicated acute Type B dissection is a relatively benign process

Our experience with acute Type B dissections has shown that in the majority of cases, it is a relatively benign disease compared to Type A dissection. The vast majority of patients do well with medical management alone, unless the dissection takes a complicated course. In our published experience of one hundred consecutive patients with acute Type B dissections, we found that the early survival of these patients is high at 91%. Furthermore, 66% of survivors had an uncomplicated course after acute Type B dissection and were successfully treated with anti-impulse therapy alone (Figure 3) (3). It is important to bear in mind this relative benignity when considering widespread routine endovascular therapy of Type B aortic dissection. 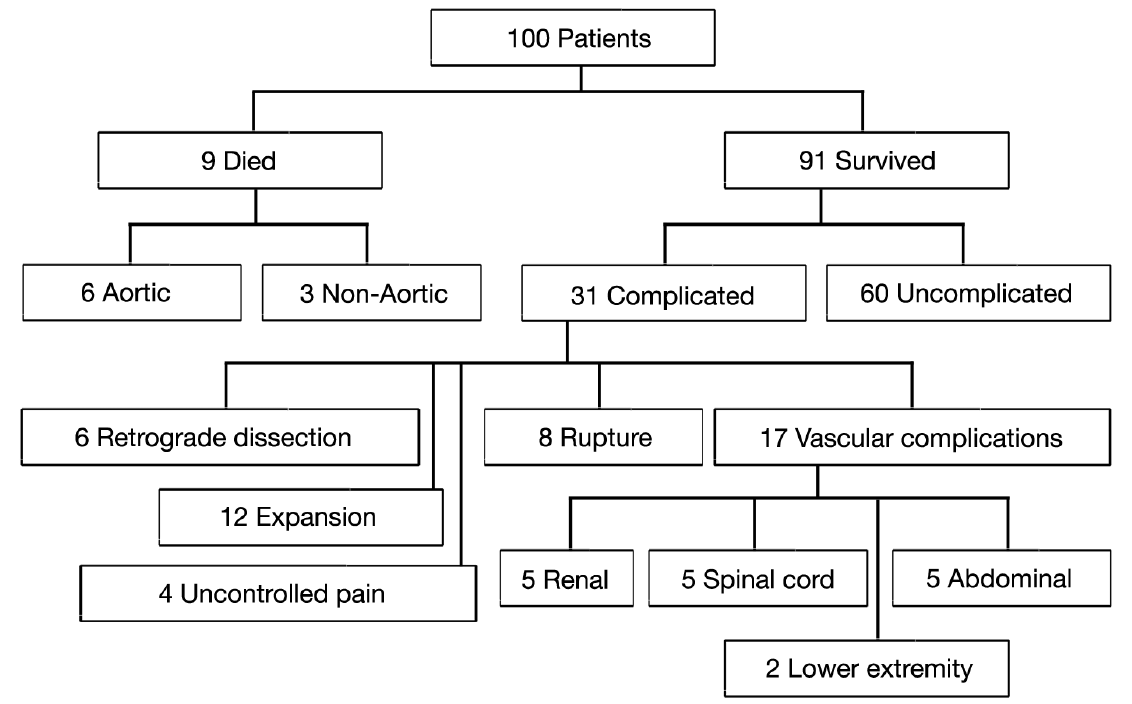 Dilatation, when it does occur, affects predominantly the upper descending aorta

There is evidence that in certain patients, the dissected descending aorta dilates in late follow-up (13-15). The growth rates for the descending aorta are slightly greater than for the ascending aorta (Figure 4), and dissected aortas tend to grow slightly faster than aneurysmal aortas (16). However, in our clinical experience we have seen that the dissected descending aorta predominantly dilates in the most proximal portion, and that this process usually takes years to occur. This notion is also supported in the literature (14). This localized, usually indolent pattern of dilatation is also important to bear in mind when considering widespread routine endovascular therapy of Type B aortic dissection. 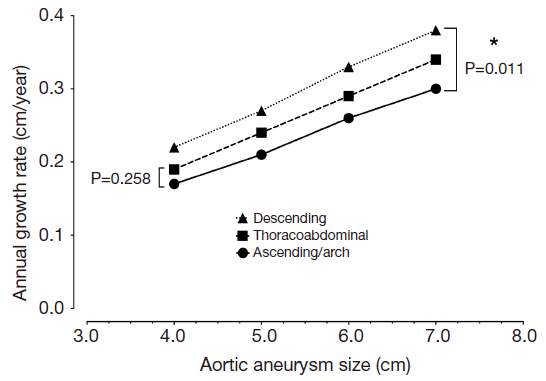 Figure 4 Rates of annual growth of the thoracic aorta.

In patients with Marfan syndrome, Type B dissections often do not occur until after ascending aortic replacement

It is well recognized that patients with Marfan syndrome develop Type A aortic dissection. However, it is interesting to note that 16-20% of Marfan patients develop a Type B aortic dissection after the aortic root has been replaced (20,21). One possibility is that preemptive treatment of the dilated aortic root in patients with Marfan syndrome leads to prolonged life expectancy, which in turn increases the likelihood of later adverse events in the descending aorta (20). The other possibility is that replacement of the aortic root itself may trigger downstream aortic events (20), a notion supported by an experimental study that showed increased tension in the wall of the distal aorta after aortic root intervention (22). Predictors for Type B aortic dissection in patients with Marfan syndrome include previous aortic root replacement, larger diameter of the descending aorta, hypertension, aortic regurgitation and impaired aortic compliance (21). 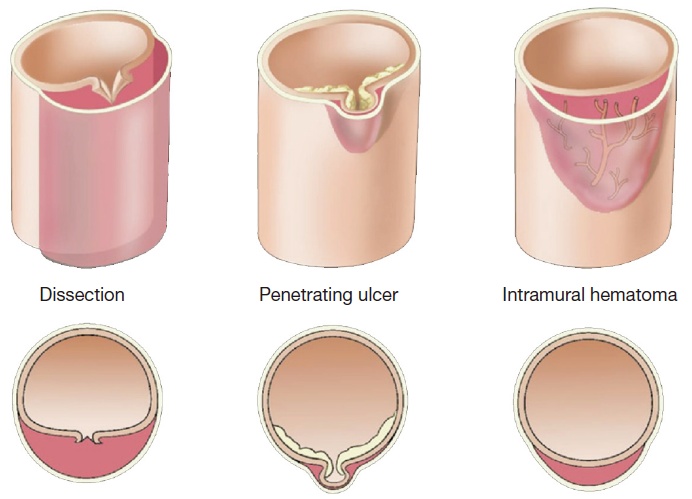 In our clinical experience, symptomatic IMH and PAU have a high incidence of rupture at initial presentation (38% and 26%, respectively), which is significantly higher than the 8% and 4% incidence of rupture seen in classic Type A and Type B dissection respectively (22). However, it must be noted that incidentally discovered IMH and PAU in asymptomatic patients are much more benign. A recent study from IRAD suggests that IMH may have a slightly more benign course compared with classic Type B dissection in the acute setting and recommends utilizing the “complication-specific” approach to treat these lesions (24). However, we still maintain a low threshold for surgical intervention in patients with IMH and PAU, as our mid-term follow-up has shown substantial late death after hospital discharge (23).

Indications and timing of surgical intervention for acute Type B aortic dissection: the “complication-specific approach”

Early surgery for an acute Type B aortic dissection has traditionally been considered an inappropriate surgery, with a high incidence of anastomotic bleeding (perhaps due to the much lower number of lamellae in the descending aorta) (2,25). This disfavor for early surgery lies in contrast to acute Type A dissections, where surgical intervention is highly favored and usually life-saving. Operative indications and the timing of operations for acute Type B aortic dissection remain individualized and difficult to determine (2).

The most recent interdisciplinary expert consensus document on the management of Type B aortic dissection that reviewed 63 pertinent studies published from 2006 until 2012 found that in acute descending dissection cases, the pooled mortality for medical treatment is 6.4%, 10.2% for thoracic endovascular aortic repair (TEVAR), and 17.5% for open surgery (25). The problem with such studies is that the patients in these groups tend to be very dissimilar, with surgical patients often being the most severely ill at onset of therapy.

Two decades ago, our group proposed the use of a “complication-specific” approach for determining the need for surgical intervention (26). We suggested that the majority of uncomplicated cases of descending aortic dissection could be treated medically by “anti-impulse therapy”—beta-blockade and afterload reduction (Figure 6). Surgical management was recommended for complicated cases of dissection (Figure 7). For each type of complication we recommended a specific surgical technique: 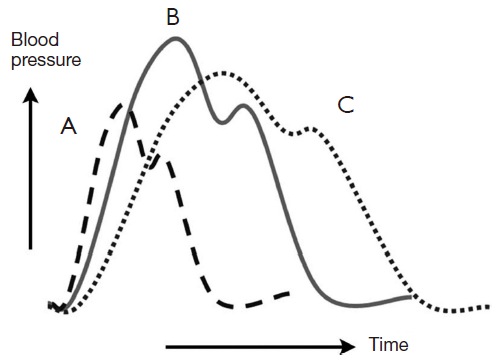 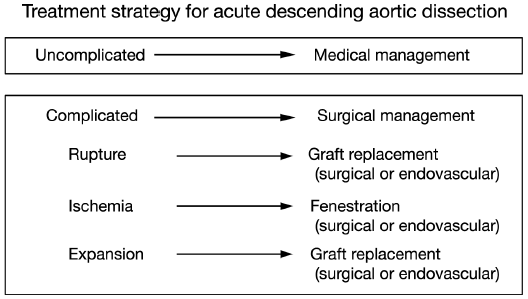 Aggressive endovascular intervention for all Type B aortic dissections, with a view toward preventing late sequelae, is currently being evaluated in the INSTEAD and STABLE trials (29,30). It is too early to form conclusions about such therapy.

For late interventions long after Type B aortic dissection, criteria follow those for chronic non-dissected aneurysms—namely attainment of a diameter of 5.5 cm.

Aortic fenestration is an effective method for decompressing the false lumen of the dissected aorta by creating a window (or “fenestra”) in the intimal layer of the distal part of the aorta (please see the associated surgical technique illustrated in detail in Figure 8) (31). This permits outflow of blood from the false lumen, reduces the intraluminal pressure, and relieves branch vessel obstruction (Figure 9). Over the years, aortic fenestration techniques have proven to provide a safe, effective, and durable treatment alternative to aortic replacement for the specific complication of branch vessel occlusion (33,34). The fenestration must be done early, usually within 24 to 48 hours in order to be effective, before the dissection membrane becomes fixed and the clot becomes organized in the false lumen. The fenestration is effective both above and below the abdominal level at which it is performed. 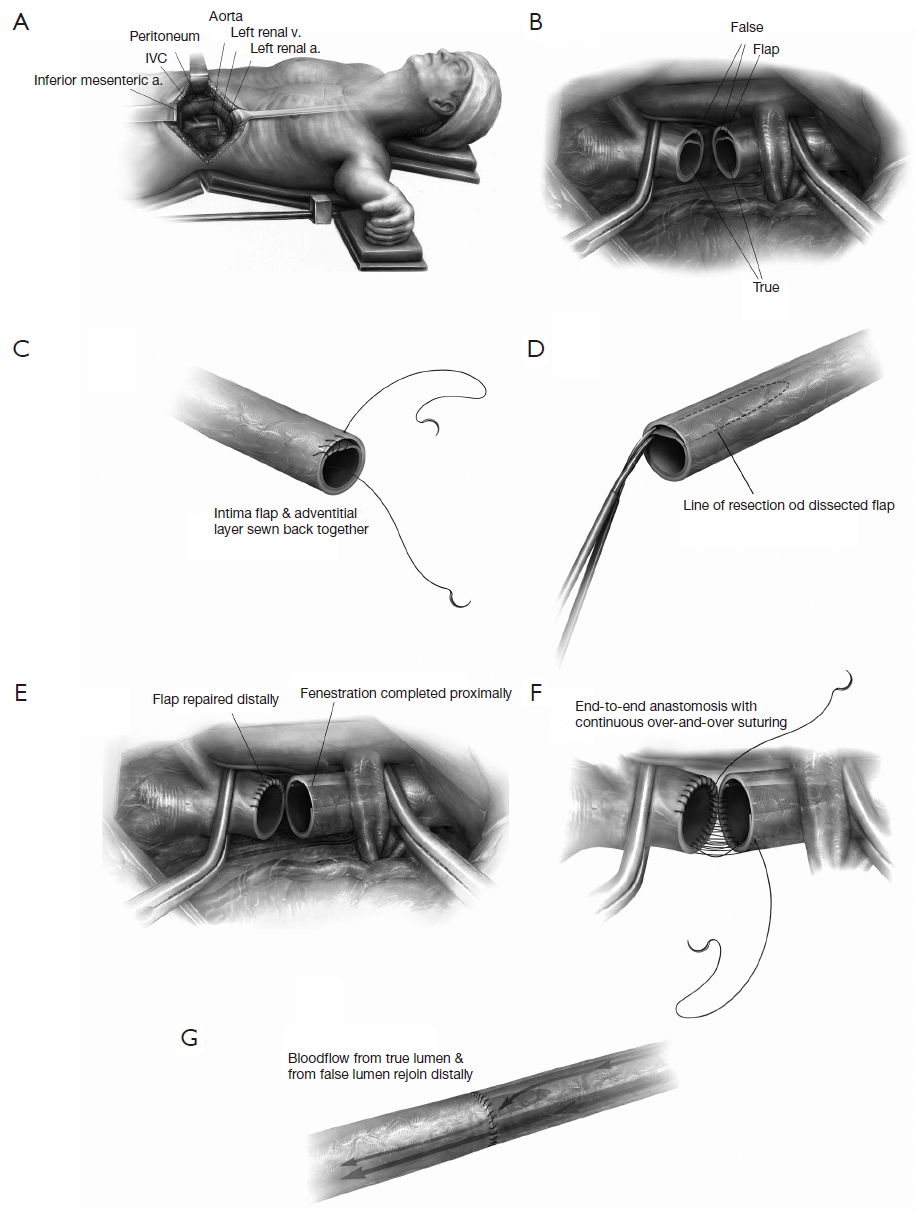 Figure 8 Schematic illustration of the surgical fenestration technique: (A) positioning of the patient, incision, exposure of the retroperitoneal space; (B) the abdominal aorta is clamped proximally and distally, and transected, the dissection flap is visualized; (C) dissection in the distal open end of the aorta is repaired by re-approximate the intima to the adventitial layer; (D) fenestration of the intimal flap is performed on the proximal aorta by excising as much intima as possible, in both circumferential and longitudinal extent toward the proximal clamp; (E,F) the fenestrated proximal end is re-anastamosed to the repaired distal end of the aorta; (G) the clamps are removed and blood flow is restored. [Reprinted with permission from Elefteriades JA, Escalon JC. Aortic Fenestration for Dissection. Operative Techniques in Thoracic and Cardiovascular Surgery 2009;14:12-22. (31)] 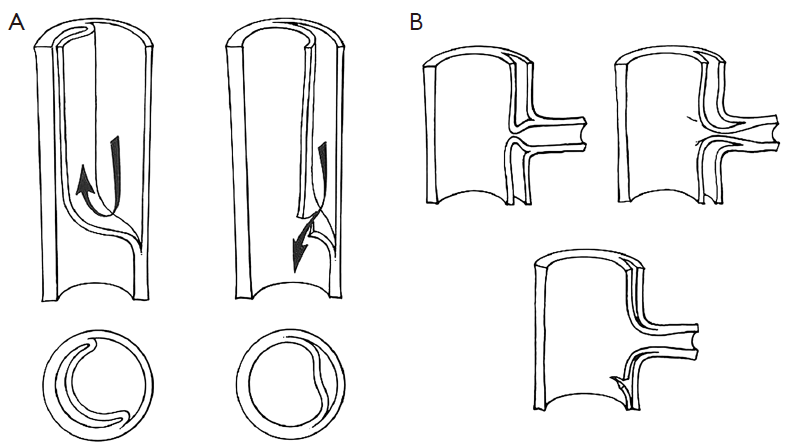 The natural history of a descending dissection is relatively benign, with the majority of patients doing well with medical therapy unless a complication arises that requires surgical or endovascular intervention.