Acute aortic dissection has a high mortality rate, despite well-established treatment guidelines (1). Data on risk factors, incidence and outcome of aortic dissection are limited, largely due to a lack of contemporary population-based studies of this condition. Existing hospital-based studies, often from specialist centers or studies of retrospective registry data such as the International Registry of Acute Aortic Dissection (IRAD), may underestimate incidence and case fatality by incomplete inclusion of deaths prior to hospital admission, which might also bias assessment of risk factors and predictors of outcome.

This research highlight outlines the findings of our recent population-based research of acute aortic dissection, which is the first-ever prospective epidemiological study of this condition (2). We studied event rates, incidence, risk factors, early case fatality, and long-term outcome of all acute aortic events occurring in a population of 92,728 in Oxfordshire, UK, during 2002-2012, as part of the Oxford Vascular Study (OXVASC). Using current incidence data and Office of National Statistics (ONS) population projections (3), we went on to predict UK incidence event rates for acute aortic dissection over the next 40 years.

The OXVASC study population comprises all individuals (10-year average =92,728), irrespective of age, registered with over 100 family physicians in nine general practices in Oxfordshire, UK. In the UK, the vast majority of individuals register with a general practice, which provides their primary health care and holds a lifelong record of all medical consultations, and details of medications, blood pressure (BP) measurements and investigations. All participating practices held accurate age-sex patient registers, and allowed regular searches of their computerized diagnostic coding systems. All practices refer patients to only one secondary care center.

Case ascertainment was by prospective daily searches for acute events and overlapping retrospective searches of hospital and primary care administrative and diagnostic coding data. A study clinician assessed patients as soon as possible after the event. Informed consent was sought where possible, or assent was obtained from a relative. standardized clinical history and cardiovascular examination were recorded. We also recorded the patients’ hospital records and their general practice records details of the clinical event, medication, past medical history, all investigations relevant to their admission and all interventions occurring subsequent to the event.

If a patient died prior to assessment, we obtained eyewitness accounts and reviewed any relevant records. If death occurred outside hospital or prior to investigation, the autopsy result was reviewed. Clinical details were sought from primary care physicians or other clinicians on all deaths of possible vascular etiology. Initial clinical assessments were made by study clinical research fellows alongside the clinical teams. All diagnoses were subsequently reviewed by a vascular surgeon.

All patients with acute vascular events affecting the aorta from the 1st April 2002 to the 31st March 2012 were included. Acute aortic dissection was classified according to the Stanford system into type-A (proximal to left subclavian artery origin) or type-B (distal to left subclavian artery origin). Event rates were defined as the total number of vascular events that led to separate clinical presentations during the study period. All events were categorized as first-ever incident or recurrent and specific to territory. An incident event implied the first ever aortic dissection, irrespective of type. Second events were always recurrent, irrespective of type (i.e., a first type-A event would be classed as recurrent in a patient with only a previous type-B event). An extension of a previous dissection was not considered to be a recurrent event if it occurred within 6 months of the first event.

Analyses were done with SPSS (version 21.0; SPSS Inc, Chicago, Ill, USA). Age-specific and sex-specific rates (per 100,000 population per year) were calculated for incidence and mortality. Since all comparisons were within-population, rates were not standardised to any external populations. Numeric data were expressed as means (standard deviation, SD) or proportions, as appropriate. Group differences in continuous variables were examined with Student t test or Mann-Whitney U test for parametric and non-parametric variables, respectively. Group differences in categorical variables were examined with Fisher Exact test or χ2 test, as appropriate. Gender-differences in outcome were assessed for using multivariable binary logistic regression analysis with adjustment for age. Survival rates were derived by Kaplan-Meier analysis. 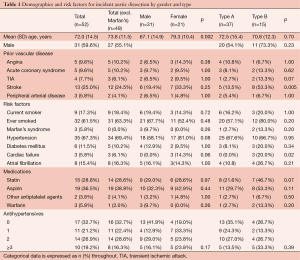 The most prevalent vascular risk factors were known hypertension (67.3%) and having ever smoked (61.5%). For hypertension, the recorded prevalence increased significantly over the 10-year study period from 42.9% in years 1 to 3 to 85.7% in years 8 to 10 (trend over 10 years, P=0.008), reflecting increased routine screening in primary care. With regards to the study population of 92,728, during years 8 to 10 of the study period, 23,633 subjects were aged ≥55, of which 8,881 (37.6%) had diagnosed hypertension and 11,097 (47.0%) had ever smoked. There were no statistically significant sex differences in risk factors for aortic dissection, although hypertension tended to be more common in women, who were also more likely to be on antihypertensive medication.

Figure 1 shows numbers and age/sex-specific incidence rates for incident dissection events. Age of onset was approximately 10 years later in women vs. men, but rates were similar at age ≥75 years. 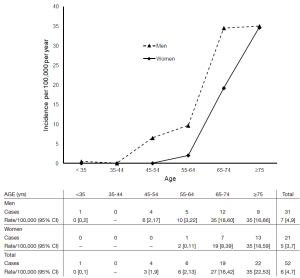 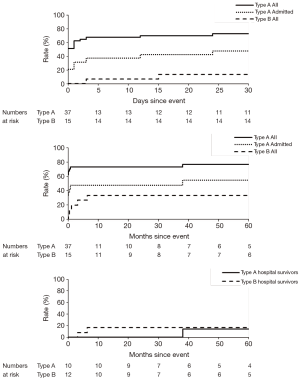 Based on current incidence rates and projected evolution of age/sex population structure, annual incident events in the UK will increase from 3,892 in 2010 to as many as 6,893 in 2050 (Figure 3). Projections also show that over the next 40 years the number of events in the over-85 age group may more than triple, with over 50% of events likely to occur in patients of age ≥75 years, and that the sex distribution will shift, with more type-A dissection events occurring in women than in men, and an equal sex-ratio to be expected overall. 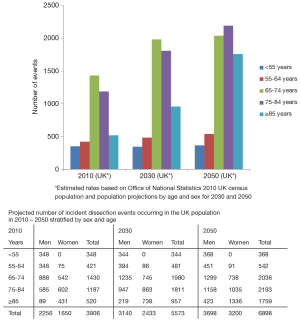 Figure 3 Projected number of incident dissection events occurring in the UK population in 2010, 2030 and 2050 stratified by age.

Previous studies of aortic dissection have been hospital-based, restricted by age or vascular territory, and have had incomplete ascertainment due to exclusion of out-of-hospital cases. Previous epidemiological studies of aortic dissection also predated widespread use of modern diagnostic technology such as CT angiography, and so diagnostic accuracy was potentially questionable. Of the two studies of the epidemiology of aortic dissection commenced since 1980 (4,5), both were retrospective and used only routinely collected diagnostic or mortality coding data to ascertain subjects and neither assessed pre-morbid risk factors or functional outcome. Our study is the first prospective population-based study with comprehensive case-ascertainment and high levels of patient participation (6).

We have reported four main findings. First, the incidence of acute dissection in our study was higher than previously estimated, probably due to more complete inclusion of deaths prior to hospital admission. It is also possible that improvements in vascular imaging might have contributed and that the incidence of acute dissection may have increased since previous studies. Second, we showed that the incidence of acute aortic dissection is now approximately half that of ruptured/symptomatic aortic aneurysms and therefore represents a significant clinical burden. Third, we showed that hospital-based databases, such as the IRAD which include only patients who reach designated tertiary referral centers alive, will miss a substantial proportion (~50%) of patients with acute type-A dissections who die at home or before hospital admission, thereby underestimating overall disease incidence and both short- and long-term case fatality. This selection bias is also likely to account for the lower in-hospital mortality rates found in IRAD compared to other studies where a significant transfer time to a specialist center is not required.

Finally, although patients with dissections had low rates of prior vascular disease, including ischaemic heart disease, diabetes, and peripheral arterial disease, we confirmed previous observations that hypertension is very strongly associated with aortic dissection. Moreover, in the first detailed analysis of pre-morbid BP control in patients presenting with acute dissection, we showed that prior control of BP was poor, despite the majority of patients being on combination antihypertensive therapy, particularly in immediately fatal cases. This high rate of treatment-resistant hypertension may reflect increased aortic stiffness or other pathophysiological mechanisms responsible for the development of acute aortic syndromes. However, better control of BP would nevertheless be likely to reduce incidence and case fatality. Trials of BP-lowering drugs should include aortic dissection in composite outcomes intended to determine the overall impact of treatment.

Our findings also have implications for future clinical service provision. Over the next 40 years the UK population aged 75 or above will double (from 8% to 15%). Our data suggest that over 50% of incident dissection events will occur at age >75 years by 2050 and that the total number of incident events each year may almost double if pre-morbid risk factors are not better controlled. Improved primary prevention, in particular more aggressive management of hypertension and smoking cessation, may reduce future incidence rates, but treatment-resistant hypertension is likely to remain a challenge.

Although we consider our findings to be valid, our study has some potential shortcomings. First, the OXVASC population is 94% white and the proportions of other racial groups are too small (3.1% Asian, 1.5% Chinese and 1.4% Afro-Caribbean) to determine separate event rates and outcomes. However, the proportion of whites is similar in the UK as a whole (88% white) and in many other western countries (Australia 90%; France 91%; Germany 93.9%), although our results will not necessarily apply in the United States (72.4% White, 12.6% African American, 4.8% Asian, 0.9% American Indian, 6.2% Chinese/Other). However, there are few differences in the demographics and outcome of aortic dissections between the IRAD centers in Europe (99% white) and those in North America (91% white). Second, our projections of the likely numbers of future incident aortic dissections in the UK were simplistic, particularly our assumption that current age/sex-specific incidence rates will remain constant. However, in the absence of any reliable data on past trends in incidence of dissections in the UK, this assumption was necessary. Rather than introduce more assumptions about possible future trends in incidence rates (which are unknown), we projected current rates (which are at least known). It is quite possible therefore that our projections will be overestimates.

In conclusion, in the first ever prospective population-based study of acute aortic disease, we have shown that incidence of acute aortic dissection is higher than previous estimates, and have demonstrated the importance of inclusion of out-of-hospital deaths if incidence and outcome are to be reliably determined. We have also identified the critical association between acute aortic dissection and hypertension, particularly hypertension resistant to medication. Ageing of populations and demographic changes indicate future increased rates of disease over the next few decades, with implications for health service provision and future research, especially since surgical outcome has not improved substantially in the recent past despite significant progress in diagnosis and endovascular treatment.

Ethics: The Oxford Vascular Study has been approved by our local research ethics committee.