Aortic valve stenosis is the most common valve disease, resulting in a prognosis of 30-50% mortality at one-year follow-up without intervention for severe and symptomatic cases (1,2). Currently, the conventional treatment of severe aortic valve disease is surgical aortic valve replacement (AVR) through a median sternotomy, with complications and mortality decreasing in recent years (3). However, in an era transformed by an aging population, the presenting patient is increasingly older and sicker with heavily calcified valves, root calcification and with diffuse atherosclerosis and diabetes (4). This modern surgical challenge has triggered the development of less invasive procedures, assumed to diminish the operative risk. Thus, recent advances in technologies have led to the introduction of alternative treatment modalities including sutureless AVR (SU-AVR).

As a cardiac valve substitute, sutureless prostheses reduce the need for sutures after annular decalcification, thereby reducing aortic cross-clamp and cardiopulmonary bypass (CPB) duration and facilitating a minimally invasive approach. While there is current data supporting reduced surgical operative times with SU-AVR (5,6), whether the use of this technology results in improved clinical outcomes remains uncertain. The present systematic review and meta-analysis aims to identify and analyze the available evidence on the safety, clinical efficacy and complications of sutureless valves for AVR.

Electronic searches were performed using Ovid Medline, PubMed, Cochrane Central Register of Controlled Trials (CCTR), Cochrane Database of Systematic Reviews (CDSR), ACP Journal Club, and Database of Abstracts of Review of Effectiveness (DARE) from their dates of inception to January 2014. To achieve the maximum sensitivity of the search strategy, we combined the terms: “sutureless” AND “aortic valve” AND “surgery OR operation OR replacement” as either key words or MeSH terms. The reference lists of all retrieved articles were reviewed for further identification of potentially relevant studies, assessed using the inclusion and exclusion criteria. Expert academic cardiothoracic surgeons (Marco Di Eusanio, Tristan D. Yan) were consulted as to whether they knew of any unpublished data.

Eligible studies for the present systematic review and meta-analysis included those in which patient cohorts underwent AVR using a sutureless valve such as Perceval S (Sorin Group, Saluggia), 3F Enable (ATS Medical, Minneapolis), Trilogy (Arbor Surgical Technologies, California) or Edwards Intuity (Edwards Lifesciences, California). Studies that did not include mortality or complications as endpoints were excluded. When institutions published duplicate studies with accumulating numbers of patients or increased lengths of follow-up, only the most complete reports were included for quantitative assessment at each time interval. All publications were limited to those involving human subjects and in the English language. Abstracts, case reports, conference presentations, editorials, reviews and expert opinions were excluded.

All data were extracted from article texts, tables and figures. Two investigators independently reviewed each retrieved article (K.P., Y.C.T.). Discrepancies between the two reviewers were resolved by discussion and consensus. If the study provided medians and interquartile ranges instead of means and SDs, we imputed the means and SDs as described by Hozo et al. (7). Because quality scoring is controversial in meta-analyses of observational studies, two reviewers (K.P., Y.C.T.) independently appraised each article included in our analysis according to a critical review checklist of the Dutch Cochrane Centre proposed by MOOSE (8). The key points of this checklist include: (I) clear definition of study population; (II) clear definition of outcomes and outcome assessment; (III) independent assessment of outcome parameters; (IV) sufficient duration of follow-up; (V) no selective loss during follow-up; and (VI) important confounders and prognostic factors identified. The final results were reviewed by senior investigators (M.D.E., T.D.Y.).

A meta-analysis of proportions was conducted for the available main perioperative and postoperative variables. Firstly, to establish variance of raw proportions, a Freeman-Tukey transformation was applied (9). To incorporate heterogeneity (anticipated among the included studies), transformed proportions were combined using DerSimonian-Laird random effects models (10). Finally the pooled estimates were back-transformed. Heterogeneity was evaluated using Cochran Q and I2 test. Weighted means were calculated by determining the total number of events divided by total sample size. Weighted Pearson’s coefficient (rs) was used to calculate correlation coefficients for meta-regression analysis of outcomes based on midpoint of study periods. All analyses were performed using the metafor package for R version 3.01. P values <0.05 were considered statistically significant.

A total of 361 studies were identified through six electronic database searches and from other sources such as reference lists (Figure 1). After exclusion of duplicate or irrelevant references, 46 potentially relevant articles were retrieved. After detailed evaluation of these articles, 12 studies remained for assessment, including a total of 1,037 patients undergoing SU-AVR. 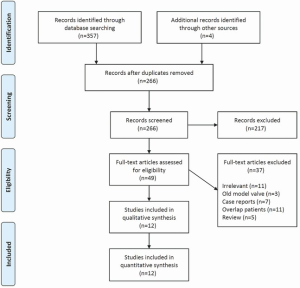 Only 5 studies reported mean follow-up equal or greater than 12 months (5,6,11,18,21). One study (14) reported follow-up up to 4 years. Another study confined analysis only to hospital outcomes (15). 30-day mortality was reported in all studies except Doss et al. (18), while postoperative mortality at follow-up was reported in all studies except D’Onofrio et al. (15). The quality assessment of each included study is presented in Table 2.

Table 2 Assessment of the quality of included studies
Full table 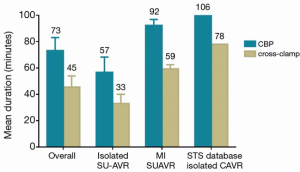 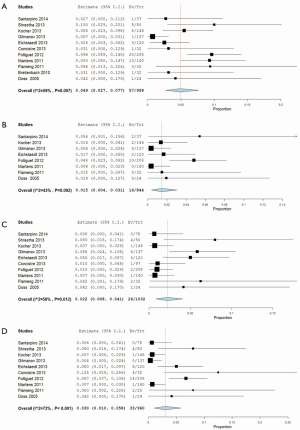 Figure 4 Forest plot of pooled estimates for (A) 1-year mortality; (B) stroke; (C) endocarditis, for patients undergoing SU-AVR; (D) paravalvular leakage. The estimate proportion of each trial corresponds to the middle of the squares, and the horizontal line shows the 95% confidence interval (CI). For each subgroup, the sum of the statistics, along with the summary proportion, is represented by the middle of the solid diamonds. A test of heterogeneity between the trials within a subgroup is also given adjacent to the summary statistics. SU-AVR, sutureless AVR.

Figure 5 Correlation between midpoint of study period and (A) % minimally invasive approach; and (B) % paravalvular leak (PVL) for Perceval S sutureless valves. 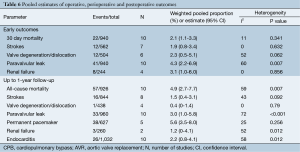 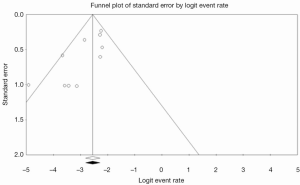 Aortic valve stenosis is emerging as the most common heart disease in Western countries due to a rapidly aging population, yet adequate treatment remains a crucial clinical challenge, especially in mid-high risk patients (1). In order to minimize mortality and to expand the indication of surgical treatment for high-risk patients who are otherwise inoperable, less invasive alternative approaches using innovative technologies have been developed and are increasingly used (15,22). Transcatheter aortic valve implantation (TAVI) and SU-AVR represent two important advances in the treatment of aortic valve disease, and are likely to revolutionize valve therapy in the near future.

Similar to conventional AVR, SU-AVR requires valve excision and annular decalcification, but avoids the use of permanent sutures at the decalcified annulus. Thus, the rationale for its use lies in its potential to reduce operative trauma by decreasing operative times and facilitating minimally invasive approaches (13).

The hemodynamic performance of sutureless valves is another important determinant of their efficacy in patients with aortic valve stenosis. Reduced mean and peak gradients and enhanced transvalvular flow and effective orifice area are indicative of efficacious intervention via a sutureless approach. Reports of mid-term and long-term hemodynamic performance beyond 4 years have been scarce, and therefore the current meta-analysis focused on short-term performance. Sadowski et al. (28) reported maximal and mean gradients of 11.6 and 6.8 mmHg, respectively on discharge. These echocardiographic parameters progressively decreased to 10.1 and 5.2 mmHg at 4 years follow-up, supporting the efficacy of the 3F Enable sutureless valve at short- and mid-term follow-up. These results were similar to the pooled estimates of the current meta-analysis, which reported mean gradients to be decreased significantly from 48.5 mmHg preoperatively to 9.4 mmHg at 1-year follow-up and 8 mmHg at 2-year follow-up. Pooled effective orifice area also increased from 0.7 cm2 preoperatively to 1.9 cm2 at 2-year follow-up, constituting over a 2-fold increase in area. While long-term durability and hemodynamic data is currently lacking, sutureless valves appear to have excellent hemodynamic parameters at perioperative and short-term follow-up.

While SU-AVR appears to facilitate minimally invasive surgery, shorten cross-clamp and CPB duration, and provide excellent valve hemodynamics, whether this translates into improved clinical outcomes is still not well established (29). In the largest prospective, multicenter series including 208 high-risk patients implanted with the Perceval S sutureless valve and followed up to 4 years (14), the reported in-hospital and 1-year mortality rates were 2.4% and 12.9%, respectively. Similar mortality rates were described by Kocher et al., who presented results from 146 patients implanted with the Edwards Intuity sutureless valve (12). The mortality rates at 30-day and 1-year were 2.1% and 7.5% respectively, with 30.8% of patients undertaking a minimally invasive approach for ministernotomy or minithoracotomy. These low mortality rates are supported by the current meta-analysis, with pooled estimates of 30-day and 1-year mortality rates being 2.1% and 5.1% respectively, equivalent to the mortality rates reported recently for surgical AVR. While the above findings are limited by the lack of long-term evidence and randomized comparisons of SU-AVR versus surgical AVR, the evidence to date indicates low and acceptable mortality rates for SU-AVR in the short-term.

In the current study, pooled stroke incidences (1.4%; range, 0-4.8%) appeared to be comparable to available evidence in the literature for conventional AVR (3). As such, the current evidence demonstrates acceptable rates of neurological events for sutureless valves. However, future randomized studies of longer follow-up and larger sample sizes are required to draw definitive conclusions.

Incidence of valve deterioration and dislocation was low, with 2.3% and 0.4% incidence at perioperative and postoperative follow-up, respectively. In contrast to previous studies (20) with reports of up to 12.5%, the pooled results from the current systematic review indicates lower paravalvular leaks (PVL) rates of 2-4% at follow-up. This complication may be a function of the learning curve involved in the introduction of this innovative surgical technique. It is possible that PVL adverse events may be reduced with experience (Figure 5B). Pooled estimates of permanent pacemaker implantations for sutureless valves were satisfactory (5.6%), comparable to pooled estimates of 3.0% for conventional AVR and lower than that for TAVI (13.2%) reported in a recent systematic review (30). Overall, data from the current meta-analysis suggests that sutureless valve implantation has comparable complication rates to surgical AVR. However, further studies are required to confirm whether this is the case at long-term follow-up.

The present findings are limited by several constrains. Multiple outcomes were not adequately reported, including resource-related outcomes such as intensive care unit stay, hospitalization duration, cost-effectiveness and quality of life outcomes. Such parameters are also of critical importance when considering SU-AVR as an alternative to conventional AVR and TAVI. The lack of randomization, blinding and comparators in the included studies indicates an inherent source of unaccounted bias, which may have skewed the presented results. Given the small sample sizes of each study with lack of statistical power and randomization, complication rates may have been underemphasized. Another major limitation of the current evidence base is the absence of long-term data beyond 4 years. The durability and long-term complications of sutureless valves could not be assessed, hence limiting the provision of evidence-based guidelines and recommendations. Long-term studies are also required to compare SU-AVR with conventional AVR and TAVI approaches, particularly in the setting of high-risk patients, to determine whether SU-AVR and TAVI are safe and efficacious, and which approach offers more clinical advantages for each individual patient. Finally, there was significant heterogeneity in outcomes such as PVL and valve degeneration, which may reflect the varying degrees of technical experience between individual institutions and the divergent efficacy and safety between different types of sutureless valve types.