Type B aortic dissection (TBAD) is a life-threatening disease and its management remains challenging. TBAD is classified as acute (≤14 days) or chronic (>14 days) (1) according to the time taken for onset of symptoms. The development of complications, such as rupture, aneurysmatic dilatation or malperfusion syndrome, necessitates surgical or endovascular treatment.

Malperfusion complications may involve renal, visceral, spinal cord and lower limb arterial circulations, inducing occlusion or thrombosis in branch arteries at high risk of end-organ ischemia. Lower limb malperfusion (LLM) is defined as abnormal pulse upon examination in conjunction with leg pain, pallor, paresthesia or paralysis (2). Recent case series (2-11) (Table 1) have reported development of LLM in 5-12% of type B dissections, in up to 40% of complicated TBAD and in up to 71% of dissections with malperfusion syndrome. The presence of LLM syndrome is statistically associated with higher in-hospital mortality (12). 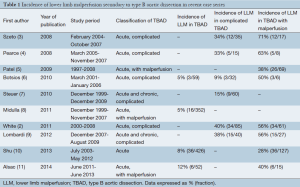 The primary goal of treatment is to restore perfusion of the lower limbs as soon as possible. Extra-anatomic bypass grafting (femoro-femoral, axillo-femoral or axillo-bifemoral) or surgical fenestration represent the traditional treatment approaches. Since the 1990s, less invasive treatments employing an endovascular approach have been proposed. Occlusion of proximal entry tear with stentgraft and endovascular fenestration are two attractive options. Few studies have specifically analyzed lower limb ischemic complication because it is usually not discriminated from ischemia of abdominal visceral districts.

The aim of this systematic review is to provide clinical and procedural data of patients with acute or chronic TBAD complicated by LLM or acute limb ischemia.

The PubMed database was systematically searched from 1st January 2000 to 13th June 2014 for English-language publications reporting on TBAD complicated by acute limb ischemia or LLM. Search terms were “acute limb ischemia and aortic dissection” or “limb malperfusion and aortic dissection”. The reference lists of retrieved articles were also scanned to further identify potentially relevant studies. The search method and results have been reported according to the PRISMA statement (13).

Inclusion criteria for study selection were the following: (I) reporting on LLM and/or lower limb ischemia secondary to TBAD; (II) reporting on demographics of patients with LLM and/or lower limb ischemia. Studies that did not provide demographic data for patients were not included. Case reports were eligible for inclusion, while review and commentary articles were excluded. Articles reporting exclusively on type A, ascending, proximal dissection or isolated infrarenal abdominal aortic disease were also excluded.

Two reviewers (C.B.M. and E.G.) independently screened the title and abstract of records identified in the search. Full text publications were sought and retrieved for studies that the authors agreed to be potentially relevant. Disagreements about final study inclusion were resolved by consensus (i.e., discussion between reviewers).

Treatment type was defined as the procedure performed to treat LLM and, for this reason, hybrid treatments (e.g., aortic stentgraft associated with femoro-femoral bypass graft) were classified as surgical procedures. Technical success was defined as a procedure completed without any intraoperative complication (e.g., thrombosis of bypass graft or accidental coverage of visceral vessel by stentgraft). Clinical success was defined as absence of clinical symptoms and signs of preoperative malperfusion/ischemia at discharge. Post-operative morbidity was defined as new onset of any procedure-related complication. Thirty-day outcomes refer to either the first 30 postoperative days or period of hospitalization. Data were independently extracted by two vascular surgeons (C.B.M. and E.G.) and any discrepancies were clarified through consensus. 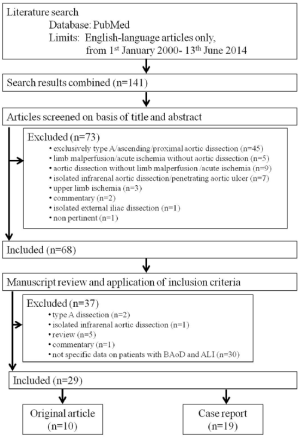 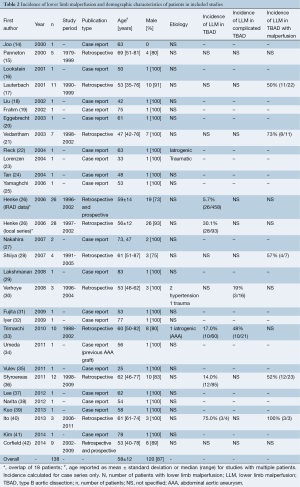 There were a total of 138 patients in the included studies (with an overlap of 18 patients). This included 118 (86%) patients from original articles and 20 (14%) from case reports. The mean age of patients was 58±12 years, and 120 (87%) were male. The etiology of TBAD was rarely reported. Hypertension, trauma and iatrogenic causes were the reported etiologies in two, two and one case respectively (22,23,30). TBAD and LLM syndrome were also observed in association with untreated abdominal aortic aneurysm (29) or in patients treated with surgical graft or endovascular exclusion (32-34). 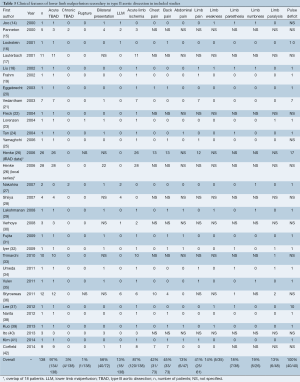 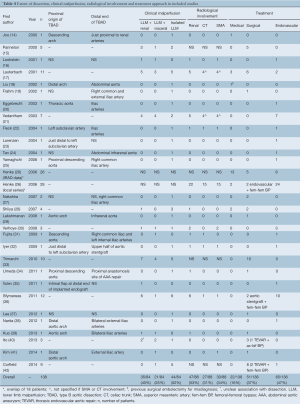 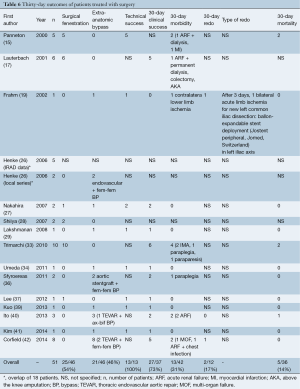 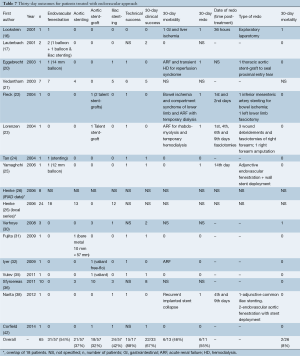 In TBAD patients treated by a surgical approach, technical success was 100% (13/13). Thirty-day clinical failure occurred in 27% of cases (10/37) (five after surgical fenestration and five after extra-anatomic bypass). In addition, 30-day morbidity was 31% (13/42). Systemic complications included five cases of acute renal failure, three cases of myocardial infarction, two cases of paraplegia, and one case each of paraparesis, chest infection, colectomy contralateral lower limb ischemia and amputation above the knee. And amputation above the knee. Thirty-day mortality was 14% (five cases; four after fenestration and one after axillo-bifemoral bypass with associated TEVAR).

Technical success of endovascular treatment was 88% (15/17); procedure failure occurred in two cases (one case of asymptomatic thrombosis of renal artery stent and one case of endovascular fenestration with clinical worsening of the patient). Thirty-day clinical failure developed in 11 cases (33%), of which 6 (18%) were managed with TEVAR. Thirty-day morbidity was 46% (n=6), 3 (23%) of which occurred after TEVAR. Systemic complications included three cases of compartment syndrome with acute renal failure and transient hemodialysis, two cases of gastrointestinal ischemia, and one case each of liver ischemia, isolated acute renal failure and recurrent implanted stent collapse. Thirty-day mortality was 8% (2/26).

Aortic dissection is a catastrophic event affecting the aorta and producing morphological and hemodynamic subversion in thoracic and abdominal arterial districts. TBAD represents about 38% of all aortic dissections (43). Complications occur in 20-45% of acute TBAD cases (44,45) and, in such instances, there is a dramatic increase in associated mortality (45,46). LLM occurs in 28-56% (2,47) of acute TBAD cases and, unlike renal or visceral malperfusion, is associated with poor 30-day outcomes (5).

In our systematic review, we included 29 publications reporting on a total of 138 patients with TBAD and LLM. LLM usually developed during the sixth and seventh decades of life, most frequently affected male patients, with hypertension and typically presented as acute limb ischemia (almost 90% of cases). In a minority of cases, reduced blood flow was associated with pulse deficit without leg threatening disease. In these cases, occurring generally in chronic phase, dissection causes a true lumen diameter decrease that does not result in critical reduction of arterial flow. Another possible mechanism of LLM is the movement of the intimal flap with postural changes. Nakahira et al. (27) reported two cases of atypical leg malperfusion arising due to compression of the true lumen and expansion of the false lumen upon standing.

LLM symptoms vary greatly according to the morphology of TBAD. This condition may actually present more frequently with chest or back pain than limb pain, as limb numbness, weakness or paresthesia only occurred in 15-20% of cases. Complete limb paralysis is not rare and can be caused either by severe acute limb or spinal cord ischemia.

Bilateral clinical presentation is a frequent event (56%). Flow reduction in both lower limbs can be induced by two different mechanisms: collapse of true aortic lumen (14,24,29,35) or bilateral iliac obstruction (31). Therefore, it is not only the iliac districts that should be carefully evaluated.

Isolated LLM was reported in more than 50% of patients included in the present review. However, clinical malperfusion syndrome involving other arterial districts is frequent, with associated renal malperfusion (40%) being more common than visceral (25%). Radiological involvement of the renal or visceral arteries is higher, since not all dissections lead to end-organ ischemia. Renal and visceral arteries were involved in a half and third of cases, respectively. As reported in the literature, radiological involvement of aortic branches is more common in patients with acute limb ischemia (P=0.004), and both mesenteric and renal malperfusion are significantly associated with acute limb ischemia (P=0.002 and P=0.048, respectively) (26).

TBAD and its related complications are routinely diagnosed with computed tomography angiography (CTA), while LLM can be evaluated with color duplex ultrasound. It is critical to distinguish LLM syndrome from the differential diagnosis of peripheral arterial embolism. In the case of acute onset of isolated lower limb ischemic symptoms, this distinction can be difficult. Liu et al. (18) report a case of unilateral lower limb ischemia without thoracic or abdominal symptoms or signs related with TBAD. Angiography was the diagnostic procedure performed, but iliac dissection was not detected. The patient underwent embolectomy without complete proximal progression of Fogarty catheter due to unrecognized iliac dissection. CTA finally revealed the real cause of limb ischemia.

Antihypertensive medical treatment is the first line of therapy in uncomplicated and complicated TBAD, and spontaneous recovery of LLM has been described in some cases. In the present review, 22 (16%) patients were deemed to require no interventional therapy for adequate limb perfusion. Thirty-day outcomes were only available in 6 of these cases, with optimal 30-day clinical success and freedom from mortality. As in uncomplicated TBAD, medical therapy seems to be the gold standard in the case of spontaneous resolution of lower limb symptoms. In these patients, the modification of intimal flap positioning during the acute phase could be the cause of apparent regression of the clinical syndrome.

This review has several limitations. Many studies could not be included for analysis as they omitted patient demographics. Of the included studies, several publications failed to report on outcomes and clinical and procedural data. Another key limitation was the lack of standardization in reporting data and outcomes across studies.

LLM syndrome secondary to TBAD was observed mainly during the acute phase (97%). In the vast majority of patients, LLM led to acute limb ischemia. Bilateral clinical presentation occurred in more than half of all cases, owing to flow limitation or thrombosis involving aorta of bilateral iliac axis. LLM was frequently associated with renal and visceral malperfusion while concomitant spinal cord ischemia was less common. Treatment of hypertension is essential and some cases of mild LLM improved with medical therapy alone. Surgical treatment displayed a higher rate of complications and surgical fenestration had higher mortality. Although the endovascular approach is less invasive, complication rates remained high.