Aortic stenosis (AS) is the most common valve disease, and once symptomatic can lead to a decrease in life expectancy (1). Aortic valve replacement (AVR) has long been the definitive therapy in treating symptomatic AS. However, in the face of an increasingly older population and increasing prevalence of AS, a percentage of patients may not be deemed candidates for surgery due to high surgical risk or other prohibitive risk factors. Transcutaneous aortic valve implantation (TAVI) has become an accepted alternative to surgery in treating severe AS for high-risk or non-operative individuals (2).

TAVI can be performed using several approaches including a retrograde transfemoral (TFAVI), transsubclavian, transaortic, or antegrade transapical. The TFAVI approach is often considered the first choice for TAVI due to its minimal invasiveness and reduced anaesthetic requirement (3). Transapical TAVI (TAAVI) becomes the procedure of choice in instances where patients have excessive atherosclerotic disease of the iliofemoral vessels and aorta, and peripheral access is not feasible. For TAAVI, the balloon-expandable Edwards SAPIEN (Edwards Lifesciences, Irvine, CA) prosthesis with the Ascendra delivery system gained CE (European Conformity) mark approval in 2008. Thereafter, CE mark approvals were granted to the second-generation Edwards SAPIEN XT prosthesis (23-mm and 26-mm valves) and the Ascendra II delivery system in 2010 and the SAPIEN XT 29-mm prosthesis in 2011. Several other devices from different companies (Jenavalve, Jena Valve Inc, Munich, Germany; Embracer, Medtronic Inc, Guilford, CT; Accurate, Symetis Inc, Geneva, Switzerland) have passed “first in man trials” successfully and are being evaluated within multicenter studies (4). The subclavian artery is the other alternative access route when a transfemoral approach is not feasible. The self-expanding CoreValve ReValving system (Medtronic, Minneapolis, MN) is another commonly used valve that can be delivered retrogradely via both transfemoral and trans-subclavian approaches (5).

Despite the growing number of patients undergoing TAAVI each year, there is no comprehensive review assessing the safety and efficacy of this approach. We performed this systematic meta-analysis and review to assess the safety, success rate, clinical outcomes, hemodynamic outcomes, and survival benefits of TAAVI.

A systematic review was performed and six electronic databases including MEDLINE, EMBASE, PubMed, Cochrane Central Register of Controlled Trials, Cochrane Database of Systematic Reviews, and Database of Abstracts of Review of Effectiveness were searched for original published studies from January 2000 to February 2012. To achieve the maximum sensitivity of the search strategy and identify all studies, we used appropriate free text and thesaurus terms: “percutaneous” OR “transcutaneous” OR “transcatheter” OR “transarterial” OR “transapical” AND “aortic valve” OR “aortic valve stenosis”. The reference lists of all retrieved articles were reviewed for further identification of potentially relevant studies.

Studies eligible for this systematic review included highrisk patients with AS who received TAAVI using the Edwards SAPIEN transcatheter xenograft(Edwards Lifesciences, Irvine, CA). The criteria for patient selection for TAAVI varied among institutions, and the definitions for nonsurgical candidates were not uniform. Experimental or observational studies were included in the present review. Case reports, series with less than ten patients, abstracts, editorials, and expert opinions were excluded. Case series limited to a selected group of patients (redo surgeries, valvein- valve implantation, etc.) were excluded.

Serial publications reporting accumulating numbers of patients or increased length of follow-up were identified. The publication with the most complete data set from each center was retained. Data was extracted from two papers from each of the two centers that had competing data on the same patient population (6-9).

Two reviewers (M.R. and J.S.) independently appraised each included study using a standard form and extracted data on methodology, quality criteria, and outcome measures. All data was extracted and tabulated from the relevant articles’ texts, tables, and figures. The quality of studies was assessed using criteria recommended by the National Health Service Centre for Reviews and Dissemination case series quality assessment criteria (University of York, Healington, United Kingdom) (10). Clinical effectiveness was synthesized through a narrative review with full tabulation of results of all included studies. Discrepancies between the 2 reviewers were resolved by discussion and consensus with a third investigator (T.D.Y.).

Despite some variations, similar steps are followed in various centers. The operative technique for TAAVI is well described in the literature (11). In brief, an anterolateral mini-thoracotomy is performed in the fifth intercostal space. After pericardiotomy, the left ventricular apex is punctured between two pledgeted purse-string sutures. Balloon valvuloplasty of the stenotic valve is then performed under rapid ventricular pacing. Under guidance of fluoroscopy and transesophageal echocardiography, the valve is then positioned within the aortic annulus and implanted during a second period of rapid ventricular pacing.

After removing duplicates, the titles and abstracts of 671 peerreviewed publications were identified through searching the 6 electronic databases. Initial evaluation of these abstracts identified 151 potentially relevant publications. Manual search of the reference lists identified 3 additional publications of interest. When the inclusion and exclusion criteria were applied to these 154 publications, 48 articles (3,6-9,12-54) remained for assessment (Table 1). In total, 25 series presented in 27 studies (3,6-9,21-23,28,30-32,34,37,38,41-45,47-51,53,54) including total number of 2,807 patients were included for appraisal and data extraction (Table 2). 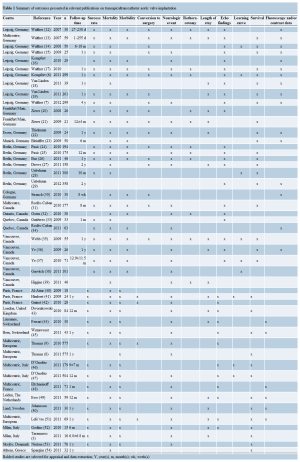 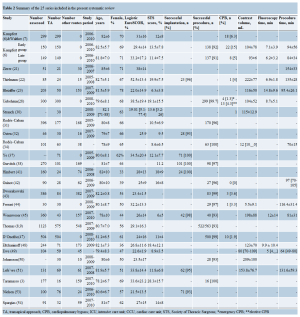 Success of the procedure occurred in >90% of cases in studies that reported this outcome (Table 2). Procedural success rate was 92.7% (522/563) in a multicentric European registry (SOURCE registry), with 20 patients (3.5%) requiring conversion to open AVR (8). Valve-invalve implantation was required in 19 patients (3.3%) in the SOURCE registry to correct malposition or moderate/ severe aortic insufficiency after placement of the first valve (8). D’Onofrio et al. (47) reported successful implantation in 99% (500/504) of patients undergoing TAAVI in an Italian multicentric registry. Valve-in-valve implantation was performed in 3 patients because of malpositioning of the first prosthesis and 1 patient required conversion to an open AVR after the valve embolized to the left ventricle.

Kempfert et al. (6) reported similar device success rates in their first 150 patients (138/150; 92%) compared to the next 149 patients (137/149; 91%) that had undergone TAAVI. Requirement for conversion to AVR or valve-in-valve implantation was similar between earlier and later groups of patients in this series (6). 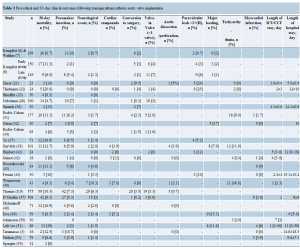 Echocardiographic findings are demonstrated in Table 4. Mean aortic valve area improved from 0.4-0.7 cm2 before TAAVI to 1.4-2.1 cm2 after TAAVI. The peak pressure gradient across the aortic valve decreased from >70 mmHg to <20 mmHg after TAAVI (Table 4). In a few series, symptomatic improvement occurred as evidenced by a decrease in NYHA functional class (Table 5). The number of patients with NYHA functional class III or IV reduced from 71% (42/59) before intervention to 36% (14/39) in 6 months and to 26% (6/23) in 12 months after TAAVI in one series (49).

The multicentric European PARTNER transcatheter heart valve study (51) showed that the frequency of patients with NYHA functional class III or IV symptoms decreased from 85.5% (59/69) before procedure to 14.7% (5/34) one year after TAAVI. When the EuroQol with EQ-5D UKTTO rating scale (not specific for cardiac patients) was used to assess the quality of life, only marginal difference was noted in the one-year follow-up (n=20, 0.59±0.30 baseline vs. 0.66±0.43 one year after TAAVI; P=0.13). However, the Kansas City Cardiomyopathy Questionnaire (KCCQ), a more specific questionnaire for cardiac patients, showed significant improvement in the quality of life in one year (n=23, 49.6±22.7 baseline vs. 77.1±23.4 one year after TAAVI; P=0.0004) (51). 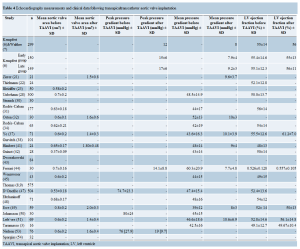 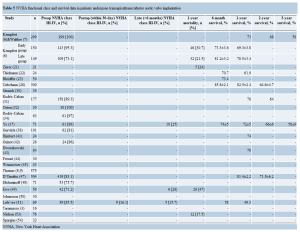 The worldwide experience in TAAVI is growing. The current systematic review presents the procedural outcomes of 24 series with a total number of 2,724 patients that have undergone TAAVI worldwide. The procedural success rate ranged from 93% to 100% across all studies that reported this outcome (Table 2). In the largest series included in this review, Thomas et al. (9) reported a 30-day mortality of 10% following TAAVI. The reported 1-year survival was often greater than 70% (Table 5), with Walther et al. (7) reporting a 3-year survival of 58% in 299 patients who had undergone a TAAVI.

Based on echocardiography and NYHA functional class, TAAVI proved to be efficacious with symptomatic improvement at 6- and 12-month follow-up. However, it remains unclear whether there is a correlation between improvement in valvular hemodynamics and patient’s quality of life (2). One study (European PARTNER) was able to demonstrate a significant improvement in the quality of life at 12 months (51), but additional evidence is still needed.

Learning curves play a role in determining an operator’s and institute’s overall outcomes. In their series of 300 TAAVI patients, Unbehaun et al. (28) reported a reduction in overall 30-day mortality from 6% for the first 100 patients to 2% for the last 100 patients. In the same series, the six-month survival rate increased from 84% in the early group to 96% in the late group (28). Similarly, Ye et al. (37) reported a 33.3% mortality in the beginning of their cohort and a 12.5% with the remaining patients. Furthermore, Kempfort et al. reported decreased 30-day mortality rates from 11% in the first 150 patients to 6% in the next 149 patients receiving a TAAVI. In the same series, the 1-year mortality significantly improved from 30.7% to 21.5% between the two groups (P=0.047) (6). Nevertheless, results from the Italian Registry of Trans-Apical Aortic Valve Implantation (I-TA) suggested no significant differences in outcomes between high- and low-volume centers and between the first and the second 50% of cases (47).

In a joint position statement published for 2012, the American College of Cardiology Foundation (ACCF) Board of Trustees, American Association for Thoracic Surgery (AATS) Council, Society for Cardiovascular Angiography Interventions (SCAI) Board of Directors, and Society of Thoracic Surgeons (STS) have established a guideline of recommendations in the selection of patients for TAVI, who would be deemed a prohibitive or high surgical risk, yet there are no specific inclusion criteria for TAAVI (55). To our knowledge, there has been no randomized trial reported so far comparing TFAVI versus TAAVI. Despite TAAVI being considered more invasive than TFAVI, preliminary results suggest TAAVI as having less vascular complications, decreased use of contrast or fluoroscopy, and possible different adverse neurologic outcomes. Based on the current literature, TAAVI and TFAVI patients cannot be compared without a significant bias. Ewe et al. (49) highlighted the possibility of such a selection bias, noting that TAAVI patients carried a higher perioperative risk compared to TFAVI patients. Similarly, Eltchaninoff et al. (48) demonstrated that patients treated by TAAVI had more comorbidities than patients selected for TFAAVI in particular more peripheral vascular disease. This invariably increases their mortality risk. Additionally, Nielsen et al. (53) observed TAAVI patients to have a greater burden of comorbidity, reflected in a higher EuroSCORE than that of TFAVI patients (21.5% vs. 15.9%). The SOURCE investigators (8) also highlighted a higher logistic EuroSCORE (29% vs. 25.8%; P=0.007) comparing TAAVI vs. TFAVI.

In conclusion, based on the results available from more than 2,700 patients gathered in this review, TAAVI can be performed with acceptable safety profiles and reasonable survival outcomes. Furthermore, TAAVI can be chosen as the primary access route, although current common practice uses TAAVI as an alternative when TFAVI cannot be safely performed. Randomised controlled trials are required to compare TAAVI vs. TFAVI as standard primary approaches for TAVI when both techniques are equally feasible.