At our institution, a femoral platform is utilized to establish cardiopulmonary bypass in the majority of cases. We do not perform preoperative screening of the aorta or peripheral vasculature. Careful attention is required during passage of the wire and subsequently the cannula. Intraoperative angiography is utilized when there are any concerns. Our results and concept of negating preoperative screening contradict current beliefs. We hypothesize that the increased stroke rate is attributed to the inadequate removal of air, aortic clamping of a diseased portion of the aorta or inadvertent removal of calcium or other debris that may have entered the heart at the time of surgery.

During our early experience, concomitant minimally invasive aortic and mitral valve surgery was performed via a 6 cm incision over the 4th intercostal space starting at the mid-clavicular line. The 4th interspace was entered and the lower cartilage was transected and re-attached at the completion of the operation. This access allowed excellent visibility of the aortic valve but limited the exposure of the mitral valve as well as the ability to perform complex mitral valve repairs. With this approach, in order to obtain improved visibility of the mitral valve, an additional venous cannula was required in the superior vena cava and the long femoral venous cannula needed to be withdrawn into the inferior vena cava. This allowed increased mobility or buckling of the septum with the atrial lift system (Atrial Lift System, Miami Instruments, Miami, FL, USA) and thus improved exposure of the mitral valve. Despite this, exposure of the mitral valve was not comparable to that obtained via a minimally invasive mitral valve approach performed via a more lateral 4th to 5th intercostal space mini thoracotomy approach.

In an effort to perform more complex mitral valve repairs during concomitant aortic valve surgery, an alternative access was required. This involved placing the patient on the operating table with the right arm over the head and the right posterior chest wall elevated with a roll. An imaginary line is drawn from the middle of the entire sternum and extended laterally. A 6 cm incision is then performed lateral to the anterior axillary line. The intercostal space that coincides with the middle of the sternum is entered and transection of the rib is obviated. In our experience, patients with true double valve pathology will have an inferiorly displaced aorta allowing sufficient exposure of both valves via this access. The positioning and incision described was initially performed during our early experience with minimally invasive ascending aortic and hemi arch replacements with retrograde cerebral perfusion and circulatory arrest. It was observed during these procedures that exposure of both the aorta and the left atrium (Waterson’s groove) was excellent. Despite this, we now prefer performing ascending aortic procedures via a 2nd or 3rd intercostal space mini-thoracotomy incision, similar to a minimally invasive aortic valve replacement approach because of the significant distance from the incision to the hemi arch.

Our myocardial protection strategy consists of one dose of a modified Del Nido solution (4:1 blood/crystaloid) delivered antegrade followed by subsequent retrograde doses if necessary. A retrograde cannula inserted via the right atrial appendage allows downward retraction of the appendage therefore providing additional exposure of the aorta.

Replacement of the aortic valve is greatly facilitated by a complete circumferential transection of the ascending aorta, thus allowing for complete visualization of the aortic annulus. Closure of the aortotomy must be performed in a very meticulous two-layer fashion. There is a potential for bleeding from the posterior-medial suture line which can be very difficult to resolve. Buttressing the suture line with a felt or pericardial strip may decrease the risk of bleeding. A small 1 cm segment of posterior aortic wall can be left intact if there is sufficient visualization of the aortic annulus. Another option is to perform a transverse aortotomy which can be extended deep into the non-coronary sinus in order to improve visibility of the non-coronary aspect of the annulus. Occasionally, a small pericardial patch is required to provide safe closure of the aorta at this level since direct approximation may be difficult.

Another interesting surgical option in extremely highrisk patients with poor left ventricular function and multiple co-morbidities, is to perform an aortic valve replacement and transaortic edgeto-edge repair of the mitral valve. In these patients, after removal of the aortic valve, the A2 and P2 segments of mitral valve are identified and an edge-to-edge repair is carried out with a 4-0 prolene suture placed in a mattress fashion and reinforced with felt plegets on the ventricular side of the mitral valve (15-18).

An observational study by Karimov et al. (25), of 48 double valve procedures performed via a right antero-lateral mini-thoracotomy, demonstrated no postoperative mortality, nor conversions to median sternotomy; demonstrating that this approach is safe and feasible.

The operative technique that we utilize (the “Miami Method”) for minimally invasive, minithoracotomy double valve surgery involving the aortic and mitral valve is demonstrated in a detailed video in this issue under the “Masters of Cardiothoracic Surgery” section.

The benefits of minimally invasive surgery include decreased blood loss, transfusion requirements, and shorter intensive care unit and hospital length of stay. In addition, we have observed lower morbidity, and a reduction in mortality in the elderly and the obese patients. The time from discharge to full recovery is also significantly reduced.

The lateral minithoracotomy approach possibly offers the best exposure to both the aortic and mitral valves, even when compared to a median sternotomy. A sternal sparing approach for double valve disease eliminates the risk of sternal wound infection and mediastinitis. Elderly patients with physical impairments as well as patients with chronic obstructive pulmonary disease (COPD) can be offered more aggressive physical therapy as well as pulmonary toilet since the fear of sternal dehiscence is non existent. In addition, hybrid approaches can be offered with the potential of decreasing the mortality rates of combined coronary and valve disease.

Minimally invasive double valve surgery requires longer aortic cross clamp and cardiopulmonary bypass times. The learning curve for this particular procedure is longer compared to isolated minimally invasive aortic or mitral valve surgery. The reported conversion rate to a median sternotomy is approximately 2.6% to 4.0% (26) and is usually attributed to inadequate exposure. We did not have any conversions in our cohort.

Positioning the arm over the head facilitates the exposure in all patients, especially in female patients with large breasts and patients with an elevated right hemi diaphragm. Careful attention must be paid to specific landmarks to determine access into the chest. This approach allows for any type of complex mitral repair to be performed as well as aortic valve replacement and even concomitant replacement of the ascending aorta and hemi arch.

At our institution, from November 2008 to April 2014, we performed 2,344 minimally invasive valve surgeries, of which, 169 consisted of primary aortic valve replacement with concomitant mitral valve replacement or mitral valve repair. This is the largest series of concomitant minithoracotomy aortic and mitral valve operations that we are aware of. The most common valvular pathology consisted of aortic stenosis with calcific degeneration of the mitral valve (32.4%). This was followed by aortic stenosis with functional mitral regurgitation (16.2%) and aortic insufficiency with functional mitral regurgitation (13.5%) (Table 1). 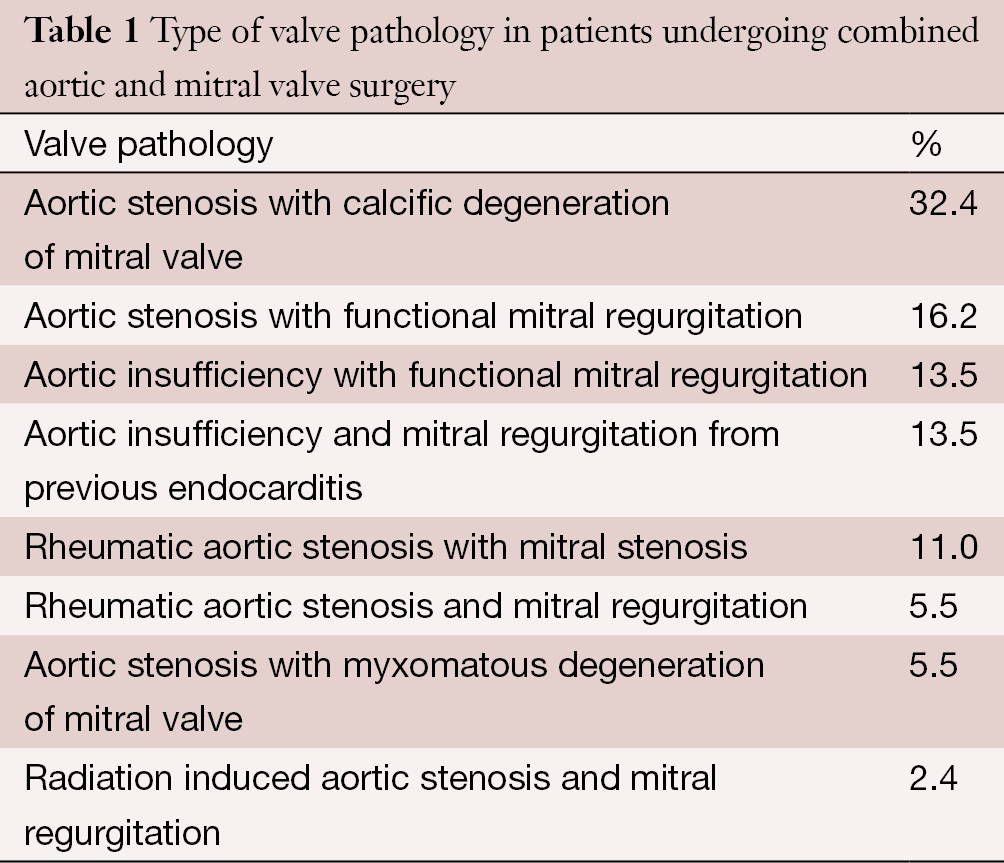 Of the 169 patients, 122 (72%) underwent aortic valve replacement with mitral valve repair, and 47 (28%) underwent replacement of both aortic and mitral valves. For the entire cohort, the mean age of these patients was 73±12 years, and there were 78 (46%) males and 91 (54%) females. The median aortic cross clamp and cardiopulmonary bypass times were 116 minutes [interquartile range (IQR), 91-138] and 145 minutes (IQR, 121-178), respectively. There were 4 (2.36%) patients that required re-operation for bleeding, and 2 (1.18%) suffered cerebrovascular accidents. The median hospital length of stay was 7 days (IQR, 6-12), and the 30-day mortality was 6 (3.55%) (Table 2). Of the entire cohort, 27 patients were performed as a hybrid procedure. A percutaneous intervention with a drug eluding stent was initially performed. Thereafter the minimally invasive double valve procedure was performed, with a median interval of 38 days between procedures. The use of percutaneous coronary intervention (PCI) followed by double valve surgery reduces the morbidity and mortality associated with the surgery. In addition, it allows a minimally invasive technique to be performed in patients with combined coronary and valvular disease.

Dr. Chris Mihos and Dr. Andres Pineda for their contribution to this publication. Dr. Joseph Lamelas recieves honoraria for lectures with Medtronic and St. Jude and is a partner in Miami Instruments.

All surgeries were performed by a single surgeon, Dr. Joseph Lamelas.