Without surgical treatment, patients with thoracoabdominal aortic aneurysms (TAAAs) have dismal survival (1). Consequently, the development of surgical techniques that enabled surgical repair of the thoracoabdominal aorta represented a major advance in the field of cardiovascular surgery. Since the first iterations of open TAAA repair, these operations have made possible the effective replacement of the diseased aortic segment and have reliably prevented aneurysm rupture. However, TAAA repair has also carried substantial risk of perioperative morbidity and mortality, principally caused by the associated ischemic insult involving the spinal cord, kidneys, and other abdominal viscera. Advances in perioperative care, surgical technique, and adjuncts for organ protection have led to excellent outcomes after open TAAA repair in the current era. Nevertheless, surgical teams still face substantial challenges in further reducing the risks of associated complications, especially as they treat an increasingly aged patient population with limited physiologic reserve due to comorbid diseases. Here, we describe the early outcomes of a contemporary series of open TAAA repairs.

Under a protocol approved by the institutional review board at Baylor College of Medicine, we identified 844 consecutive patients who underwent TAAA graft replacement operations between January 17, 2005, and May 31, 2012. Of these, 819 (97%) provided written informed consent for data analysis. These 819 patients underwent a total of 823 TAAA graft replacement operations and thus compose the study group (Table 1). Perioperative data from January 2005 through May 2006 were collected retrospectively through review of all available medical records (155 repairs, 18.8%), and data from June 2006 through May 2012 were collected prospectively during inpatient rounds and concomitant review of medical records (668 repairs, 81.2%). Data related to 509 of the 823 procedures (61.8%) have been reported in a recent publication (2). 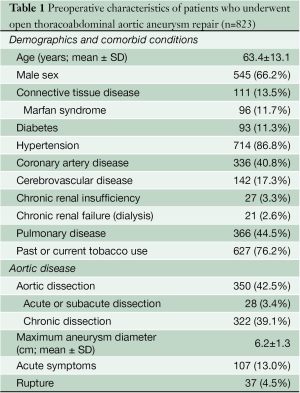 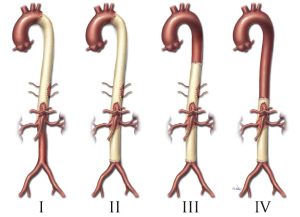 Operative mortality (early death) was defined as death before discharge or within 30 days of surgery. For the purposes of calculating operative mortality and overall length of stay, patients were considered to have been discharged if they were transferred to rehabilitation centers or skilled nursing facilities, but not if they were transferred to long-term care or other acute-care facilities. To determine early vital status after discharge, clinical and research staff telephoned patients, patients’ family members, and patients’ physicians. If no telephone contact was made, letters were sent to the patient’s last known address. When direct contact was not possible, the Social Security Death Index was used to determine vital status. All length-of-stay calculations excluded patients who died before discharge.

Postoperative acute renal dysfunction was defined as an increase in the serum creatinine level to twice its baseline value or the need for hemodialysis during the postoperative period. Acute renal failure was defined as the need for either transient hemodialysis (temporary dialysis that was discontinued before discharge) or permanent hemodialysis (dialysis at discharge or at time of death). Permanent spinal cord deficits were defined as those present at hospital discharge and were further classified according to their severity — paraplegia (inability to move legs) versus paraparesis (leg weakness) — and the timing of onset—immediate versus delayed (4). Cardiac complications included atrial and ventricular arrhythmia, cardiac failure (including inotropic support longer than 48 hours, placement of an intraaortic balloon pump, or both), myocardial infarction, permanent pacemaker placement, and pericardial effusion requiring drainage. Pulmonary complications included acute respiratory distress syndrome, atelectasis necessitating bronchoscopy, pleural effusion requiring drainage, pneumonia, and respiratory failure necessitating ventilator support for more than 48 hours and/ or tracheostomy. When the incidence of complications was calculated, multiple events (e.g., arrhythmia and pericardial effusion) within a category (e.g., cardiac complications) were treated as one occurrence. To better assess the overall incidence of major complications, we defined the composite endpoint, adverse outcome, as the occurrence of any of the following: operative death, renal failure that necessitated permanent dialysis, stroke, and permanent paraplegia or paraparesis (2,5).

Our current techniques for performing graft replacement of the thoracoabdominal aorta are described in detail elsewhere in this issue of Annals of Cardiothoracic Surgery (6,7) and in other recent publications (8-14). Details of the techniques used in the current series are presented in Table 2. We routinely employed a multimodal approach to organ protection (7,9,14); the specific adjuncts used varied according to the planned extent of aortic replacement and various other clinical factors. In all extents, we employed moderate heparinization (1 mg/kg) and mild passive hypothermia (with a target nasopharyngeal temperature near 33 ℃). When we had access to the renal artery ostia, we administered intermittent cold renal perfusion to prevent acute renal failure (8,15); in most cases, we used cold crystalloid solution as the perfusate, although a few patients received cold blood renal perfusion during a clinical trial (16). When possible, we also selectively reimplanted intercostal or lumbar arteries and used sequential cross-clamping. When performing extent I or II TAAA repairs, we used cerebrospinal fluid (CSF) drainage and left heart bypass (LHB), and we often perfused the celiac axis and the superior mesenteric artery (SMA) with isothermic blood from the LHB circuit (9,14,17,18). We did not routinely use evoked potential monitoring. We only used cardiopulmonary bypass and hypothermic circulatory arrest if it was not possible to apply a proximal aortic clamp. 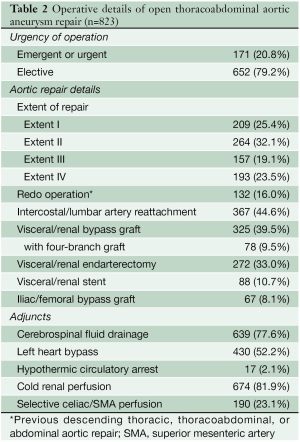 Postoperative outcomes for the overall group and for the different extents of repair are presented in Tables 3 and 4, respectively. The composite endpoint, adverse outcome, occurred after 15.9% of procedures, and the overall operative mortality rate was 8.4%; the risks of adverse outcome and death were both highest in the patients who underwent extent III repairs. The most common complications were those involving the pulmonary system. Permanent paraplegia or paraparesis occurred after 5.1% of repairs; deficits had immediate onset in 43% of cases and had delayed onset in 57%. The incidence of permanent paraplegia was highest after extent III repair. Acute renal dysfunction occurred after 11.5% of the operations; 64% of patients with renal complications received dialysis. Of those needing postoperative dialysis, 74% remained on dialysis at the time of discharge. The incidence of permanent renal failure was highest after extent II repairs. Stroke occurred after 3.3% of cases; 81% of the strokes occurred after extent I or II repairs. 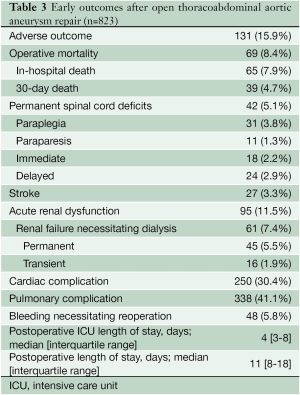 Although open surgical repair of the thoracoabdominal aorta can be life-saving to patients at risk for fatal aneurysm rupture, these operations remain challenging and are associated with substantial risk of early death and major complications. In this report of our contemporary experience with TAAA repairs, we found that 15.9% of procedures resulted in a major adverse outcome, including the 8.4% that resulted in early mortality. Our recent analysis of risk factors associated with complications after TAAA repair revealed that an increased risk of operative mortality was associated with increasing age, pulmonary disease, cerebrovascular disease, aneurysm without dissection, acute presentations (i.e., increasing clamp and ischemic times, and the need for hypothermic circulatory arrest) (2). Independent predictors of adverse outcome included increasing age, pulmonary disease, cerebrovascular disease, and aneurysm rupture; extent IV TAAA repair was associated with a lower risk of adverse outcome. These findings have significant implications because the general population is aging and has increasingly significant comorbidity; surgeons are evaluating increasing numbers of patients whose age and comorbidities place them at substantial risk for complications.

Summarizing the literature regarding the contemporary results of TAAA repair is complicated by inherent differences in approaches to reporting. For example, many reports combine data from descending thoracic aortic aneurysm repairs with data from TAAA repairs. Others exclude extent IV TAAA repairs (19) or focus on a specific clinical subgroup of interest [e.g., patients less than 60 years old (20)]. Furthermore, authors often use different definitions when reporting neurologic and renal complications. Despite these limitations, it is clear that experienced centers are currently achieving respectable early survival and complication rates after open TAAA repair. Recently reported outcome rates range from 3.4% to 8.9% for 30-day mortality, 3.4% to 12.3% for in-hospital mortality, 1.5% to 5.8% for paraplegia, 3.7% to 6.3% for stroke, and 1.7% to 14.3% for renal failure (19-27). It is noteworthy that the different series exhibit substantial variation in important clinical factors (19-27).

For example, the proportion of patients who underwent extent II TAAA repairs ranges between 8.7% and 47.6%. In addition, recent reports show persistent and considerable variability in the surgical approaches and adjuncts that are used at different centers: the use of hypothermic circulatory arrest, renal perfusion, and intercostal artery reattachment ranges between none and routine, and the use of CSF drainage ranges between 75% and 100%. Furthermore, some reports focus on recent experience with contemporary treatment strategies (20-23), whereas others describe 10 or more years of surgical experience (19,24-27). The more comprehensive series provide excellent opportunities for evaluating trends in patient management and results, as well as for assessing long-term outcomes, but these reports are likely to be confounded by changes in treatment approach that occurred during the study period. The more contemporary series tend to comprise patients treated with similar approaches and are particularly useful as comparison groups when new alternative techniques are assessed.

Despite the limitations in reporting and the variation in treatment approaches among the various recent single-center series, these studies support the concept that specialized, high-volume centers are able to achieve respectable outcomes after these formidable operations. In contrast, the few existing population studies of national or statewide data for TAAA repair tend to show much worse outcomes than single-center studies do. For example, a statewide, nonfederal analysis of 1,010 patients revealed an early mortality rate of 25% (28), and national analyses show mortality rates of 20% to 22% (29,30). This difference in results may be at least partially explained by the inclusion of low-volume centers in these multicenter studies. In the statewide analysis, 40% of the patients were treated at centers that averaged only 1 TAAA repair per year (28), and in the national analysis, 37% of patients were treated in low-volume centers (i.e., facilities that performed a median of 1 TAAA repair per year) (30).

In conclusion, contemporary approaches to open TAAA repair yield respectable early results. Nevertheless, these operations continue to carry a substantial risk of early adverse outcomes. Additional improvements are needed to further reduce the risks associated with TAAA repair, particularly as surgeons are faced with increasing numbers of patients with advanced age and comorbidities.