Sporadic mitral valve prolapse (MVP) is one of the most common acquired cardiac valvular abnormalities in industrialized nations. It is a leading cause of isolated mitral regurgitation and is associated with various complications such as infectious endocarditis, heart failure, atrial fibrillation, stroke and death. Myxomatous degeneration involves the spongiosa of the mitral valve leaflets and is sine qua non for MVP. The primary etiology is unknown although its associated histological changes are well characterized. No specific therapy is available to slow or prevent its progression and surgery is reserved to treat its end-stage form or its complications.

MVP can be classified into sporadic, familial or syndromic types. In both familial and syndromic MVP, there is evidence that dysregulation of the transforming growth factor beta (TGF-β) signaling pathway plays a role in its pathogenesis. Marfan syndrome is caused by mutation of FBN1, which codes for fibrillin-1, a principal component of extracellular matrix (ECM) microfibrils that targets latent TGF-β complexes. This results in altered matrix sequestration and dysregulation of TGF-β signaling. Although a less established phenotypic feature of Marfan syndrome, a large proportion of patients have MVP to varying degrees and FBN1 mutant mice develop MVP that can be rescued with TGF-β neutralization (1). Familial patterns of non-syndromic MVP have been recognized but with very variable penetrance even within the same family. Autosomal dominant forms have been identified on chromosomes 16, 11 and 13 and X-linked myxomatous valvular dystrophy characterized by multi-valve myxomatous degeneration is associated with mutations of filamin A, an ubiquitous phosphoprotein involved in the regulation of various cell signaling molecules. These include SMAD2, which is a primary mediator of TGF-β signaling (2). Importantly, excessive TGF-β activity can be modulated with angiotensin receptor blockers (ARBs), mediated through its idiosyncratic anti-TGF-β effects, as demonstrated by prevention of aneurysm progression in Marfan patients treated with ARBs (3).

We studied the pathogenesis of sporadic MVP in patients undergoing mitral valve surgery and proposed a hypothesis that TGF-β activity is excessive in this most common form of MVP and that the pathological changes observed can be inhibited by ARB treatment in vitro (4).

We acquired tissue samples from the diseased mitral valves of patients undergoing surgery for end-stage MVP and normal mitral valves from heart transplant recipients and cadaveric tissue donors. The clinical specimens were examined under various conditions. Furthermore, mitral valvular interstitial cells (VICs) were isolated from the mitral valve tissue and cultured. The VICs and clinical specimens were treated with ARBs and TGF-β signaling and biochemical derangements associated with MVP were evaluated.

A tissue culture model was used to test the effects of TGF-β in human mitral valve tissue. TGF-β treatment induced phosphorylation of SMAD2/3 as well as increased transcription of ECM components. The signaling pathway was inhibited with TGF-β antibody pre-treatment and serologic neutralization of TGF-β resulted in significant downregulation of intrinsic excessive ECM production in diseased tissue without significant effects on low basal ECM expression in normal tissue. This demonstrates that TGF-β is sufficient and necessary for ECM production in this model.

To further dissect the signaling pathways involved, we isolated and propagated VICs from mitral valve tissue. Treatment of cells with TGF-β resulted in a time- and dose-dependent increase in the relative expression of COL1A1, COL3A1 and ELN transcripts. Inhibition of TGF-β receptor 1 kinase, SMAD3 and p38 effectively abrogated TGF-β-induced ECM expression while ERK inhibitors did not have any effects. Immunoblotting confirmed that TGF-β-mediated signaling was dependent on SMAD and p38 but independent of ERK.

To test for possible ARB-mediated inhibition of TGF-β-induced ECM expression, cultured VICs were treated with losartan, candesartan and telmisartan for 30 minutes prior to TGF-β stimulation. This resulted in effective inhibition of TGF-β-induced SMAD and p38 phosphorylation as well as ECM expression, demonstrating that this process can be inhibited in vitro and suggesting that the effects of ARB occur upstream of SMAD and p38 (Figure 1A,B). 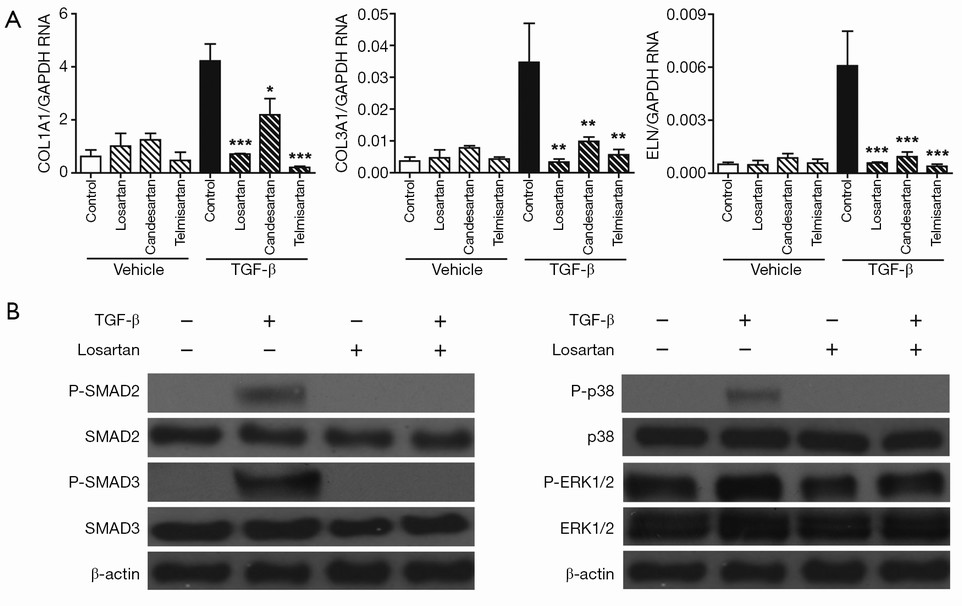 In this study we demonstrated that TGF-β, SMAD2/3 activation and VICs are crucial mediators in the pro-fibrotic manifestations of MVP and that this process can be attenuated by ARBs in vitro. TGF-β appears to play a central role in the pathogenesis of MVP although the primary etiology remains elusive. Continued research into the mechanism involved is important as it may lead to new mechanistically-based strategies to treat a disease that currently has no specific treatment available. The precise mechanism behind the anti-TGF-β effect of ARBs is not clearly defined. It might be independent from the angiotensin II type 1 receptor by shunting of signaling towards the type 2 receptor pathway (5). There is also evidence that ARBs can induce the activity of peroxisome proliferator-activated receptor (PPAR)-γ. Preliminary data from our laboratory suggest that the anti-TGF-β effects of ARBs may be through increased PPAR-γ activity in vitro, but this requires further verification. Due to the high prevalence of MVP, research into potential beneficial effects of ARBs is highly significant as effective prevention of disease progression and complications with a clinically established pharmacological agent could benefit many individuals with early stages of MVP.