It has been established that mitral valve (MV) repair is preferred over replacement in patients with mitral regurgitation (MR) caused by degenerative disease. In contrast, valve reconstruction for rheumatic MR remains controversial. Type IIIa MR due to rheumatic leaflet restriction often renders valve repair challenging and may predict a less successful repair. However, the utilization of leaflet mobilization and extension with autologous pericardium in order to increase leaflet area and surface of coaptation may achieve satisfactory results (1-3). This article represents our single-center experience of leaflet extension in rheumatic MR, with emphasis on description of the technique including tips on safeguards and pitfalls.

Repair techniques for type IIIa rheumatic MR are based on Carpentier reconstruction principles (4), with some modifications tailored to the individual patient. Commissurotomy, papillary muscle splitting, excision of shortened chordae and thinning of leaflets are initially performed to improve mobility and pliability of the leaflets. When leaflet and subvalvular mobilization are deemed inadequate to compensate for extensive tissue retraction and leaflet hypoplasia, leaflet extension or augmentation is adopted to increase the surface area of the leaflet, providing increased mobility and surface for leaflet coaptation.

Which leaflet to extend?

Size of the leaflet extension patch

The patch is usually ovoid in shape, designed to create a curtain-like posterior leaflet to allow for free and generous coaptation against the anterior leaflet (Figure 2). The reconstructed posterior leaflet is commonly about 15-20 mm in height and spans from commissure to commissure in width. A conscious effort is made to avoid excessive height of the extended posterior leaflet (not more than 20 mm) and use of an undersized prosthetic ring to prevent systolic anterior motion (SAM) causing left ventricular outflow tract obstruction. We have not encountered SAM following rheumatic MV repair in our practice nor reported in the literature. This is probably due to the fact that the rheumatic leaflets are rather fibrotic, short and stiff, thus not displaying the propensity of the bulky myxomatous leaflets implicated in SAM. For the anterior leaflet, an incision is made 2 mm from the annulus and extended to both commissures. Two alternative methods of sizing of the patch may be used. Firstly, using nerve hooks to apply traction on the primary chords, pulling down against the posterior leaflet and the defect itself creates the size of the patch. Secondly, with the use of a ring annuloplasty sizer, the patch is sized over a 28-30 mm template. Regardless of whether it is the anterior or the posterior leaflet that is extended, it is important for the width of the pericardial patch to be of generous size, covering the defect created from commissure to commissure. This is to ensure complete mobilization of the entire restricted leaflet, an enlarged leaflet surface area and sufficient surface of coaptation between the opposing leaflet edges. 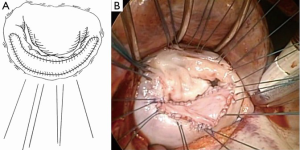 Figure 2 Extension of the posterior mitral leaflet with glutaraldehyde treated autologous pericardium. Note that the patch is made generously wide to extend from commissure to commissure.

It is advisable to first apply annuloplasty sutures around the posterior circumference of the mitral annulus. This initial step improves valve exposure for accurate analysis and avoids pericardial patch dehiscence due to needle-hole perforation, than if the larger annuloplasty sutures were to be inserted after the patch had been sewn into place. The patch is sutured in using two continuous 5/0 non-absorbable monofilament sutures (polypropylene) with fixations at three or four points to prevent purse-string effect. The patch is oriented so that the smooth surface of the pericardium faces the left atrial side to reduce the potential for thrombogenesis.

Leaflet extension is feasible for rheumatic MR and complements the armamentarium of Carpentier’s valve reconstruction methods. The technique is reproducible and offers encouraging midterm outcomes (1,3). Longer follow up will establish the potential durability of this technique. Wider utilization of this technique may increase the success of repair in complex rheumatic MV disease.