Mitral valve repair is currently considered the standard treatment for mitral regurgitation. Posterior leaflet prolapse has been treated by quadrangular resection and ring annuloplasty for many years. Although it is a classic and reproducible method, this technique may predispose to systolic anterior motion (SAM) of the anterior leaflet of the mitral valve. The incidence of SAM has been reported in up to 15% of posterior leaflet prolapse operations involving quadrangular and triangular resection along with artificial chordal implantation. We introduced the butterfly resection technique in 2006 and it was first described in publication in 2011 (1).

The basic concept of the new butterfly technique

This novel technique is designed to control the resultant height of the posterior leaflet with no reduction of the mitral annulus, as illustrated in Figures 1 and 2. Butterfly resection combines a triangular resection from the prolapsing edge with a reverse triangular resection to the annulus to remove redundancy. Generally, the greater the “C-sept” distance between the coaptation line and the ventricular septum, the lesser the risk of SAM (2). Close echocardiographic examination showed that the “C-sept” distance was greater after butterfly technique than after conventional quadrangular resection (3). 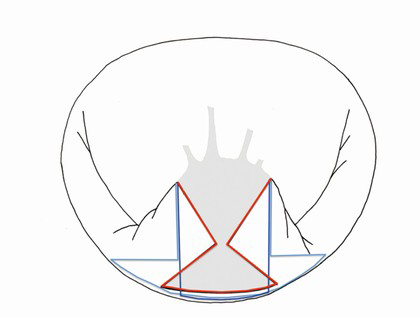 Figure 2 Surgical technique of butterfly resection. (A) The first triangle is designed from the free margin of the prolapsing posterior leaflet segment; (B) the height of the resulting leaflet is determined by the free edges of the first triangle remaining after the excision of the second triangle; (C) the conserved margins are being brought to the annulus without much tissue stress; (D) the cut edges are then sutured to the annulus, using the free end of the first suture, in over-and-over fashion; (E) the coaptation line is far enough from the septum after annuloplasty using Physio II Ring, selected in accordance with the true size of the anterior leaflet.

After the induction of anesthesia, the transesophageal echocardiography (TEE) probe was introduced and the heart was thoroughly evaluated. Pre-repair TEE showed the prolapsing P2 segment with thickened tissue. Severe regurgitant jetting directed toward the aortic valve was also noted.

The mitral valve was exposed using a self-retaining retractor. Prior to a water test, each component of the mitral valve was examined systematically; this included: the anterior leaflet, posterior leaflet, chordae tendineae, anterolateral and posteromedial papillary muscles, and left ventricle. At this point, we measured the heights of four segments (A2, P1, P2 and P3) of the leaflets perpendicularly from the mitral annulus using a small paper scale. The height of the P2 segment was 28 mm, considered very high, and that of A2 was 25 mm, which is the normal height. A water test confirmed the location of any leaflet prolapse.

When the prolapsing segment in the posterior leaflet is redundant and high (above 15 mm), we employ butterfly resection. This case was thus an ideal candidate for the butterfly technique. We started with a simple triangular resection at the free margin, carried out between two intact chordae adjacent to the prolapsing segment. The leaflet tissue was thickened, suggesting myxomatous degeneration.

By holding a scale next to the leaflet cut margin, we marked the appropriate length (15 mm for the P2 segment) to set the intended height of the resulting leaflet. The second resection, a reverse triangular resection, was subsequently carried out with its base at the annulus using a number 11 bladed knife.

The free corners of the cut leaflet were sutured with 5-0 Prolene with C1 needles and were brought down to the annulus, and the suture was tied twice.

Conserved margins of the leaflet were naturally rotated toward the annulus without much tissue stress. The free margins of the cut leaflet were then brought together and secured, at least temporarily, with another 5-0 Prolene suture in figure-of-eight style. The water-test was repeated to check the leaflet shape and the coaptation line. The prolapse was eliminated and an ideal coaptation line was created.

In each step, the water-test was repeated to check the leaflet shape and coaptation line. The procedure was completed by mitral annuloplasty with a semi-rigid 34 mm Carpentier-Edwards Physio II Annuloplasty Ring (Edwards Lifesciences, Irvine, CA, USA) selected in accordance with the true size of the anterior leaflet, especially in the antero-posterior dimension.

An ink test was crucial to confirm the adequacy and even surface of the coaptation. In this case, the P3 segment appeared slightly high but was neither prolapsing nor causing SAM at that location; therefore it was left alone. An adequately large surface of coaptation was confirmed, and the repair was completed.

After the patient was weaned off the cardiopulmonary bypass, the post-repair TEE showed no mitral regurgitation and no SAM. The C-sept distance was sufficient, and allowed the anterior leaflet adequate excursion in the posterior direction.

We have observed that degenerative mitral valve prolapse involves not only chordal rupture and/or elongation but is also almost always associated with some degree of leaflet redundancy, longitudinally and horizontally. Therefore, the remaining height of leaflet following conventional quadrangular, or even triangular resection, tends to be high. Annular plication or compression sutures generally reduced the circumference of the mitral annulus and antero-posterior dimension, which inevitably increases the risk of SAM in some cases.

SAM is not common, but remains a serious complication. The goal of the butterfly technique is to put the coaptation line of the mitral leaflets at a safe distance from the ventricular septum to avoid SAM. The “C-sept” distance between the coaptation line and the septum is the important indicator (2). Echocardiography demonstrated that the “C-sept” distance is longer after the butterfly technique repair compared to after conventional quadrangular resection repair in our series of more than 100 cases.

Resection, as a surgical approach, is not outdated but should be updated with the inclusion of butterfly technique for its geometrically-oriented advantage in reconstruction of the mitral valve. We should be able to “resect with respect”.

We measured the heights of four un-resected segments (A2, P1, P2 and P3) of leaflets perpendicularly from the mitral annulus using a small paper scale. The average leaflet height of P2 was 14 mm in non-prolapsing (normal) segments, but 23 mm in prolapsing segments. There was considerable variation in redundancy. The butterfly technique is indicated when the height of the prolapsing segment exceeds 15 mm.

Leaflet shapes and degrees of leaflet redundancy vary considerably between patients (Figure 3). The typical height of the healthy posterior leaflet P2 segment was about 14 mm in our recent series. Our chosen target heights thus represent a compromise between normal values and the need to avoid a slight curtain effect after resection. Therefore, we adjust the design of each butterfly resection to produce about 15 mm in P2 and 12 mm in P1 and P3 in most patients. Variations of butterfly resection are also easily developed, such as asymmetric butterfly and half-butterfly designs, when one sees different lengths of the leaflet cut margins after the first triangular resection, as illustrated in Figure 3D,E. Acute rupture of chordae with no redundancy, occasionally seen in active infective endocarditis or papillary muscle rupture, may not be a good indication for this method and one may prefer simple triangular resection in such cases.

Our results indicate both the safety and effectiveness of the butterfly technique in mitral valve repair for posterior leaflet prolapse. This is a novel technique to control the resultant height of the repaired leaflet without annular reduction. The butterfly technique can be safely applied to a range of lesions with varying degrees of leaflet redundancy without introducing risk of SAM.

We thank Mr. Piers Vigers for reviewing our manuscript.