Combined mitral valve repair and aortic root surgery are complex surgical procedures. For mitral valve repair, the required techniques may vary from simple implantation of prosthetic rings, to complex reconstruction in patients with full-blown Barlow’s disease. Aortic root surgery may also vary from biological or mechanical conduit implantation to reconstructive techniques, such as David or Yacoub procedures. Often these patients also need extended aortic surgery, such as replacement of the ascending aorta, hemiarch or arch. Long-standing mitral valve disease may necessitate additional surgical procedures, such as occlusion of the left atrial appendage and pulmonary vein ablation.

Concept of the surgical procedure

First, the ascending aorta is opened transversely and the aortic root inspected. Thereafter, the aortic root is prepared and the aortic valve either preserved for DAVID procedure or excised for conduit implantation. From there on, the mitral valve repair is performed. At this stage, it is important to complete all other procedures within the left atrium (e.g., closure of the left atrial appendage, pulmonary vein ablation). Any later manipulation while the two valves are already in place may lead to severe bleeding complications (e.g., atrio-ventricular disconnections). Finally, the aortic root procedure is performed together with replacements of the ascending aorta or aortic arch.

Figure 1 (A,B) Anatomical connections of the aortic root and the pulmonary, mitral and tricuspid valves. [From: Carpentier et al., 2010 (2)].

The mitral valve has four distinct structures, which are close to the annulus (Figure 2): 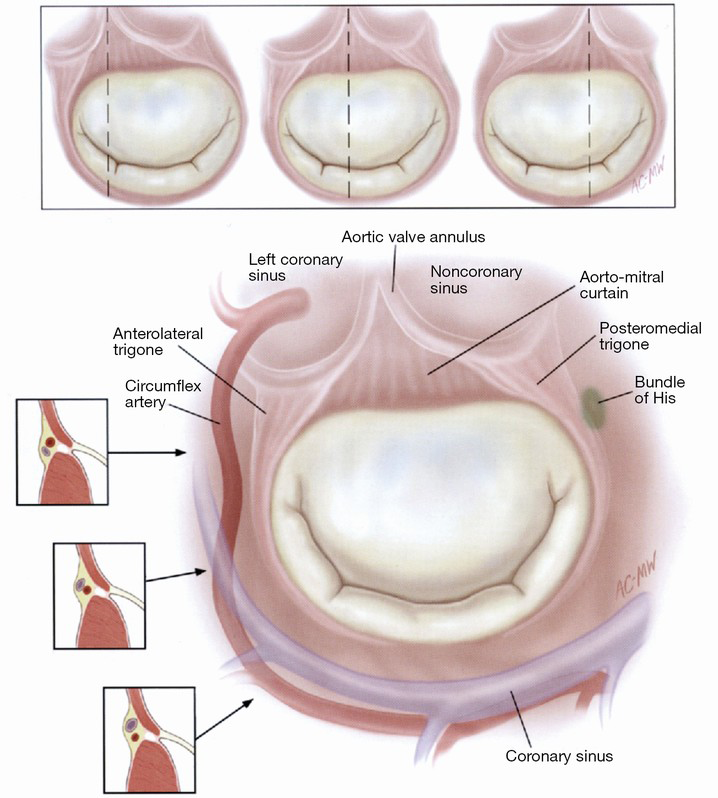 To reduce the incidence of postoperative myocardial failure, the following safeguards should be implemented.

Patients with reduced RV function are at high risk for postoperative myocardial failure. The following questions have to be answered preoperatively:

In patients with reduced LV function:

Coronary embolization during aortic root surgery should be avoided by all means. The surgical field should be insufflated with CO2. In cases with heavy calcifications of the cusps, root and ascending aorta, a small sponge should be placed in front of the left coronary ostium to avoid atherosclerotic coronry embolization. In addition, retrograde cardioplegia should be used for “washout” of any embolic material.

In addition, inadequate mitral valve repair with the necessity of a second aortic cross-clamp period will increase the bleeding tendency after surgery, due to a longer pump run, and may precipitate myocardial failure (especially in patients with reduced LVEF and hemodynamic compromise preoperatively).

Therefore, attempts to repair the mitral valve during an aortic root procedure should only be made in younger patients (<70 years), and if the pathology of the mitral valve allows a safe repair, especially in patients with reduced ejection fractions to start with.

If the mitral valve has to be approached after the aortic root procedure, evaluate which is the best incision for left re-atriotomy, including the standard left atrial approach (Sondergaard’s plane/Waterston’s groove), the transseptal Dubost approach, the transseptal Guiraudon approach, the modified dome approach, and approaching through the roof of the left atrium (3).

A very small aortic root may be a problem, especially if the mitral valve requires repair or replacement. The aortic annulus diameter should have already been measured preoperatively from the CT scan or the TEE. An appropriate strategy plan can be made if the true aortic annulus is known. In particular, beware of smaller and older female patients with a small body surface area. Such patients often have very small aortic roots and mitral annulus’.

In patients with a very small aortic root and annulus, several options exist to either increase the diameter of the anulus or to allow an unobstructed flow from the left ventricle to the aorta:

An oversized aortic valve prosthesis can be a major problem during this combined procedure with concomitant mitral valve repair. Oversizing the aortic valve prosthesis results from either attempting to implant a 19 mm valve in a very small (<19 mm) aortic annulus, or the largest possible valve to avoid any patient-prosthesis mismatch. For the very small aortic annulus (<19 mm), strategies have to be used to increase the annulus in size for a much larger valve (see below). With regard to the largest possible valve, Denton Cooley once said, “More patients dying from a valve that is too large than from a valve that is too small”. The oversized valve may lead to bleeding from the aortic root or the impossibility to implant that valve, necessitating implantation of a new smaller valve and subsequently, a longer cross clamp period.

In order to avoid oversizing the aortic prosthesis, there are tables available showing the necessary effective orifice area index (EOAI) in relation to the body surface area. In addition, the next bigger valve size has also to pass the aortic annulus after debridement.

Bleeding can be another major problem after surgery and there are many different reasons for this complication. It can result due to any of the following, including the aortic root, coronary button reimplantation, the left atrial appendage (after endo- or epicardial occlusion), suture lines, long bypass time, general bleeding tendency (e.g., warfarin or thrombocyte inhibitors preoperatively). The safeguards shown in Table 1 can be applied to reduce bleeding. 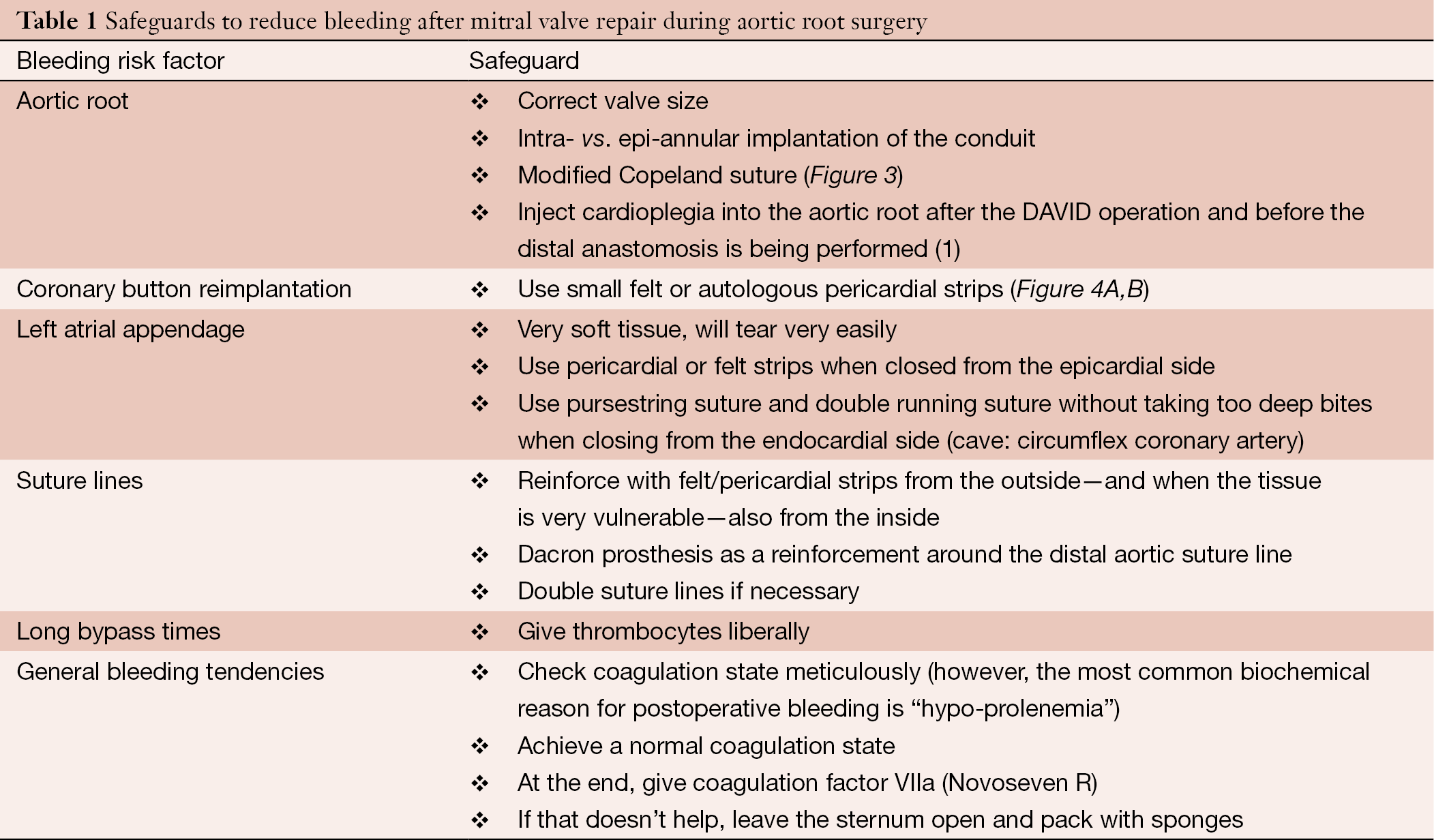 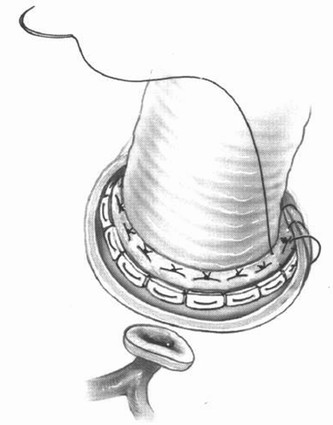 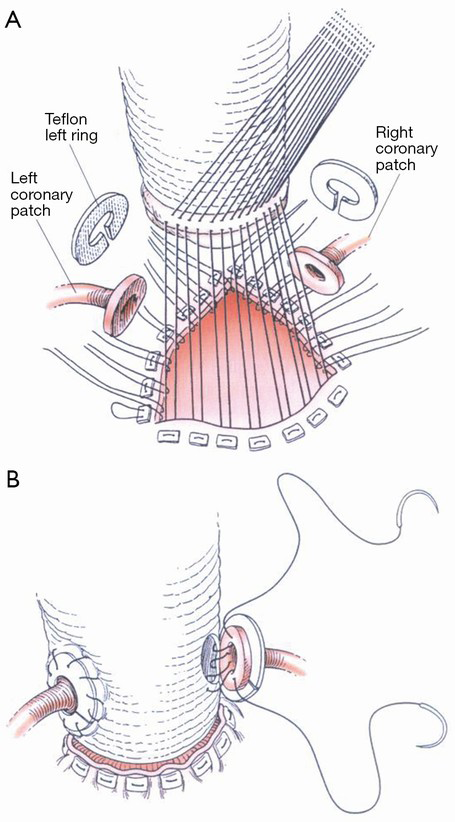 Complete atrio-ventricular block may occur after aortic root surgery. It results from injury of the His bundle near the right and non-coronary annulus during aortic root surgery or from injuring the His bundle during mitral valve surgery near the postero-medial trigone. This problem can only be avoided when taking in account the anatomical relations of the conductive system during aortic root and mitral valve surgery. The surgical technique has to be modified accordingly.

In all surgical procedures, attention to detail is the most important factor for success. This starts with a well thought-out strategy of each single surgical step in the appropriate sequence. In addition, potential complications have to be kept in mind, as well as the correct bail-out procedure for each problem.