The first successful valve surgery of any kind occurred at Peter Bent Brigham Hospital in 1923. This hospital, which is now known as Brigham and Women’s Hospital, was opened in 1913 with Dr. Harvey W. Cushing as the first surgical chair. Besides his primary interest in neurosurgery, Cushing had also been interested in the relief of mitral stenosis for many years while working at Johns Hopkins Hospital in Baltimore. In 1923, Dr. Elliot C. Cutler, who was one of Cushing’s trainees, performed the first successful mitral valve repair. The patient was a young girl with rheumatic mitral valve stenosis who was comatose from low cardiac output. Cutler pushed a knife through the apex of the left ventricle, then encountered the mitral orifice and performed a blind mitral commissurotomy. The patient was discharged from the hospital a few days later. This case was reported in the Boston Medical and Surgical Journal, which is now known as the New England Journal of Medicine, six weeks later (1). Cutler later went on to develop a device to relieve mitral stenosis. Unfortunately, its principle was to excise a large portion of the mitral valve, which of course resulted in severe mitral regurgitation. All of his subsequent patients died and he discontinued mitral valve repair in 1929. In 1925, Sir Henry S. Souttar performed the first finger fracture of mitral stenosis. After the Second World War, Dr. Dwight E. Harken, the first chief of cardiac surgery at the Peter Bent Brigham Hospital, performed a large series of closed mitral valvuloplasties for patients with mitral valve stenosis. Harken had also become famous for removing shell fragments lodged in soldiers’ hearts and lungs. In 1973, Harken reported a twelve-year follow-up of almost 1,600 patients with closed valvuloplasty (2). He worked very closely with Dr. Laurence B. Ellis, who was a cardiologist at Peter Bent Brigham Hospital. This exemplifies the concept that mitral valve problems are best treated by a team involving cardiac surgeons, cardiologists and cardiac anesthesiologists working together.

The first mitral valve repair for mitral insufficiency was performed by Dr. C. Walton Lillehei at the University of Minnesota in 1957 (3,4). Subsequently, the forerunner of the modern techniques for mitral valve repair was reported by Dr. Dwight C. McGoon of the Mayo Clinic in the Journal of Thoracic and Cardiovascular Surgery in 1960 (5). A technique to repair a ruptured cord in the posterior leaflet of the mitral valve was described. The first artificial mitral valve was implanted by Dr. Nina Starr Braunwald at the National Institutes of Health. This valve was a home-made device and was never produced commercially. Mitral valve surgery was subsequently revolutionized by Dr. Albert Starr and his collaborator M. Lowell Edwards at the University of Oregon, who developed the first commercially successful artificial mitral valve in the early 1960s.

One of the early misconceptions about mitral valve surgery was reinforced by a report in the 1970s, suggesting that in some patients the sudden return of competence of the mitral valve has a deleterious effect on left ventricular function and forward flow early postoperatively (6). Unfortunately, this resulted in delayed referral of patients who were very far along in the natural history of the disease because cardiologists were concerned that abrupt closure of the mitral valve would injure the ventricle. Dr. Miller and colleagues at Stanford University then demonstrated the importance of the mitral apparatus in maintaining good ventricular function after mitral valve surgery. This means that the chordae and the papillary muscles should remain intact, which is obviously best achieved by mitral valve repair (7-9). In the 1980s, there was an increased incidence of mitral valve repair, primarily as a result of improved myocardial protection, the recognition that papillary muscle integrity is critical to maintain good ventricular function and long-term data with reconstructive techniques showing excellent outcomes. In contrast, late results with bioprosthetic and prosthetic valves were good but still had a lot of problems. For example, the Hancock valve was the first porcine valve developed, but data showed that these valves degenerated in time (10) and that mitral valves needed to be repaired whenever possible.

The success of modern mitral valve repair depended on the concept of the interactive service line, a collaborative network of cardiology, cardiac surgery and cardiac anesthesia working together. At Brigham and Women’s Hospital, cardiovascular anesthesia in particular has taken a prominent role in assessing the anatomy, physiology, safety and efficacy of the mitral valve repair procedures that are performed. Using echocardiography in the operating room, cardiac anesthesiologists can locate the circumflex coronary artery, detect potential for systolic anterior motion (SAM), clarify the anatomy of the posterior and anterior mitral valve leaflets, measure the intertrigonal distance, and reveal a number of other anatomic and physiologic factors that are important for mitral valve repair. For example, the course of the circumflex coronary artery near the posterior leaflet has resulted in disastrous complications when surgeons did not understand this anatomical relationship.

One of the key principles for repair of the myxomatous mitral valve is that “less is more”. The basic anatomic problem should be relieved first. Once this is done, one should resist the temptation to do more than one needs. 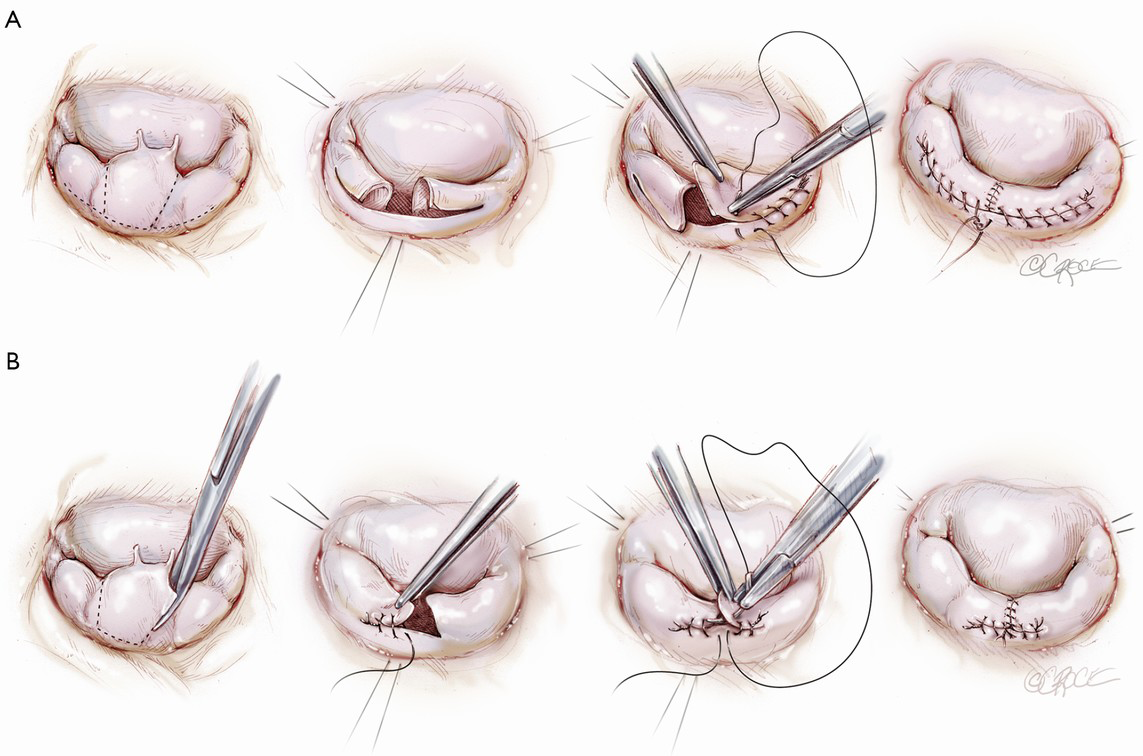 Another simplified technique for mitral valve repair is called a foldoplasty. This involves repair of an isolated prolapse of the P2 segment of the posterior leaflet by folding over the leaflet to reduce its effective height (Figure 2). Similarly, valve damage in the area of the commissures can simply be repaired by a commissuroplasty, which obliterates this part of the valve with mattress sutures rather than resecting and reconstructing this part of the valve (Figure 3). Mitral valves, in particular degenerative myxomatous mitral valves, have a large orifice and can be safely and efficiently repaired in this way to reduce regurgitation.

Figure 2 Foldoplasty involves placing a simple stitch in the leading edge of the prolapsed posterior segment, which is brought back underneath the segment to the annulus and tied there. This adequately reduces the posterior leaflet height without the need for any resection.

Figure 3 Commissuroplasty obliterates damage in the area of the valve commissures with mattress sutures, rather than resecting and reconstructing this part.

SAM is caused by asymmetry of the anterior leaflet and represents one of the most concerning and complex problems that occur after mitral valve repair. In this condition, the anterior leaflet obstructs the left ventricular outflow tract. The most straightforward technique to limit persistent SAM after complex mitral valve repairs is an edge-to-edge repair. Other techniques to limit SAM are more complicated and involve, for example, the use of additional chords. However, in myxomatous valves, which have very large orifices, an edge-to-edge repair is probably the simplest and most straightforward technique to obliterate SAM and to move the operation along (15). At Brigham and Women’s Hospital, edge-to-edge repair is used if there is a potential for SAM or severe SAM following mitral valve repair, but is not used to correct mitral regurgitation following mitral valve repair that is unrelated to SAM.

Patients in this series had a mean age of 60, and 43% were females. The 30-day mortality in this series was 1.3% without a difference among the four decades of performance. FMR had a higher mortality at 4.7% and the other two had mortality less than 1%. Thus, while myxomatous valves do best and rheumatic valves fare almost the same, there are worse outcomes in terms of mortality that are associated with FMR, which is a ventricular disease.

Ring annuloplasty was performed in 95% of patients with myxomatous mitral regurgitation. Exceptions included severe endocarditis, where a prosthetic device is contraindicated in an infected operative field. The most common building blocks of the repair were posterior leaflet resection and commissuroplasty. The recurrence rate was very low. The freedom from reoperation was approximately 90% at ten years and about 80% at 20 years. If the posterior leaflet was repaired only, then freedom from reoperation was slightly lower, while if there was true anterior leaflet pathology the reoperation rate was slightly higher. This is comparable to the results from other groups throughout the world.

All 236 patients with FMR had ring annuloplasty done. Additionally, 77% had a concomitant coronary artery bypass grafting. Freedom from reoperation was much lower because FMR is a ventricular problem. As the left ventricle expands further after mitral valve repair, the patient may develop recurrence of mitral regurgitation even if a very small annuloplasty ring is used.

In patients with rheumatic mitral valve disease, repairs were mainly based on commissuroplasty and subvalvular extension. In this group, many patients had a calcified annulus, therefore a ring was not used in the majority of patients. The freedom from reoperation in this group was not good. At ten years it was 66%, at 20 years 34%, and at 30 years, only 10% did not require reoperation. Overall, rheumatic fever leading to mitral regurgitation is a challenging problem and older patients ought to be considered for primary mitral valve replacement.

Robotic mitral valve repair can be performed via a small incision under the right breast. This operation can be performed with very low mortality, good results and a short length of stay (24,25). Problems may occur if surgeons doing robotic mitral valve repair have not been exposed to conventional techniques of repairing the valve and subsequently have results that are not as good as when using the conventional techniques. However, in the proper hands it is a very effective way of repairing the mitral valve and is as safe and effective as conventional repair (26).