Patients with severe mitral regurgitation (MR) have a poor prognosis, particularly when surgical intervention is contraindicated or high risk (1-3). Percutaneous valve interventions for severe, symptomatic MR are emerging treatments for patients with high surgical risk. Percutaneous mitral valve intervention has been advocated for selected patients in the most recent update of the European heart failure guidelines (4). The EVEREST I and II trials demonstrated the clinical utility and safety of the MitraClip device (Abbott Vascular Structural Heart, Menlo Park, California, USA), for a percutaneous edge-to-edge repair (5,6).

Whilst transthoracic echocardiographic quantification of valvular regurgitation is recommended to identify patients at risk of adverse long-term physiologic consequences, quantification of residual MR following a MitraClip is challenging due to several reasons. These include the presence of the cliplimiting visualization of the jet origin, eccentricity of the MR jets, potential multiple sites of regurgitation, the dynamic nature and altered anatomy of the MR orifice secondary to the presence of a clip after the edge-to-edge “Alfieri”-type repair (7-10). There is a need for improved quantification of residual MR after percutaneous valve intervention.

Cardiovascular magnetic resonance (CMR) provides a quantitative and reliable mechanism to assess ventricular and valvular structure and function (11-13). The MitraClip is a magnetic resonance imaging (MRI)-conditional device and can be safely imaged using CMR (14). Flow CMR imaging provides a direct measure of forward and regurgitant flow across cardiac valves (15-17), and has been demonstrated to have high accuracy and reproducibility for quantification of aortic and MR (18-24). CMR has several potential advantages compared to transthoracic echocardiography (TTE) in this regard, including improved endocardial definition, fewer geometric assumptions and reduced angle dependence as compared to Doppler echocardiography. Use of CMR has been previously reported after percutaneous mitral valve repair (14,25); however, there is no data comparing echocardiography and CMR for quantification of any residual MR (26,27). In this prospective study, quantitative Doppler echocardiography and comprehensive CMR were performed on the same day in patients after MitraClip percutaneous mitral valve repair. The aim was to assess the reproducibility of each technique in the assessment of any residual regurgitation following MitraClip percutaneous valve repair.

Patients with an implanted pacemaker or defibrillator, other non-MRI safe implants, severe claustrophobia, arrhythmia preventing adequate MRI gating, and/or inability to provide informed consent were excluded from the study.

TTE was performed using a commercially available ultrasound platform (Philips iE33, Best, The Netherlands) with two-dimensional (2D) imaging and Doppler data including dedicated pulsed wave (PW) and continuous wave (CW) imaging. Total stroke volume (TSV) was defined as the total volume of blood ejected by the left ventricle (LV) in systole, which included both the regurgitant volume (RVol) and the forward stroke volume (FSV) delivered to the peripheral systemic circulation (28-30).

LV volumes were measured by tracing endocardial borders of stacked short axis images obtained from Cine CMR images covering the entire LV from base to apex, using dedicated third-party software (CVi-42 release 4.1.5, Circle Cardiovascular Imaging, Calgary, Canada). Papillary muscles and trabeculations were included in the blood pool. Care was taken to contour the left ventricular endocardium using the moving cine image as a reference, particularly as the basal slice was affected by varying degrees of susceptibility artefact from the MitraClip devices.

Standard SSFP imaging (TruFISP) was used for ventricular quantification, as the definition between myocardium and blood pool was not judged to be significantly compromised by susceptibility artefact, which was largely contained within the blood pool and did not affect the endocardial border in most cases. Two blinded observers performed the LV contours on SSFP imaging, using the moving cine image of each slice to determine the endocardial border. The agreement between these two observers was excellent [Pearson R-square 0.9, 95% confidence interval (CI), 0.9-1.0; P<0.0001].

Regurgitant volume and fraction were derived by two methodologies: 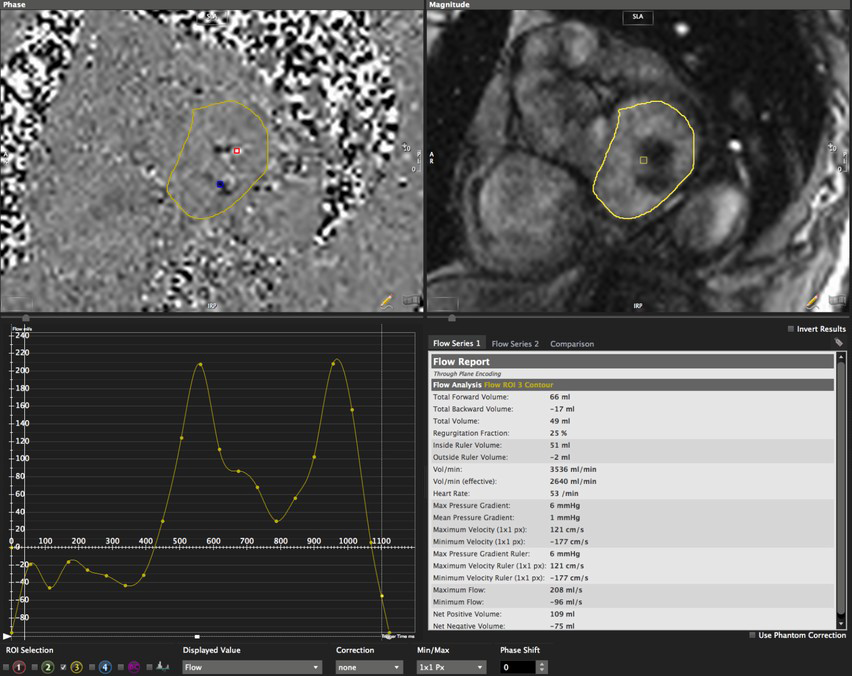 The study was approved by the local Human Research Ethics Board (HREC/13/QPCH/67) and all patients gave written informed consent. Funding was provided by the Richard Slaughter Centre of Excellence in Cardiovascular Magnetic Resonance, the Smart Futures Fellowship Grant (Department of Science, Information Technology, Innovation and the Arts, Queensland Government), and an unrestricted educational grant from Abbott Vascular who had no involvement in the study design, analysis or writing. 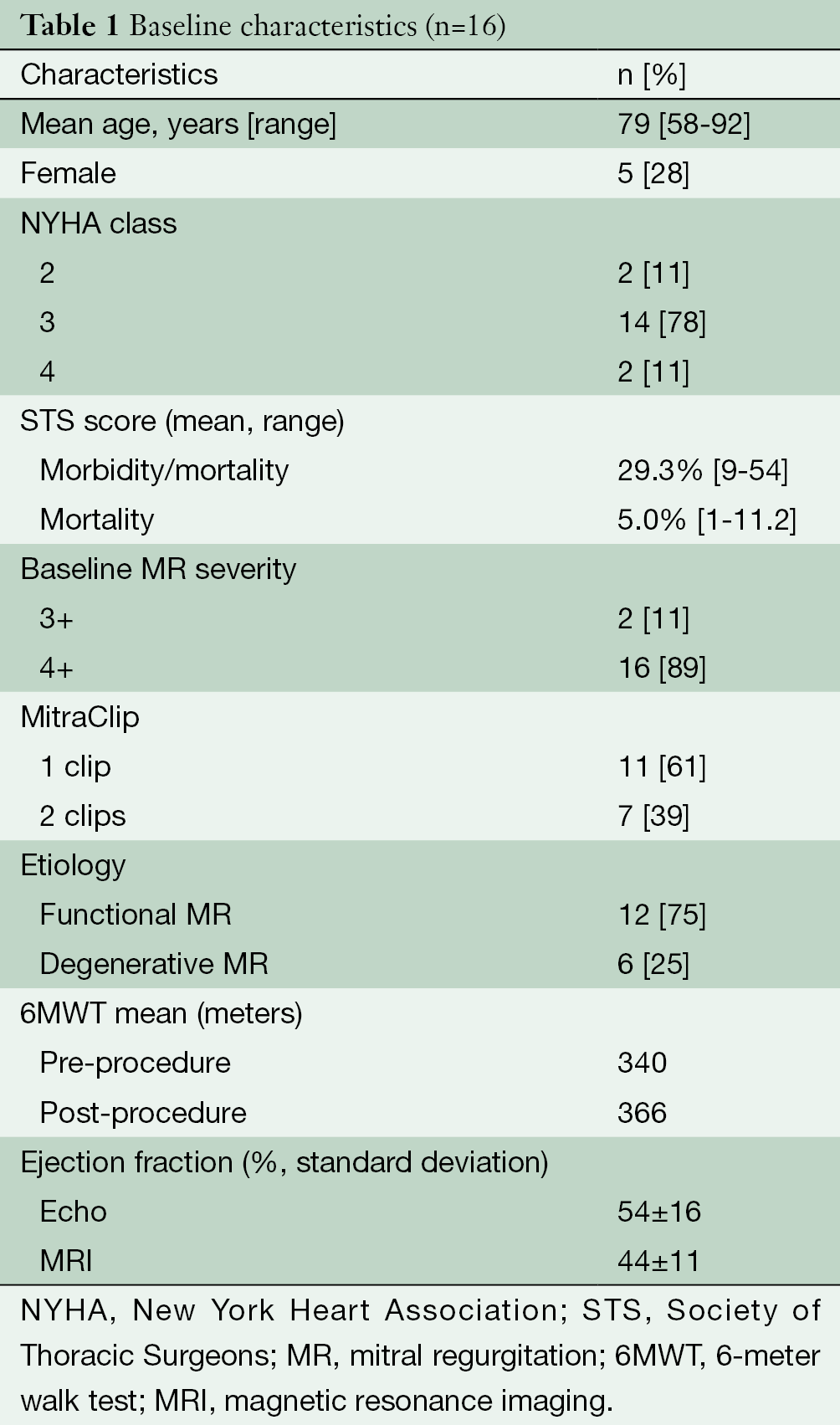 Integrated multiparametric ordinal grading between two expert readers had a CCC of 0.47, Pearson’s P of 0.67, and bias correction factor Cb of 0.70 (Table 2, Figure 4). Quantitative Doppler echocardiography had a CCC of 0.598, Pearson’s P of 0.60, bias correction factor Cb of 0.98, indicating good inter-observer agreement (Table 2). However, the BA analysis showed wide limits of agreement −37.9 to 30.5 (Figure 2) and bias −3.7% (Table 2, Figure 2). In two patients, Doppler echocardiography calculated “negative” regurgitation, despite clear presence of a regurgitant jet on colour Doppler imaging. This occurred when the calculated forward SV through the aortic valve exceeded the ventricular SV, highlighting the challenges of this method. The PISA method was technically unsuitable for mitral regurgitant quantification due to significant artefacts from the MitraClip device(s) obscuring the PISA flow convergence zone, and the presence of multiple regurgitant jets. 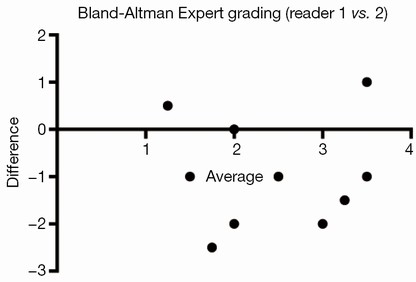 The SV method of CMR (RF%MRI-SV: comparing ventricular SV to aortic forward volume) had excellent correlation between observers (R-square 0.9). However, two patients had nonsensical “negative regurgitation” due to measured aortic flow being higher than left ventricular SV. This is a limitation of the SV technique (both in Doppler echo and CMR), which employs a comparison of two different measurements, each with inherent artefacts. 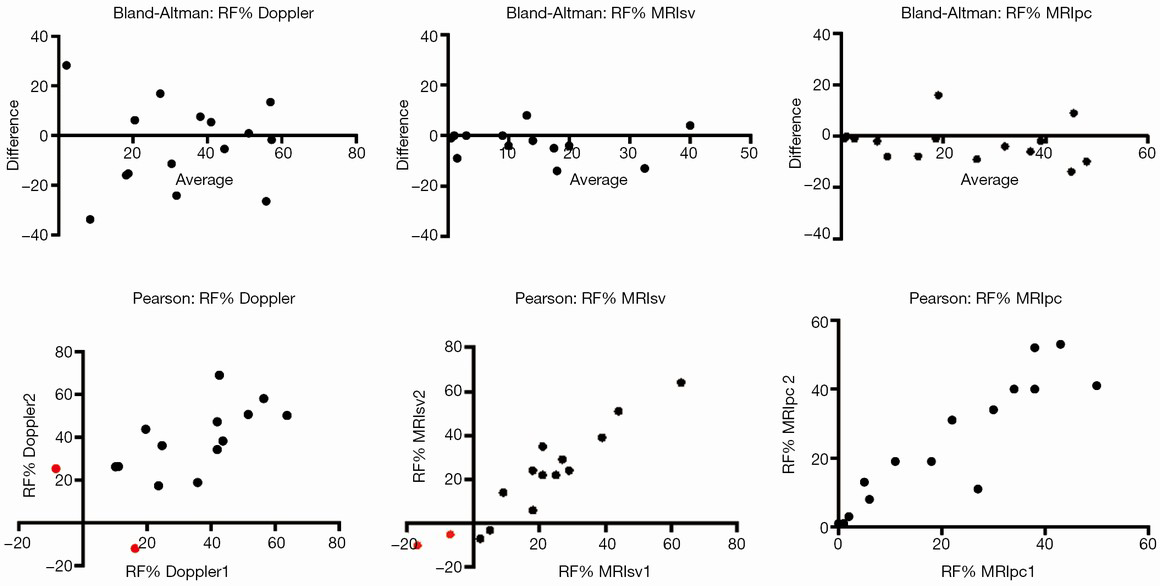 However, in one patient, CMR phase contrast imaging calculated a low regurgitant volume and fraction (11%), despite a significant regurgitant jet (grade 3+) seen on both CMR-SSFP imaging and colour Doppler echocardiography. This patient had a “swinging jet” which, during ventricular systole, changed direction from central towards the lateral wall and atrial appendage, due to systolic prolapse of the mitral valve leaflets and the MitraClip device. In this situation, the MRI-SV technique provided an adequate regurgitant volume and fraction. Thus, it appears that the two different MRI techniques (MRI-SV and MRI-PC) have differing strengths and may be used together. 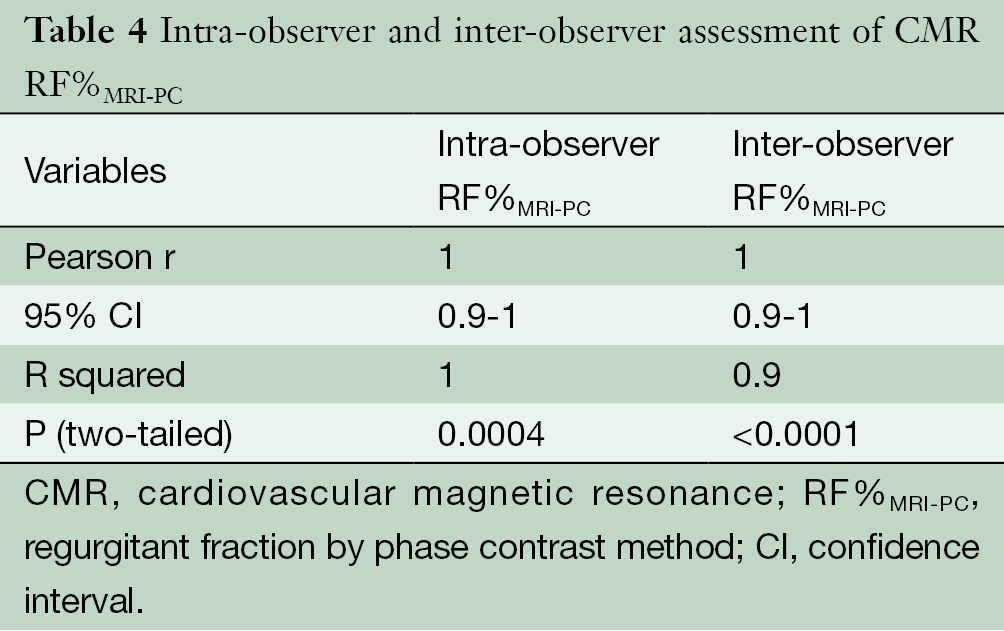 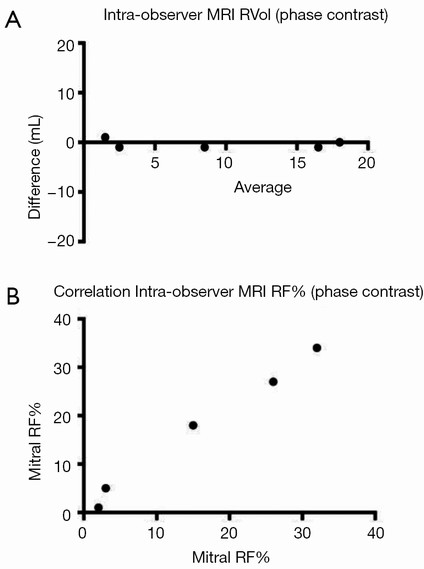 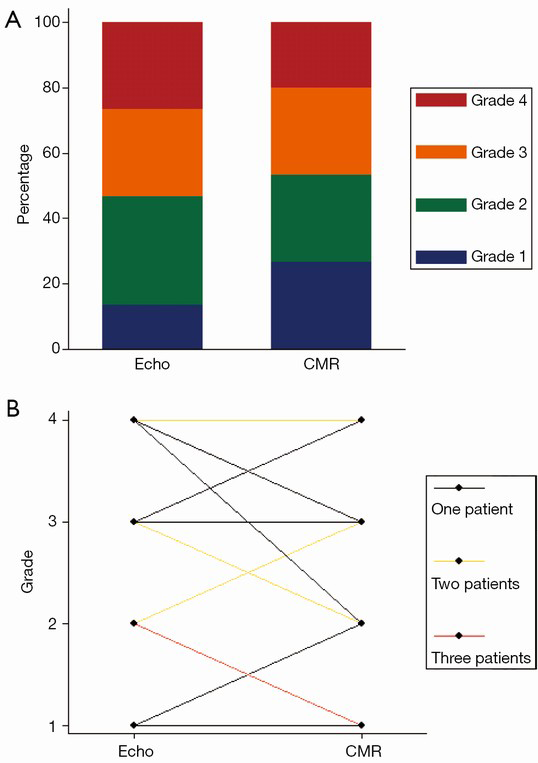 Figure 8 (A) Stacked column of grading by echo and CMR, noting that more cases are graded mild and less graded as severe; (B) crossover plot showing reclassification of grading from echo to CMR. CMR, cardiovascular magnetic resonance.

CMR had superior reproducibility compared to echocardiography for quantification of residual MR after percutaneous MitraClip repair, with lower limits of agreement and superior concordance coefficient (CCC), precision (P) and accuracy (Cb) measurements. A strength of the study is that experienced imaging cardiologists performed both the echocardiographic and CMR analyses. Despite this, only moderate agreement was present between expert readers for the visual assessment of residual MR. This underlines the need for more reproducible, quantitative methods.

Echocardiography is the most commonly used technique to assess valvular regurgitation. However it has significant limitations following percutaneous MitraClip insertion. The double-orifice mitral valve (Figure 1A) typically creates multiple, complex eccentric regurgitant jets. When combined with the artefacts from the clip, assessment of regurgitation by colour and spectral Doppler can be challenging, as illustrated by the lack of agreement between expert readers (Figure 6). The PISA method is a quantitative technique which has prognostic data for native MR (29). However, our data show that this method was not technically suitable after MitraClip repair, due to artefacts from the clips. Quantitative Doppler using comparison of SVs at the LVOT and mitral annular planes is a well-validated technique (28). However, in the present data, both the measurement of the mitral annular dimension and the pulse wave sample volume positioning were hampered by the MitraClip prosthesis and acoustic shadowing, which may have contributed to the reduced inter-rater agreement. Nevertheless, regurgitant fractions by Doppler quantification had substantially improved reproducibility over expert readers’ subjective assessment, which underlines the importance of quantitative metrics over-and-above visual qualitative analysis.

CMR phase contrast imaging provided reproducible measurements of trans-mitral blood flow and regurgitant fraction, with excellent inter-observer agreement (13). CMR was possible in all eligible cases, with no patients abandoning due to discomfort or claustrophobia, a limitation which was reported in other studies (32). However, CMR was not feasible in nine out of 25 patients (36%) due to arrhythmia or non-MRI compatible implanted device, reflecting the common co-morbidities of patients undergoing MitraClip interventions.

The use of CMR to measure mitral regurgitant fractions traditionally has used a comparison of SVs in a similar fashion to Doppler echocardiography, using the MRI “stroke volume” technique (RF%MRI-SV) comparing left ventricular SV, derived from cine CMR SSFP imaging, to the aortic forward SV derived from flow CMR imaging (16,27). This methodology has inherent propensity for error, due to comparison of two different techniques for SV analysis (left ventricular SV calculated from cine CMR images, compared to aortic forward SV from flow CMR data). However, this technique had significant underestimation error in some patients with definite mitral regurgitant jets on Doppler imaging, including nonsensical “negative regurgitation” in two cases.

In addition to this standard MRI technique, we applied a novel technique of placing a specific phase-contrast acquisition plane immediately atrial to the MitraClip, thereby measuring forward and reverse through-plane flow in a single breath-held acquisition. This has the potential advantage of reducing observer error and indeed showed excellent reproducibility between readers. However, one disadvantage of this technique was the patient with a “swinging jet” due to leaflet prolapse, which caused the mitral regurgitant flow to no longer be perpendicular to the phase contrast plane and thus unable to be captured in the through-plane phase contrast measurements.

CMR has long been shown to have superior reproducibility over other techniques, thereby substantially reducing numbers needed for clinical trials (33). The present data suggest that, in the same manner, CMR will be useful to test the efficacy of emerging therapies for MR, paralleling its use in clinical trials for heart failure.

This small study was performed in a single center with considerable expertise in both echocardiography and CMR. These findings may not be generalized to centers with less expertise in quantitative analysis, or different hardware (e.g., high-field 3.0 T CMR may not be suitable due to increased susceptibility artefacts from the MitraClip). Susceptibility artefact from the MitraClips in the basal left ventricular slice may cause difficulty in defining the endocardium, contributing to errors in the MRI-SV method.

Funding: Funding was provided by the Richard Slaughter Centre of Excellence in Cardiovascular Magnetic Resonance, the Smart Futures Fellowship Grant (Department of Science, Information Technology, Innovation and the Arts, Queensland Government #ISF783), and an unrestricted educational grant from Abbott Vascular (with no involvement in the study design, analysis or writing).