Degenerative mitral valve disease is the most common cause of mitral regurgitation. Posterior leaflet prolapse repairs have been standard cardiac surgical procedures for many years. However, each degenerative mitral disease case can show different degrees of myxomatous changes in leaflet redundancy, chordal rupture and/or elongation. Classic quadrangular resection has been considered a reproducible technique, but is also known occasionally to cause systolic anterior motion (SAM) of the anterior leaflet of the mitral valve. This can also happen with triangular resection and artificial chordal implantation, mostly due to pathogenic change of the posterior leaflet height. The aim of the butterfly resection technique is to optimize the geometry of the resultant new leaflet, with controlled height reduction for each segment in a targeted approach without annular reduction (1). Prolapsing posterior leaflet segments exhibit various degrees of redundancy both in width and in height. Any design for appropriate resection should take account of the degree of redundancy in both dimensions. The goal of butterfly technique is to create an even, symmetrical coaptation zone at a safe distance from the ventricular septum (2). We believe that direct measurement of the height of each segment helps us design the appropriate shape of butterfly resection. The present article describes the step-by-step technical details of performance of a butterfly resection and demonstrates its results, advantages and caveats.

Transesophageal echocardiography (TEE) is introduced for all mitral valve repair patients after induction of general anesthesia. We routinely and thoroughly assess the mitral valve leaflets, subvalvular apparatus, left ventricle and regurgitant jet prior to the mitral repair procedure. The cardiopulmonary bypass is instituted with aortic and bicaval cannulation. Cold blood cardioplegia is administered both in antegrade and retrograde fashion every 20 min during aortic cross clamping. Adequate exposure of the mitral valve and subvalvular apparatus without distorting the left ventricle is crucially important for good mitral valve repair.

Prior to a water test, each component of the mitral valve is checked, step-by-step: the anterior leaflet, posterior leaflet, chordae tendinea, anterolateral and posteromedial papillary muscles, and left ventricle. At this point, we measure the heights of four segments (A2, P1, P2 and P3) of leaflets perpendicularly from the mitral annulus using a small paper scale. A water test confirms the location of any leaflet prolapse (Figure 1). When the prolapsing segment in the posterior leaflet is redundant and high (higher than 15 mm), we employ butterfly resection for that redundant prolapsing segment. As a degenerative mitral valve always has some deformed redundancy both in width and in height (Figure 2), butterfly technique is appropriate in approximately 75% of prolapsing posterior leaflet cases. 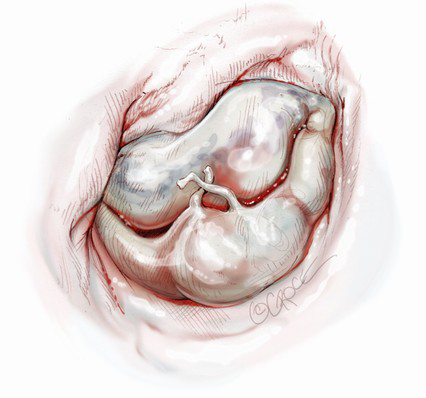 Figure 1 A middle segment of the posterior leaflet (P2) shows prolapse with ruptured chordae with an initial water test, and leaflet tissue has redundancy. 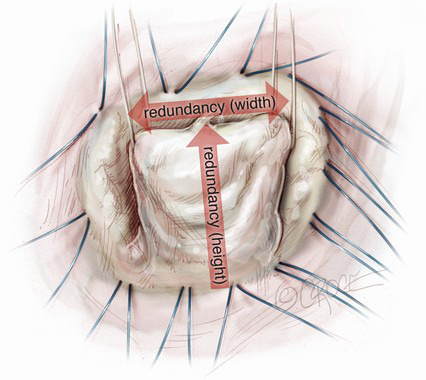 Figure 2 Leaflet tissue redundancy is commonly observed both in width and in height with degenerative mitral valve regurgitation.

How to design and perform butterfly resection

Before starting leaflet resection, we measure and mark the incisional lines so as to design the remnant leaflet tissue with appropriate height at each side as demonstrated in Figures 3-7. By holding a small paper scale next to the leaflet, we mark the appropriate length (typically 15 mm for P2, 12-15 mm for P1 and P3) to set the intended height of the resulting leaflet. It is crucially important throughout the resection to foresee the height and shape which will be created using the tissue which will remain on each side; in other words, one cut only in order to create. 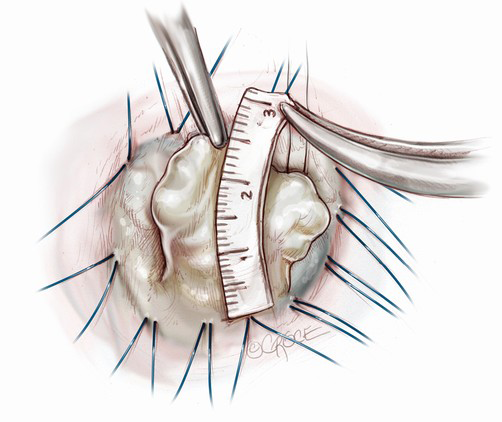 Figure 3 We measure the height of prolapsing P2 segment. When it is higher than 15 mm, we employ butterfly resection. 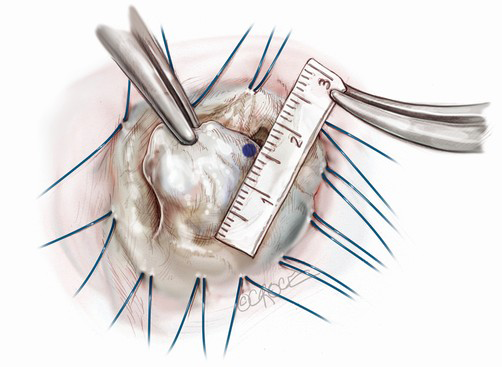 Figure 4 We mark the appropriate length (typically 15 mm for P2) of cut margin as well as of remaining side parts of leaflet tissues, to set the intended height of the resultant leaflet. 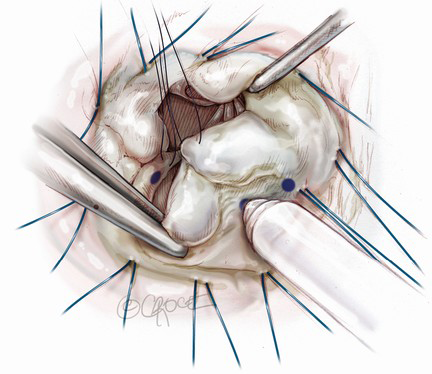 Figure 5 We use a marker pen to mark the design for each leaflet component. 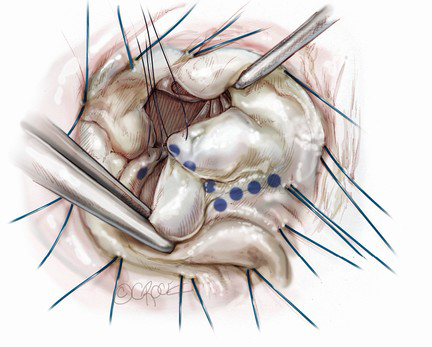 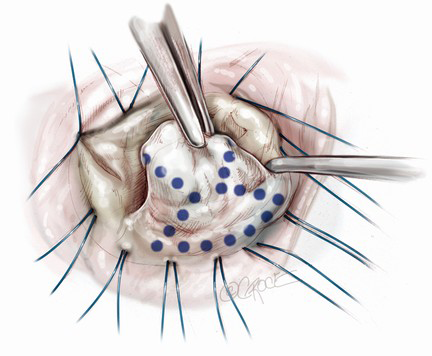 Figure 7 A butterfly design is completed to demonstrate as a shallow triangle at the free margin combined with a reverse triangle with its base at the annulus.

Subsequently, resection of the leaflet segment is carried out using a number 11 bladed knife or scissors (Figure 8). The conserved margins of leaflet are then rotated toward the annulus and secured with two knots of a 5-0 polypropylene suture (Figure 9). The free corners of the cut leaflet are then brought together and secured, at least temporarily, with another suture in figure-of-eight style. At this point, we confirm the shape of leaflet bulging and line of coaptation formed close and parallel to the posterior annular line, with a water test (Figure 10). If we notice unnatural bellowing of a new segment or an uneven coaptation line, it can safely and easily be revised with an additional cut. When we are satisfied with the geometry of the new leaflet and the location of coaptation, the cut edges already approximated to the annulus are then sutured to the annulus, using the free end of the first suture, in over-and-over fashion. 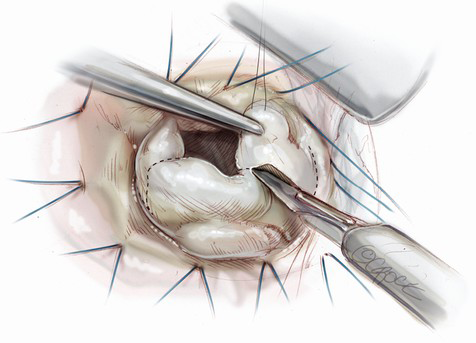 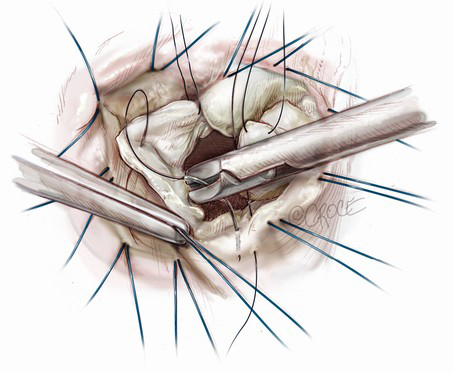 Figure 9 The conserved margins of leaflet are then rotated toward the annulus and secured at least temporarily with two knots of a 5-0 polypropylene suture. 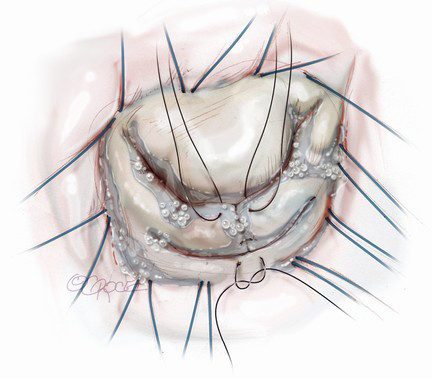 Figure 10 After temporary knot of another 5-0 polypropylene figure-of-eight suture in the free corners of the cut leaflet, we confirm the shape of leaflet bulging and line of coaptation form close and parallel to the posterior annular line, with a water test.

Completion and assessment of coaptation

The repair is always completed with a complete ring annuloplasty (Figure 11). We choose a Carpentier Physio II Annuloplasty Ring (Edwards Lifesciences, Irvine, CA) to fit the true size of the anterior leaflet, especially its height at A2. In each step, the water-test is repeated to check the overall leaflet appearance and the location of the coaptation line. What is important is not only the good gross appearance and non-regurgitant new valve form, but also confirmation of the coaptation zone created by the repair. An ink test is always carried out to make sure of an even and adequate coaptation area (Figure 12). Usually we regard 7-10 mm in the vertical depth of the coaptation zone as adequate, however, over 15 mm as inappropriate due to increased risk of SAM. 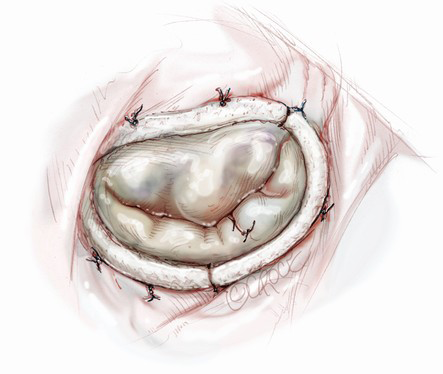 Figure 11 The repair is completed with a Carpentier Physio II Annuloplasty Ring to fit the true size of the anterior leaflet, especially its height at A2. 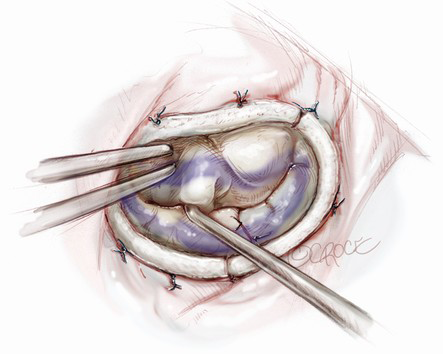 Figure 12 An ink test is used to confirm an even and adequate coaptation area throughout between two commissures.

Confirmation of the repair

The cardiopulmonary bypass is weaned off after we close the left atriotomy with adequate volume filled in the left ventricle and minimal dose of inotropic support. Assessment by TEE is crucial to detect any residual leakage through the repaired mitral valve or abnormal motion of the anterior leaflet toward the ventricular septum during systole (Figure 13). We consider a second procedure for revision of the repair if we find SAM and/or more than 1 cm2 of regurgitant jet mosaic pattern by color Doppler mode of TEE. However, we have found a second procedure necessary in less than 3% of the whole series. With the butterfly technique, the distance between the coaptation and the ventricular septum becomes adequately long, and allows the anterior leaflet adequate excursion in the posterior direction. 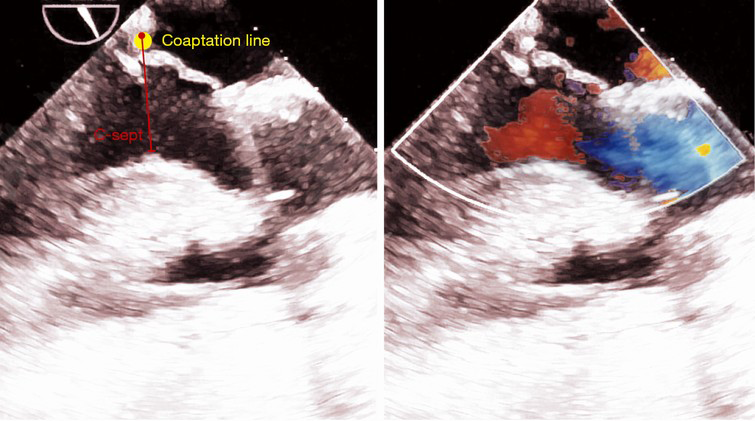 Figure 13 After cardiopulmonary bypass terminated, TEE revealed not only disappearance of mitral regurgitation but also adequately long distance between coaptation to septum (C-sept) in a long-axis view. TEE, transesophageal echocardiography.

Chronic mitral regurgitation with a prolapsed leaflet lesion is mostly associated with leaflet redundancy, and its degree varies considerably among patients (3). That redundancy occurs both in width and in height (Figure 2). Therefore classic resectional techniques, such as quadrangular resection and triangular resection, occasionally do not solve the morphological problem in degenerative deformities. The double benefit of butterfly technique is the correction of redundancy, creating appropriate morphometry in the resultant leaflet, but without annular reduction. Furthermore, the step-by-step approach described here prevents excessive resection of the leaflet tissue, generally feared by proponents of non-resectional repair.

A concern common to all resection techniques, including butterfly technique, is excessive resection. If too much tissue is removed, insufficient area in the remaining leaflet tissue might cause reduced area of coaptation and possibly opening of inter-segmental clefts. The butterfly technique is most safely performed with a step-by-step approach, relying on direct measurements of leaflet segmental heights. Fine adjustment is possible by securing the free corners of the cut leaflet temporarily, performing a water test, and making adjustments if shown necessary by the water.

We are aware that this resection technique not only optimizes the leaflet morphology but also brings the leaflet down toward the left ventricular cavity. However, this effect, the curtain effect, is counteracted by the pathological leaflet redundancy, and each step is visually confirmed by the water test. We believe that this “leaflet optimization” by butterfly technique creates an ideal three-dimensional geometry in each mitral valve leaflet for whatever degree of degenerative deformity.

The goal of butterfly technique is to create adequate leaflet coaptation zone in the appropriate location. We routinely complete the repair with an ink test, which clearly reveals the zone of coaptation, not clearly seen by a water test alone. The coaptation zone is generally thought by many surgeons to be “the deeper, the better”, but we strongly believe that this is not the case. Excessively long anterior leaflet tissue below the coaptation line in the left ventricle is one predisposing factor of SAM in some cases, especially with a small ventricle and a narrow left ventricular outflow. The coaptation line should be formed close to the posterior part of the annulus with adequate but not excessive redundant anterior leaflet tissue below the line.

The mitral annulus in degenerative mitral valve disease has also been reported to be abnormal. In some cases, it has been found considerably dilated, flattened and circular. Moreover the anterior portion of the mitral annulus is generally found to be quite dilated in degenerative disease (4). We should be aware that a Carpentier’s type II lesion is predominantly associated with a global annular dilatation to some degree. The butterfly technique is therefore appropriately completed with a full annuloplasty ring to restore the mitral valve morphology, and early and medium-term outcomes have proven excellent (3).

A quite specific advantage of the butterfly technique is its focus on each diseased segment. We have experienced more than a few cases with multiple prolapsed segments, and these cases were simply treated by employing multiple butterfly resections. Conventional sliding leaflet technique is not easily applicable for multiple prolapse pathology. One caveat is to reserve the butterfly technique for appropriate cases only. It is not appropriate for a thin short prolapsing leaflet segment with no excess tissue. In contrast, a prolapsing posterior leaflet with a height greater than 15 mm is a safe indication and the outcome is satisfactory.

In summary, the butterfly technique is a method of combining controlled height-reduction and prolapse elimination, and offers advantages as a new standard resection method. We believe it is a valuable technique for every cardiac surgeon’s toolbox.