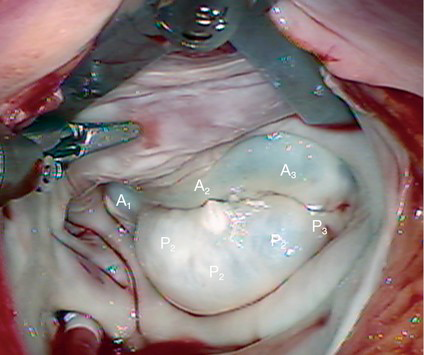 Figure 2 A saline pressure test shows the actual size and level of prolapse of the entire P2 scallop. It is obvious that either a large triangular or quadrangular resection would render the remaining tissue inadequate to subtend the repair gap.

Posterior leaflet pathology with a dilated annulus is present in 80% of patients with degenerative mitral insufficiency. Most surgeons consider that posterior leaflet prolapse, with or without ruptured chords, to be relatively easy to repair compared to anterior leaflet repairs. Nevertheless, posterior leaflet disease can be challenging in the presence of variable segment ‘scallop’ size, shape and degree of prolapse. This is especially true when a very large P2 scallop subtends the majority of the posterior annulus and is associated with diminutive P1 and P2 segments. In some instances, P2 can be as long as the A2 segment (>3 cm). A repair that does not shorten the P2 scallop confers a higher risk of developing systolic anterior motion (SAM) of the anterior leaflet, causing outflow tract obstruction with dynamic mitral insufficiency. A classic quadrangular or triangular resection can render the valve irreparable because of inadequate remaining tissue for adequate coaptation. The ‘haircut’ method reduces leaflet prolapse, shortens P2, preserves the annular-leaflet junction and provides a uniform line of coaptation.

After the patient has been anesthetized and intubated, a detailed 3-D transesophageal echocardiographic study is performed and reconstruction models are made. Each echocardiographic segment of the pathologic mitral valve is measured meticulously for length, width and level of prolapse. Moreover, the aortic-mitral plane angle is determined as is the distance between the coaptation point and ventricular septum. This information gives us an idea of which repair technique to employ in order to achieve the best repair and avoid SAM. Subsequently, external defibrillator patches are placed and a pulmonary artery pressure catheter is inserted via the right internal jugular vein. A juxtaposition superior vena caval venous drainage cannula is placed using the ‘double-stick’ technique.

Most often, we use either the robotic or minimally invasive mini-thoracotomy approach for mitral valve repairs. However, the ‘haircut’ repair technique is equally applicable using a full or hemi-sternotomy.

A large prolapsing P2 should be shortened to approximately 2 cm and supported adequately by reduced chordal lengths. Some surgeons prefer not to resect and instead use polytetrafluoroethylene (PTFE) neochords to flatten the elongated P2 scallop into the ventricle. This technique renders the posterior leaflet relatively immobile. Alternatively, a posterior leaflet-plasty can render excellent results and maintain leaflet mobility.

Figure 1 shows a mitral valve with a very large, lengthy P2 scallop. Either redundant or ruptured chords result in a large anteriorly directed flow jet. Because of deep indentations on both sides, there is often a P2 ‘independence’, which does not provide adjacent P1 and P3 chordal support. Thus, maximal stress is placed on chords supplying P2. In this instance, a complete P2 resection can create an annular gap that is impossible to close and a small P1 and P3 preclude performing a leaflet sliding-plasty to fill the defect.

The redundant, large P2 segment is best evaluated using ventricular saline pressure filling (saline test) (Figure 2). The height (length from annulus) of P1 and P3 are used to guide the ultimate length of the remaining P2 segment. The end of P2 is resected horizontally (by the ‘haircut’ technique) to approximate the length of P1 and P3 (Figure 3). Any stable chords of good quality attached to P2 are identified and preserved along with a small leaflet segment. We propose three scenarios to reconstruct P2 during the leaflet-plasty.

Figure 3 (A) P2 is being divided (by the ‘haircut’ technique) along the pre-measured line determined from prior linear measurements; (B) P2 has been almost completed divided. This illustration shows residual chords that will be reattached along the coapting edge of P2. By swinging the natural chords more medially, the new angle reduces P2 to the level of the other scallops.

In the presence of a widely flail, large P2 from a great number of ruptured chords, this technique works well (Figure 4A) (3). As seen in Figures 3,4B, the tip of P2 is divided horizontally using the height of P1 and P3 as a comparative guide. Thereafter, intact primary or secondary chords are reimplanted along the ‘new’ edge of P2 (Figure 4C). By bringing more lateral primary chords toward the center of P2, any residual prolapse becomes reduced. At this time, ‘clefts’ between P1 and P2 or P2 and P3 can be closed, adding additional chordal support to P2. An appropriately sized flexible annuloplasty band or ring have been implanted in all of our mitral repairs using interrupted 2-0 braided mattress sutures (Figure 4D). Currently, to save cardiac arrest time and provide a secure band attachment, we use the Cor-Knot™ suture-fastening device (LSI Industries, Inc., Victor, NY). The band shortens the posterior annulus and displaces it anteriorly, creating greater leaflet coaptation. A final coaptation surface of 8-10 mm is ideal. A saline test should be done to demonstrate both valvular competence and P2 prolapse reduction. 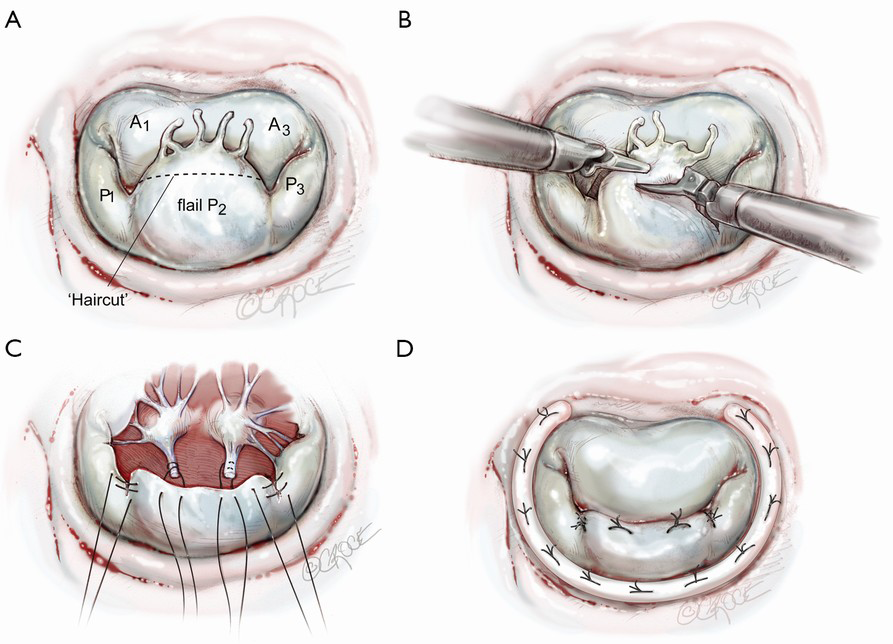 Figure 4 (A) A large P2 scallop has multiple ruptured chords along the coapting edge; (B) as also seen in Figure 3A, the distal tip of P2 is resected along the pre-measured line. Renders P2 the same height from the annulus as P1 and P3; (C) saved chords are mobilized and implanted along the leading edge of the ‘haircut’ line. In addition, large clefts or smaller indentations to be sutured closed. Thereafter, adequate coaptation with the anterior leaflet is determined by the saline test; (D) finally, either a flexible annuloplasty band or complete ring is implanted, trigone to trigone. Recently, we have been using the Cor-Knot™ device for rapid, solid fixation of the prosthesis.

When only a few central P2 chords are ruptured and redundant but good edge chords are present, the ‘box haircut’ technique may be used (Figure 5A). A central P2 rectangular segment is removed to the desired length, leaving a leaflet segment on each margin with residual functional chords (Figure 5B). These edge ‘tissue-chord flaps’ are transferred to the center of the P2 resection and attached with 4-0 polypropylene sutures (Figure 5C,D). Even if these chords are elongated, alteration of the papillary-chordal attachment angle, during movement toward the resected center, will affect P2 prolapse reduction. As in scenario 1, an appropriately sized annuloplasty prosthesis should be implanted before the valve is tested by saline pressure. 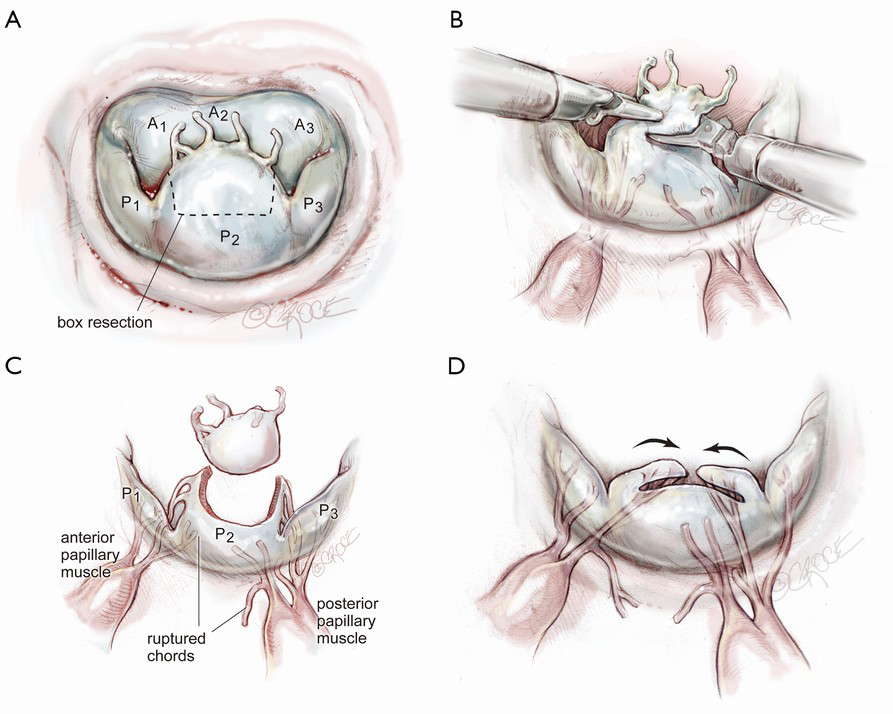 Figure 5 (A) This ‘box haircut’ technique can only be applied when there are good residual chordae along the P1 and P3 edges of P2. A ‘box cut’ is made in the distal end of P2, preserving the good chord-bearing edges; (B) this illustration shows the good chords attached to the residual ‘flap’ tissue along the lateral edges of distal P2; (C) the residual ‘flaps’ are transferred to the middle of the incised distal P2 tip. This maneuver pulls residual chords medially. The new attachment angle to the papillary muscles reduces any prolapse to the same coaptation level of P1 and P2; (D) the moved tissue flaps with attached chordae are then sutured to the cut end of P2. This completes the leaflet repair. Thereafter an annuloplasty band or ring is implanted as shown in Figure 4D.

Instead of chordal reimplantation or edge chord transfer, some surgeons may prefer to place neochords between a corresponding papillary muscle and the new P2 leaflet edge. As mentioned before, many surgeons never resect any of prolapsing P2 and implant neochords, pulling the leaflet well into the ventricle. The mobility of the posterior leaflet is dampened by this latter technique. The haircut-neochord method maintains better P2 mobility. The tip of P2 is once more resected as in scenario 1 (Figure 6A). Thereafter, a 4-0 or 5-0 PTFE neochord is passed through the fibrous tip of the corresponding papillary muscle and then through the amputated edge of the P2 leaflet. It is then looped around the edge and passed back through the cut leaflet (Figure 6B,C). This creates a secure locking loop. The chord length is then adjusted to match an adjacent natural chord. At least two pairs of neochords are necessary for adequate P2 support (Figure 6D). Before tying the neochords onto the leaflet, a saline test should be done to confirm adequate coaptation with the anterior leaflet. By placing either a removable vascular clip or a right-angle clamp at the leaflet surface, PTFE slippage during tying can be avoided. After confirming a good repair, an annuloplasty prosthesis should be implanted. 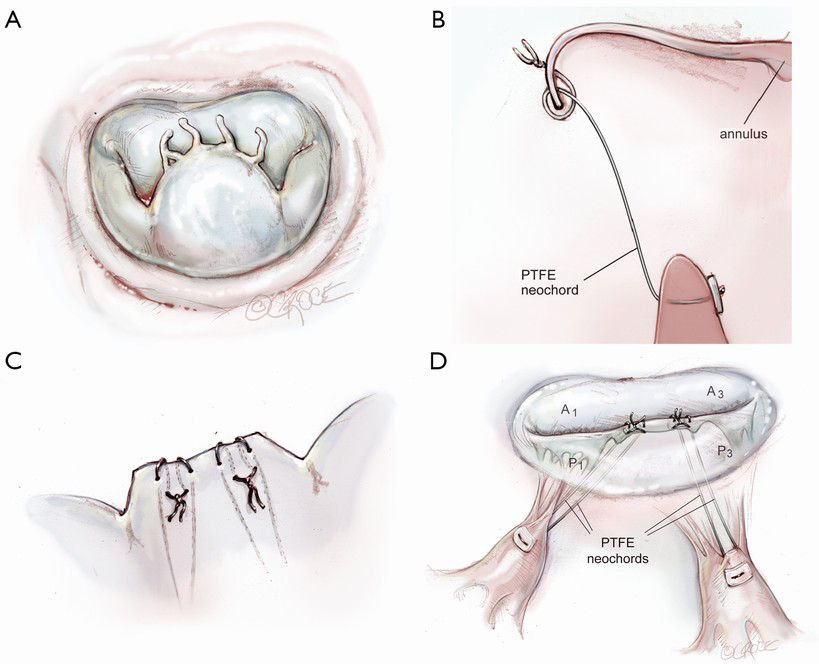 Figure 6 (A) The pre-measured distal end of P2 is resected as seen in Figure 3; (B,C) a pledgeted 4-0 or 5-0 PTFE suture is passed through the fibrous head of a corresponding papillary muscle. The two arms of the suture then are passed through the amputated edge of P2. They should come through the leaflet 2-3 mm from the edge and spaced about the same distance apart. Thereafter, both sutures are looped around the edge of P2 and back through the leaflet. This creates a locking loop, which can be adjusted using the saline test, to determine the correct neochord length. The PTFE suture pair is then tied. Several neochord pairs should be used to support the entirety of P2; (D) this illustration shows the final placement of two sets of neochords. Chords should not pass from a papillary muscle across the leaflet midline. Finally, an annuloplasty band or ring should be implanted as in Figure 4D.

We have performed 102 haircut mitral valve repairs between March 2006 and October 2014 and have found that this technique preserves annular integrity, while providing excellent reduction of the posterior leaflet. This is especially important when P1 and P3 are small and a large P2 resection would result in inadequate radial approximation of residual leaflet segments. To date, we have had one late repair failure when using this method. Pitfalls include over-resection of P2 or restrictive chordal transfer to the center of P2, causing residual mitral insufficiency (Type III). The length of the residual P2 leaflet should approximate P1 and P3 lengths.

We have many more options than Dr. Alain Carpentier first espoused in his classic paper—the French Correction [1983] (4). In 1986, I was fortunate to learn directly from this master surgeon at Hôpital Broussais in Paris. At that time, large quadrangular leaflet resections were the vogue, followed by annular defect plication. We shortened elongated chords by ‘dunking’ them into a ‘trench’ created in a papillary muscle. One had to estimate the trench depth and be sure that secondary leaflet restriction did not occur. Large sliding-plasties were necessary for correcting commissure prolapse as well as large redundant posterior leaflets. We were taught not to resect any part of the anterior leaflet but to transfer chords to reduce a prolapse. The ridged complete annuloplasty ring was all that was available. Transesophageal echocardiography had not been developed and visual assessments alone guided our operations.

All of these techniques worked to repair mitral valves but the complexity precluded many surgeons from adopting these techniques as only master surgeons seemed to be successful. Today, our toolbox of techniques for mitral repair is more diverse than ever. Some surgeons will call these repair simplification methods; however, most make good engineering sense. We now use strong PTFE to replace weakened native chords. Leaflet folding-plasties are easier to perform than multiple resections and can form proper coaptation surfaces. Small triangular resections of the anterior and posterior leaflets have replaced large resections. Leaflet sliding-plasties are used much more sparingly. Annuloplasty prostheses are flexible, helping to retain normal ventricular kinetics.

Many of these modern techniques attempt to preserve both leaflet-annular junction integrity and bileaflet mobility. When a giant prolapsing P2 segment exists, any surgeon who thinks that posterior leaflet repairs are a ‘snap to perform’ melts into despair when too much of it has been resected. The ‘haircut’ posterior leaflet-plasty, described herein, maintains leaflet motion, prevents over-resection and reduces the risk of failure from leaflet-annular dehiscence. This is a helpful method when significant basal P2 segment calcium is present and either quadrangular or deep triangular resections are ill-advised.