Single-port thymectomy (SPT) with a subxiphoid approach is indicated for anterior mediastinal tumors and myasthenia gravis when preoperative diagnostic imaging reveals no tumor infiltration into the surrounding tissues, such as the brachiocephalic vein and pericardium. The present case is a 42-year-old female patient who had an incidental finding of an anterior mediastinal cystic mass during follow-up of asthma. The mass was 1 cm in diameter and did not infiltrate into nearby organs (Video 1). 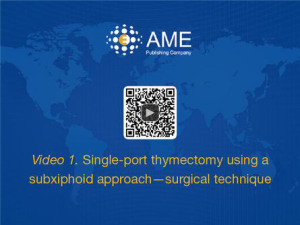 With the patient in the supine position, SPT was performed with the surgeon standing between the patient’s legs and an assistant standing on the patient’s right ride to operate the camera. Differential lung ventilation was not necessary. A 30-degree, 5-mm ridged camera scope was used. When using a 5-mm camera scope, the safety of the surgery should be ensured by selecting an instrument that has sufficient lighting to prevent the operative field from darkening. The use of a long-length scope can prevent interference between the camera head and the surgeon’s hands (Figure 1). 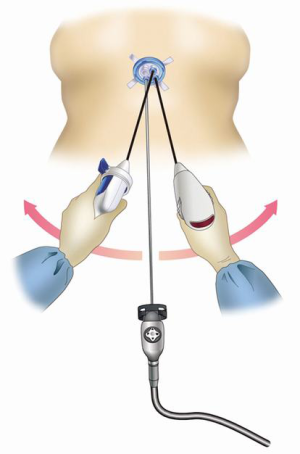 Figure 1 Use of the long camera scope reduces interference between the surgeon’s hands and the camera head.

First, a 3-cm transverse incision was made 1 cm caudal to the xiphoid process. After blind detachment of the sternum using a finger, a 0.5-cm longitudinal incision was made on the fascia of the rectus abdominis to create enough space to insert a GelPOINT mini advanced access platform (Applied Medical, Rancho Santa Margarita, CA, USA) for single incision surgery. If the skin incision is made too close to the xiphoid process, it becomes difficult for surgical instruments, such as vessel sealing devices, to reach the posterior aspect of the sternum. In such a scenario, the thymus may be separated from the sternum using roticulator scissors with a flexible tip. 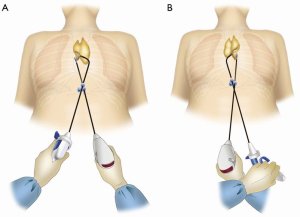 The resected thymus was placed in a widely opened pouch in the mediastinum and allowed to gravitate towards the bottom of the pouch, which was then retrieved through the subxiphoid incision. A 20-Fr drainage catheter was inserted through the same opening into the anterior mediastinum before completion of the surgery.

The length of operation was 123 minutes and blood loss was minimal. No complications occurred during or after surgery, and the patient was discharged from hospital four days after surgery. Thymic cyst was diagnosed based on pathological findings.

In recent years, minimally invasive approaches have replaced conventional median sternotomy in thymectomy for thymoma or myasthenia gravis (1). The lateral thoracoscopic approach that is most commonly used in many institutions has several drawbacks, including difficulty in identifying the contralateral phrenic nerve and ensuring a sufficient operative field in the neck region. The lateral thoracoscopic approach is also associated with postoperative pain and numbness due to intercostal nerve impairment caused by incisions made in the intercostal space. Because the camera is inserted along the midline of the body, SPT (2), in contrast, provides a sufficient operative field in the neck region and makes the identification of both phrenic nerves easy. In addition, the SPT does not involve the intercostal space, thereby avoiding intercostal nerve damage. Furthermore, SPT is aesthetically excellent and minimally invasive as only a single 3 cm incision is made on the abdomen.

One of the drawbacks of SPT is poor surgical manipulability because surgical instruments inserted in a single port interfere with each other. Therefore, we do not recommend SPT for cases requiring sophisticated surgical manipulation, such as those with tumor infiltration into the phrenic nerve, pericardium, or brachiocephalic vein, for which dual-port thymectomy (3), trans-subxiphoid robotic thymectomy (4), or median sternotomy is performed. Despite intercostal nerve impairment caused by the insertion of the robotic arm through the intercostal space, trans-subxiphoid robotic thymectomy is particularly valuable because the camera inserted via the subxiphoid incision provides a sufficient operative field in the neck region and enables identification of both phrenic nerves, as in median sternotomy. Moreover, robot-assisted surgery provides excellent surgical manipulability, making it extremely useful.