Patients who undergo surgery for ischemic cardiomyopathy or infectious endocarditis often require concomitant intervention for coexistent mitral regurgitation. Such patients present unique opportunities for exposure and treatment of the mitral valve via alternative, less conventional approaches. Although the left ventriculotomy performed during ventricular aneurysm repair or ventricular assist device implantation provides an excellent view of the mitral valve, it is rarely used for mitral valve surgery. Similarly, the mitral valve is clearly visualized through the aorta after thorough debridement for aortic valve endocarditis. However, in such situations mitral valve surgery is still performed via left atriotomy or transseptally. We have previously reported a handful of series where a transventricular approach was utilized to surgically correct mitral regurgitation at the time of surgical ventricular restoration, repair of ventricular pseudoaneurysms, or implantation of a left ventricular assist device (1,2). We have also described transaortic repair of the mitral valve and aortomitral continuity during intervention for endocarditis (3,4). Each exposure facilitates mitral valve repair, although the standard repair procedures must be modified to accommodate these non-traditional exposures. Here, we detail the technical considerations required to perform transventricular and transaortic mitral valve repair, as well as discuss the advantages for employing these unconventional approaches.

Transesophageal echocardiographic assessment of the mitral valve is performed following induction of general anesthesia. For both alternative approaches, the patient is typically positioned supine for median sternotomy. Cardiopulmonary bypass is then instituted via cannulas in the right atrium and ascending aorta; bicaval cannulation is not necessary for these approaches. A left atrial vent is positioned through the right superior pulmonary vein. The transventricular approach may also be performed through a left anterior thoracotomy with peripheral vessel cannulation for cardiopulmonary bypass. 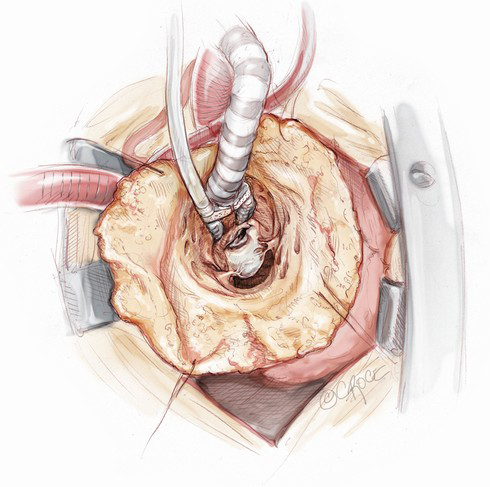 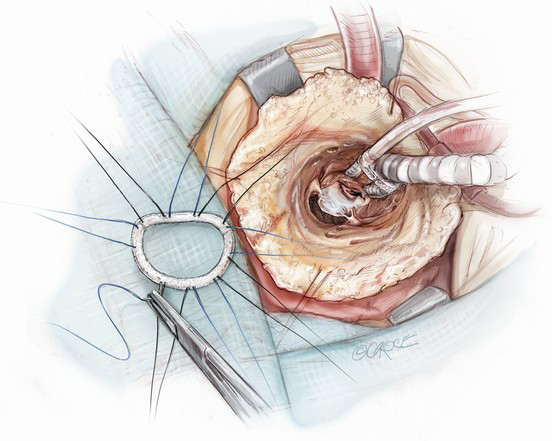 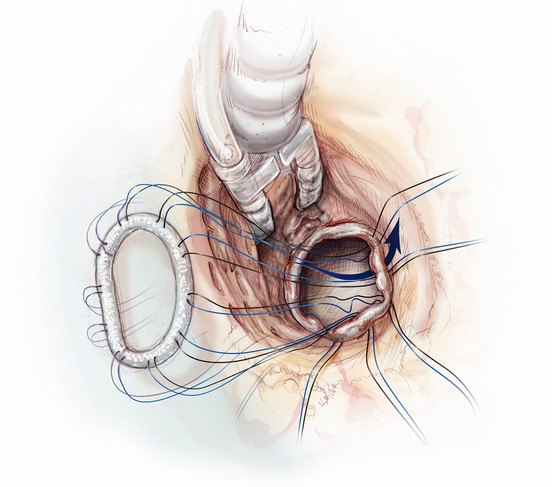 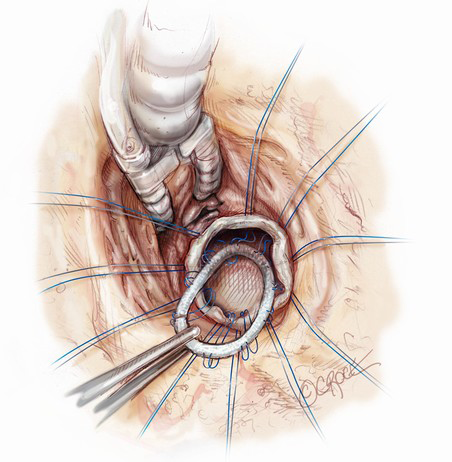 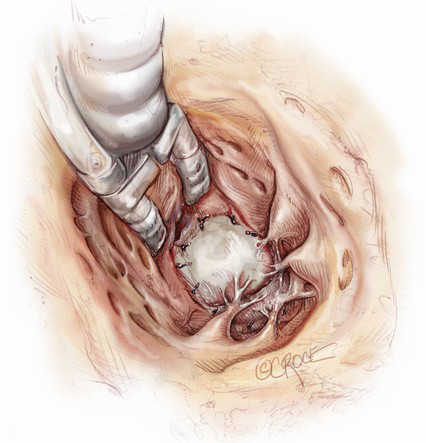 Figure 5 Annuloplasty sutures are tied with the knots resting the ventricular side of the annulus.

In our experience, this approach has been reserved for cases of aortic and mitral valve endocarditis. Therefore, adequate debridement of infected and necrotic tissue is paramount and this often includes the aortomitral continuity. If the mitral valve has not undergone irreparable damage, a repair can be attempted, particularly if the patient is young. The mitral valve should be well visualized through the aortic annulus following widespread debridement and excision of the aortic valve or infected prosthesis (Figure 6). Repair begins with placement of annuloplasty sutures in the posterior mitral valve annulus (Figure 7). The anterior annulus is approached differently; annuloplasty sutures are first placed in a reverse fashion through the annuloplasty ring and placed on hemostats. The posterior annuloplasty sutures are then passed in a standard fashion through the posterior aspect of the annuloplasty ring. The ring is positioned in a supra-annular fashion and the posterior annuloplasty sutures are tied, leaving the anterior annuloplasty sutures emanating from the ring without an anchor to cardiac tissue (Figure 8). If the aortomitral continuity has been resected during debridement, the defect can now be repaired with a pericardial patch. At the appropriate positions, the reversed anterior annuloplasty sutures are then placed through the corresponding position on the pericardial patch, thereby recreating the aortomitral continuity (Figure 9). The remaining portion of the pericardial patch can then be sewn to the anterior leaflet of the mitral valve to restore the leaflet size and ensure coaptation (Figure 10). In the event of torn or resected chordae, an artificial neochordoplasty can be easily performed as transaortic visualization of the papillary muscles is excellent. The artificial neochord should be sized in comparison to other normal chordae. With this technique, it is not possible to test mitral valve competency before separating from cardiopulmonary bypass. Once the repair is complete, the aortic valve or aortic root, if necessary, can be replaced with standard techniques followed by aortotomy closure. Cardiopulmonary bypass is weaned, a complete transesophageal echocardiographic examination is performed, and the chest is closed. 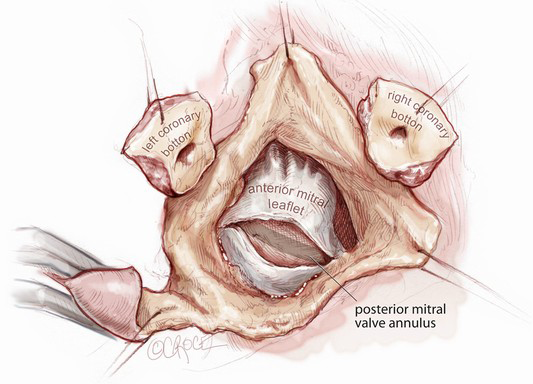 Figure 6 Following debridement of infected tissue, the mitral valve is easily viewed through the aorta. 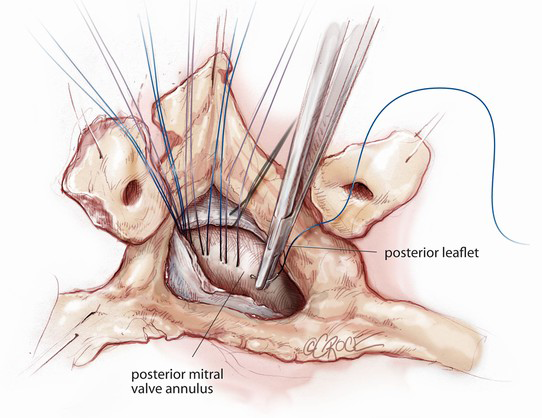 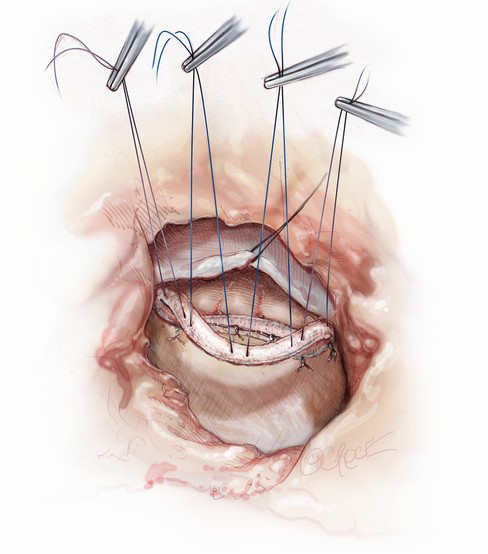 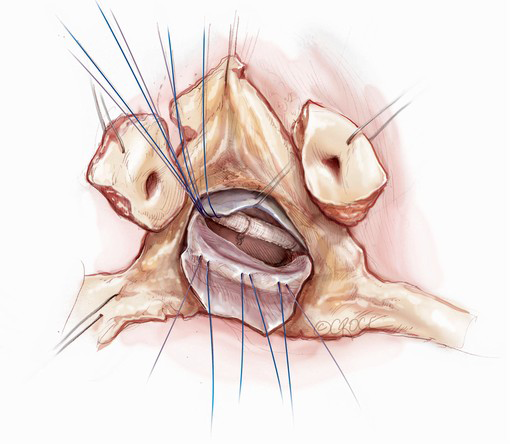 Figure 9 The annuloplasty sutures in the anterior ring are brought through the pericardial patch to reconstruct the aortomitral junction. 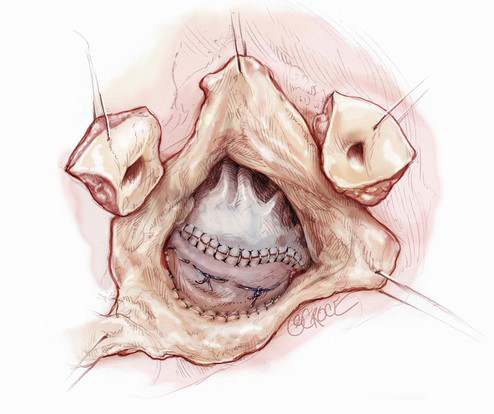 Figure 10 The pericardial patch is sewn to the coapting portion of the anterior mitral leaflet to complete the reconstruction of the mitral valve.

The growing complexity of cardiovascular operations and reoperations, coupled with the increasing popularity of less invasive surgery, often requires surgeons to employ less traditional exposures and techniques. The present article describes two efficient, unconventional approaches for mitral valve surgery through which surgeons may repair or replace the mitral valve. Both approaches are techniques that prove extremely useful in unique situations, namely surgery in which the left ventricle must be opened, or in cases of aortic valve endocarditis with involvement of the mitral valve. These approaches are well described and offer distinct advantages over traditional left atrial or transseptal exposures.

The transaortic approach to reconstruction of the mitral valve and annulus is ideal in the setting of aortic valve endocarditis, where the full extent of the necessary procedure is not apparent until examined in the operative field. Compared to the traditional atriotomy and aortotomy, the transaortic approach may be preferred when an extensive debridement is performed because three-dimensional visualization of the key relationships necessary for reconstruction is possible through the single exposure. The anterior aspect of the annuloplasty ring can serve as the framework for reconstructing the anterior mitral annulus and utilization of an annuloplasty ring with a curved anterior segment helps re-establish the physiologic shape of the neo-aortomitral junction. This approach is most applicable when mitral valve pathology is limited to the anterior leaflet, with or without involvement of chordae tendineae; however, standard posterior leaflet repair techniques can be performed. The transaortic approach may also be used in situations other than endocarditis. Although this approach is most easily employed through a dilated, elastic aortic annulus, as surgeon experience increases, these anatomic constraints become less of a factor and this approach can even be applied in the setting of bivalvular disease necessitating double valve surgery (6).

Alternative exposures for mitral valve surgery are safe and efficient, and offer distinct advantages over traditional approaches when employed in specific situations. As the complexity of the average cardiovascular surgical patient increases, and as more procedures are performed with minimal access, these alternative approaches may prove increasingly useful. As such, they are valuable assets every surgeon should have in his or her armamentarium.

We thank Beth Croce for her illustrative work and assistance.