We present a case of a 32-year-old female affected by moderate generalized (MGFA Class IIIb) myasthenia gravis (MG) (Figure 1). She presented with ptosis and generalized weakness and fatigue for the past 10 months. Neurological clinical evaluation was suggestive for MG, while electromyography and dosage of circulating acetylcholine receptor antibodies were both positive. There was no previous relevant clinical history. Specific informed consent was approved by the Internal Ethical Committee and was obtained for a left-sided robotic thymectomy. 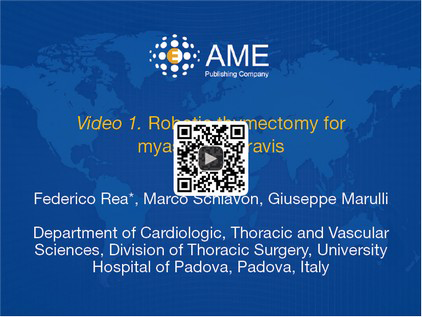 The patient is placed under general anesthesia and a double-lumen endotracheal tube is inserted for selective single lung ventilation. The patient is positioned supine with the left side up, at thirty degrees upon a bean bag. The right arm is placed alongside the body and the left arm is positioned on a support parallel to the bed, allowing for easier exposure of the axillary region.

The surgeon’s console is far from the patient in the operating room and the video tower is situated at the bottom of the bed. The patient-side cart is positioned on the right of the bed, angled at forty-five degrees to the longitudinal axis of the patient. The trocars for the arms of the “Da Vinci” surgical system are placed as follows: the zero degree camera port for the three-dimensional video-endoscope is introduced through a 12-mm incision in the fifth intercostal space in the anterior axillary line; two additional thoracic ports are inserted through two 5-mm incisions: one in the fifth intercostal space between the midclavicular line and the parasternal line and another in the third intercostal space on the anterior axillary line. The arms of the Da Vinci system are then attached to the two ports and another arm is attached to the port-inserted endoscope. The left arm is equipped with an Endo-Wrist that allows grasping the thymus and the perithymic fat tissue during dissection; the right arm is equipped with an Endo-Dissector device with electric cautery function to perform the dissection. During operation, continuous insufflation of carbon dioxide, maintaining an endocavitary pressure ranging from 8 to 12 mmHg, is delivered into the left hemithorax through a dedicated connection system in the camera port.

The dissection starts inferiorly from the fat tissue of the left pericardiophrenic angle. The pleura is incised in the area delimited anteriorly by the mammary vessels and posteriorly by the phrenic nerve. The dissection then follows the pericardial plane, where the left inferior horn and the body of the thymic gland are located. The lower part of the thymus is mobilized upwards and the thymic tissue is dissected from the plane of the pericardium. The isolation proceeds up to into the neck until the superior horns with their fatty tissue are identified and divided from the inferior portion of the thyroid gland by a blunt dissection. Grasping and pulling the superior horns below, the innominate vein is then identified and dissected along its border up to the point where the thymic veins are identified, clipped and divided. On the right side, the dissection involves the retrosternal area, starting medially to the left mammary vessels with the visualization of the right mediastinal pleura that may be opened; the retrosternal fat tissue en-bloc with the right inferior horn of the thymus is subsequently isolated and dissected.

The operation ends with the dissection of the tissue laterally and under the left phrenic nerve: by pulling up the nerve with the Endo-Wrist, paying attention to avoid any nervous damage, the aorto-pulmonary window area is dissected and cleared of fatty tissue. The thymus gland, the mediastinal and the fatty tissue of the neck are then radically resected. The specimen is placed in an Endo-Bag so it can be removed by the incision on the fifth intercostal space after removing the left robotic arm and extending the incision up to 15-mm. After the haemostasis, a 28 French drainage tube is inserted through the wound of the fifth intercostal space, the lung is re-inflated and the other wounds are sutured. The patient is extubated in the operating room and, subsequent to an adequate period of observation, returned to the floor of surgical thoracic ward. The chest drainage tube is removed 24 hours after surgery and the patient is usually discharged 48-72 hours after surgery.

The majority of series on robotic thymectomy for MG reported good results in terms of morbidity/mortality and clinical long term results, comparable with open approaches in term of remission/improvement of symptoms and reduction and suspension of drugs (2-5).

This approach combines the advantages of minimally invasive techniques (fewer complications, minimal thoracic trauma, early improved pulmonary function, a shorter recovery period and optimal cosmetic results) and an excellent view of the anterior mediastinum, so that an extended thymectomy can be performed, similar to that in the transsternal approach. Disadvantages of the standard thoracoscopy include a two-dimensional view of the operative field and the fact that the arms do not articulate, making it difficult to operate in the mediastinum. The development of robotic systems has helped overcome these limitations. The “Da Vinci” robotic system is equipped with a camera device that allows an intuitive, enhanced three-dimensional vision of the operative field. The surgical Endo-Wrist articulates and rotates 360 degrees with seven degrees of freedom, the scale motion with a system for tremor filtering makes more precise the manoeuvres. In our experience, these characteristics improved the surgical dissection, making it easier than conventional video-assisted thoracoscopic surgery, particularly in remote, fixed and difficult to reach areas of the neck and mediastinum. Such features also allowed for the safer and easier dissection of vascular and nervous structures. We prefer the left-sided approach, as it offers a perfect visualization of the aortic window and reduces the probability of phrenic nerve injury, by providing a direct vision of the left phrenic nerve, while the right phrenic nerve is partially protected by the superior vena cava.

The initial high cost of the robotic system is easily recovered if the robotic instrumentation is used in several different surgical specialties, as in our hospital. Another disadvantage of robotic surgery is its current lack of tactile feedback, but this is compensated for by the superior image of the three-dimensional camera. The learning curve associated with robotic technology could be considered a disadvantage, but learning curves are part of any new technology and, in our experience, were associated with increased operative times only in the initial stages.